Behavioural Sciences
The research of Professor Michael Bamberg of Clark University is dedicated to understanding narratives and the dynamics of narratives. His studies outline how dominant narratives emerge and how counter narratives get created and believed. Through the analysis of narrative practices, Professor Bamberg proposes that we can intentionally begin to present stories that enable social change, by looking beyond the story, to uncover and challenge the assumptions behind dominant narratives.

Storytelling is everywhere! We tell stories daily, from the simplest of stories about ordinary happenings to unexpected and unusual tales, and even up to dramatic events that may have life-changing consequences. In the process of telling, we craft the story by constructing characters, describing their actions, and putting the actions into sequences. When we listen to stories, we observe, try to make sense, and react with an evaluative position. We assume, surmise, speculate and place value vis-à-vis storytellers’ intent, and what we believe to be true.

Patriots or insurrectionists?
On 6th of January 2021, millions of people watched a dramatic and unprecedented series of actions unfold on news screens, as Congress sat in session in the Capitol of Washington D.C. to certify the election of Joe Biden. A little further away, a large group of people gathered to hear the outgoing President. He told them how the election had been “stolen” and therefore, their voices had been silenced. He spoke about “reclaiming America’s greatness” and that “you have to show strength and you have to be strong.” Together, he said, they would march “over to the Capitol building to peacefully and patriotically” make their voices heard. He thanked them for their “extraordinary love” of the country.

On 6th of January, an insurrection took place when a mob of Trump supporters gathered outside the Capitol building. These thugs who were outright rioters, “white nationalists” and “supremacists” motivated by hatred and violence, and incited by the outgoing President, broke into the building and threatened Congress.

Our stories are told using words and language habits that often imbue bias about people’s intent or specific actions.

Prof Bamberg explains that typically there is a dominant story (master narrative) that gets told against a background of assumptions which people believe to be true and which they use to make sense of events and of each other. Woven into these assumptions, are normative life experiences and shared meanings. These more dominant narratives with their background assumptions are used to infer the intent behind people’s action, and often are set within cultural, social, and political systems of power (hegemonic norms). From this perspective, the dominant background assumptions made when people tell and listen to stories, can in themselves be quite silencing of other stories that might be told against a different set of background assumptions. These alternate assumptions – when told as counter-narratives – enable a different “truth” to be told and heard, allowing alternate lenses of understanding of the same facts of an event.

Versions of the truth
On the 8th of March 2021, millions of people tuned in to listen to an extraordinary story told to Oprah Winfrey, by Meghan Markle and Prince Harry, the Duchess and Duke of Sussex. They shared intimate stories about racism, emotional abandonment and loss of personal freedom, which the Duchess had endured after marrying into the British Royal Family. Meghan said:
“Life is about storytelling. For us to be able to have storytelling through a truthful lens that is hopefully uplifting is going to be great knowing how many people that can land with and be able to give a voice to a lot of people that are underrepresented and aren’t really heard.”

Describing the press coverage to which she was subjected as a member of the Royal Family, the Duchess explained to Oprah, there was a “racist” element to the press coverage. The next day, on one side of the North Atlantic, an explosive debate about this interview erupted on live television between two presenters on Good Morning Britain. Emotions were high and one of the presenters walked off the show in outrage. He later described the Duchess as valuing her own “version of the truth above the actual truth”. A little later, on the other side of the Atlantic, the Los Angeles Times ran a story about the two presenters, saying that “the two differed in their interpretations of the Duchess of Sussex’s” revelations.

What is a version of truth and which version should we believe? How do we approach the analysis of different stories so that we can make sense of them?

Prof Bamberg says that stories are always linked to “the particular space and time” in which they are told. One way of approaching a story, is therefore to apply a “narrative practice approach” as a way to unpick or analyse a story. In this approach, the focus moves from trying to infer the storytellers’ subjective perspective, to analysing the “ethnographic interactive context” in which the story is told.

Recognising that there is a context in which a story is communicated and that the story itself serves a “social, relational, and situated” purpose for storytellers and their audience, allows a deeper understanding for how to interpret the story. This requires recognising that stories are fluid and dynamic and can be re-scripted and told differently, using the same overarching storyline or sets of facts. 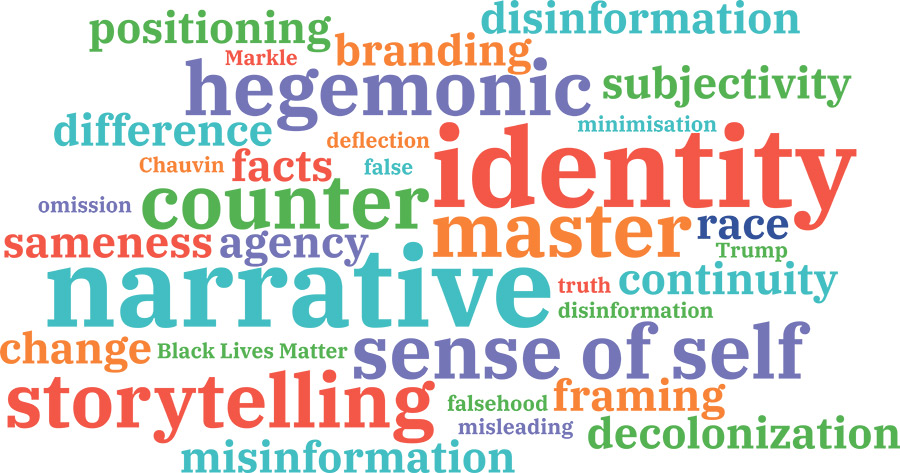 What is plausible? And what is true?
How does an alternate storyline – or anything that counters dominant (and hegemonic) versions – get believed and potentially can replace dominant versions? Professor Bamberg says that presenting a plausible alternative story that challenges dominant and hegemonic assumptions, enables the space for a new understanding of events to emerge. Thus, contributing to better understand how master, counter and hegemonic narratives get constructed, and the contexts in which they are employed, opens up the possibility to create space within which social change can be accomplished through the crafting of counter narrative.

When a story is intentionally crafted and positioned to plausibly challenge the dominant assumptions of power relations and identities, social change can begin to happen.

A good example of crafting a counter narrative is evident in court proceedings when both prosecuting and defence attorneys, present to the judge. As an example, Bamberg presents a detailed analysis of a case of an elderly man who has killed his wife and is on trial for murder. In this, the same way as when Derek Chauvin was on trial, the facts are not disputed: the death of a person has been consequential to the act of the accused. What is on trial, however, is the web of circumstances: the intentions and motives, what happened previous to the killing of George Floyd – up to the ‘fact’ that, in unprecedented ways, other police officers, including the Minneapolis police chief, testified against and denounced another officer’s actions. And if it hadn’t been for the 9 minutes and 29 seconds video by 17-year-old Darnella Frazier that successfully countered the original narrative of the police report, Derek Chauvin might very well still be part of the Minneapolis police force.

Purpose of the story – why this story here-and-now?
The original police statement from May 25, 2020:

Man Dies After Medical Incident During Police Interaction…
He was ordered to step from his car. After he got out, he physically resisted officers. Officers were able to get the suspect into handcuffs and noted he appeared to be suffering medical distress. Officers called for an ambulance. He was transported to Hennepin County Medical Center by ambulance where he died a short time later.

What Bamberg’s examples show is that the framing of a sequence of events is equally, and often probably more, important with regard to make sense of what actually happened. The words and language habits used to frame a sequence of events express assumptions about people’s intent and their motives, imbued with bias and stereotypes that easily sway the audience’s emotions and responses. To be able to account for how this happens, Prof Bamberg suggests that an analytic framework is required that goes beyond what’s been said – a framework that probes more deeply into how it’s been said as well as the wider contextual aspects within which particular narrative framings are situated.

We tell stories to share identities and create relationships with others who share our understandings. We tell stories to position ourselves and influence how people view us. We tell stories to maintain the dominant assumptions within our social groups and to direct outcomes. Our stories are dynamic and fluid, interactive and contextual, told and heard, through different identities and deliberate positionings and negotiations regarding the ‘truth’. Recognising the power of stories in this way, opens up a pathway towards social change. When a story is intentionally crafted and positioned to plausibly challenge the dominant and potentially hegemonic assumptions of power relations and identities, social change can begin to happen. 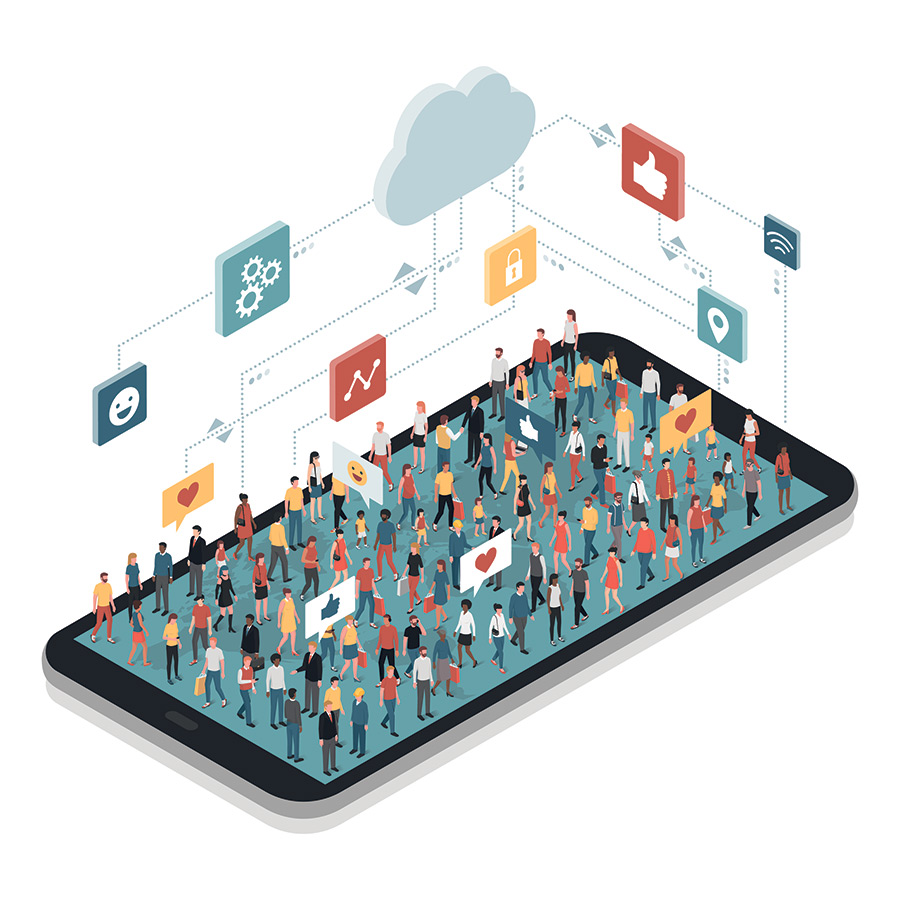 Fake news and fake stories often make the headlines. How can people counter these narratives?

To discern intentionally fabricated narratives (e.g., ‘COVID is a hoax’ or ‘Mexicans are rapists’) from counter narratives that intentionally challenge hegemonic narratives (such as ‘gay-love-is-unnatural’ or ‘non-aryans-are subhumans’) is a matter of analytic rigour. Fact checking, i.e., scrutinising the events that are referred to, will ultimately remain insufficient. What needs to be taken into account is who tells which sequence of events to whom, at which time, and in which context, and for what purpose. I agree that this sounds more complex to a seemingly simple question; but that’s what the narrative practice approach has in store. 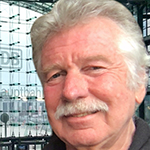 Professor Bamberg’s research explores discourse and identity, with emphasis on how narratives (especially ‘small stories’) are used as general sense-making and identity-building strategies.