Earth & Environment
By now, we all recognise microplastics as a huge problem in our oceans. This awareness peaked when the threat became direct to humans, through the consumption of contaminated marine produce. Unfortunately, the situation is even bleaker than we realised. Dr Pierre Girard from the Federal University of Mato Grosso has discovered microplastics in the remote Brazilian Pantanal, a huge and diverse area of swampland in South America. This not only threatens an important breadth of flora and fauna, but demonstrates the sheer ubiquity of microplastics, and the mounting challenge we face to eradicate them.

The global plastic problem is serious. As we continue to churn out vast quantities of plastic in virtually everything we make, the environment around us is becoming damaged in ways we would never have previously imagined. We’re all too familiar with images of strangled fish, injured seals, and bottle-ridden beaches, but over the last few years a new threat has emerged; one that could be a lot more serious – microplastics.

Microplastics: what we know
If you’re reading this, it’s quite likely you’ve already heard of microplastics. The term refers to any plastic particle smaller than 5mm in length, and they can be found in various forms. They are generally a result of the degradation of larger plastics, although occasionally (as with microbeads) they are manufactured to be that size. Microplastics are an emerging threat to ecosystems as a whole. Due to their small size they could easily pass along the food chain and even end up in human food. Their presence in marine ecosystems can cause hazardous effects on ecological health, and recently a huge amount of awareness has been raised concerning ocean microplastics. But what about riverine systems, wetlands, or even terrestrial areas? 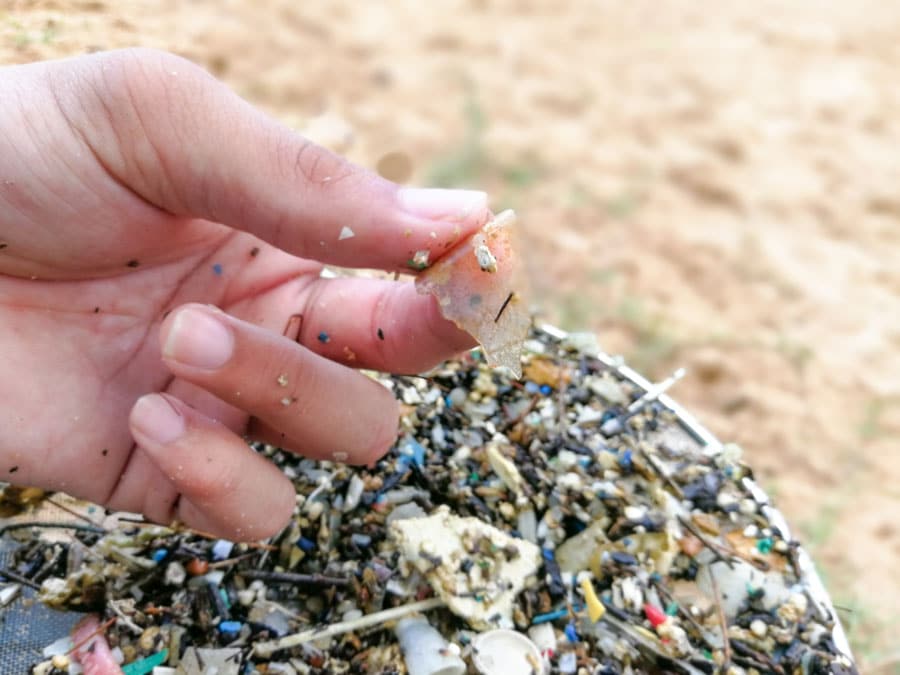 Unsurprisingly, much of the ocean microplastics originate from rivers inland. Historically, settlements are based around rivers and consequently the bulk of plastic waste originates where urban meets water. Not only does this mean that rivers downstream of cities are also highly contaminated with microplastics, but so is any downstream water system they lead to, not just the ocean. Dr Pierre Girard from the Federal University of Mato Grosso in Cuiabá, Brazil, is investigating the presence of microplastics in the South American Pantanal.

Protecting the Pantanal
The Pantanal is a vast and diverse area of wetland larger than England. It lies in Brazil along the border of Paraguay and Bolivia, and floods annually. It supports a huge amount of biodiversity and important ecosystem services. Sadly, despite recognition and protection, the Pantanal is still threatened by anthropogenic disturbance including hydroelectricity, agroindustry, mining and waste dumping. Now microplastics are adding their contribution to this already toxic cocktail.

Despite recognition and protection, the Pantanal is still threatened by anthropogenic disturbance… Now microplastics are adding to this.

One of the main contributors to the Pantanal is the Cuiabá river. Its tributaries flow through the cities of Cuiabá and Várzea Grande – a likely source of plastic pollution. These cities house up to one million inhabitants and only treat approximately 50% of their water. The Cuiabá river then flows through a few smaller settlements before reaching the Pantanal, where flooding peaks in March to April.

In order to present microplastics as a significant threat to the Pantanal, and thus the services and wildlife it supports, Dr Girard quantified and classified the microplastic presence in the area. The team decided to sample in both the urban tributaries of the Cuiabá, and the Pantanal itself. They used a plankton net (one with a 68μm mesh size), a method that capture more microplastics than the commonly used neuston net. Samples were filtered back in the lab, examined under a microscope, and categorised. Since it’s easy to cross contaminate something as small as microplastics, the team were meticulous to minimise the presence of plastic items during this process. They even quantified the atmospheric microplastic levels in the lab, which was concluded to be very low.

All shapes and sizes
The concentrations were quantified as n100L-1 (for example, ‘8’ would mean 8 pieces per 100 litres of water). The average concentration was 9.6 which was within the range of other riverine recordings across the world (although this is a large range). As expected, the concentration in Cuiabá was four times higher than in the Pantanal with an average of 19.9. Again, this increase in concentration proximal to urbanisation was mirrored in similar studies across the globe.

Another important measurement was the type and size of the microplastics. Half of all particles were fibres, the rest being fragments (19%), spherical pellets (22%) and closed-cell extruded polystyrene foam (XPS) (9%). The size of these particles did not vary much between the urban areas, and the Pantanal, with the average size being 192μm.

Fibres are evidently the most serious issue in this region. They mostly originate from synthetic clothing and fishing gear, which are degraded during use and washing. Although these are higher in urbanised areas, fibres are the most ubiquitous form of microplastic and will be an important research area in the future.

There were virtually no large microbead pellets found (common in beauty products), which suggested that most of the pellets came from industrial sources instead. Interestingly, in the Pantanal, there were 60 times fewer pellets. This is likely due to the lack of large industry, and also gives an idea of the plastic transport capabilities of the river. Although fibres also showed a decrease, the amount was only 2.6 times lower – likely due to the presence of local fishing or washing depositing fibres in the Pantanal floodplain, rather than increased transport.

This reinforces one of the most dangerous aspect of microplastics: their ability to readily traverse the food web – a question that is still hotly debated in the scientific literature.

The decrease in microplastic concentration away from urban areas could be due to particles becoming retained by river sediments. They may also be deposited on land after periods of flooding, drought, or decreased water flow velocity. In fact, several studies have recorded the presence of microplastics on riverbanks and dry floodplains in Brazil and Switzerland. It’s also understood that certain shapes and sizes of particle are more susceptible to transport – further research in this area might help us effectively target particular plastics. 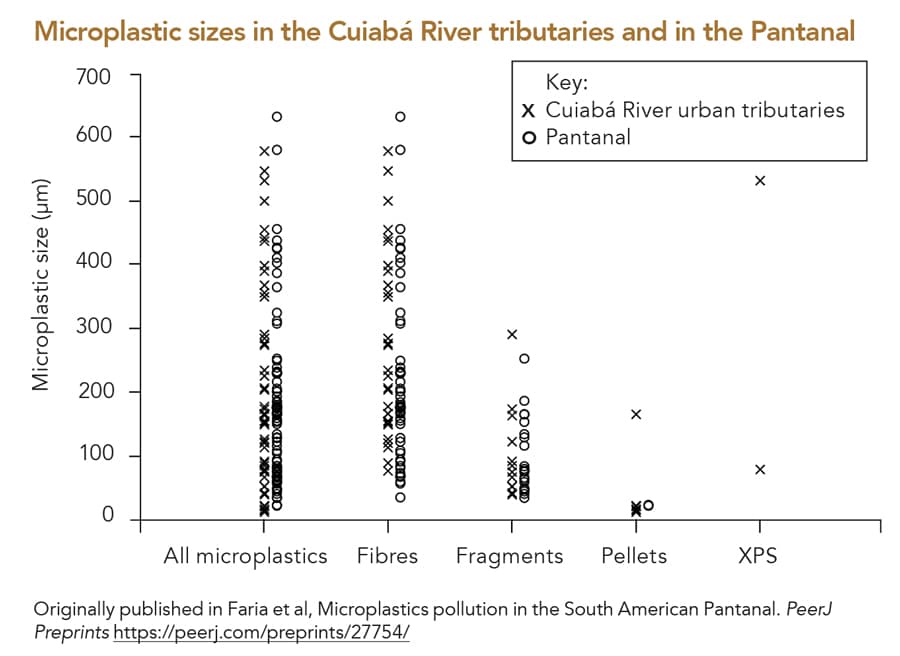 Preventing plastic pollution
It is clear that microplastics have managed to permeate almost all aquatic systems on the globe. Despite a lower concentration moving away from the plastic source, transportation of microplastics is occurring and will continue unless the plastic problem is addressed. Dr Girard hopes to expand his research and sampling across the Pantanal, covering more land types and even terrestrial areas.

Preliminary studies have also looked at uptake of microplastics in bivalves, a group of filter feeders at the base of the food web. Research has shown that not only do these animals uptake microplastics, but they deposit it on the aquatic substrate (the material on the riverbed, e.g., soil or gravel) during egestion. This likely leads to contamination of benthic or bottom feeders, and also predators of the bivalves themselves. This reinforces one of the most dangerous aspect of microplastics: their ability to readily traverse the food web – a question that is still hotly debated in the scientific literature.

After expanding his research study area and sampling sites, Dr Girard will start to look closely at the relationship and uptake of microplastics in aquatic organisms. Provided there is suitable and sufficient evidence for both abundance and threat of microplastics, a strong case can be put forward to policy makers looking to make a serious intervention in this region. Microplastics risk not only decreasing the water quality of this pristine and unique habitat but contaminating much of its biodiversity. Such is the reliance of human livelihood and ecosystem services on the Pantanal, that this is also a health and economic issue that must be rapidly addressed. 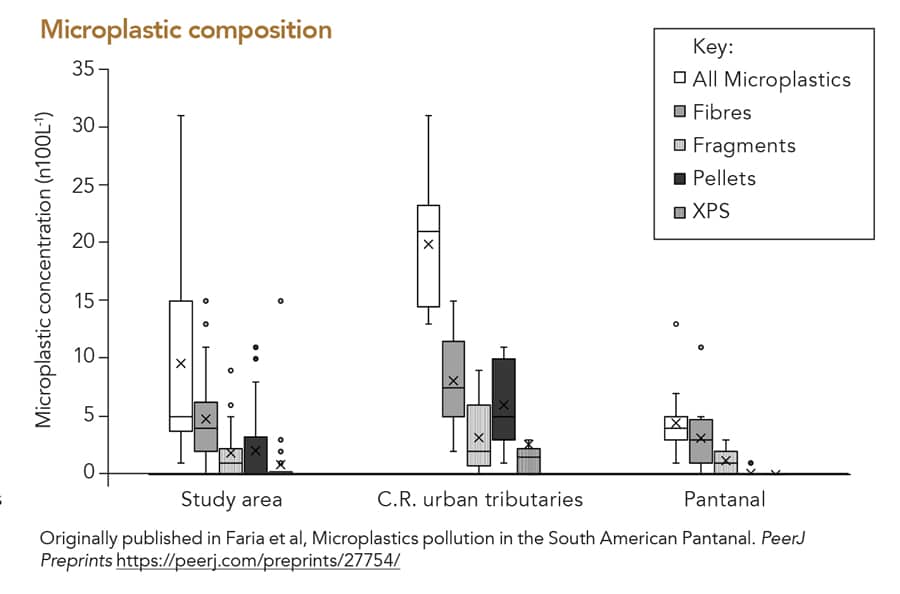 How long is it expected to take before an intervention can be made, and what might it be?

<> Reducing plastic use is “the” answer to plastic pollution everywhere in the world. In the Pantanal area this is unlikely to occur in the next decade, if left to governments and industry initiative. Sewage treatment systems specific to microplastic removal are being researched, but even if they were to become available tomorrow, untreated sewage is a structural question unlikely to be resolved in Brazil and the Pantanal anywhere soon. Activism to raise public awareness and pressure governments and businesses to reduce plastic production and use is the most rapid form of intervention.

Microplastics pollution in the Pantanal was last modified: March 5th, 2020 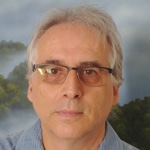 Pierre Girard is a Canadian living in Brazil. He teaches at the Federal University of Mato Grosso in Cuiabá and has dedicated his research to the Pantanal. He has published papers on the Pantanal water dynamics including hydropower impacts, climate change and now microplastic pollution in the Pantanal wetlands.

How different are you and your significant other from a spider couple?
Community Content
Read This Article
Technological leapfrogging the global energy crisis: How can changing the role of science in developing countries help with an oncoming climate catastrophe?
Physical Sciences
Read This Article