Earth & Environment
It is well known that natural surface waters have become contaminated with microplastics. However, it is not yet understood how these pollutants impact aquatic organisms. Professor Julie Peller at Valparaiso University, Indiana, has investigated the distribution of microplastics in the North American Great Lakes and found that synthetic microfibres are, on average, a thousand times more abundant on aquatic vegetation than in the water or the watershed sediment. In particular, these microfibres cling to fresh algae strong enough to remain attached when agitated mechanically. Her findings suggest that organisms that feed on aquatic vegetation are likely to ingest many synthetic microfibres.

The natural surface waters of the Earth, such as lakes, rivers, seas and oceans, have been contaminated by non-biodegradable microplastics (pieces of plastic less than 5mm in size). The most abundant class of microplastic pollutants are synthetic microfibres. These are released daily from commonly used textiles (clothing made from polyester, polypropylene, nylon and acrylic) in washing machines into the wastewater. Most of the microfibres are removed at wastewater treatment plants, but a small percentage remain in the water and hence pollute the environment. Current estimates from the Switzerland-based International Union for Conservation of Nature and Natural Resources are that more than half a million metric tons of synthetic microfibres enter the ocean annually.

Scientific studies are demonstrating that synthetic microfibres are harmful to fish and other aquatic organisms. However, the processes by which the microfibres enter the diets of marine wildlife are not fully understood. This article will give an outline of research conducted by Professor Julie Peller of Valparaiso University and her collaborators into the transport, fate and effects of microplastics in the Great Lakes of the USA.

The number of microfibres collected from algae were about a thousand times greater than the amounts found in water and sediment samples.

Professor Peller and her team were particularly interested in the abundance and distribution of microplastics in Lake Michigan and Lake Erie within US territory. They also investigated how microplastics enter Lake Michigan from the part of the watershed based in Indiana known as the Salt Creek Watershed.

The Salt Creek Watershed study
Professor Peller’s team collected samples of surface water in the vicinity of wastewater treatment plants. Since many microplastics, such as polyester, are denser than water, they tend to settle in the sediment (the bed of the stream or river). Thus, it was necessary to collect sediment samples as well, to understand the distribution and fate of the synthetic microfibres.

Since sewage sludge from wastewater treatment plants is potentially used as fertiliser in farm fields, it is possible that microplastics present in agriculture runoff contaminate Lake Michigan. Professor Peller investigated this hypothesis by collecting samples upstream and downstream from the wastewater treatment plants. Dried microplastics on land and in sediment can become dispersed in the air; therefore, the team also collected air samples.

The samples were filtered to remove particles larger than 5mm. Then, the reactive, natural organic matter was removed by chemical oxidation. This was accomplished by exposing the samples to the Fenton reagent, a solution of hydrogen peroxide and iron (II) chloride. In the next step, the mixture was again filtered, and the recovered solid was analysed for microfibres using a stereomicroscope. The identity of the microfibres was also confirmed using infrared and Raman spectroscopy (a chemical analysis technique). 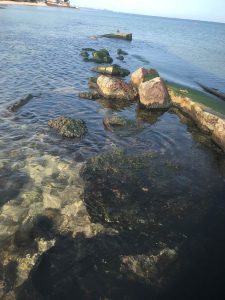 Cladophora growth on hard surfaces along the southern shoreline of Lake Michigan.

Their research showed that the amount of microfibres found in the samples collected closer to the wastewater treatment plant and the samples collected further away (and presumably not affected by household sewage) were similar. This finding suggested that wastewater treatment plants are not the only source of microplastic pollution for Lake Michigan.

The team used their data to estimate that approximately 50,000 synthetic fibres are carried through the Salt Creek Watershed every second, ie, roughly four billion plastic fibres are transported each day.

Great Lakes algae study
In a separate study, Professor Peller’s team investigated the fate of the microplastics entering Lake Michigan and Lake Erie, including the interactions of the synthetic microfibres with aquatic vegetation. They took a particular interest in the abundance of microplastics in the green macroalga (seaweed) Cladophora, which plays a prominent role in the Great Lakes ecosystem and is the most widespread macroalga globally.

The analysis of the entire dataset is underway to determine if the number of microfibres bound to the algae varies based on the location of the algae, the extent to which the algae is submerged in water, and the time of the year, among other parameters. 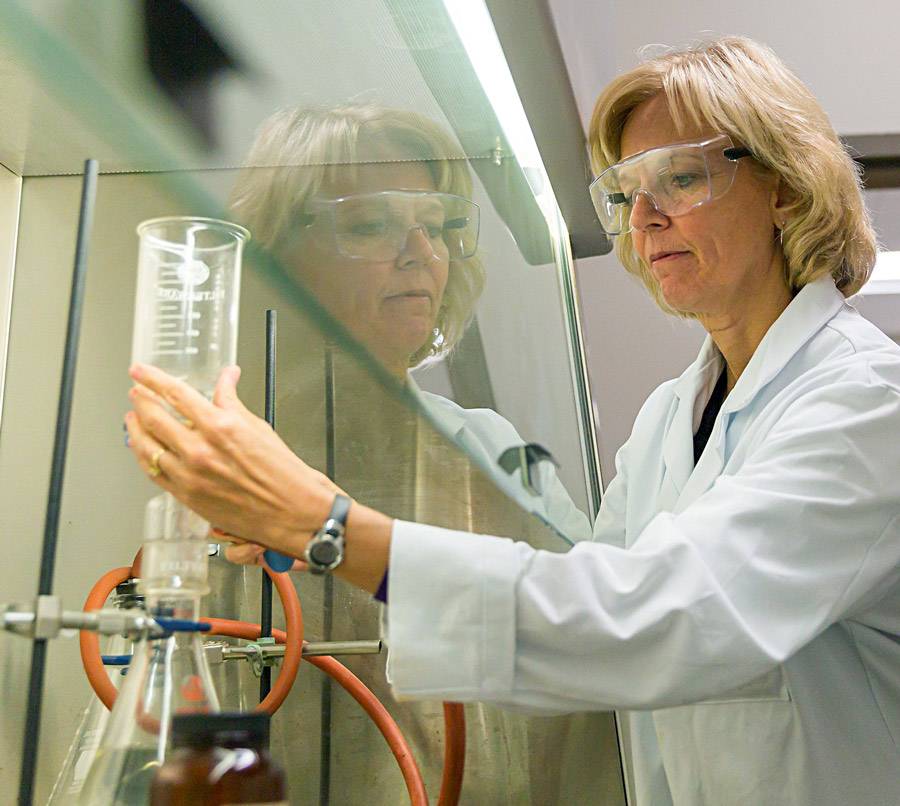 To determine how the algae and other plants in the lake effectively collect microplastics, the researchers analysed the interactions between plants and microfibres, including the behaviour of microfibres in the presence of fresh and aged algae. With fresh algae, the microfibres cling to the plant cell walls strong enough that they remain attached when subjected to mechanical agitation. This interaction subsides for decayed algae, indicating that during the seasonal die-off of algae, microfibres are mostly released into the surroundings.

The ability of algae to collect microfibres may offer insights into potential remediation strategies or methods to reduce the input of these pollutants into surface waters.

Professor Peller has suggested that the strong binding of synthetic microfibres to Cladophora is a consequence of the high surface area and the high carbohydrate content of the Cladophora cell walls. Indeed, the team cites previous studies which provide evidence of strong electrostatic forces and other interactions between polysaccharides (carbohydrate polymers) and microplastics.

These findings suggest that organisms that feed on algae and other submerged plant matter are likely ingesting many microscopic synthetic microfibres which continue to enter surface water daily. There is also the risk that these microplastics may enter humans through, for example, the consumption of fish or algae. 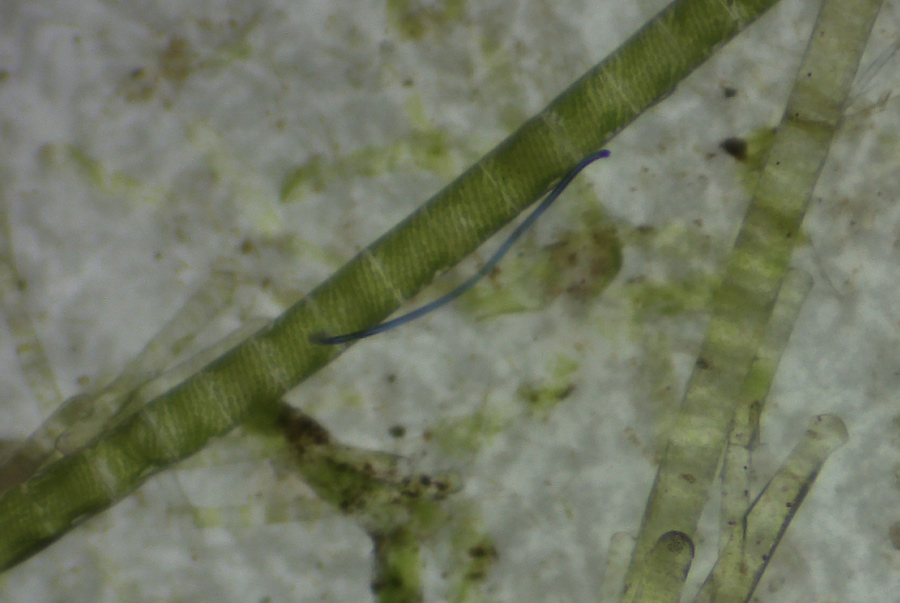 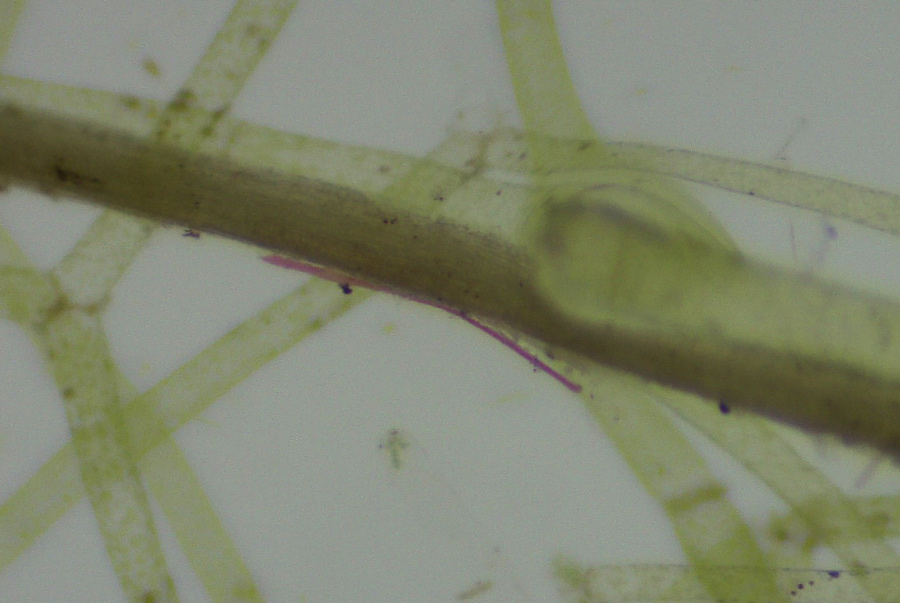 Professor Peller regards her finding that microplastics bind to algae as an opportunity. She considers that the ability of the plants to collect these pollutants may offer insights into potential remediation strategies or methods to reduce the continual input of these plastic pollutants into surface waters.

Conclusions
Professor Peller, her team from Valparaiso University, and collaborators from the USGS Great Lakes Science Center, Renishaw Inc, and Rutgers University, have demonstrated that the extent of microplastic pollution of the North American Great Lakes has likely been underestimated in previous studies given the amount found in submerged plants. Their findings have shown that significant amounts of microplastics originate daily from the Salt Creek Watershed, much from the washing of clothes, but also from other sources, which may include farm field run-off.

Importantly, her team has demonstrated that algae and other aquatic vegetation can sequester microplastics. Indeed, on average algae samples afforded about a thousand times more microfibres than were found in water and sediment samples. This new knowledge of the binding of synthetic microfibres to plant cells may lead to solutions to this environmental problem. 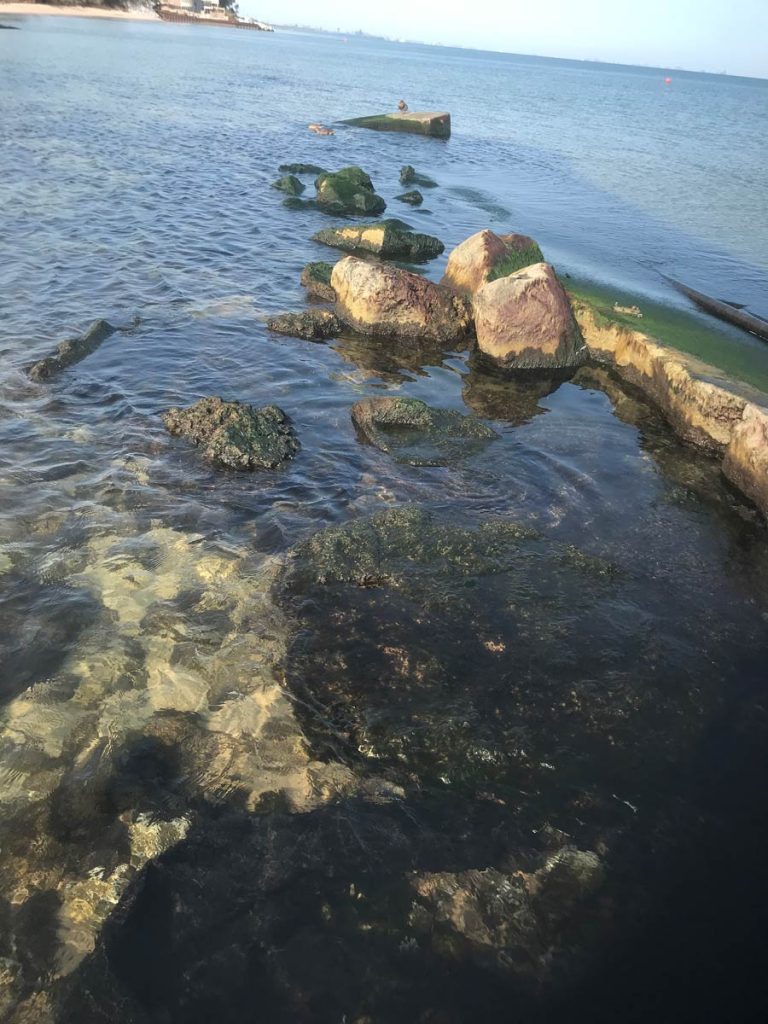 What are the next steps in your research?

Since we recognise that microplastics are bound to submerged aquatic vegetation during the months that these plants flourish, we are interested in determining the fate of the synthetic microfibres upon plant decomposition. Therefore, we are sampling nearby sediment, which will be processed and analysed in the lab to determine if the microfibres collected by the algae eventually settle on the lake bottom. We are also intrigued by the plant–microplastics interactions and are planning experiments that will offer more details on these interactions.

Can algae be used in wastewater treatment plants to sequester microplastics?

It seems that one way to reduce the discharge of synthetic microfibres and other microplastics into surface waters is to employ an additional processing step in wastewater treatment. Based on our study, we speculate that passing the treated wastewater over algae may be a fairly simple way to collect most of the microplastics that remain in the final effluent. While this requires additional investigations, it seems plausible. 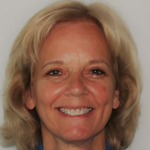 Dr Julie Peller is a professor of chemistry at Valparaiso University in Valparaiso, Indiana. She received her PhD in organic chemistry from the University of Notre Dame. Her main areas of research are organic contaminants in water environments, their distribution, behaviour and fate; advanced oxidation for the remediation of water contaminants; and air and water pollution studies in the context of environmental justice.