Physical Sciences
Over the last century, technological advances have resulted in increased length of the main span of long-span suspension bridges, making them even more vulnerable to structural vibrations caused by environmental factors, particularly wind. Dr Ibuki Kusano from the University of Stavanger, Norway, and her collaborators are investigating the structural response of suspension bridges under wind loads. The research team has adapted a multi-fidelity surrogate modelling method that alleviates the high computational costs of Computational Fluid Dynamics simulations. Application of this new method on a suspension bridge deck in Norway have shown it to be both feasible and efficient.

Efficient transport systems are essential to our society from both economic growth and social interaction perspectives. Suspension bridges have been constructed to connect communities across large physical obstacles since the 1800s, with many, including the Brooklyn Bridge in New York and the Golden Gate Bridge in San Francisco, achieving iconic status.

Over the last century, technological advances have resulted in increased length of the main span of long-span suspension bridges. The traffic circulates on the bridge deck, which is suspended by vertical hanger cables attached to larger main cables that are supported by two high towers. This puts long-span suspension bridges among the most challenging structures in civil engineering. These large flexible structures are vulnerable to structural vibrations caused by environmental factors, particularly wind. Dr Ibuki Kusano, a Marie Curie research fellow at the University of Stavanger in Norway, and her collaborators are investigating the structural response of suspension bridges under wind loads. 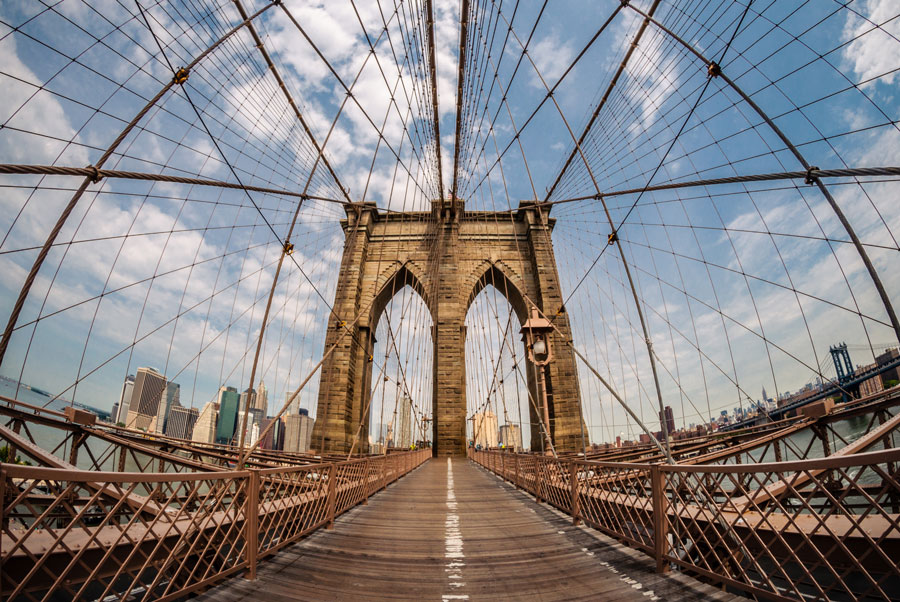 Wind-induced phenomena
Dr Kusano explains how suspension bridges’ flexibility makes them susceptible to wind-caused vibrations, a fundamental consideration for their design. One of the most serious wind-induced phenomena is flutter, an aerodynamic instability that can cause a suspension bridge to collapse. The spectacular failure of the Tacoma Narrows Bridge, which collapsed only months after its completion in 1940, is a well-known example of this phenomenon. Another significant wind-induced vibration is buffeting, which is caused by turbulence in natural wind, influenced by the surrounding topography. A bridge structure has to resist both the extreme and the repeated loads due to wind (turbulence).

Computational Fluid Dynamics simulations can determine drag, lift and moment coefficients of a particular deck section. These aerodynamic parameters provide information regarding the wind forces acting on a bridge deck and are dependent on the shape and dimensions of the deck as well as the wind angle and speed. 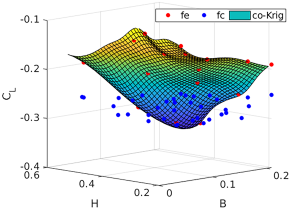 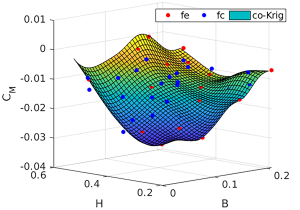 Figure 1: Lift and moment (top and bottom figures) coefficient co-Kriging surfaces plotted with respect to the shape parameters of B and H. B denotes the relative width and H is the relative position of the leading/trailing edge.

The most serious wind-induced phenomena is flutter, an aerodynamic instability that can cause a suspension bridge to collapse.

Dr Kusano explains low-fidelity models are used to predict the tendency of aerodynamic coefficients with respect to the shape design variables where the appropriate high-fidelity data is lacking. This enables the computation of accurate estimates for the aerodynamic coefficients of a particular deck (surface) shape, facilitating the analyses of the bridge performance for both flutter and buffeting phenomena. Once the research team has defined the performance of the bridge under wind load for each individual deck shape, they perform design optimisation of the bridge deck.

Design optimisation
An optimisation problem involves the determination of size or shape parameters (design variables) in order to minimise the structural weight (objective function) under given constraints.

Design optimisation involves a logical process of determining the design variables required to minimise the objective function while still satisfying given constraints. In the case of suspension bridge design, the aim is to minimise the weight of the steel used (the objective function) in the construction of the bridge deck and the constraints are the structural requirements which include the wind-caused vibrations computed using the investigated multi-fidelity method. Dr Kusano adds that “design optimisation is becoming more and more popular in industries as sustainable development is required without harming future generations’ needs.”

Crossing the Julsundet Fjord
Dr Kusano and her collaborators have applied their innovative shape optimisation method to the design of a suspension bridge deck that is planned to cross the Julsundet Fjord in Norway as a study case. This suspension bridge has a main span of 1.6 km. The deck section is 32 m wide with a 4 m high aerodynamic box girder forming a closed steel box.

The research team constructed 4D co-Kriging surrogate surfaces of the aerodynamic force coefficients for several deck shapes, using both high and low-fidelity Computational Fluid Dynamics models. Kriging essentially predicts the value of a function at a specific point by computing a weighted average of the known values in the neighbourhood of the point, similar to regression analysis. Co-Kriging extends the Kriging method with the use of covariances and can construct an expensive function based on few expensive and many inexpensive, readily available data. 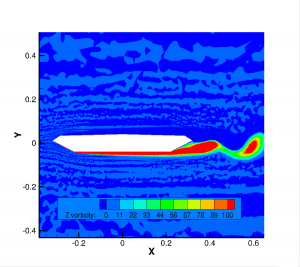 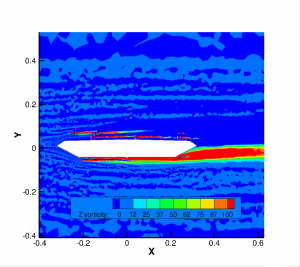 Figure 2: Vorticity plots for the bare deck and the section fitted with vortex mitigating devices (right). Vortices observed in the top figure disappear for using the devices in the right-hand figure.

The Computational Fluid Dynamics models incorporate detailed geometry of railings and vortex mitigating devices, such as guide vanes, that can alter the flow field around the deck and significantly affect the bridge’s aerodynamic performance (see figure 2).

Flutter computation
Testing every possible deck section during the optimisation process is impractical, so a fully numerical flutter computation is used to optimise the shape of the bridge deck. The flutter wind speed is determined via a multi-modal response analysis for the particular bridge deck geometries under consideration. The aeroelastic forces acting on the bridge deck are estimated based on the force coefficients from the co-Kriging models.

Having constructed the surrogate models of the force coefficients, the researchers carried out the shape optimisation of the suspension bridge deck. The objective function was to maximise the flutter speed and the buffeting performance. Deck shape was modified by symmetrically moving the leading and trailing edges in both the horizontal and vertical directions. The constraint functions set the design limits as well as other deterministic structural limits.

Evaluation
The research team compared the results from their multi-fidelity surrogate modelling method with those from high-fidelity Computational Fluid Dynamics models. This comparison revealed that multi-fidelity surrogate modelling method maintains accuracy while reducing the computational cost. Dr Kusano and her collaborators emphasise that in order to estimate the force coefficients accurately, it is essential to include detailed deck geometry of all railings and aerodynamic appendices for the high-fidelity models.

When compared with an approach that uses only high-fidelity function evaluations, this method proved to be both feasible and efficient. This research provides a methodology that will inform the designs of sustainable bridges and deliver efficient transport construction.

Dr Kusano was due to present this research at the 9th International Colloquium on Bluff Body Aerodynamics and Applications University of Birmingham, UK in July 2020. Unfortunately, this conference was cancelled due to Covid-19.

What initially sparked your interest in suspension bridges?

<> I was fascinated by suspension bridges when I was young since several suspension bridges were constructed in the 1980s and 90s in Japan. I admired the tall massive towers and large steel structures, but at the same time, they seemed so elegant and integrated into the surrounding landscape. I especially adore the Akashi Kaikyo Bridge in Kobe, Japan, which still holds the world record in the main span length. Bridges also symbolise connections between communities. I hope the construction of a bridge not only improves the local economy but also brings us closer together for better understanding of one another. 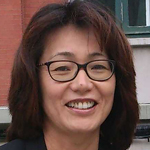 Dr Kusano is studying the design optimisation of suspension bridges under wind loads based on Computational Fluid Dynamics simulations.