Machine learning techniques allow a computer to essentially ‘learn’ from data and provide future predictions from that data in a way that outperforms humans by far. Machine learning techniques typically use a range of different algorithms to analyse so-called training data to create a computational model of the process under investigation. The model is then used to make predictions about future performance.

The predictive process is often complicated by the presence of seasonal fluctuations in the data, which need to be taken into account when undertaking analysis. Datasets focusing on a single feature as a function of time, with seasonal fluctuations, are known as seasonal univariate time series. An example is the pricing of electricity.

Dr Michael Thrun and his colleagues, Tino Gehlert and Quirin Stier, have worked on a so-called multiresolution forecasting framework, which enables researchers to swiftly apply an automated algorithm to recognise complex and changing patterns in the data and produce forecasts.

Why is this new?
Previously, time series have been analysed using a variety of methods, including Fourier analysis. A Fourier transform is a mathematical operation used to decompose a time series into a function of frequency. This analysis can be used to analyse frequencies in a time series, but it is not an ideal method for taking varying seasonality into account. Nevertheless, it can provide a good analysis of series with regular seasonality throughout the time period under investigation. Dr Thrun and colleagues investigated wavelet-based methods, which allows for more precision. While the Fourier transform creates a representation of a time series in the frequency domain independent of the point in time (e.g., date), wavelet-based methods create a representation of the time series in both the time and frequency domain, thereby allowing efficient access of localised information about the time series at each point in time. Figure 1 outlines the difference between the three domains.

Another major advantage of this new method is that by using an algorithm borrowed from nature (“evolutionary optimization”) there is no need to set parameters – numeric values of methods that require fine-tuning to achieve a high forecasting quality. This makes it easier to apply because any operator can use the method right away.

The wavelet decomposition methods tendentially outperform in terms of forecasting accuracy the results of other state of the art statistical and machine learning techniques that are typically used for the task of forecasting. The method finds the complex patterns in the data automatically through a highly optimised search strategy. Once an optimal model is found, it can be used regularly as new data comes in to support decision making.

The electricity demand dataset covers daily usage in Germany between 2006 and 2015. Since electricity use is strongly seasonal, it would be expected to respond well to Fourier analysis. Another covers hourly prices for each Scandinavian country from 2013 to 2016. By contrast, this dataset has varying seasonal components because electricity prices exhibit varying seasonality on daily, weekly and annual levels as well as unanticipated price spikes.

The stocks dataset contains stock prices for American Airlines from 2013 to 2017. Stock prices are presumed to depend largely on externalities and would be difficult to predict based solely on a time series of past prices. The call centre data is the number of issues in a single call centre per day between 2013 and 2018. This dataset also has strong seasonal components and would be expected to be predicted accurately by a Fourier approach.

For the call centre dataset, the two multiresolution methods with neural networks outperform every other method. The only other method performing better than the naïve seasonal method for more than one time step into the future (known as the first horizon) is Prophet (the Fourier method).

In contrast, using only the last observed value for prediction for the stocks dataset surpasses more sophisticated forecast methods that seek seasonality in data with no present patterns.

Although predictions for the electricity prices dataset with multiresolution methods result in a lower error with less variance compared to other methods, on average, no significant improvement to naïve forecast could be demonstrated. The reason lies behind individual spikes occurring individually in the time series, which depend on external information.

What is the significance of these results?
This work applies the wavelet method to industrial tasks making use of automation and avoiding the need to set any parameters, and provides a comparison of performance with state-of-the art methods. The presented multiresolution method is appropriate for seasonal forecasting and performs equally well or better than the current state-of-the-art methods.
For longer term forecasts, the multiresolution methods, including one of the two wavelet methods, outperform almost every other method on the electricity prices, electricity usage and call centre data, and perform as well as expected on the stocks dataset since stock prices are more affected by external factors.

The results show that the multiresolution methods perform better than Fourier analysis overall.

For short term forecasting, combining wavelet techniques with advanced neural networks – a technique often used in machine learning which is inspired by the structure of the brain – resulted in considerably better results. Dr Thrun and colleagues suggest that more complex wavelets could also be considered in the future to potentially further improve forecasting techniques.

What future improvements do you anticipate when it comes to forecasting techniques? 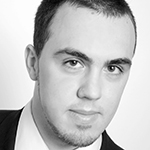 Dr Thrun received his diploma in Physics (2014) and his doctorate in Data Science (2017) at the Philipps-University Marburg under the chair of Databionics under Professor Dr habil. Alfred H.G. Ultsch. Afterward, he worked for almost two years as a Big Data Scientist for an international manufacturer. He is the author of the book Projection-Based Clustering through Self-Organization and Swarm Intelligence and specialises in methods for grouping data, predicting time series, explainable artificial intelligence, and algorithms analysing data that are borrowed from nature. Additionally, he is researching the topic of recognising and explaining diseases based on patient’s data with a cumulative habilitation under review.