Health & Medicine
Dr. Darin T. Okuda is a clinician-scientist and professor of Neurology and Neurotherapeutics at the University of Texas Southwestern Medical Center in Dallas. Dr. Okuda strives to transform healthcare by developing new diagnostic tools that challenge current clinical practices. His research group recently designed a novel method to visualise brain tumours in three-dimension (3D). This latest research aims to revolutionise the evaluation and management of patients with glioblastoma multiforme (GBM).

Glioblastoma multiforme (GBM) is a destructive and fast-growing brain cancer. It is the most common cancerous brain tumour in adults and with a five-year survival rate of just 5%, the outlook for patients with GBM is poor. Current treatments for GBM include surgery for tumour removal followed by chemotherapy and radiotherapy. To monitor the effectiveness of these treatments, clinicians rely on imaging the tumour and observing changes over time.

Currently, the gold standard imaging technique is two-dimensional (2D) magnetic resonance imaging (MRI). However, this 2D imaging method has many problems when managing patient treatment. With the available technology it is hard for healthcare professionals to know if the treatment needs changing, if the tumour is worsening or if the treatment is effective. Dr. Okuda’s laboratory designed a more advanced three-dimensional (3D) imaging technique enabling clinicians to observe tumours more clearly.

Holding us back
Studying the brain is notoriously difficult as access to the brain is very tricky – especially when trying to study the brains of living subjects. Different imaging techniques have been designed to help scientists peek inside the brain; one of these is 2D MRI. This technique is useful for imaging tumours like GBM. These 2D MR images are currently used to help healthcare providers monitor the effects of treatments on tumours.

During MRI, a chemical called gadolinium is injected into the body to enhance and improve the visualisation and understanding of how leaky blood vessels are. Clinicians use these images to monitor GBM development. Currently it is accepted amongst healthcare professionals that an increase in the MRI contrast signal, known as a contrast enhancement, suggests tumour growth.

This sounds simple – when the contrast enhancement increases, the tumour is getting bigger. Unfortunately, it is not that easy to interpret what is going on in a 2D MRI; there are important limitations to take into account. Treatment for GBM, such as radiotherapy, can cause an increase in the contrast enhancement on the MRI. This phenomenon is known as pseudoprogression and it is often indistinguishable from tumour growth. This makes it very difficult for clinicians to understand the true nature of the tumour and provide the best treatment for their patients.

In order to treat GBM patients effectively, it is vital that tumour growth be viewed accurately. These 2D forced perspective MRIs limit the understanding of tumour growth and fail to reveal the complexity of the tumour, specifically the shape and texture. Dr. Okuda’s laboratory has developed novel software to help uncover the true characteristics of GBM tumours.

The contrast is clear between 2D MRI (left), the initial 3D image (centre) and data from the coverage analysis (far right). The patient in the top row exhibits 3D coverage data highly suggestive of tumour progression. Note how much more informative the 3D data are in comparison to that provided with 2D MRI.

Seeing things differently
Dr. Okuda’s research group was able to reveal 3D spatial, structural and surface features of GBM using a novel approach. In a recent study, fifteen patients were recruited and divided into two groups: 1) clinically stable without new or worsening neurological symptoms and 2) patients with new or worsening neurological symptoms unattenuated by steroid treatment whose combined symptoms and MRI changes warranted a change in their established treatment plan. Each patient had MRI scans and the resulting 3D images were studied and the two groups compared. The researchers started by investigating the most active region of the tumour, the contrast enhanced region.

The software that Dr. Okuda’s group developed allowed in-depth analysis of the contrast enhanced region to reveal details about the tumours in a way that had never been seen before. The innovative software was not only able to effectively isolate the contrast enhanced portion of the tumour, but it was able to edit the acquired images in 3D, an aspect not previously available with other platforms. Three different approaches were used to study the acquired 3D files.

A technique known as ‘principle component analysis’ was used to understand more about the shape of the tumour. The outer shell of the tumour’s active region was analysed and the distance along three different axes was studied to reveal the tumour’s sphericity. The researchers predicted tumours which were getting worse would be more spherical in shape compared to stable tumours.

The researchers used ‘medial axis transformation’ to determine if the thickness of the contrast enhanced outer shell was different between clinical groups. In patients with stable tumours, the thickness of the shell was found to be more evenly spread compared to worsening tumours. The shells also tended to be thinner than in those patients with tumour growth. Scientists are still trying to understand whether the width of the shell changes during tumour growth – more research would be needed to clarify this. Dr. Okuda’s research group suggests that monitoring individual patients over time may be more meaningful when looking at outer shell width during disease progression. This new technology could help healthcare providers understand more about how their patient’s tumour changes over time.

‘Coverage analysis’ was used to identify the number of holes in the tumour’s contrast enhanced outer shell. The relationship between the inner and outer surfaces of the tumour were studied to understand the integrity of this region. The researchers found that in patients with worsening tumours there were fewer holes in the outer shell compared to those with stable tumours. The research group had expected to see this in a growing tumour because with nothing to prevent tumour growth, the cells migrate outwards resulting in a more spherical, fuller shape with less holes.

In combination, these three analysis techniques bring together a 3D picture of a tumour’s shape and texture. The 3D data was able to provide much more thorough information than the conventional 2D images. Furthermore, the researchers were able to show that the changes in 3D spatial, structural and surface features correlated with the clinical status of the tumour. This 3D morphological data provides a vital tool in monitoring tumour progression in patients in order to provide better treatment.

What next?
This emerging 3D technology provides new hope for GBM patients. The 3D view of the tumour extends way beyond the traditional, constrained 2D images and provides more dynamic and comprehensive information about the tumour. This 3D technology will allow healthcare providers to gain new insights into tumour progression and gain a greater understanding of tumour advancement based on shape, texture and structural patterns. This will aid better management of patients and any changes in treatment to occur more efficiently.

This 3D morphological data provides a vital tool in monitoring tumour progression in patients in order to
provide better treatment.

For clinicians and patients, being able to distinguish between pseudoprogression and true tumour progression is key. The technology could also be used to monitor the effectiveness of various treatments such as immune-based therapeutic strategies which harness the immune system to fight cancerous tumours. While immunotherapy is well established for some cancers, it is still being evaluated for the treatment of GBM. It is possible that this 3D technology could play a part in evaluating the therapeutic effect of such treatments.

Not only is this 3D technology useful in monitoring tumours and treatment of the patient but it may also be a useful tool for patient education. These 3D computer simulations of the tumour could be printed to create a 3D model. The patient could then see the exact size and shape of the tumour: this is much more tangible than viewing a series of 2D images. The acquired 3D files may also be used with augmented and virtual reality platforms.

Dr. Okuda’s research group is currently conducting studies using larger patient groups to confirm their findings and ultimately aim to measure the impact of their findings on patient care. The group also hopes to use 3D data to identify disease progression before symptoms manifest in patients by leveraging machine and deep learning techniques. These efforts extend beyond the current routine disease surveillance measures and their methodology may one day be systematically applied to the management of all GBM patients in the near future.

What difference will this make to brain tumour treatment from a patient perspective?
<>Our work allows for patients to be better educated on their condition as the acquired 3D images and models from tumours are immediately intuitive. This approach surpasses education that is provided with current 2D MRI views on a computer screen. These techniques, once confirmed in larger groups, will allow for the earlier recognition of tumour advancement as compared to treatment effects, the prevention of unnecessary neurosurgical procedures from being performed, and for treatment changes to occur more quickly. In addition, our 3D approach provides a more eloquent platform that may quickly inform on the value of new and novel GBM treatments for our patients.

New 3D technology to help in the battle against brain tumours was last modified: January 11th, 2019 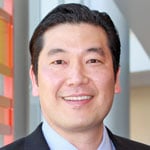 Dr. Okuda is a clinician-scientist and professor of neurology, specialising in neuroimmunology. His work aims to create next generation healthcare by developing innovative connections between patients and providers that transform medical management. He is involved in the implementation of extreme healthcare concepts focused on delivering care more accurately, efficiently, and intelligently.