Robust analytical methods are the first fundamental step for the understanding of physiological mechanisms in health and disease. Dr Christopher Gerner and his colleagues from the University of Vienna, Austria, have developed a straightforward assay for finger sweat analysis to assist clinicians in personalised monitoring of metabolic pathways. The team have devised the metabo-tip sampling assay, which promises to be a game-changer for the monitoring of dietary and lifestyle patterns, thanks to its non-invasive character and the potential for frequent sampling.

Biomonitoring of metabolic reactions seeks to identify biomarkers for disease diagnosis and information on prognosis or therapy, holding great potential to improve clinical outcomes. In this regard, it is best practice to monitor the progress of metabolic reactions for as many time points as is feasible. However, there are many limitations that make the frequent and accurate sampling of biological fluids a rather difficult task. Urine analysis does not support real-time kinetic studies, repeated blood sampling is not easily attainable, and saliva, which is often contaminated, does not support ultrasensitive analysis.

Recent work making use of finger sweat for human metabolic studies demonstrates that this medium may offer a valid solution, as sampling is non-invasive, risk-free, easy, and fast. Even microgram-level dietary substances are detectable within the smallest amounts of sweat collected from the fingertips. Dr Christopher Gerner and his team from the University of Vienna reported a non-invasive finger sweat sampling method that can be accomplished at different time points by untrained personnel. Fingertip sweat provides a rich source for metabolic phenotyping, and the method yields reliable, time-dependent results that allow clinicians to elucidate individual metabolic traits.

A new medium
Despite the progress with respect to sensitivity, individualised metabolic analysis still faces major challenges in terms of individual physiological variability, which can impact on drug response. Also, the monitoring of dynamic metabolic responses requires a considerable number of real-time data points; plasma, urine, and other biological fluids or tissues do not routinely allow for time-course studies because they would prove impractical or invasive.

The Gerner laboratory has been developing a non-invasive method from an alternative biological fluid to enable frequent sampling of the same individual for metabolic phenotyping. Gerner and his colleagues have hypothesised that sweat from the skin surface may represent a promising source for metabolic biomonitoring. The researchers maintain that, once it has been excluded that drug substances detected may originate from accidental dermal contact, it is reasonable to assume that the detection of drug-specific metabolites implies that the drug was ingested, metabolised, and subsequently excreted from sweat glands. Examples of clinical analysis of sweat include the screening of newborn children for elevated chloride and sodium levels to confirm cystic fibrosis, or forensic and criminal investigations to test for illicit drug use. It has to be said, however, that the examples mentioned typically involved a small number of metabolites and relied on elaborate methods to collect sweat.

In 2021, Gerner and his collaborators published a study in Nature to show that metabolic biomonitoring using sweat from fingertips combined with mathematical modelling may become a game-changer for precision medicine, because it has the potential to track the metabolic responses of individual patients over time. In their publication, the researchers outlined a workflow for the analysis of sweat samples from fingertips, from collection to data processing and interpretation. Many known, as well as previously unknown, endogenous and exogenous metabolites were identified in the sweat samples. The analysis revealed the presence of amino acids such as tyrosine and leucine, amino acid-related metabolites such as citrulline, but also hormones such as melatonin or progesterone. Interestingly, the neurotransmitter dopamine was among the newly identified metabolites, as well as many coffee-derived compounds, including caffeine and the related dimethyl- and methylxanthines.

Individual metabolic patterns after coffee consumption
The straightforward workflow developed at the Gerner laboratory provided the basis for the proof-of-principle studies to investigate caffeine metabolism in an individualised fashion. The intervention study, reported in the Nature article, involved 11 participants who consumed a standardised amount of coffee after a 12-hour fasting period. Two additional volunteers, who did not consume coffee, represented the control group. Sweat samples were collected just before coffee consumption and subsequently after 15, 30, 45, 60, 90, and 120 minutes. Fluctuations in the rate of sweat production were accounted for by mathematical modelling to reveal individual rates of caffeine uptake, metabolism, and clearance.

The metabolic products of caffeine by different liver enzymes were successfully identified in sweat from fingertips after coffee consumption. The sweat from the fingertips 15 minutes post consumption of the equivalent of a double espresso revealed 35 xenobiotics, including among others caffeine, theobromine, theophylline, paraxanthine, methylxanthines, and chlorogenic acid. Interestingly, the data showed upregulation of caffeine, theophylline, and paraxanthine across all participants after 480 minutes, as well as increased levels of dopamine after five hours. Adenosine, which is known to be an anti-inflammatory mediator, was significantly induced four hours post caffeine ingestion. Strikingly, metabolic time-courses following caffeine consumption revealed significant metabolic differences across individuals; specifically, the relative ratios of caffeine to its primary metabolic products reflected hepatic activity and could provide important insight on the health of the liver in different individuals.

Metabo-tip uses mass spectrometry to comprehensively test sweat samples for the presence of various xenobiotics and to identify and track the production of their metabolic products.

An assay for personalised metabolic monitoring
It is estimated that at least 40% and up to 95% of chronic illnesses can be traced back to lifestyle risk factors such as smoking, poor dietary habits, or lack of exercise. This is particularly true for insulin resistance, diabetes, and hypertension, all of which highly correlated with obesity. It is well documented that lifestyle changes can improve immunity and protect against the recurrence of certain types of cancers. Individual metabolic profiling is increasingly seen as a promising strategy to support the development of preventive and personalised medicine. With this in mind, the Gerner laboratory has looked at ways to monitor biomarkers linked to individual lifestyle patterns to prevent the development of chronic disorders.

In 2021, the team reported the development of an assay, called metabo-tip, for the analysis of fingertip sweat. The assay uses mass spectrometry to comprehensively test sweat samples for the presence of various xenobiotics and to identify and track the production of their metabolic products. To evaluate this platform, the team exposed volunteers to various dietary substances using standardised protocols, and investigated the individual metabolic responses. Coffee, dark chocolate, and citrus fruits were among the dietary items investigated. Significant changes in the sweat composition of the fingertips were observed as soon as 15 minutes post consumption of the food items. The analysis revealed the presence of health-promoting bioactive compounds but also of potential hazardous substances. For example, the consumption of an orange allowed for the identification of bio-active flavonoids such as nobiletin, hesperidin, and tangeritin, together with pesticides such as enilconazole.

Future perspectives
The 2021 study confirmed that both food and beverage consumption leave characteristic imprints on finger sweat composition and enabled conclusions to be drawn about the general lifestyle of individuals. Habits such as smoking and regular use of certain medicines will result in characteristic changes in finger sweat. The researchers concluded that metabo-tip may have a large number of practical applications in the monitoring of specific lifestyles, thanks to its non-invasive character and the potential for frequent sampling.

The team is currently performing clinical studies with patients affected by COVID-19 infection, breast cancer, or diabetes. The ongoing metabolic analyses are almost perfectly yielding distinct results for patient groups when compared to healthy controls. Further investigations will be needed to elucidate how the medications consumed by the patients can affect the results.

What first inspired you to work in this field?

We wanted to collect as many data points as possible with regard to individual health-related properties. While we started with tissue and blood-plasma analysis, we now appreciate the fantastic accessibility of finger sweat samples combined with the enormous data density delivered by this method.

What are the next steps for this research?

We plan to systematically assess individual exposure, uptake, and metabolism of xenobiotic and potentially toxic compounds in relation to the corresponding endogenous responses, including hormones, oxidative stress markers, and other stress factors by metabo-tip. This will enable completely new opportunities for risk evaluation.

What impact do you hope your work will have?

We expect metabo-tip to eventually become a lifestyle-optimising tool, enabling each individual to check whether some food they consumed was healthy or not, whether life circumstances were stressful beyond acceptable limits, and whether any kind of therapy would work as expected. 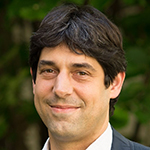 Faculty of Chemistry, University of Vienna