The processes of fixing solar energy as carbohydrate by photosynthetic organisms (cyanobacteria, algae and plants), and its subsequent breakdown to release energy, water and carbon dioxide, are central to life on earth. They have been subject to great amounts of scientific study, and it was thought that the pathways and reactions of both had been well established. However, Dr Gutekunst’s work found that, at least in cyanobacteria and plants, one glycolytic route has been previously overlooked.

Energy from the sun
All living organisms need two things to survive: a source of energy, and a source of organic carbon for building cells. Both of these are fixed by plants during photosynthesis – making this process essential to life on earth. During photosynthesis, energy from sunlight is used to combine water and atmospheric carbon dioxide into glucose sugars, a form of carbohydrate. The solar energy becomes stored as chemical energy in the bonds between carbon, hydrogen, and oxygen atoms in the glucose molecules.

Glucose and its derivates can go on to be built into larger molecules, such as starch, protein, fat, and even DNA. Alternatively, it can be broken down completely again – either within the plant or in an animal that has eaten it – releasing water, carbon dioxide and, crucially, the stored energy. The energy is released in a molecule known as ‘adenosine triphosphate’ (ATP) which is the ubiquitous energy currency of all cells. 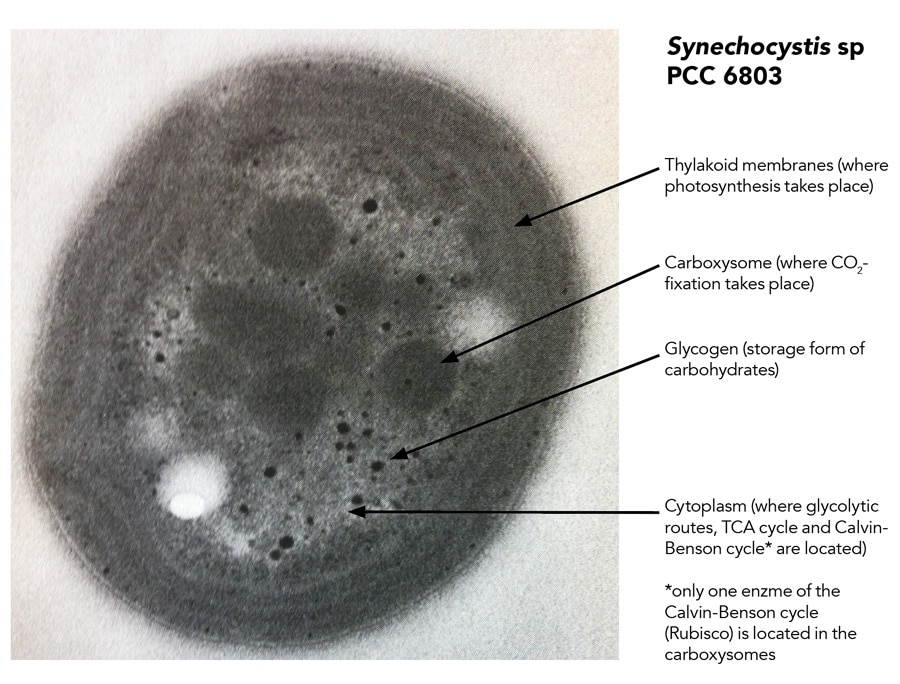 Energy from sugars
It has long been known that there are two different pathways by which animals, cyanobacteria and plants break down glucose: the Embden-Meyerhof-Parnas (EMP) pathway, also called simply ‘glycolysis,’ and the oxidative pentose phosphate (OPP) pathway. However, simpler organisms such as bacteria and archaea are known to employ a variety of routes to release energy from glucose. One of these is the Entner-Doudoroff pathway.

Dr Gutekunst’s team has now found that the key enzyme of the Entner-Doudoroff pathway, known as KDPG aldolase, is in fact widespread amongst photosynthetic organisms such as cyanobacteria and plants, from mosses to higher plants including rice, barley, maize, banana, potato, spinach, soybean, cotton and tobacco. In barley, their analyses have shown that KDPG aldolase is functional during periods of active growth, such as germinating seeds and developing roots, suggesting an operating Entner-Doudoroff pathway is present.

Using the photosynthetic cyanobacterium, Synechocystis, Dr Gutekunst and colleagues have developed mutants in which each of the three pathways of glucose breakdown is disrupted. They found that growth in the presence of light and glucose was reduced most significantly in those mutants without a functional Entner-Doudoroff pathway. This indicates that the Entner-Doudoroff pathway is not only functional, but is a significant contributor to growth in Synechocystis. The team is now working, with Dr Götz Hensel from the Leibniz Institute of Plant Genetics and Crop Plant Research at Gatersleben, to develop similar ‘knockout’ mutants in barley to test the significance, behaviour and requirements of the pathway in higher plants.

Unique features
So, how does the Entner-Doudoroff pathway differ from the other two pathways operating to break down glucose? There are two crucial differences.

First, the Entner-Doudoroff pathway releases less energy from glucose: one molecule of the energy currency ATP per glucose molecule, compared to two in the EMP pathway. Although this might seem disadvantageous at first sight, the Entner-Doudoroff pathway has some advantages. The pathways by which glucose is built up and broken down to some extent overlap, but with reactions occurring in opposite directions. Thus, during daylight when photosynthesis is active, the action of the EMP or OPP pathways can undo the reactions occurring in photosynthesis, causing futile cycling between the two processes. Previously, it was thought that cyanobacteria compartmentalise their cellular processes chronologically, focusing on photosynthesis during daylight hours and respiration in the dark, thus avoiding this problem. The big advantage of the Entner-Doudoroff pathway is that it does not overlap with any of the reactions of photosynthesis, allowing cyanobacteria to break down glucose and release energy and cellular building blocks during daylight as well as at night, without risk of futile cycling. This was exactly when Gutekunst’s mutant studies showed that Synechocystis released significant amounts of energy from glucose via the Entner-Doudoroff pathway.

Successful symbiosis
One of the outstanding questions surrounding the Entner-Doudoroff pathway is why it is found only in plants and bacteria, never in animals. An evolutionary analysis suggests that – like photosynthesis – the Entner-Doudoroff pathway made its way into plants from cyanobacteria via a process of ‘endosymbiosis,’ in which one organism is engulfed by another and part of its genome becomes permanently incorporated into the host. Interestingly, however, the pathway is not present in all plant species. Crucially, it appears to be missing from the ubiquitous ‘model’ plant species, Arabidopsis (thale cress), used for genetic, biochemical and physiological studies across the world. This may explain why the significance of the pathway has remained overlooked for so long.

Having overturned the paradigm of two routes to glucose breakdown in photoautotrophs, Dr Gutekunst now wants to elucidate more fully the physiology of this third route, integrating this into a full and complete revision of carbon metabolism in cyanobacteria and plants. With Prof Christoph Wittmann of Saarland University, she hopes to clarify the importance of the three different mechanisms of glucose breakdown and the relative carbon fluxes in each, under the full range of conditions that plants and cyanobacteria experience, from light to dark and nutrient-rich to nutrient‑limited.

The implications of this research extend beyond fundamental knowledge to important applications, including the potential to manipulate plants and cyanobacteria for biotechnological uses, such as producing fuels including hydrogen (H2) as an energy source, pharmaceuticals or nutrients. It’s high time this overlooked metabolic pathway got a look-in!

Why do you think the Entner-Doudoroff pathway has been overlooked for so long?
<>Protein sequences from many plants and cyanobacteria have been available for a long time. However, pathways and key enzymes are not automatically eye-catching. You need to search for them. In eukaryotes (animals and plants) routes of glucose breakdown were first studied in animals that lack this pathway. There was a paradigm that the Entner-Doudoroff pathway is restricted to prokaryotes (bacteria and archaea). It is furthermore missing in the most studied model plant Arabidopsis thaliana. I guess as soon as something is accepted to be completely understood these things are naturally not questioned any longer. As long as we do not stumble upon inconsistencies, we can be collectively blind to misconceptions.

What drew you to study this pathway yourself?
<>We found the pathway accidentally. I was interested in studying the influence of glycolytic routes in cyanobacteria on their production of hydrogen, which is a gas that can be used as a source of energy in fuel cells. So we started to construct deletion mutants in which we knocked out all known glycolytic pathways. To our surprise, these mutants were still able to enhance their growth on glucose. This was completely contradictory to what we had expected. So we realised that something very basic was missing in the picture that we had of the central carbon metabolism in cyanobacteria.

What role do you think the pathway plays in nature…?
<>There is exciting work from Flamholz et al 2013, which states that this pathway is especially advantageous when bacteria and archeae are not limited in growth by the ATP yield of their glycolytic route but instead by protein costs. In photosynthetic organisms such as cyanobacteria and plants it seems most likely that it is important when glucose needs to be broken down in parallel with photosynthesis. And this is due to the fact that only this pathway does not form a futile cycle with the Calvin-Benson cycle of CO2 fixation.

…and how could the pathway be harnessed by humans?
<>If photosynthetic organisms are exploited to use the energy of sunlight for the production of fuels, pharmaceutics, food additives and cosmetics, it is essential to understand the carbon flow in these organisms. This gives us the opportunity to manipulate the carbon flow in a desired manner. The Entner-Doudoroff pathway might be especially important as it can run in parallel with photosynthesis. So it might be advantageous to overexpress this pathway in order to enhance product yield.

Where do you see your research into the Entner-Doudoroff pathway going next?
<>I feel that it is absolutely essential to understand the central carbon metabolism of photosynthetic organisms as basically all life on earth depends on it. We eat plants, drive our cars, aircrafts, and ships and heat our houses with fossil fuels that are nothing else but fixed carbon from ancient plants. What I find most thrilling is to unravel the interplay of photosynthesis and the Entner-Doudoroff pathway. It seems that this pathway is physiologically most important under photosynthetic conditions. And what I really love is the hypothesis that photosynthesis, which is an autotrophic process, might be less independent than generally accepted. It might be that this process needs support from a constant supply of glucose breakdown. Future work will show if this view is true. 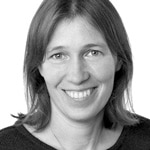 Dr Kirstin Gutekunst is a senior scientist in the group of Prof Rüdiger Schulz. She was recently awarded with a Forschungspreis from the BMBF for her own research. This group aims to maximise hydrogen production in cyanobacteria. She additionally holds two DFG grants to study the carbon metabolism in photoautotrophs. Dr Kirstin Gutekunst is mother of five children, two of them studying at University and three of them still attending school. Combining family life and science is her passion.