Autoimmune diseases, in which the body’s immune system mistakenly attacks healthy cells, are surprisingly common. They include widespread conditions like diabetes type 1, multiple sclerosis, Lupus or rheumatoid arthritis, as well as rarer diseases such as systemic sclerosis and dermatomyositis. At present, there is unfortunately no cure for most of the dozens of clinically recognised autoimmune diseases. Most autoimmune diseases share a number of significant characteristics: there is no obvious cause, susceptibility depends on a combination of multiple genes (i.e. it is multigenic), and, although there may be suspected environmental causes, none have been proven.

Although there is no definitive cure for any autoimmune disease, there are some medications which will interfere with the course of these diseases or even correct some symptoms, albeit for too short a time. Two classes of these medications are 1) corticosteroids, which cause non-specific immunosuppression but can have serious side effects, especially if used for a long time, and 2) other immunosuppressive drugs, one example being the anti TNF-alpha antibody, which is given to people with rheumatoid arthritis to help block the over-activity of the immune system. However, none of these treatments can achieve a true cure, which would involve the return of the activated immune system to a normal state. 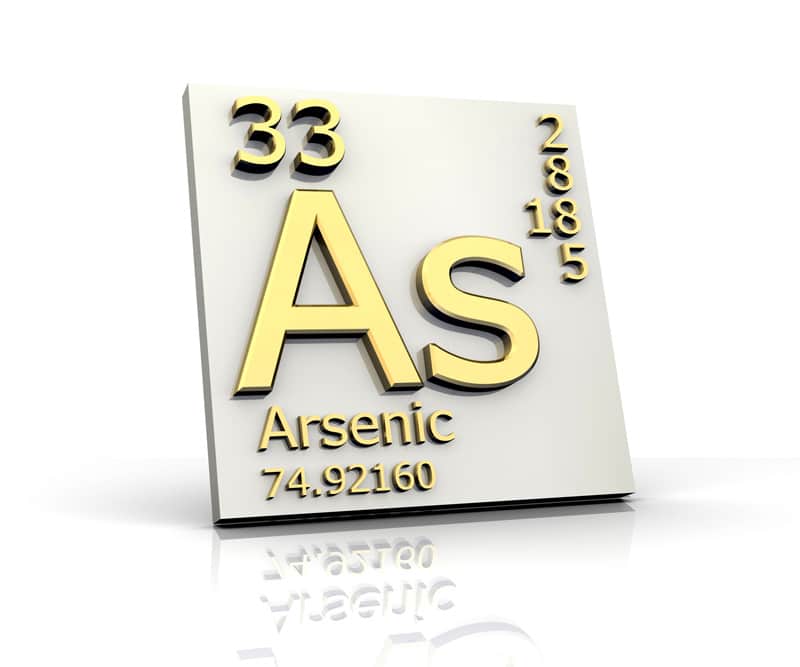 Clearly, new research is desperately required if a definitive cure is to be found. This likely involves investigating the detailed cell pathways that influence the mechanisms of disease, as well as seeking the return of the immune system to normal function.

Arsenic: an old medication offers new potential
Arsenic salts are drugs with a reputation, largely gained from their use as a poison in numerous murder mysteries. However, arsenic – and its best-known variety, arsenic trioxide – has not always been used for villainous ends. For centuries, arsenic was used as a treatment for a variety of common afflictions; for example, it was used to treat syphilis, before the advent of antibiotics.

Arsenic trioxide is a potentially effective medication for a variety of autoimmune diseases.

In the last few years of the twentieth century, researchers discovered that arsenic trioxide is an effective cure for a rare cancer called acute promyelocytic leukaemia (APL). In fact, arsenic is so good at treating APL that it is now widely recognised as a first line treatment of the disease, and can lead to remission in more than 95% of cases, an astonishing success rate. This, together with arsenic’s history, has resulted in it being known as “the poison that cures.” 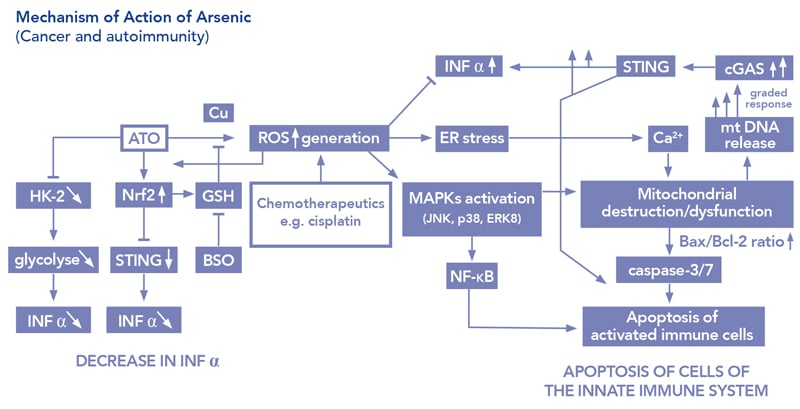 Other successful preclinical studies in other mouse models of the human disease allowed Medsenic to anticipate the effects and characteristics of arsenic trioxide action on systemic Lupus erythematosus. This supported the results of the early study. Arsenic trioxide seems to have a highly original mode of action. It appears to produce immunomodulation (adjustment of the immune system) by inducing a cell death programme in specific activated immune cells. Destruction of cells occurs through a process called apoptosis, which is, simply put, intrinsically triggered cell death. Arsenic trioxide also affects important specific aspects of the cell signalling cascade, that occurs during the immune response, such as a decrease in INFα (see schema).

Professor François Rieger and his colleagues believe that arsenic may be a new, potent medication for a variety of poorly managed or untreated autoimmune diseases.

Fundamentally, arsenic trioxide has a unique ability to cause apoptosis through an increase in cellular oxidative stress. Crucially, the compound has a specific immunosuppressive effect, without affecting normal components of the immune system and with minimal side effects.

Unlocking the potential of arsenic
Following the promising results of these early studies, the Medsenic team decided to carry out further investigations of the potential of arsenic trioxide in treating lupus. A first trial took place in five lupus centres in France and was coordinated by Professor Mohamed Hamidou of Nantes University Teaching Hospital. The primary aim was to evaluate the safety and tolerance of arsenic trioxide in patients with lupus. The results were presented at an international Conference in San Francisco in November 2015. The study involved 11 patients with moderate to severe lupus. The patients received four weeks of intravenous arsenic trioxide treatment as an add-on therapy to the standard treatment (hydroxychloroquine and prednisolone), with 20 weeks of follow-up. The results of the study demonstrated that the arsenic trioxide treatment was both safe and effective, supporting the need for further, larger clinical trials. 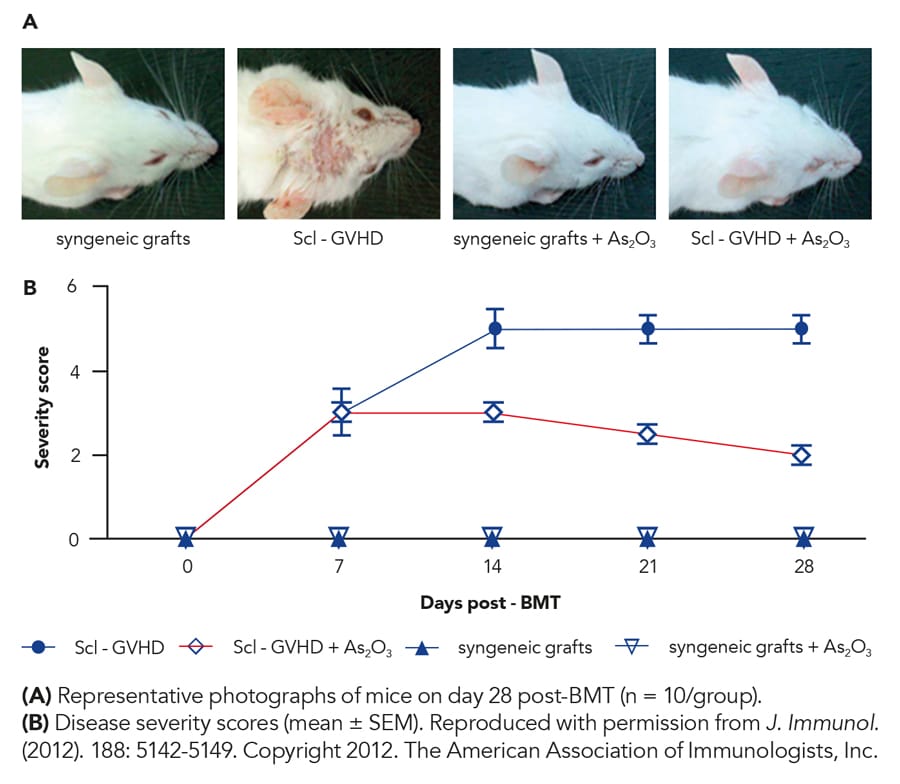 This first demonstration of tolerance and efficacy opened new possibilities to use arsenic trioxide in other, more severe, autoimmune diseases. During the summer of 2016, Medsenic was granted authorisation from the ANSM (France National Drug Safety Agency) to initiate a Phase II clinical study for the first line use of arsenic trioxide in the treatment of chronic graft-versus-host disease (cGvHD). Chronic GvHD can occur after a bone marrow or stem cell transplant, when the transplanted donor immune cells attack the recipient’s body. This chronic form, essentially different from the acute GvHD, which often comes first can develop as a very severe, lethal disease, resistant to most immunosuppressants.

The Medsenic Phase II clinical study on cGvHD began in 2016 under the direction of Professor Mohammad Mohty of the Saint-Antoine Hospital in Paris. For this study, Medsenic provided their own arsenic trioxide formulation, called Arscimed®. The primary objective of this innovative study was to demonstrate the efficacy of arsenic trioxide in 22 patients recently diagnosed with cGvHD, as an add-on therapy for the standard of care, corticosteroids with or without cyclosporine. The aims of Medsenic were to both decrease quickly the need for corticosteroids and significantly improve the six-month response rate to the treatment by intravenous arsenic trioxide.

The preliminary results of the study indicate that the treatment has a very significant effect on the patients, with sustained improvement for several months after the initial treatment (over one month). The final results are expected after the trial ends, in mid-2020.

One cure, multiple targets?
In the future, Medsenic intends to test Arscimed® as a treatment for a wider range of conditions. Professor François Rieger and his colleagues believe that arsenic may be a new, potent medication for a variety of poorly managed or untreated autoimmune diseases. A key challenge will be to determine the optimum dose and length of treatment to efficiently destroy pathogenic cells, without adversely affecting normal components of the immune system or other organs. Arsenic trioxide may prove to be a “first-in-class” treatment and an effective therapy for several autoimmune diseases.

Ultimately, Medsenic is on course to achieve its initial goal: to offer patients affected by autoimmune diseases a way to eliminate symptoms caused by abnormal functioning of the immune system. Overall, autoimmune diseases affect 8-10 % of the total world population and represent the third leading cause of direct or indirect mortality. If the team at Medsenic succeeds in their aims, the results could be truly life-changing for a vast number of people.

Arsenic has been used as a medicine for hundreds, possibly thousands, of years. Hippocrates is known to have used some arsenic derivatives as escharotics (salves intended to remove dead or damaged tissue).

In 1786, Thomas Fowler, an English physician, reported the use of arsenic trioxide in the cure of agues (fevers). He created a solution of 1% potassium arsenite, which came to be known as “Fowler’s solution”, that was used to treat skin conditions for 150 years. It was later rediscovered, in 1931, and used as a treatment for leukaemia, especially chronic myelogenous leukaemia.

Arsenic was used by Paul Ehrlich, the famous German chemist and pharmacologist, in the first part of the 20th century to create a medication for syphilis. He invented the “magic bullet” concept in 1907: a medication targeting the molecular mechanisms of a disease. Due to this discovery, many consider Ehrlich to be the “father of chemotherapy”. The first use of arsenic in the treatment of cancer originated in Chinese medicine in the 1970s, with an arsenic-based preparation called Ailin 1. It was composed of 99% arsenic trioxide and 1% mercury by weight, and had, according to Zhang Tingdong at Harbin Medical University, significant clinical activity.

In the 1990s, arsenic trioxide was used for patients suffering from APL – which had, until then, a high morbidity rate – with extremely significant remissions. The complete remission rate was in the range of 73%, with a long-term survival of >28%. Side effects of arsenic were reported to be mild. 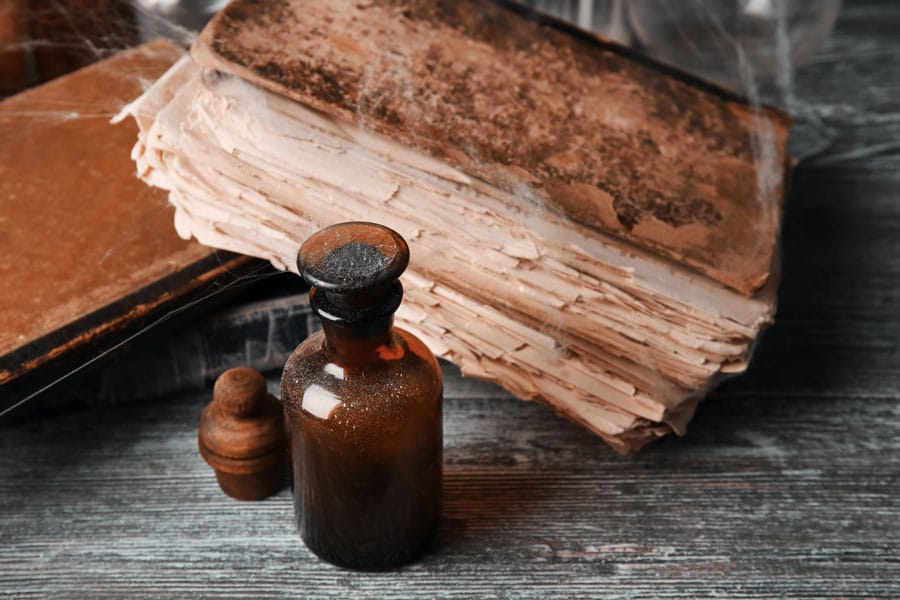 Do you think that arsenic has the potential to treat any non-autoimmune diseases?

<> Arsenic trioxide is used to treat non-autoimmune diseases. The most advanced field is cancer, since many clinical trials are under way. It has also been used in a variety of other conditions as syphilis, before the advent of antibiotherapy, and inflammatory conditions accompanying neurodegenerative diseases should in the future benefit from its use. Arsenic interferes often positively with a lot of critical cell regulatory pathways.

Professor François Rieger is currently President of Medsenic SAS. He obtained his PhD from the University of Paris-VII. He is a former CNRS Research Director. In 2002, Prof Rieger founded and directed the BioPark Institute of Archamps (74), and in 2006 became Director of the French-Swiss “Ageing, Longevity and Well-being” Group, a position he held for 4 years. He is the author of over 175 international publications in the field of Life Sciences and Neurosciences.

Véronique Pomi is Executive Director of Medsenic SAS. She studied at the Institut François Gény, University of Lorraine, where she was SME entrepreneur. In 2007, V. Pomi founded and directed ARC Consulting – a strategy, communication and human resources consulting firm. Prior to that, she was Development and Communication Manager in a consulting company specialising in human resource management, social audit and organisation.

The French biopharmaceutical company Medsenic is committed to an innovating therapeutic approach, exploiting new possibilities offered by the therapeutic use of arsenic salts, thus providing opportunities for effective treatments for autoimmune diseases.

The role of CD83: Autoimmunity, transplantation and beyond
Health & Medicine
Read This Article