Physical Sciences
The origin of life on Earth has been a long-debated issue. There have been many theories as to how life evolved, but Professors Shigenori Maruyama (ELSI, Tokyo Institute of Technology), Ken Kurokawa (National Institute of Genetics), and Dr Toshikazu Ebisuzaki (RIKEN) have found a way to narrow the field to a single likely theory. By identifying a list of nine essential environmental requirements, they suggest that the most likely location for the birthplace of life is a nuclear geyser where material and energy regularly circulated. The Hadean Bioscience Project has also produced a series of movies in cooperation with LiVE Company Ltd.’The whole history of the Earth and life’ is available on YouTube.

The origin of Earth is a complex story. Its surface has undergone a long evolution, experiencing extreme changes over millions of years. Since its earliest accretionary phase, where gas and dust began to coalesce under the influence of gravity, it has been a dynamic planet. Bombardment from asteroids and a hot inner core meant that the earliest environment on Earth was hostile, bare rock. Geologists refer to this time, starting at Earth’s initial formation 4.6 billion years ago, as the Hadean eon. The word Hadean derives from the Greek god Hades who ruled the underworld, and is an apt analogy for the hellish environment.

Geologists have long been studying the few remnants of this time recorded in rock in the hope of finding clues about the conditions on Earth. The only records from between 4.6 and 4 billion years ago that remain are found in a hardy crystalline mineral called zircon. However, it is vital that scientists learn as much as possible about this time, as it is in these inhospitable and hellish conditions that the origin of life occurred.

Professors Shigenori Maruyama, Ken Kurokawa and Dr Toshikazu Ebisuzaki are part of a team working on the Hadean Bioscience Project, mainly based at the Earth-Life Science Institute (Tokyo Institute of Technology). The project combines scientists from a range of backgrounds, including geology, biology and physics, creating an interdisciplinary team working towards answering the fundamental question of when, where and how life was born on Earth.

The Hadean Earth
Discovering the answer as to how the very first life began on Earth has long been a challenge for scientists. Could life have spontaneously appeared on Earth? If so, how could this occur? And does this mean that other planets with similar environmental conditions also contain life?

An interdisciplinary team working towards answering the fundamental question of when, where and how life was
born on Earth.

We know that life on Earth is built around compounds that contain elements such as carbon, nitrogen, hydrogen and oxygen. Complex sequences of these elements bond together, forming the very building blocks of life. They form essential organic molecules, such as sugars, enzymes, proteins and DNA. However, these organic molecules did not naturally exist on Earth during the Hadean eon, when the first origins of life appeared. The elements required existed only in inorganic form, bound up within the rocks, atmosphere and the early ocean.

The earliest Earth was a ‘naked planet;’ the Hadean Bioscience colleagues describe it as having no ocean or atmosphere when it first formed. These eventually appeared around 4.37 billion years ago after Earth had been pelted by aqueous asteroid material. Once there was liquid water and an atmosphere, there was a greater chance for prebiotic life to form (the chemical precursors to life on Earth). The first traces of life recorded on Earth are thought to be as old as 4.2 billion years, indicating that life may have evolved within 200 million years after the first appearance of liquid water.

Requirements for early life
We know that all the key elements for life are found on Earth, but they do not easily form organic compounds. Early experiments during the 1950s showed that it was possible for amino acids to form in water condensation within experimental conditions that mimicked the atmosphere of the early Earth. However, for this to occur, a powerful energy source was required. The input of energy caused chemical reactions capable of creating compounds based on hydrogen, carbon and nitrogen that would eventually form organic molecules.

The nuclear geyser
There have been many theories as to how life began. One of the most popular was put forward by Darwin himself, who suggested that a ‘warm little pond’ could have been the most likely location for life to begin. Another popular theory states that hydrothermal vents along mid-ocean ridges would be an ideal location for the precursors of life to develop, whilst others propose that life was carried here from elsewhere in the Universe and delivered during an asteroid impact. By identifying the essential requirements for life, the Hadean Bioscience colleagues have been able to identify the most likely location for life to have begun. 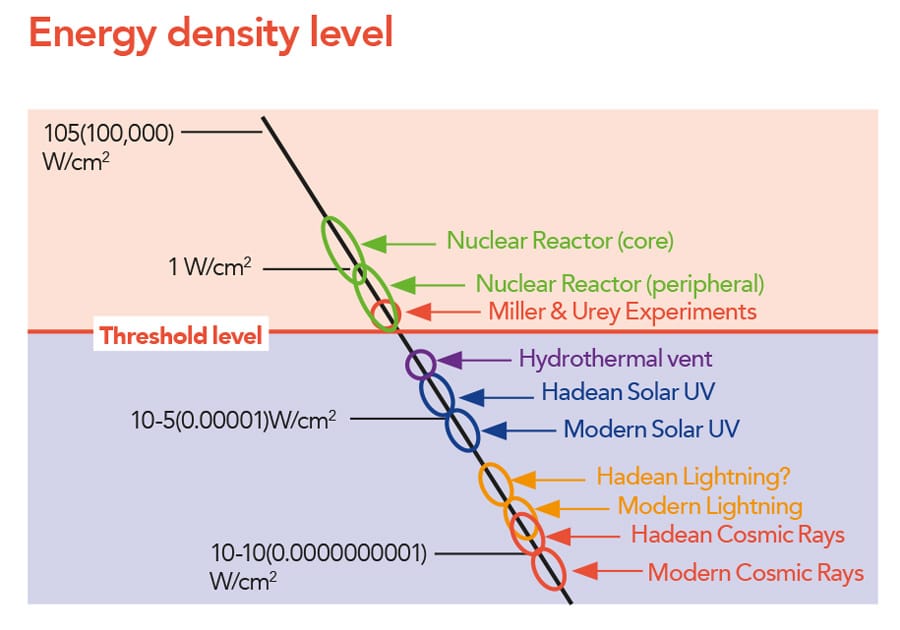 Nuclear geysers are a phenomenon we do not see on present-day Earth. During the Hadean eon, some radioactive elements were much more common on the Earth’s surface. Radioactive elements, such as uranium, have unstable isotopes which break down over time and release radiation. The charged particles that form radiation can react with the surrounding water, activating inert molecules and atoms and producing a flow of electrons that drive further chemical reactions. Water is heated by the natural nuclear reactor, and is periodically sprayed out onto the Earth’s surface in a similar manner to the geysers we see on Earth today.

… understanding these key requirements for the formation on life on Earth and how they define the location for its earliest beginnings, we can begin to understand where we might find life
beyond our planet.

The appearance of first life
The Hadean Bioscience researchers have been able to show that the nuclear geyser is the only theory for the location of first life that fits all nine essential requirements: 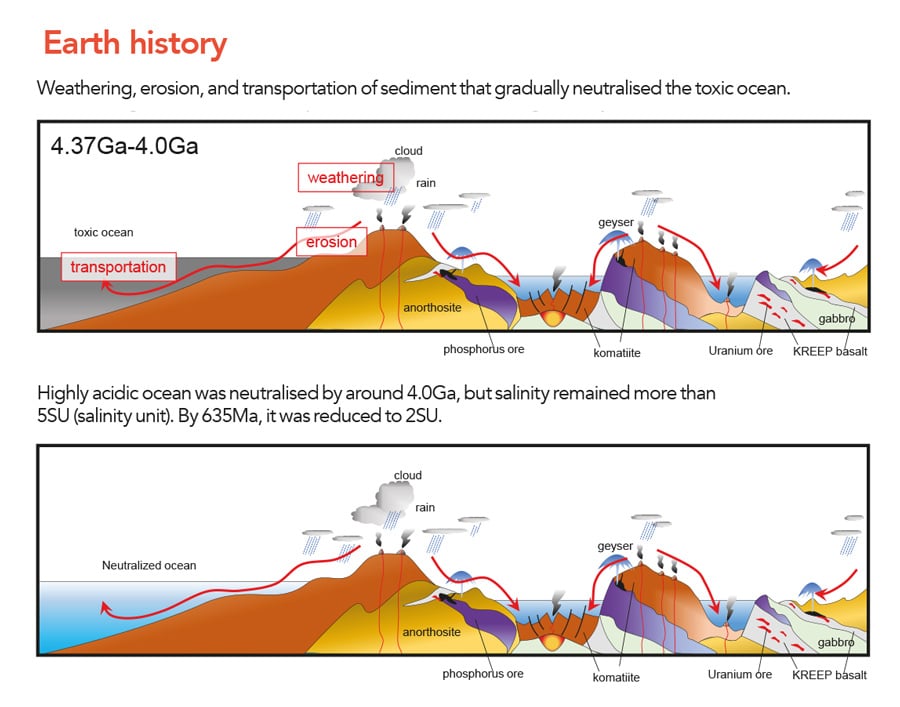 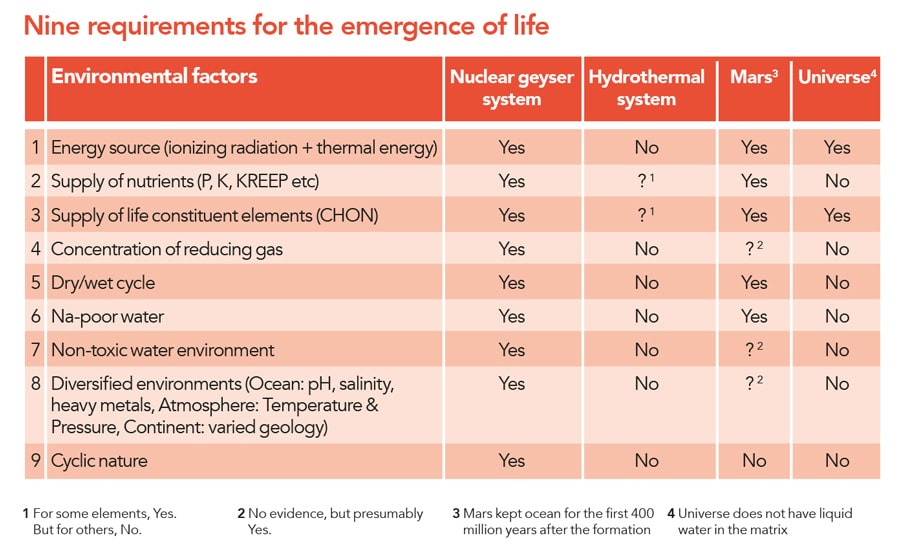 Life beyond Earth
The team have been able to show that a nuclear geyser is the most likely location to be the birthplace of life, rather than at a hydrothermal vent with toxic oceans, a lack of nutrients and not enough energy to drive the reactions that generate organic molecules. A nuclear geyser system is the only proposed location that meets all the conditions. By understanding these key requirements for the formation of life on Earth and how they define the location for its earliest beginnings, we can begin to understand where we might find life beyond our planet.

What first inspired you to investigate the origins of life on Earth?

The origin of life: The conditions that sparked life on Earth was last modified: January 8th, 2020 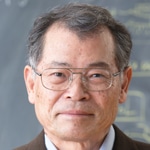 Shigenori Maruyama is a well-known world leading interdisciplinary scientist. He has a long background of research into world geology, plate/plume tectonics, mantle dynamics through time, and aims to systematise the co-evolutional history of the Earth and life. In 2012, he started a full-scale research project on the origin of life and has recently proposed new models. 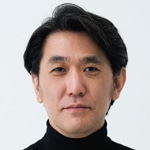 Ken Kurokawa is the head of the Hadean Bioscience Project. His unique scientific background (majored in geology first, later changed to biology) strongly influenced and promoted this interdisciplinary research project. He has also managed genome database projects based in Japan. 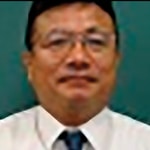 Toshikazu Ebisuzaki is an astronomer but has a detailed knowledge of prebiotic chemical evolution. He has successfully combined his knowledge of physics, chemistry, and biology to confirm the necessary requirements for life’s emergence. Through the Hadean Bioscience Project he and Prof Maruyama have proposed a new model for the birthplace of life: the Nuclear Geyser model.

The interdisciplinary Hadean Bioscience Project started in 2014 with the aim of unravelling the origin of life and to answer the fundamental questions: “When, where, and how life was born.”

This research was supported by MEXT KAKENHI: Grant-in-Aid for Scientific Research on Innovative Areas,

6 thoughts on “The origin of life: The conditions that sparked life on Earth”