Physical Sciences
Aerosols are diverse and complex particles in our atmosphere. Varying hugely in both size and shape, scientists have faced significant technical challenges in measuring how these particles scatter and absorb the sun’s light, making it difficult to accurately assess their influence on the Earth’s atmosphere. Dr Matthew J. Berg at Kansas State University and his colleagues are now combatting the issue through the cutting-edge technique of digital holography. Their work holds the potential to transform our understanding of how aerosols affect the atmosphere, providing researchers with critical information in the fight against climate change.

When sunlight hits a particle in the atmosphere, some of it may be absorbed, while the rest will be scattered in many different directions. This process has profound impacts on the energy balance of the atmosphere as a whole, and climatologists are well aware that it varies between different particles. Some gases like ozone, for example, absorb ultraviolet radiation from the sun, safeguarding life on Earth’s surface; while greenhouse gases like carbon dioxide absorb thermal infrared radiation, heating up the atmosphere. Researchers quantify these properties using a quantity called ‘radiative forcing’ – defining the balance between the energy being absorbed, and that which is radiated back into space.

When more energy is absorbed, radiative forcing is said to be ‘positive’, and the atmosphere heats up – as is clearly seen with the greenhouse effect. In contrast, ‘negative’ radiative forcing causes the atmosphere to cool down. The effect is an important element of atmospheric models, which use a combination of thermodynamics and fluid dynamics to predict how the atmosphere will behave over time. However, the composition of the atmosphere is more complex than a mixture of relatively simple molecular gases. In reality, a far greater variety of much larger particles are floating above our heads. Such particles not only absorb light, but they also scatter it. While gas molecules scatter light in a simple way, aerosol particles larger than about a micrometre in size scatter light in a highly complicated way that is difficult to model in general.

Assessing the impact of aerosols
Although they are invisible to us, the atmosphere plays host to a diverse array of liquid and solid particles, including pollen, soot, water droplets, and mineral dust. Known as ‘aerosols’, these particles can range in size from just nanometres to hundreds of micrometres, and in shape from simple spheres to highly irregular structures. Because of this diversity, aerosols as a whole are far more complex to study than molecules like ozone and carbon dioxide, making it much harder to measure their impact on the atmosphere’s radiative forcing.

incident on a particle and the light that it scatters. Such a pattern is known as a hologram and is measured in our work by a digital sensor (CCD). After applying a Fourier-transform-like operation to the measured holograms, an image of the particle is obtained.”

Previous studies have concluded that some aerosols probably have negative radiative forcing, slightly cooling the atmosphere. However, these results are uncertain; particularly for mineral dust, which is typically a large particle and has a strong influence on other atmospheric processes, like cloud formation. Ultimately, this means that it is extremely difficult to incorporate the influence of aerosols into current atmospheric models. As climate change advances, accurate models are becoming critically important in predicting how the Earth’s atmosphere will change in the coming decades; making it increasingly vital for researchers to find ways to accurately measure the radiative forcing of aerosols.

Difficulties with imaging
Before they could produce accurate images of aerosol particles, Dr Berg’s team had several major difficulties to overcome. The most immediate problem was that aerosols are highly delicate; if collected physically, their unique shapes are likely to be destroyed, resulting in flawed measurements of their properties. One solution to this issue would be to illuminate the particles with a pulsed laser beam, and then to measure the patterns created as they scatter the light in different directions. Such patterns are known to be related to the particle size and shape.

However, this technique comes with a further difficulty: because aerosols have such intricate structures, the scattering patterns they produce tend to be too complex to accurately interpret. Analogous to how it would be virtually impossible to reconstruct the shape of an animal from an unfamiliar set of footprints, aerosol particles are very difficult to model from their scattering patterns – a conundrum known as the ‘inverse problem’.

Our project applies novel concepts in light scattering to obtain images of atmospheric aerosol particles in a contact-free manner.

Introducing digital holography
Dr Berg proposes that the inverse problem can be sidestepped while simultaneously avoiding invasive measurements, through the cutting-edge optical technique of digital holography. “Our project applies novel concepts in light scattering to obtain images of atmospheric aerosol particles in a contact-free manner,” he explains. “This is done by measuring the interference pattern produced by light incident on a particle and the light that it scatters. Such a pattern is known as a hologram and is measured in our work by a digital sensor (CCD). After applying a Fourier-transform-like operation to the measured holograms, an image of the particle is obtained.”

Obtaining computationally rendered images in this way already revealed information about the size, shape, and scattering properties of individual particles. However, by relating particle shapes to their scattering patterns, which vary depending on the angles at which they are viewed, Dr Berg’s team could complete the final piece of the puzzle: direct measurements of the detailed size, shape, and scattering of the larger-size category of aerosol particles.

To do this, they implemented one further modification to their digital holography setup. In addition to the red hologram-producing laser, they incorporated an overlapping green light source into the setup, which was filtered to separate the relatively weak scattered component of its light from the far brighter, unscattered light. Then, only the scattered light was allowed to reach the CCD sensor, where it was compared with the hologram-based particle image produced by the red beam. Ultimately, this allowed the researchers to directly relate the angle-dependent scattering patterns of aerosols to their shapes and sizes; which could provide useful information about their radiative forcing.

Building HAPI
Having demonstrated the success of this technique in the lab, Dr Berg and colleagues next aimed to integrate their laboratory-based digital holography setup onto equipment capable of studying particles in the atmosphere. To do this inexpensively, the team used a drone to carry their aerosol imaging equipment, allowing them to operate the setup in the air from the ground. A slight difficulty arose from the weight of the instrument, but the team solved the problem by designing and 3D printing the parts needed for their instrument using a polymer material.

The experiment has been a success so far, as Dr Berg describes: “We have constructed an instrument that performs this holographic imaging of aerosol particles from an unmanned aerial vehicle (UAV). The UAV instrument is known as the Holographic Aerosol Particle Imager (HAPI),” he says. Weighing in at less than 5kg, initial tests showed that HAPI can image freely flowing aerosol particles as small as 10 micrometres across.

HAPI could be used to carry out the first in-depth studies of the aerosols commonly found around our farms and cities.

Following these initial demonstrations, the researchers now hope to use HAPI to carry out the first in-depth studies of the aerosols commonly found around our farms and cities. “HAPI is being used to reveal the size and shape characteristics of large aerosol particles in agricultural and urban environments,” Dr Berg explains. “In aerosol science, large particles like these, which are nominally larger than one micrometre up to hundreds of micrometres, are known as Coarse-Mode Aerosol (CMA) particles.” Through these studies, HAPI could potentially be used to build up the first statistical description of how these CMA particles vary in both size and shape.

Improving climate models
Dr Berg’s team envisions that their work could help others to bridge a significant scientific gap: understanding the role in which large aerosol particles play in the dynamics of our atmosphere. Huge amounts of CMAs are generated primarily by natural sources (e.g. wind-borne dust, sea spray, biogenic aerosol). However, there is still a significant lack of knowledge regarding how these particles affect the atmosphere through radiative forcing.

“The new ability of HAPI to image CMA particles is important, because these particles constitute a major source of uncertainty for the radiative impact of aerosols on the climate and knowledge of their shape and size is needed for climate modelling efforts,” Dr Berg concludes.

Given that humanity’s impact on Earth’s atmosphere has become more broadly recognised, the work of Dr Berg and his colleagues is timely. Through future data gathered by HAPI or similar instruments, researchers could soon be able to more accurately incorporate the influence of CMA particles into their climate models. With such insight, climatologists may be able to better understand the extent to which the atmosphere is changing due to CMAs, providing us with potentially critical information in our continued fight against climate change.

In addition to providing vital information regarding climate change, are there other potential applications for your Holographic Aerosol Particle Imager (HAPI)?

<> HAPI could be useful for pollen identification and counting in agricultural contexts and as forecasts/notifications for allergy sufferers. HAPI, or a design similar to it, could be useful for monitoring the particle size of industrial powders, during their generation and/or use, for manufacturing purposes.

Note: I worry a little about overstating the role our work may play in the science of climate change. The climate, in general, is a tremendously complicated physical system with way more unknowns than knowns. Our work could be a useful tool for investigating a very limited piece of the puzzle, i.e., CMAs. 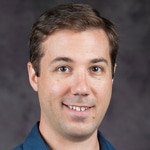 Matthew J. Berg is an Associate Professor of Physics in the Department of Physics at Kansas State University (KSU). His research focus involves electromagnetic scattering applied to sensing and characterisation. Professor Berg received a PhD in Physics from KSU in 2008 and a BSc in Engineering Physics from the Colorado School of Mines in 2003.