Physical Sciences
Electrochemical gas sensors are critically important tools used in a wide variety of everyday tasks, but with current designs, their performance can be significantly diminished in hot, dry conditions. Debbie Silvester at Curtin University, Australia suggests that this problem could be overcome through the use of specialised salts, which remain liquid at room temperature. While these substances are known to absorb water, presenting their own unique set of challenges relating to humidity, her team’s work shows that they can be a viable improvement to existing commercial gas sensor designs if the right precautions are taken.

In environments where harmful gases can reach dangerous levels, it is often incredibly important to monitor levels of the gases over time. In workplaces including mines, airports and building sites, as well as in healthcare, many lives can depend on instruments which alert us to the presence of deadly gases. At the same time, quantifying gas levels is of crucial importance to researchers monitoring the impact of human activities on natural ecosystems.

Perhaps the most widely used portable technique for monitoring gas involves passing electrical charges across solutions containing electrolytes – which separate into positively-charged cations and negatively-charged anions when dissolved in solvents.

Known as electrochemical sensors, these devices have a gas-permeable membrane that allows diffusion of gas to the sensing electrode. This electrode is connected with two other electrodes through a conductive solvent. The gas is either oxidised – losing electrons to the sensing electrode, producing a current, or reduced – gaining electrons from the electrode. The presence of a certain gas will subsequently vary the current at the electrode, which the sensor translates into a read-out of the concentration in the surrounding environment. The membrane serves a dual function to filter out interfering gases and prevent evaporation of the solvent.

As Dr Silvester describes, “electrochemical sensors are often used due to their high sensitivity, high selectivity, low cost, portability, durability, wide detection range and low power requirements.” Since their conception, these sensors have undergone numerous improvements, making them cheap and easy to use. However, significant problems still remain with current designs.

“One class of electrochemical sensor, amperometric gas sensors (AGSs), are available commercially, and are used in hand-held devices,” Dr Silvester continues. “The user presses a button to apply a voltage, and a current is recorded that is proportional to the gas concentration. However, these sensors are based on an old 1950s design, and have limitations in hot and dry environments.” This shortcoming arises since the solvents in which electrolytes are dissolved – typically either water or sulphuric acid – can quickly evaporate in these conditions, meaning the currents passing through them are significantly diminished.

Replacing solvents with room-temperature salts
In her research, Dr Silvester advocates an overhaul of electrochemical gas sensor designs, by replacing evaporation-prone solutions with more robust room temperature ionic liquids (RTILs). Just like dissolved electrolytes, RTILs can carry electric currents through freely flowing anions and cations, acting as both the solvent and electrolyte. However, they also will not evaporate like water-containing solutions, allowing the removal of the gas-permeable membrane, and simplification of the sensor design. RTILs also have numerous other advantages, which Dr Silvester explains:

“RTILs are salts with low melting points, made of cations and anions that are physically and chemically stable, have wide electrochemical windows, intrinsic conductivity, wide liquid temperature range, high polarity and an ability to dissolve a wide range of compounds,” she says. “By using RTILs, we are able to employ tiny volumes of less than a droplet, allowing the whole sensor device to be miniaturised to a size smaller than your fingertip, significantly reducing the materials and manufacturing costs.” 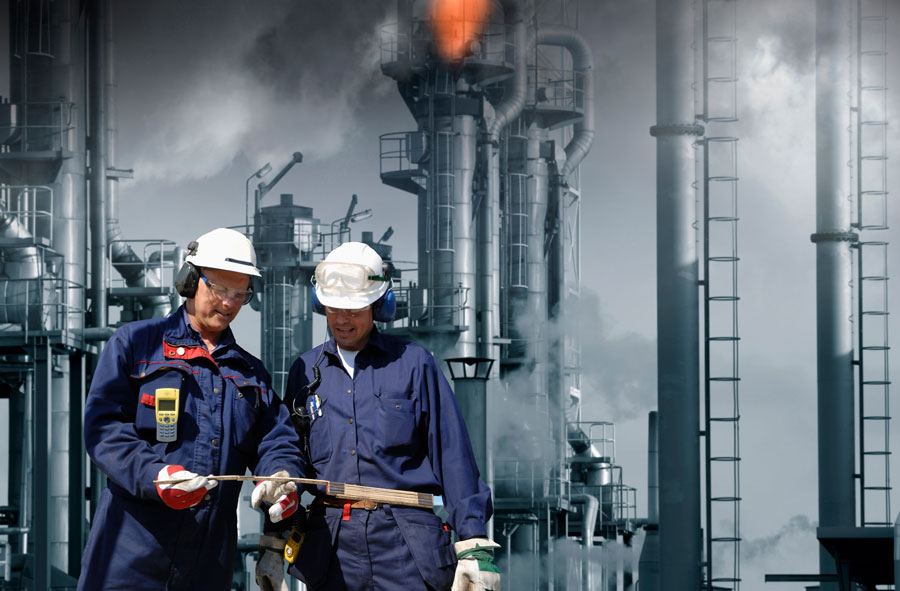 Along with these advantages, salts as a whole – defined simply as assemblies of cations (positive ions) and an equal number of oppositely-charged anions – encompass a diverse range of chemicals. “There are thousands of combinations possible, simply by changing the chemical structure of the cation and anion,” describes Dr Silvester. As it turns out, this selection is critically important to the effectiveness of RTILs in electrochemical sensors, since the substances aren’t without their own shortcomings.

RTILs are salts with low melting points, made of cations and anions that are physically and chemically stable.

Probing responses to humidity
Despite the fact that RTILs typically perform well in hot, dry environments, their advantages appear to diminish in more humid conditions. “RTILs are known to absorb water, and this can alter the electrode reactions occurring at the sensing electrode,” Dr Silvester explains. “Since gas sensors are required to operate in a range of environmental conditions with changing humidity levels, it is vital to understand the effects of humidity on the sensor response.”

By testing how electrochemical sensors containing RTILs with different structures respond in different ways to humidity, Dr Silvester’s team aimed to determine which salts produced more stable currents as humidity varied, making them far more suitable. In their latest study, the researchers observed the responses of different RTILs to oxygen, which is known to react in different ways depending on levels of humidity. 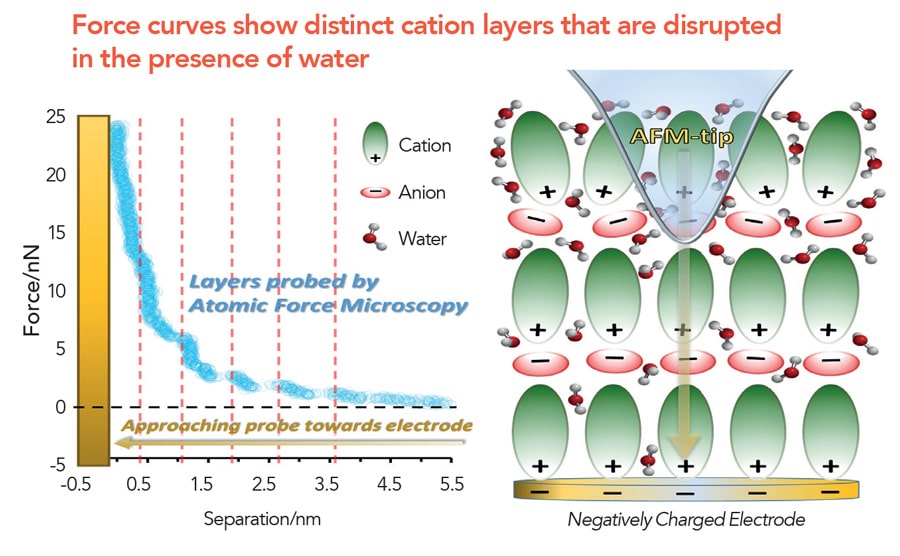 “Oxygen was chosen as a target gas, since the reaction mechanism is known to change from a one-electron reduction in dry conditions, to a multi-electron process in the presence of water. This change in electron number increases the current response, allowing us to investigate the water-repelling ability of different RTILs,” continues Dr Silvester. “A number of RTILs were studied to determine the optimum electrolyte.” Because of this effect, the team expected that RTILs with different chemical structures would respond in different ways to humidity, but didn’t know how these differences would manifest themselves.

Hydrophobic layers of cations
To probe the responses of each RTIL, Dr Silvester and colleagues used a technique named ‘cyclic voltammetry’, which monitors the change in current across a substance in response to a periodically changing voltage. In each case, the current across the salts varied significantly in the presence of humidity, with noticeable differences in the responses of RTILs with different structures. These differences in response arose since the cations and anions comprising different salts can have widely varying properties, including their size, and the extent to which they repel water – known as their ‘hydrophobicity’.

“The anion had the most effect on the current response at high humidity levels, consistent with the bulk water solubility,” describes Dr Silvester. “However, the current at lower humidity levels was mostly determined by the cation.” The team determined that these differences in cation responses occur since cations assemble as a layer of positive charges at the electrode to balance the negative charge at the surface. Depending on the structure of the cation, they either form very dense hydrophobic layers that repel water well, or less dense layers with more hydrophilic cations that are not as good at repelling water. 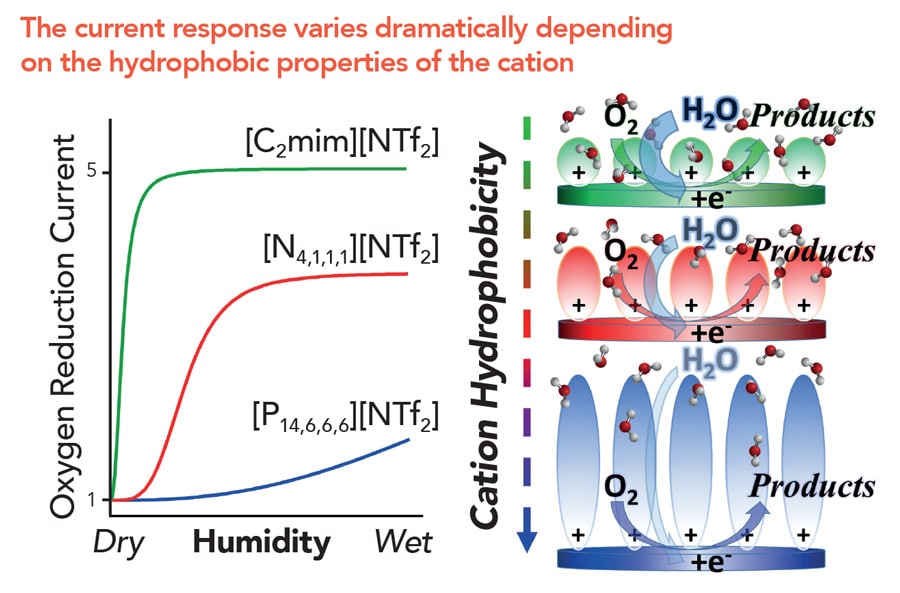 Finely tuned shields
These cation layers have important implications for Dr Silvester’s research. Since RTILs are so varied, her team noted that the properties of the layers they form can be finely tuned by carefully selecting which salt to use. “While there is clear structuring in the absence of water, it becomes disrupted in the presence of water. Small, hydrophilic cations are unable to block the water from reaching the electrode surface, but larger hydrophobic cations can effectively shield the electrode.” This suggested that in order to maintain a stable current as humidity varies, RTILs with more hydrophobic cations are the best choice.

At the same time, they suggest that RTIL cations that are less hydrophobic could be useful for applications other than gas sensing. “Alternatively, if a large change with humidity is desired, like for humidity sensors, then the choice of hydrophilic RTILs could be favourably exploited,” Dr Silvester explains.

Improving electrochemical gas sensors
The team’s discovery has important implications; showing for the first time that by carefully selecting the RTIL to be used, electrochemical gas sensors can be made to be robust against the effects of humidity. “Overall, this work shows the huge dependence on oxygen reduction current simply by changing the RTIL cation and anion,” Dr Silvester summarises. “For applications where a stable current response is necessary, the use of highly hydrophobic and large RTIL cations and anions is recommended.”

The insights gathered by Dr Silvester’s team could soon allow for significant improvements to gas sensors; enabling them be miniaturised and made low cost, but also to maintain stable currents across a wide variety of environmental conditions. Such changes would bring about improvements in a diverse range of applications; including workplace safety, healthcare, and the monitoring of changing ecosystems. 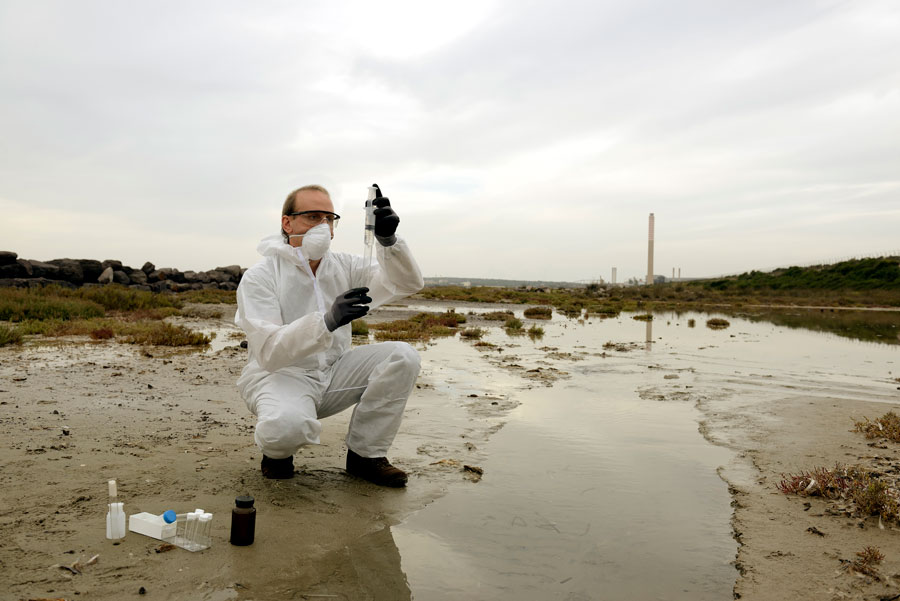 <> This study has revealed that the choice of RTIL cation and anion is extremely important. However, to make RTIL-based electrochemical gas sensors more robust and durable, the use of a liquid electrolyte may not be viable in a ‘membrane-free’ design. Therefore, we are now investigating gelled electrolytes – created by combining ionic liquids with polymers – to form conductive materials that do not flow. The presence of the polymers may also influence the structuring of ions near the electrode. We plan to selectively design the chemistry of both the RTIL ions and polymer to absorb certain gases, to allow improved selectivity over interfering gases and moisture. 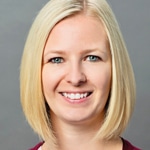 Debbie Silvester obtained her DPhil (PhD) at Oxford University, UK, in Dec 2008. She arrived at Curtin University in Western Australia in 2009. She has had three successive fellowships (Curtin Research Fellowship, ARC Discovery Early Career Research Award and ARC Future Fellowship), and was promoted to Associate Professor in 2018.

The Silvester lab works at the interface of physical, analytical and materials chemistry. The team employs electrochemical methods and materials characterisation techniques to investigate electrode processes, from understanding fundamental behaviour to application-focused research.