Estuary environments are incredibly variable, both spatially and temporally, which can make fish monitoring using traditional sampling gear difficult. Dr Joseph Merz, of Cramer Fish Sciences, has developed a new non-invasive sampling gear for this purpose. The Single-Platform Aquatic Species and Habitat Sampling System (or The Platform) is able to monitor fish communities and their habitat interactions across various habitat types via video capture, without the need for fish handling, reducing potential impacts to sensitive species. This could prove to be a useful tool for evaluating anthropogenic impacts on ecosystems, while helping inform future estuary management.

Estuaries are seasonally variable environments. As a result, the life cycles of many organisms found in estuaries have seasonal patterns of migration, growth, reproduction, and habitat associations. In recent years, there has been significant investment in restoring impaired estuaries to protect sensitive native species. As such, there is a need to quantify changes in estuary habitats, the resulting effects on aquatic organisms, and also to evaluate the success of restoration efforts.

Presently, estuary fish sampling is constrained by what gear is available. Habitats that can be effectively sampled with available gears tend to be sampled more intensively, while other habitats may be under-represented. Trawls are typically used to sample open water, while seines are used to sample beach and nearshore habitats. However, trawls lack manoeuvrability and can cause stress and injury to the fish, while seines are very limited in where they can effectively be deployed. As such, the methods used to monitor fish populations can limit a researcher’s ability to accurately interpret and compare the data collected over time or across different sampling methods. 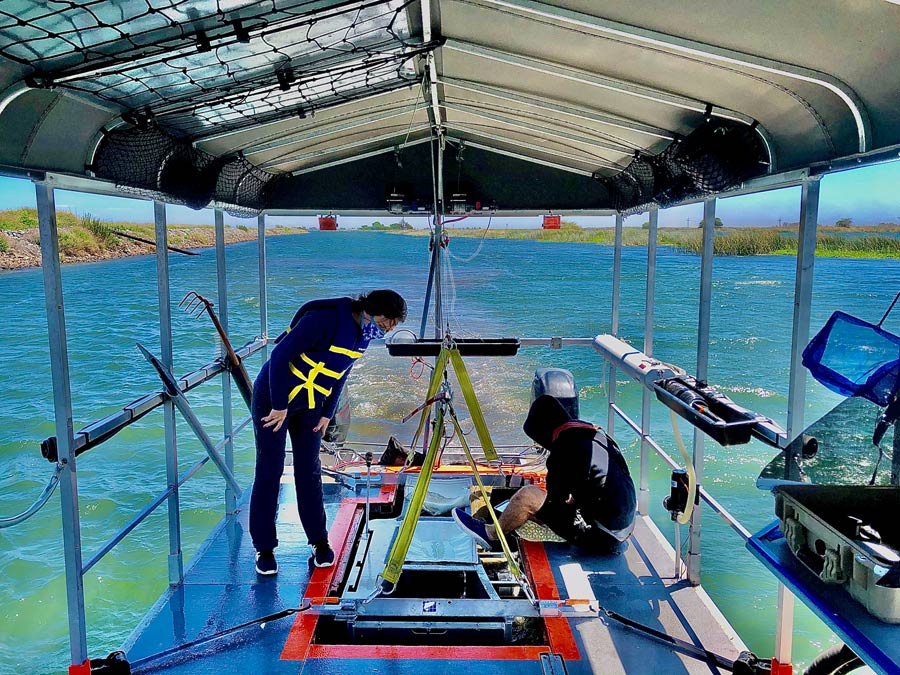 Dr Joseph Merz, of Cramer Fish Sciences, and his team designed the Single-Platform Aquatic Species and Habitat Sampling System (or The Platform), a new and innovative tool for fish monitoring. The Platform can sample both open and shallow water, as well as complex habitats that are beyond the reach of traditional sampling methods. Though it can be used to capture fish for hands-on data collection, it can also function as a non-invasive sampling technique by passively recording fish by video.

Design of The Platform
The Platform is a modified pontoon boat with a concentrator net attached at its front. The sample mouth extends in the front, while the rest of the net passes under the boat. Water and fish are channelled between the two pontoons, where they pass through a removeable live box mounted underneath the deck, before being discharged to the stern of the boat.

The Platform was able to adequately sample fish across habitat types that would normally require multiple types of gear.

Because The Platform funnels fish past cameras in the live box, it reduces the need for in-field handling and processing – recorded video images are analysed after the survey. This improves sampling efficiency across a variety of aquatic habitats and minimises stress, injury, and lethal take of sensitive fish species, enabling researchers to monitor fish communities in a relatively non-invasive way.

The Platform is also equipped with a range of physical monitoring equipment. This allows a variety of biotic and abiotic data, including water-quality metrics and plankton assemblages, to be collected concurrently with fish sampling data – something that would normally require multiple surveys using different methods. In this way, more standardised data are produced, with the ability to relate environmental conditions directly to fish observations.

The study was performed at Mildred Island, a submerged island within the San Francisco Estuary. The estuary is characterised by significant changes over the last 170 years, including the removal of 95% of the historical estuary wetlands for agricultural and industrial use, channelisation and dredging of rivers, and the removal of large woody debris. It is also considered the most invaded habitat on the planet, with large populations of non-native species that have been introduced over time.

The team identified four habitat types within the sample area: open water lake, lake wetland, open water riverine, and riverine wetland. They performed a total of 205 transects using The Platform between 26 July and 31 August 2018. Across all transects, 24,213 fish were sampled in total, with 16 different species being identified. Of those sampled, 94% of the fish species observed were non-native. The Platform was successfully able to capture changes in habitat associations across different life stages for the fish species observed.

The research team was able to demonstrate The Platform’s ability to identify physical distinctions among the four estuary habitats, and to detect the segregation of fish species among these habitats. The study also demonstrated that The Platform is capable of collecting standardised environmental data simultaneously with fish species data. This allows changes in fish communities associated with environmental conditions to be properly evaluated. Accurately detecting such data is critical for efficiently monitoring changes in the ecosystem and appropriately responding to these changes. 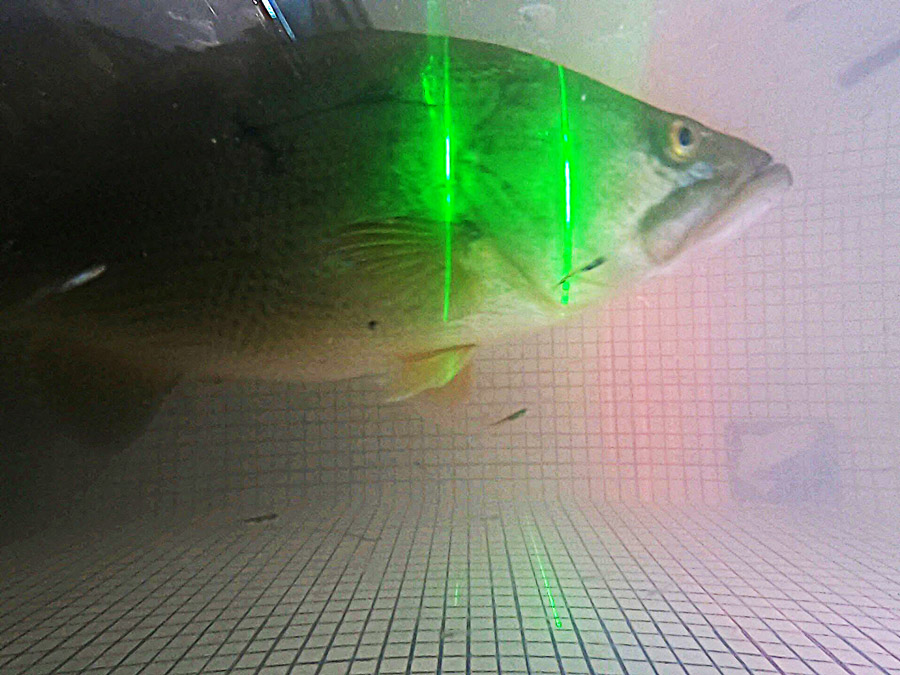 Through this trial of The Platform, the research team showed it to be an effective method of monitoring fish and their associated habitats. They were able to sample small-bodied fish species in a range of habitats using a single method, collecting results comparable to those collected using conventional sampling methods.

The Platform versus conventional sampling
The Platform overcomes many of the challenges associated with the traditional methods used in fish monitoring. For example, seining is often limited by depth and shore access, and is only capable of sampling small water volumes per haul. Meanwhile, trawls are inefficient in comparison to other techniques, as they lack manoeuvrability and can alter the behaviour of the fishes being sampled. In addition, as most conventional sampling methods require capture and handling, they may be associated with significant stress, injury, and mortality of the fishes.

For estuary environments, different sample gears are generally used at different times of the year to reflect the seasonal shifts in fish communities and their habitat use. However, the early life stages of various fish species are often under-sampled by traditional gear because some use highly vegetated littoral habitats that are difficult to accurately sample. In addition, the type of gear used can bias fish capture data based on how effectively the chosen gear samples a particular habitat or species, making it difficult to standardise and compare data across habitats.

Dr Merz and his team conducted a study comparing the performance of The Platform against two conventional monitoring methods, beach seining and Kodiak trawling. Rocks, underwater vegetation, and tree branches can all provide escape routes for fish during seining. However, The Platform was able to effectively sample through woody vegetation during the study, producing accurate results. Due to its increased sampling speed, The Platform was also able to sample a greater volume of water than beach seining over the same period of time. The Kodiak trawl was able to sample a greater water volume, but was much less manoeuvrable, was not able to sample complex habitats, and caught fewer fish per unit of water sampled than The Platform.

Overall, the team found that The Platform was able to adequately sample fish across habitat types that would normally require multiple types of gear. It directly addresses the need for standardised and comparable data across habitats, without the bias associated with using different gears. In addition, because it can collect more individuals in the same amount of time as both trawls and seines, it may prove to be more effective for detecting species that are less common, such as those that are threatened or endangered.

Developing the prototype
The Platform is a prototype and is still undergoing testing and further development. Future and ongoing investigations include refining the automated system for fish identification and size estimation directly from the live box video, as well as expanding The Platform’s depth range. Modifications of the net attachment angle and net height could extend the sampling depth range, allowing for future research comparing The Platform with offshore techniques that sample deeper in the water column.

The Platform provides an effective, novel method for monitoring the spatial and temporal variability of various aquatic habitats. It has the potential to not only evaluate the anthropogenic impacts on aquatic ecosystems, but also to assess the effectiveness of restoration efforts and monitor the effects of management activities on fish communities. This, in turn, could inform future management of these ecosystems.

Do you think The Platform could become the new standard for fish monitoring?

While no one method can sample all habitat and fish community conditions, I strongly believe The Platform’s ability to more accurately relate environmental data and fish species to a specific moment and place is a direction fish monitoring should be headed. The Platform provides an exciting new fisheries science and management tool for evaluating anthropogenic impacts on ecosystems, assessing estuary restoration effectiveness, and monitoring the effects of management activities on fish communities in a more informative ecological context compared to more conventional sampling methods. I believe our results are timely given the increased interest in reducing physical handling of fishes, which may cause stress, harm, and mortality – all undesirable side effects for rare endemic fishes. 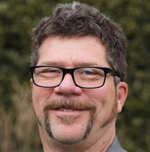 Dr Joseph Merz has over 28 years of experience working for state, city, university, and public entities as an instructor and fisheries ecologist. He has extensive experience with habitat typing, delineation and sampling, developing and implementing revolutionary monitoring equipment and techniques, and has designed multiple habitat-restoration projects. 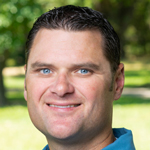 Traversing the minefield: A professional humanitarian for a new world of risk
Arts & Humanities
Read This Article
Reconciling forest and tree conservation with food security
Biology
Read This Article