Genetic sequencing is an affordable screening process that helps people understand the risks of developing a specific form of cancer in their lifetime. They can learn about the impending risks and make conscious lifestyle choices, take a few radical decisions if required, and even work out ways to stop the hereditary transfer of such genes to their offspring. Dr Israel Gomy is taking precision oncology one step ahead: during his post-doctorate at the Dana Farber Cancer Institute in Boston, USA, he and his team were testing and validating a bioinformatic tool with tumour and germline sequencing data that can detect mutational changes. Currently, he is helping people understand their predisposition to different forms of cancer.

Precision oncology is a branch of medical science that deals with comprehensive and robust genomic analysis. Data interpreted from these tests show the probability of cancer occurrence among patients, especially those at risk. With the advancement in technology, there has been a marked increase in availability and demonstrated efficacy of tumour profiling. Using advanced genomic techniques, doctors can not only characterise a patient’s tumorous growth but also develop a personalised approach to treating and managing the patient, as well as preventing their family members from developing it.

Genomic and tumour-specific testing in precision oncology
Pathogenic Germline Mutation (PGV) refers to a potentially deleterious mutation in a tumour suppressor gene (genes responsible for slowing down / stopping abnormal growth of cells that cause cancer). PGVs are known to confer risks of cancer development in a small but substantial section of people on a germline level. PGVs are normally detected by testing blood and saliva, albeit they can also be inferred by the tumour itself.

However, when one chooses to focus only on patients with a known family history or personal risk factors, one may miss divergent but important clinical pointers indicating the person may be at risk at a genomic level, even if this person doesn’t have any obvious predisposition. Since germline mutations are the basis of genetic transfer across generations, it becomes crucial to genetically screen a person with respect to germline mutations to be sure.

A previous study by Huang et al (2018) showed that one in eight adult patients with cancer who underwent universal germline testing, irrespective of them meeting established criteria, had a PGV in a susceptibility gene that would have been overlooked had only familial history and risk factors been considered. Identifying PGVs also changed their therapy options, implying the importance of accurate genomic analysis in personalised medicine.

Using advanced genomic techniques, doctors can not only characterise a patient’s tumorous growth but also develop a personalised approach to treating and managing patients.

Tumour genetic profiling can also be conducted on patients with established tumour tissues to detect specific mutations. Several commercial and academic tumour sequencing assays scan a large set of over 400 cancer-related genes for somatic mutations. Amongst them are more than 50 tumour suppressor genes that can themselves undergo germline mutations, meaning screenings for somatic mutations only are much less specific. Hence, a feasible solution to comprehensively screen a person may be to combine germline and tumour genetic analyses. This approach is backed by scientific evidence; integrating tumour sequencing with matched normal genomic profiling can help identify PGV in cancer predisposition genes for 15–18% of patients with cancer, including those without a high-risk family history, or who don’t meet clinical criteria for standard germline testing (Mandelker et al, 2017; Samadder et al, 2020).

Addressing the challenges
The concept of universal tumour/germline sequencing analyses is futuristic and does not match the current state of the art. In most practical cases of tumour-only sequencing, patient-matched DNA samples (blood/saliva) are not available for testing. There is an unmet need for objective and reliable means of identifying patients for clinical germline testing from tumour-only samples. Current practices in interpreting tumour-only data are gene-specific and subjective to variant allele frequency (VAF) criteria that determine its somatic / germline nature. The VAF varies across tumour types. The process requires expert review and results in poor specificity in exclusion of somatic variants and a significantly decreased overall accuracy.

To address these challenges, Dr Israel Gomy was working together with a team that included, among others, his mentor Dr Judy E Garber at the Dana Farber Cancer Institute in Boston as well as Dr Nahed Jalloul and her mentor Dr Hossein Khiabanian, based at Rutgers Cancer Institute. They examined the performance of a gene-independent, information-theoretic pipeline aimed at accurately categorising the variants identified by tumour-only sequencing as somatic or germline. The team used commonly available sequencing data and analysed each variant in the context of the specimen’s proportion of tumour cells. They also used high-depth sequencing data to predict loss of heterozygosity (LOH) status, which can potentially inform the functional effect of the mutation in both germline and somatic variants.

Tumour-only sequencing data from 1,608 patients was retrospectively analysed to infer germline versus somatic status of variants using a theoretic information-based, gene-independent approach. Tumour-only sequencing detected 3,988 variants across 70 cancer susceptibility genes with available germline testing data. The method successfully inferred germline versus somatic status for >75% of all detected variants using available sequencing data, with a sensitivity of 65%, specificity of 88%, and overall accuracy of 86% for pathogenic variants. False omission rate was at a minimal 3%, in misclassifying true PGV. Tumour-specific sequencing data retained a higher portion of PGV in known hereditary tumour suppressors with loss of heterozygosity in the tumour specimens (72%) as compared to variants of uncertain significance (58%).

Key takeaways
While deriving upon clinically relevant information from sequencing data, one needs an accurate annotation of somatic and germline alterations by comparing the sequenced data from the tumorous tissue to a normal sample from the same patient. This process can also help identify somatic events that affect the genes with a PGV resulting in biallelic inactivation.

Dr Gomy’s and Dr Jalloul’s team in this study successfully validated the ability of a theoretical-gene-independent bioinformatic tool to infer the germline versus somatic status of mutations from tumour-only sequencing data, using germline testing analyses. This dataset used commonly available measurements from tumour sequencing (like the total depth, focal ploidy, and VAF) capable of selecting the most likely germline versus somatic mutational status and assess evidence for LOH. By analysing each variant in the context of specimen purity, the team eliminated the need for ad hoc VAF criteria or complex analyses of raw sequencing data.

Misclassifying a true somatic mutation becomes equal to the cost of performing germline testing, which can shed light on the inherent status of genetic, germline mutation. However, failing to identify the presence of a germline mutation may result in ignoring the key mutational information that is critical to conducting subsequent tests on family members to trace the inheritance of mutations, discover members at risk of developing such cancers in future, as well as hamper a personalised treatment strategy for the patient.

Hence, this method comes as a landmark in detecting PGVs in a range of malignancies without obvious pointers. Tumour-only sequencing data is sufficient to determine PGV in cancer predisposition genes. Hence, when a PGV is detected in a tumour specimen, the patient needs to be considered for genetic counselling and confirmatory germline testing. The germline vs somatic mutational status and the LOH obtained from the analysis helps experts to make clinically relevant, personalised treatment decisions, especially in applications like Molecular Tumour Boards.

In your opinion, should genetic testing be made compulsory for people with cancer?

Rather than being made compulsory, I believe that genetic testing should be implemented in an equipped personnel cancer institution (with bioinformaticians, biostatisticians, pathologists, geneticists, genetic counsellors, etc.). I think universal tumour/germline testing for all advanced cancer patients will eventually become a reality with cost-effectiveness and clinical utility.

My next project is the implementation of these tools in Molecular Tumour Boards in Brazil.

Predicting the origin of mutations from tumour and germline data was last modified: March 4th, 2022 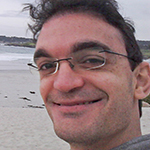 Dr Israel Gomy completed his post-doctorate in Cancer Genetics and Prevention at Dana-Farber Cancer Institute/Harvard Medical School, Boston, USA, in 2021. He holds two doctoral degrees – one in oncology (A.C. Camargo Cancer Center, Sao Paulo, Brazil) and another one in medicine (Pontificia Universidade Catolica do Parana, Curitiba, Brazil). Dr Gomy specialises in medical genetics and cancer genetics and is currently working on the application of precision prevention in detecting an individual’s predisposition to different forms of cancer.

Dr Israel Gomy is studying our precise predisposition for developing cancer with the help of a bioinformatic tool based on tumour and germline sequencing data.

Gomy I. (2022). Predicting the origin of mutations from tumour and germline data. Research Outreach. Available at: https://researchoutreach.org/articles/predicting-the-origin-of-mutations-from-tumour-and-germline-data/ (Accessed YYYY/MM/DD)