Despite the immense potential benefits of nuclear power, many people are understandably concerned about the dangerous radioactive waste (or radwaste) it generates. To provide reassurance that nuclear waste is being safely stored, Dr Paolo Finocchiaro and colleagues at Italy’s National Institute of Nuclear Physics (INFN) have developed an advanced new system for monitoring the material’s radioactivity in real-time. Using distributed networks of robust sensors, their radiation monitoring system accurately detects the presence of various radioactive substances in simulations and tests, a capability the team hope to expand to real-world scenarios in future research.

Within cores of enriched radioactive material, unstable atomic nuclei will spontaneously decay, transforming into different nuclei and emitting radiation in the form of helium nuclei (ie, alpha particles), electrons, and high-energy gamma rays. A particular type of decay is nuclear fission, where a heavy nucleus splits apart into a pair of smaller nuclei and emits gamma rays and two to three neutrons.

If carefully controlled, this radiation can be used in a wide range of applications, from targeted cancer therapy to detailed imaging of microscopic systems. Alternatively, initiating fission inside a nuclear reactor by means of neutrons can provide an abundant source of carbon-free energy. Yet despite the clear advantages they bring, technologies based on nuclear fission are well known for the dangers they present if stringent safety precautions aren’t taken.

Among the most pressing concerns is the generation of nuclear waste. Nuclear waste is usually a by-product of nuclear fission reactors, but it can also be generated through industrial processes and medical applications. The problem here is that the nuclei resulting from fission are typically radioactive themselves, and will only decay into less harmful substances over a certain period of time – which can vary significantly depending on the material’s composition.

‘Unfortunately, the timescales we are talking about can range from a few hours to years for medical and industrial radioactive waste; and up to tens of thousands of years for high-level waste from nuclear fission reactors,’ describes Dr Paolo Finocchiaro from Italy’s National Institute of Nuclear Physics (INFN).

This material would be incredibly harmful if exposed to human populations or natural ecosystems due to its radioactivity. As a result, it can only be managed and transported by the most qualified experts, with strict radiation monitoring protocols, and must be sealed away in some of the most secure locations on Earth – completely sealed off from the outside world.

The team were interested in measuring two different radiation types, which can penetrate through the drums used to contain nuclear waste.

‘As mishandled radioactive waste could contaminate the environment or, far worse, be used for the production of weapons, there are now regulations all over the world prescribing how the waste must be handled and stored,’ Finocchiaro continues.

In many cases, national laws demand that nuclear waste must be kept in repository chambers located deep underground. These are often carved out from dense, geologically stable rock. To eliminate any risk of contamination, these chambers must be far out of reach from natural groundwater systems and from the biosphere. The geological repositories are to be used for spent nuclear fuel and High Level Radwaste (radioactive waste) that have to stay 30–50 years in interim storage before going into deep geological repository. Low and Intermediate Level Radwaste are stored in surface or subsurface storage sites, and these kinds of waste are the most abundant.

Even when it is safely stored, this material must be intensively monitored. ‘Whatever its origin, the waste ends up in special drums that have to be placed into short- or medium-term repositories, where they are periodically inspected by operators,’ Finocchiaro explains. ‘A few specific radiation detectors placed inside a repository are then used to keep the local environment under control.’

This system is working for now, but the issue of nuclear waste storage is still highly contentious among politicians and the general public, who are widely concerned about the catastrophic damage that could unfold if any mistakes are made.

This view certainly isn’t shared by everyone: the governments of Finland and Sweden, for example, are confident enough in existing storage and inspection procedures to commit to large-scale, long-term storage in underground repositories.

Scientists trust the exponential decay law of radioactivity: the dangerousness of radioactive waste, contrary to chemical waste, will decrease if stored for a long enough time. With comprehensive radiation monitoring, radioactive waste can be stored safely. However, the general population doesn’t always share this trust.

All the same, the debate has so far been one of the main barriers to the more widespread adoption of nuclear power, despite its clear benefits as an abundant source of carbon-free energy. To reassure the public, Finocchiaro’s team recognise a need for more advanced monitoring procedures, which make use of the latest advances in sensing technologies.

As part of the Measurement and Instrumentation for Cleaning And Decommissioning Operations (MICADO) project, funded by the EU, Finocchiaro and his colleagues at the INFN’s Southern National Laboratories (LNS) draw upon advanced techniques based around networks of distributed sensors.

By collecting the information gathered by sensors into a single database, these systems provide a powerful tool for monitoring repository environments – beyond the capabilities of existing inspection techniques. ‘At INFN-LNS, we have proposed a system, named DMNR (detector mesh for nuclear repository), for the online, real-time monitoring of the radioactive waste repositories,’ Finocchiaro illustrates. ‘It consists of an array of many radiation sensors, which are deployed all around the drums of radioactive waste.’

In this case, the team were interested in measuring two different types of radiation, which can penetrate through the drums used to contain nuclear waste. Firstly, they studied the neutrons that can be produced as a by-product of the radioactive decay of atomic nuclei. Since these particles don’t carry any charge, they rarely interact with material in the drum, allowing them to easily penetrate through to the surrounding environment.

To capture these particles, Finocchiaro’s team designed a detector named ‘SiLiF’: composed of a solid-state silicon diode, coupled to a thin layer of salt, composed mainly of a lithium isotope. As it captures incoming neutrons, this salt produces both an alpha particle, and a nucleus of the hydrogen isotope, tritium. Subsequently, these particles produce an electric signal in the silicon, allowing the sensor to register when a neutron has been detected.

Secondly, the researchers aimed to capture the gamma rays produced during the radioactive decays. These photons can penetrate through dense, solid materials far more easily than other electromagnetic waves. Named ‘SciFi,’ this detector was made from a scintillating fibre, which produces tiny flashes of visible light when hit by gamma rays. Such tiny flashes are detected by ultra-sensitive devices called silicon photo multipliers (SiPM) coupled to both ends of the fibre.

Having tested the performance of each sensor through simulations, Finocchiaro and his colleagues next aimed to examine their applicability to the real-time monitoring of radwaste storage sites. As Finocchiaro explains, both SiLiF and SciFi would need to satisfy a stringent set of requirements. ‘In order to be suitable for mass deployment, these detectors have to be compact, reasonably inexpensive, robust, easy-to-use, and reliable,’ he says. ‘The sensors we describe possess all of these features.’ 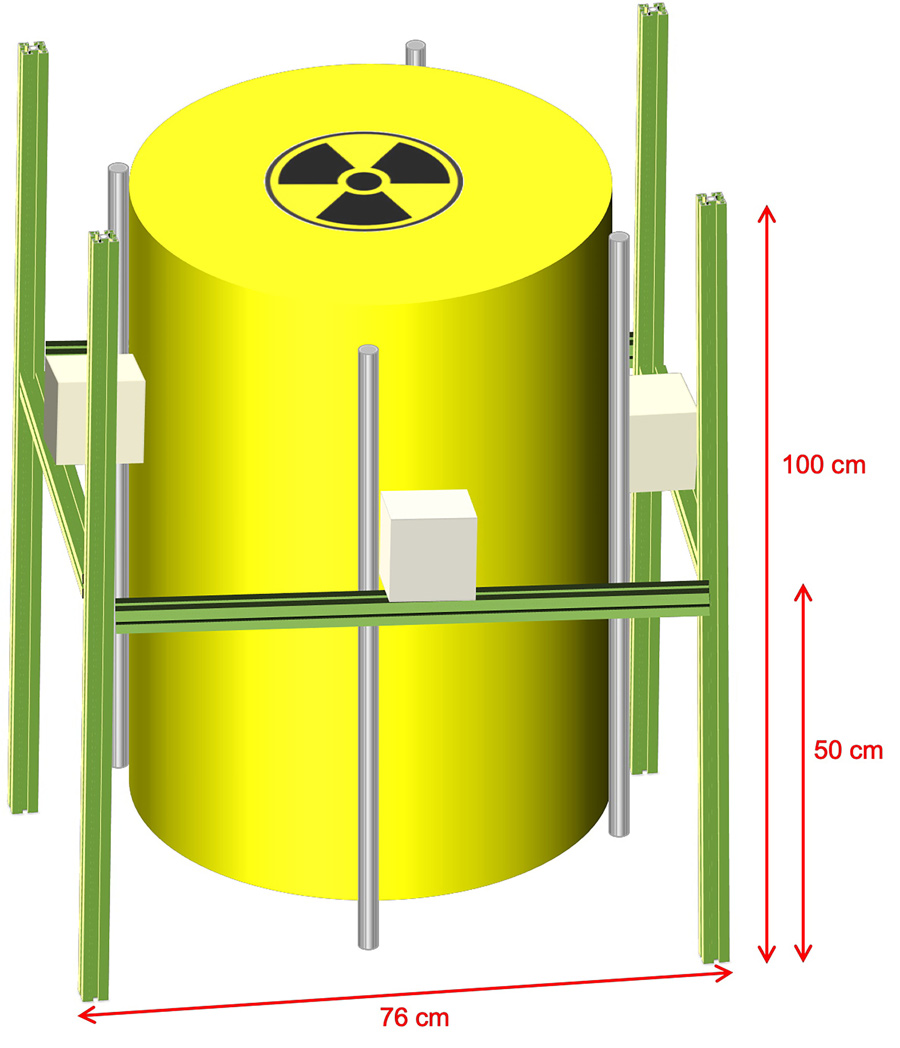 Having probed SiLiF’s responses using artificial sources and neutron beams, the team estimated that a distributed network of the sensors would be sensitive to small amounts of highly radioactive plutonium inside a drum of nuclear waste. In parallel experiments, an array of SciFi detectors were able to locate radioactive isotopes emitting gamma rays.

Building on the successes of these initial tests, Finocchiaro’s team are now going to apply both sensors to monitoring waste in real storage scenarios. By surrounding drums of nuclear waste with arrays of SiLiF and SciFi sensors, they aim to gather accurate information about any change occurring inside that would indicate possible anomalies.

This kind of monitoring is currently performed manually at long time intervals, whereas the proposed automatic real-time monitoring system will improve the data quality while minimising the risk to the operators. Moreover, in the event of an unlikely accident, a real-time alarm would prevent severe consequences by alerting operators to early signs of anomaly.

Alongside MICADO, the potential for this technology is also being explored by two additional EU-powered projects: named Pre-disposal Management of Radioactive Waste (PREDIS), and Cyber Physical Equipment for Unmanned Nuclear Decommissioning Measurements (CLEANDEM).

With such a high level of support, the researchers hope that the real-world application of their approach may not be too far away. If achieved, this could enable the operators of nuclear waste sites to glean continual streams of accurate and detailed data in safer operating conditions, rather than relying entirely on periodic inspections.

These more robust techniques could provide the public with extra reassurance that nuclear waste is being safely monitored – potentially providing more governments with the confidence they need to expand their rollout of nuclear power. In turn, the technology may provide a small but important step towards the more widespread adoption of nuclear power, expanding what has so far remained one of the most under-used tools for reducing our greenhouse gas emissions.

How might your sensor systems detect that something has gone wrong during waste storage and transport?

Three or four detectors of each kind, suitably arranged around a drum, count the number of outcoming neutrons and gamma rays per unit time. Any change occurring in counting rate, ie, asymmetry between the detectors’ behaviour, hint at a change occurred in or to the drum: corrosion, cracks, internal displacement of the content, or tampering. 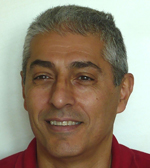 Dr Paolo Finocchiaro is a senior nuclear physicist at INFN-LNS. He has led many fundamental and applied physics research programmes. Finocchiaro is currently involved in three EU-funded projects about radwaste and is the author of about 300 articles on physics and technology.

Dr Paolo Finocchiaro and his team are developing radiation detectors for scientific and industrial applications. 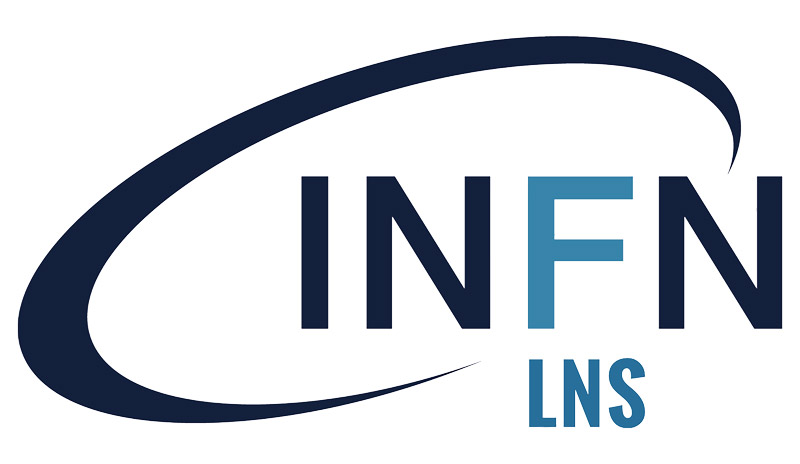