Biology
Biologists are increasingly appreciating the importance of bioacoustics in conservation. By understanding the soundscape of an environment we can learn far more than previously thought. This is also the case for animal behaviour, a classic example being echolocation in bats and dolphins. Dr Alyssa Accomando, from Brown University and the National Marine Mammal Foundation, is studying echolocation to determine how these animals navigate the environment around them and what we can learn from this process.

Echolocation is one of nature’s great superpowers. It is a type of sonar, where sound is projected by an animal and travels through the environment interacting with objects on the way. The sound is reflected by these objects, producing echoes. Echoes from these objects heard by the animal provide information on each object’s size, distance, and shape. Although we commonly associate echolocation with bats and dolphins, it’s also used by orcas, sperm whales, and even some humans. There are also studies of echolocation jamming from tiger moths, who disrupt the sonar emitted by bats to avoid detection.

But why is all of this important? First, it is important to the animal because it is how they navigate their environment and find food. Unravelling the code of echolocation will allow us to better understand the behaviour of animals such as the bat, and any differences in echolocation techniques that exist between species. This can help conservationists improve environmental design in areas such as reserves or zoos, or to improve location choice for any species reintroduction programmes. It also helps zoologists understand a species’ dietary preferences, communication, and predator avoidance and prey capture.

Secondly, we can use the principles of echolocation in our everyday lives and technological advancement. For example, some fishing boats use sonar to locate shoals of fish and the same technology can be used to help people who are blind to ‘see’. In fact, drones themselves are used in conservation efforts, for example searching for dolphin populations, or studying rainforest canopy cover, so the improvements to this technology that come from nature positively feed back into helping nature itself – quite fitting really.

Bat echolocation
By using ultrasonic microphones, scientists can record and analyse bat echolocation sounds. Dr Alyssa Accomando from Brown University and the National Marine Mammal Foundation is doing just this. She is looking statistically at the relatedness of patterns of bat echolocation pulses in a way people haven’t tried before.

Dr Accomando had to first understand how bats echolocate while performing different behaviours. The normal way to measure echolocation patterns is to look at the time between pulses, or the IPI (Inter-Pulse Interval). Differences in IPIs can then be used to group echolocation signals into different functions. For example, when hunting, the bat emits increasingly frequent pulses (shorter IPIs) to home in on prey, and then a rapid burst just before the catch. The same behaviour is shown in dolphins. However, these patterns can change when the surrounding environment is cluttered and contains many obstacles.

In these very “busy” environments, bats emit ‘doublets’, or two echolocation pulses, one just after the other. Each pulse produces echoes that reflect back to the bat from near and far objects. But this produces a challenge because it can be difficult to interpret which sound is the first echo from the second pulse, and which is the second echo from the first pulse. This is also a common problem in many technological sonar applications.

A corridor of chains
To understand how bats solve this problem, Dr Accomando set up an experiment. This involved a corridor lined with chains hanging from the ceiling and acting as obstacles. The bats would fly through the corridor, and she designed three corridors of decreasing width to provide different degrees of challenge. The species she used were big brown bats, Eptesicus fuscus. Bats not only produce doublets of echolocation signals, but can also produce (less frequently) singles, triplets and quadruplets.

The first task for Dr Accomando was to deduce which pulses belonged to what group and how many were produced under the different corridor conditions. Bats in the narrower corridors emitted fewer doublets, and more singlets, triplets and quadruplets relative to that observed in uncluttered environments. Also, the IPI decreased with corridor width, for a more rapid stream of sound, suggesting that it’s valuable for a bat to receive more echoes, even if it means deciphering the ambiguous source of echoes that comes with a faster echolocation signal production rate.

We are now coming to terms with the fact that sounds in nature hold a huge amount of information and can be valuable indicators of ecosystem health, change, and mechanism.

However, it could also be the case that the alternation of IPIs might have something to do with how the bats ignore these echoes. The fact that the IPI structure changed from primarily doublets, to a greater mixture of pulse groups suggests that by changing the number of pulses per group, the bats were able to more easily identify the source of echoes – exactly how this is done remains a mystery for now.

Remembering pathways
Using something called a Spike Train SIMilarity Space (SSIMS) analysis, Dr Accomando spatially mapped the different pulse patterns and compared their similarity. SSIMS is a mathematical method used to analyse neural pulses but can also be applied to echolocation. It works by comparing two patterns of pulses and attributing a ‘cost’ every time a pulse has to be moved, inserted or removed, in order to make the two patterns identical.

Firstly, she changed the shape of the corridors to see how adding a level of difficulty (straight, S path, and reverse-S path) would affect the bats’ echolocation pulse patterns. Secondly, bats were tested multiple times when the corridor shape was consistent across trials, or when it was randomly changed. This was done to investigate whether bats remembered their environment from trial to trial.

Interestingly, the bats hardly changed their echolocation patterns in the curved paths, whether random or fixed. However, when the straight path was changed, the bats’ echolocation pattern was different compared to when the straight path was maintained, suggesting they can treat a space differently when it is new compared to when it is a path that was recently seen.

Further study will involve testing different species of bat. This will answer the question of whether alternative behaviours have evolved in different species to deal with obstacles, and how these species’ techniques might relate to their specific environment.

Taking things underwater
Dr Accomando also wants to apply this knowledge under the water to bottlenose dolphins (Tursiops truncatus). Rather than obstacle avoidance, which is not really an issue for dolphins in the ocean, she wants to see whether the click patterns in dolphins can predict prey-catching behaviour. Little is known about how the changing ocean environment impacts the ability of dolphins to catch fish. Dolphins, much like bats, emit a ‘terminal buzz’ just before capturing prey. A more rapid burst of clicks called a ‘burst-pulse’ is emitted just after prey capture, but it has been recorded that some dolphins emit this early, pre-empting a successful capture.

The echolocation sounds produced by dolphins are commonly called “clicks.” Using the same SSIMS analysis as with the bats, Dr Accomando can compare the ICIs (Inter Click Intervals) in the series of clicks produced by each dolphin, called the click train, and be able to spatially separate different pre-, and post-prey-capture echolocation patterns.

The experiment would involve using a GoPro to confirm normal fish captures, and ultrasonic hydrophones (underwater microphones) to listen to echolocation clicks. Dolphins would be trained and rewarded for retrieving a target placed in the water by an animal trainer. On occasion, the target would be randomly removed just before capture. The goal of the study is to determine whether dolphins produce different sound patterns if the prey escapes compared to if the prey is captured.

Burst-pulses are communication sounds produced by dolphins, and SSIMS analysis might also be able to help quantify sounds that are not used for echolocation but which are similar in the way they are produced. For example, new research suggests that burst pulses have timing patterns that might be used to identify individual narwhals in the wild (Blackwell, et al., 2018).

… [bats] can treat a space differently when it is new compared to when it is a path that was recently seen.

Understanding echolocation behaviour is an important step towards completing a fuller picture of environmental bioacoustics. Previous ecological and zoological studies, which are primarily terrestrial, have heavily focused on the use of vision and olfaction in an animal’s interaction with their environment. There has been relatively little emphasis on bioacoustics. We are now coming to terms with the fact that sounds in nature contain a huge amount of information relevant to animals and can be valuable indicators of ecosystem health, change, and mechanism. The work from ecologists and behavioural neuroscientists such as Dr Alyssa Accomando will not only help us better understand how animals use sound to obtain information about and interact with their environment, but will also help improve sonar technology and facilitate wildlife conservation based on bio-acoustic information.

Why do you think the bats’ echolocation pattern differed on variable straight paths rather than the curved paths?

<>I think that, since they had the most experience flying the straight path, combined with fewer physical demands like turning in a narrow space, this was the least difficult for them to navigate. However, when the bats flew down a straight path after having just flown in more difficult curved paths only a minute beforehand, that element of uncertainty about what they would face when released into the flight room led them to treat the relatively easier straight path more similarly to the curved paths. This makes sense because bats could collide with obstacles and emitting more sound groups gives them more information to avoid that.

Reading between the clicks: A new approach to echolocation was last modified: May 22nd, 2019 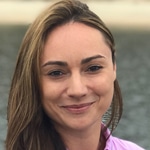 Alyssa Accomando is a research scientist at the National Marine Mammal Foundation, where she conducts neuroscientific research with bottlenose dolphins. She earned her PhD studying big brown bat biosonar at Brown University. Her research aims to understand how dolphins and bats process acoustic signals resulting from echolocation.

Accomando, A., 2019, "Reading between the clicks: A new approach to echolocation", Research OUTREACH (106). Available at: https://researchoutreach.org/articles/reading-between-the-clicks-a-new-approach-to-echolocation/ (Accessed YYYY/MM/DD)