How does the world around us work, and what is real? Such questions are not only central to scientific and philosophical discourse but have been circulating since the dawn of human existence. Peter Verheyen of the Sola Society and Academy at Vienna University, Austria, explores the notion that the conscious reality we experience as human beings is drawn from the information constantly emitted from the real physical world. Thus, it may be argued that the real physical world is akin to a giant quantum computer that gives rise to consciousness itself.

Questions concerning reality have plagued human consciousness since the dawn of our existence. Philosophical and scientific researchers toy with questions such as ‘what is real?’ in a variety of ontological and epistemological manners, using a broad array of methods. Such questions, of course, only give rise to subsequent questions pertaining to the reality of consciousness itself. Is consciousness a product of the human body (ie, the brain), or is it perhaps a deeper, even spiritual, matter?

Peter Verheyen of the Sola Society and Academy at Vienna University in Austria focuses his research on the idea that the conscious reality we experience every day as human beings is a product of the information continuously emitted from the real world that must adhere to the physical laws of the world. Thus, he argues that the real physical world in which we live is analogous to a giant cosmic quantum computer that enables the existence of human consciousness itself. Here, we explore Verheyen’s ideas.

The building blocks of reality
Quantum mechanics was born out of the intense quest for a description of the infinitesimal, to find smaller and smaller measurements of physical reality. It was Niels Bohr who eventually perfected the theory, when he described the atom as consisting of a positively charged atomic nucleus with negatively charged electrons orbiting around it, like a mini solar system.

Rolf Laundauer argues that for information storage and transfer to occur, physical systems are required. Verheyen agrees and writes, ‘information is real and, therefore, must obey physical laws’. Information is the building block of the universe and the destruction of information costs energy and has fundamental physical consequences. It cannot, after all, merely be lost.

It was John Wheeler who first started using information to describe reality. He argued that the universe is characterised by ‘it from bit’. In other words, a physical object (‘it’) always consists of ‘bits’. It is argued by many scientists that bits of information (or qubits) are a more fundamental building block of reality than quarks and electrons. Although a qubit is not a physical object, it contains information about the physical object. According to Verheyen, this insight alone has significant consequences for our understanding of reality.

Consciousness must have developed together with the very first life itself, as a notion and awareness of the environment are essential to survival.

Entropy and human life
Verheyen explains that, according to the second law of thermodynamics, the entropy of an isolated physical system can never decrease. This law is regarded as the physical law with the greatest impact outside the realm of physics itself. Based on this law, Claude Shannon introduced the concept of entropy as a measure of information content in 1948. The second law of thermodynamics could therefore be redefined thus: entropy, a measure of the amount of information in a system, must always increase.

Verheyen claims that ‘the universe is consistently yearning for an increase in entropy and information processing’, in order to keep it moving along. This increase makes the universe a bustling place where life such as the one we experience can arise. The biochemistry of our life, and indeed all life that we know, has an essential basic property in the known universe, which succeeds in keeping its entropy low. It is Verheyen’s belief that ‘life is therefore capable of violating the second thermodynamic law of entropy’.

To elaborate, Verheyen illuminates the fact that life miraculously manages to prevent equal distribution of matter and energy. Should this occur, all biochemical processes would stop, and life would cease. Being alive means retaining energy within the body and using it when we interact with the world, as opposed to constantly sharing it with the world through the process of entropy. ‘Growing old and dying, for every living thing on Earth, means no longer being able to keep entropy low’, writes Verheyen. ‘There is a biological malfunction in the biochemical machinery of the human body; its fundamental processes fail and lead ultimately to death.’ Then, the familiar second thermodynamic law of entropy resumes order as energy and information is transmitted from the decaying human body. Therefore, keeping a low entropy is a basic, fundamental property of life itself.

Information and consciousness
Verheyen acknowledges that the average human body contains around seven octillion (a 7 with 27 zeros) atoms and that they all seemingly ‘know’ exactly what to do in order to successfully perform their function. Hidden webs of information must, therefore, be guiding the atoms and molecules in their biochemical reactions, while at the same time obeying the laws of quantum physics. All this occurs within the subsystems of the cellular machinery.

The brain holds a mask in front of reality, a mask that we can understand. Meanwhile, the real world of information lies concealed.

Progressive brain research has shown consciousness to also be a distinctly biochemical concept (in the same way that the physical atoms of the body are). The brain is characterised not only by signal transfers and action potentials, but also by chemical information transfers via synapses and neurotransmitters. Via the senses, information from the perceived world is sent through the nervous system to the thalamus, which is the initial processing unit of the brain. From here, the different kinds of information are sorted – visual information is sent to the visual centre, sound information to the auditory centre, etc.

‘If the universe produced brains, why can’t the universe itself be a giant super brain?’ is Verheyen’s ultimate question. Everything that we call real is composed of measurements so tiny that it would be difficult to call them real in themselves. Our senses are merely biochemical measuring instruments that turn imperceivable matter into perceptible things that we can know and understand. They don’t reveal reality to us, so much as help us to survive.

The real information emitted from the universe is interpreted in the brain, rather than directly perceived. The brain holds a mask in front of reality, a mask that we can understand. Meanwhile, the real world of information lies concealed. The deepest layer of reality is made up of information, information that we too are made up of. As Verheyen puts it in a remarkably concise formulation, ‘a scientist studying atoms, is a group of atoms, studying themselves.’

Consciousness, which emerges from the exchange of information via chemical and electrical signals in the brain, allows life to have a notion of awareness of its environment. The brain, the most complex piece of matter in the known universe, creates reality. It is in this sense that Verheyen argues that the universe itself is a giant cosmic computer and that we in fact live within a ‘virtuality of the real’, as if in a game played out on that cosmic quantum computer.

Can we ever know and perceive the ‘real’ emitted information of the world, and not merely the illusory perceptions that the brain creates in order for us to have an awareness of our environment?

As Carl Sagan put it, ‘We are a way for the universe to know itself’. From the very first moment humans had language, enabling them to think and imagine things, we were speculating on reality and our origin. Gradually we became more successful at it. The ultimate goal of the game is finally discovering our origin and giving it all a meaning, including the universe and its emitted information.

Reality, information, and consciousness: The universe as a cosmic quantum computer was last modified: September 2nd, 2022 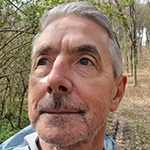 Peter Verheyen is co-founder of Sola Society and Academy. He is a lecturer in postgraduate education in laser physics and treatments. He is also author of scientific articles, case reports and books, a reviewer of medical journals, and co-organiser and lecturer of international conferences and congresses.

Peter Verheyen explores the idea that the universe is a quantum computer.