The traditional image of a scalpel-wielding surgeon is rapidly becoming outdated. Rather than the long-established methods of open surgery, many physicians now prefer to use minimally invasive techniques where possible.

One common minimally invasive method is laparoscopic surgery, which is sometimes known as keyhole surgery. This technique uses an instrument called a laparoscope. A laparoscope is a long, thin tube with a light and a camera. The laparoscope is inserted through a small incision and the camera captures video that the surgeon views on a screen. This allows the surgeon to carry out the operation without making a large surgical incision, as would be typical in open surgery. For the patient, laparoscopic surgery normally means a shorter recovery time and less pain, bleeding and scarring, compared to traditional open surgery.

The benefits of minimally invasive surgery
Dr Mejia, as a specialist liver surgeon, is an expert in minimally invasive liver resection (MILR) techniques. A resection is an operation where all or part of an organ, or a piece of tissue, is removed. A patient might need a resection if they have a liver tumour, for example. MILR techniques can include both hand-assisted and full laparoscopic procedures, or a robotic resection.

Minimally invasive techniques have proven benefits. Research has shown that, in comparison to open surgery, MILR reduces pain, blood loss, bile leaks and other complications. It also results in a shorter hospital stay. Although some studies have suggested that the robotic approach gives the best outcomes for the patient, exactly which type of MILR – laparoscopic or robotic – produces the best results remains unclear.

To try to answer this question, Dr Mejia and his colleagues decided to compare the different types of MILR. They aimed to compare both surgical outcomes and use of hospital resources for three different MILR techniques.

Advancing liver surgery: which minimally invasive technique is best?
Dr Mejia and his team compared full laparoscopic, hand-assisted and robotic liver resections. Full laparoscopic surgery relies solely on the laparoscope and other instruments inserted through one or more small incisions. In contrast, hand-assisted laparoscopic surgery allows the surgeon to use their non-dominant hand, via a separate incision, for certain parts of the procedure. This can improve the surgeon’s hand-eye coordination, as well as providing tactile feedback. Finally, robotic liver resection uses a sophisticated, fully robotic surgical system. The camera and other surgical instruments are operated by the robot, which the surgeon controls from a console.

Dr Mejia and his colleagues examined a total of 214 liver resections that took place at the Methodist Dallas Medical Centre between 2005 and 2018. This included 98 fully laparoscopic cases, 73 hand-assisted and 43 robotic resections. The robotic cases dated from between 2013 and 2018.

Two types of resection were considered. Minor resections are those in which up to two Couinard sections (the eight segments of the liver) are removed. Major resection involves the removal of three or more segments. The patients in the study included 160 cases of minor resection and 54 cases of major resection.

Dr Mejia believes that, for minor resections, the robotic technique will become the standard of care.

As the team is based in the US, they also looked at room and board charges for each patient. This allowed them to compare the demands on hospital resources arising from each of the three types of procedure.

Robotic surgery has clear benefits
Dr Mejia and his team found that patients who underwent robotic surgery for minor resections had a significantly shorter hospital stay, compared to hand-assisted laparoscopic surgery patients. This supports the results of previous studies, which have found shorter lengths of stay for robotic surgery cases. However, Dr Mejia’s study is the first to compare differences between minor and major resections using MILR.

Overall, hospital charges were lowest for patients who were treated with full laparoscopic surgery for a minor resection.

As only 54 cases of major resection were investigated, the researchers were able to draw fewer conclusions. However, they did discover that, for major resection patients, the full laparoscopic group experienced the least blood loss, and also incurred the lowest charges for room and board.

What drives the best clinical outcomes?
The researchers suggest that outcomes for the patients may depend more on the type of resection – major or minor – than the MILR method chosen by the surgeon. Nevertheless, Dr Mejia believes that, for minor resections, the robotic technique gives the best results. A key factor in this opinion is the reduced length of hospital stay for these patients, a good indicator of a shorter recovery time. As well as the clinical benefits identified by this study, the technological capabilities of the robots – including magnification, dexterity and 3D optics – give a clear advantage over the other types of MILR.

Robotic surgery may well also give the best results for major resection patients. However, more research is needed for a definitive answer on this.

Balancing the costs vs benefits
For both minor and major resections, operating costs were higher for robotic surgery (even without including the expensive annual maintenance fees for the equipment) than for full laparoscopic surgery. There was little difference in charges between robotic and hand-assisted laparoscopic surgery. However, patients who underwent robotic surgery incurred lower pharmacy costs, suggesting they suffered lesspain, and needed less pain relief, than other patients.

The liver surgery learning curve
The researchers acknowledge that their study has a few limitations. The sample sizes of both the robotic surgery and major resection groups were relatively small. Also, the surgeons who carried out the operations would have experienced a learning curve over the 13 years covered by the study. As all the patients were operated on by the same surgical team, those in the later years of the study would have benefitted from many years of accumulated experience.

Dr Mejia and his team emphasise that patient outcomes may depend more on the severity of the resection that is needed than on which type of MILR is chosen by the surgeon. Even though robotic surgery has some clear clinical benefits, all types of MILR actually resulted in very good outcomes. No one technique appears to be greatly superior to the others.

So, what is the next step? Dr Mejia suggests that randomised clinical trials are needed in order to decide which of these three techniques is truly the best. In the meantime, the benefits of robotic surgery – fewer complications, a faster recovery and a shorter hospital stay – demonstrate the exciting potential of technology in the operating theatre.

Are there any new or expected developments in the field of robotic surgery that might change how liver surgery is performed in the coming years?

<>All signs point to robotics becoming the standard in minimally invasive surgery, but larger studies are needed to show a clear benefit. As a high-volume centre, we will be able to contribute considerable data to these efforts.

In the future, improved visualisation of the liver using 3D imaging and/or contrast agents will allow the surgeon to robotically navigate with greater precision, improving the surgeon’s ability to obtain sufficient margins while at the same time sparing healthy tissue. 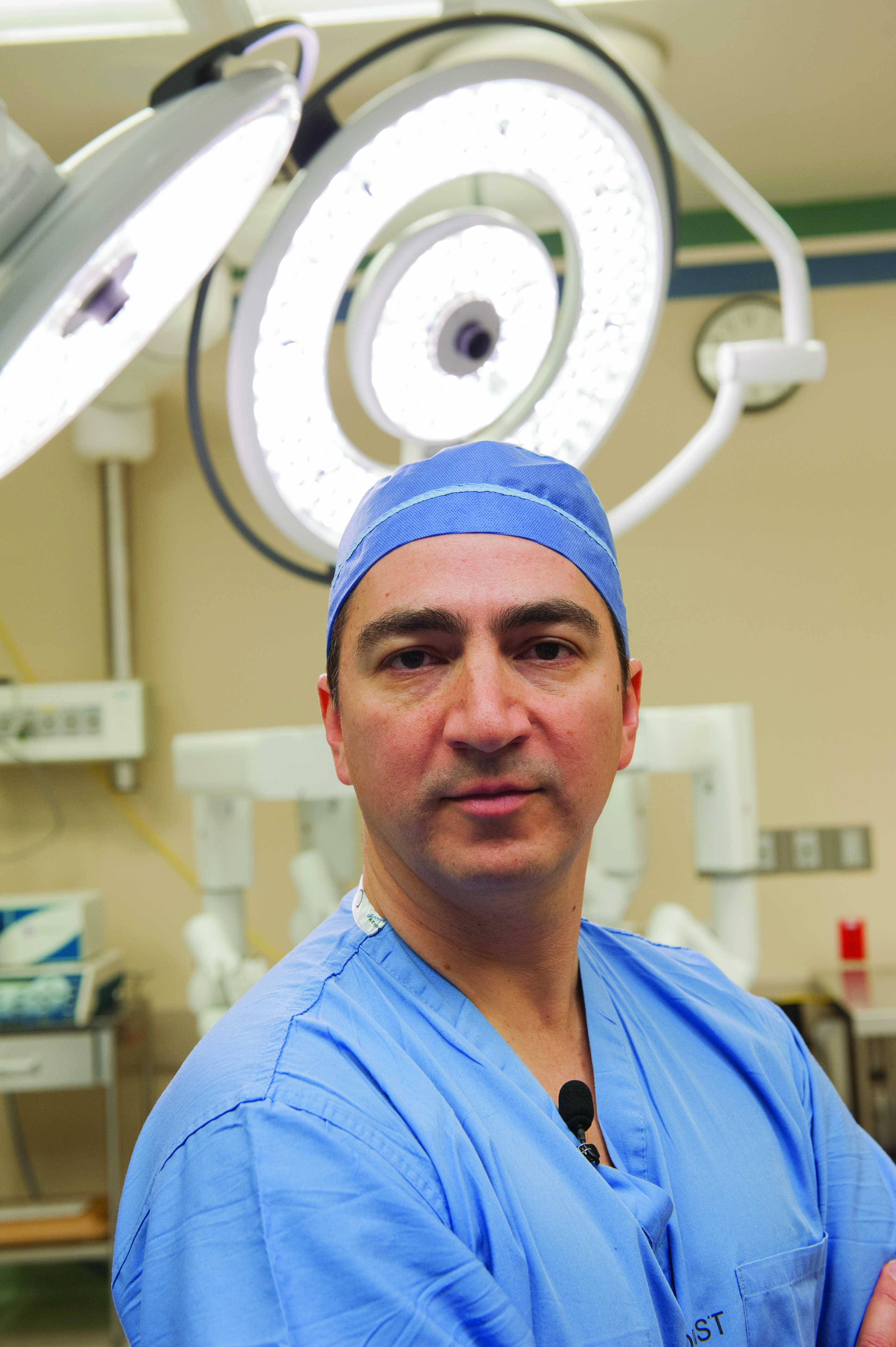 Dr Alejandro Mejia received his medical training at the Universidad Pontificia Bolivariana, Colombia. He was trained as a general surgeon at the University of Texas Health Science Center at San Antonio and then completed a fellowship in multi-organ abdominal transplantation and hepatobiliary surgery at the University of Nebraska Medical Center in Omaha. There he trained extensively in adult and paediatric transplantation, as well as techniques in split-liver and live-donor liver transplantation. He served as an assistant professor at the University of Texas at San Antonio prior to joining Methodist Dallas Medical Center. He is certified by the American Board of Surgery and is a member of the American Society of Transplant Surgeons. He led a team that performed the first fully robotic Whipple and major liver resection in North Texas. He is currently President of The Texas Transplantation Society. His main interests include adult liver transplantation, hepatobiliary, and pancreatic surgery. Methodist Dallas is one of only a handful of centres in the country recognised by Intuitive Surgical as a case observation Epicenter for minimally invasive hepatobiliary surgery.

2 thoughts on “Robotics: the future of liver surgery?”