Earth & Environment
Landslides are the most deadly secondary effect of earthquakes in mountainous regions. Dr Noélie Bontemps (Université Grenoble Alpes) has uncovered the secrets of a slow landside in Peru by monitoring post-seismic landslide dynamics in both the dry and wet seasons. GPS and seismic data confirm that in combination, earthquakes and rainfall cause greater landslide motion than either force alone. There is a strong decrease in soil rigidity following earthquakes. Rigidity recovers rapidly during the dry season and slowly in the wet season, with soil rigidity a key factor in controlling landslide movement.

Globally, landslides are the most deadly secondary effect of earthquakes in mountainous areas. Despite this, the mechanisms behind landslide triggering remain poorly understood; nowhere is this truer than in regions where landslide kinematics are intricately linked to seismic activity and rainfall. Improved understanding of landslide triggering is vital for effective hazard management and mitigation.

To tackle this gap in knowledge, a group of researchers has spent 10 years building an international collaboration focused on a remote corner of South America. Scientists from the Institut de Recherche pour le Développement (IRD) in France, and those from the Instituto Geológico Minero y Metalúrgico (INGEMMET) in Peru have worked together in the high Andes to uncover the secrets of a persistent, slow landside on the southern wall of Peru’s Colca Valley.

Landslides are widely perceived as catastrophic events; to the casual observer, landslides conjure an image of soil, rocks, and other debris hurtling downslope at speeds on the order of meters per second. However, slow landslides move at a fraction of this speed, creeping downslope at just millimetres to meters per year, with some persisting for decades or longer. Unless transitioning to rapid flow through catastrophic failure, such events tend not to pose a threat to life; however, they are major drivers of morphological change, sometimes on a landscape-scale, and can cause extensive damage to property
and infrastructure.

Shaking generated by earthquakes causes cracks within the landslide mass.

From a research perspective, such events offer scientists a window into landslide dynamics through continuous monitoring. The slow-moving Maca landslide in Peru provides a particularly useful research focus because, owing to its geographical position, its development is strongly related to both seasonal rainfall and high regional seismicity, with opportunities to investigate the individual and combined impacts of these factors. Initiated and led by Pascal Lacroix (IRD) and Eric Larose (CNRS), this collaborative experiment between a Peruvian institution, the French academy, and the approval of the local population has won financial support from the Society of Exploration Geophysicists (SEG) Geophysicists Without Borders, the European Space Agency (ESA), the Centre National D’Etudes Spatiales (CNES), and the Institut National des Sciences de l’Univers (INSU). In addition, the work of Noélie Bontemps was possible thanks to the financing of her PhD by the Labex OSUG@2020 and the Centre National D’Etudes Spatiales (CNES).

A Landscape of Fire and Water
The Colca Valley extends some 70 km through the Peruvian Andes. With depths of up to 3250 m (more than 10,700 feet), it is one of the deepest canyons in the world, eclipsing the more famous Grand Canyon, at just ~1800 m (or ~6000 feet) depth. The Valley has a rich social and cultural history, stretching back through time to the pre-Inca era, and today is one of the foremost visitor attractions in the country.

The Andes mountain chain, running 7000 km (4300 miles) down the spine of South America and reaching an elevation of more than 6000 m, is the result of plate tectonics. The subduction of the Nazca under the South American plates has resulted in uplift, crustal thickening, volcanic activity, and widespread seismic activity. The Colca Valley sits aside the currently active Sabancaya Volcano, and is impacted by seismicity related to both local volcanic activity and regional tectonics. Precipitation in the valley is highly seasonal, with rainfall almost exclusively occurring between December and May. As such, Dr Bontemps and her colleagues were able to monitor landslide dynamics at Maca following earthquakes during both the dry and wet seasons, allowing for detailed analysis of the individual and combined impacts of earthquakes and rainfall on slow-moving landslides.

Measuring the Maca Landslide
The broad (~1 km wide) Maca landslide involves the slow-to-very slow slippage of clay and silt (annual mean of 1.5 m/yr, although it may reach up to 7 m/year during particularly wet rainy years). The flow is maintained by river-erosion of the forward end, although both rainfall and moderate regional earthquakes (Mw ≤ 6) accelerate the motion temporarily. The volume of material is approximately 60 million m3. The base of slide includes 50 m of lacustrine (lake) deposits, while the upper 8–12 m is a permeable layer of material formed by a debris avalanche some 10,000 years ago. Overall, the landslide can be considered typical of events that occur under similar geological and morphological conditions and, as such, it has been comprehensively monitored over the last decade.

Dr Bontemps and her colleagues have focused on 3 years of data from seismic (i.e., waves of energy traveling in the ground) and geodetic (i.e., deformation and movement) monitoring of the Maca landslide. They have used the Global Positioning System (GPS) to measure the displacement of the landslide and a meteorological station to track rainfall. A seismometer has been used to record regional earthquakes and to measure variations in the rigidity and density of the soil using a technique called ambient noise correlation. Ambient noise correlation, sometimes called passive seismic interferometry, is a cutting edge method that was first used for landslide monitoring in 2012 following observations of changing soil rigidity 5 days before a catastrophic landslide in Switzerland; to date, nine landslides have been monitored using this approach worldwide.

Ambient noise correlation reconstructs the response of the landslide material to excitation (e.g., an earthquake) by cross-correlating the velocity of seismic noise passively measured by two sensors; in Maca, ambient noise is mostly caused by vehicles on the nearby road, by the river at the toe of the landslide, and by wind. The changing seismic velocity can correlate with the decrease of rigidity of the material within the landslide and, as such, offers the potential for real-time monitoring and the identification of surface failure prediction.

At Maca, the stations were installed in early 2016; in the same year, two earthquakes of similar magnitude (Mw 5 and 5.5) occurred at similar distances to the landslide (~10 km). One earthquake struck during the rainy season and the other during the dry season, providing a fortuitous opportunity for comparison.

In combination, earthquakes and rainfall cause greater landslide motion than either force alone.

New insights into landslide mechanisms
The study at Maca yields a wealth of new knowledge about landslide mechanisms; in particular, the GPS results confirm that in combination, earthquakes and rainfall cause greater landslide motion than either force alone. The team observed a strong decrease in the rigidity of the soil (i.e., an increase in its ability to flow) following both Mw ~5 earthquakes.

During the dry season, rigidity recovered rapidly after the earthquake; However, during the wet season, both subsequent small earthquakes (Mw <3.6) and rainfall inhibited the post-seismic recovery of soil rigidity, resulting in greater overall landslide slip. The rigidity continued to decrease following the earthquake, taking several months to recover is pre-seismic level. Dr Bontemps and her colleagues suggest that the shaking generated by earthquakes causes cracks within the landslide mass. Rainfall is able to penetrate these cracks and prevent them from healing. In a similar vein, numerous small earthquakes also work to keep cracks open. The team found that soil rigidity is a key factor in controlling the landslide movement. When the rigidity of the soil was below a certain threshold (i.e., the soil was either filled with water and/or cracked and damaged), the landslide was in motion; when the rigidity was above the threshold, the landslide slowed and sometimes stopped. These results provide new insights that will allow scientists and civil protection authorities to better monitor and manage slow-landslide behaviour around the world, particularly for landslides triggered by earthquakes and rainfall. 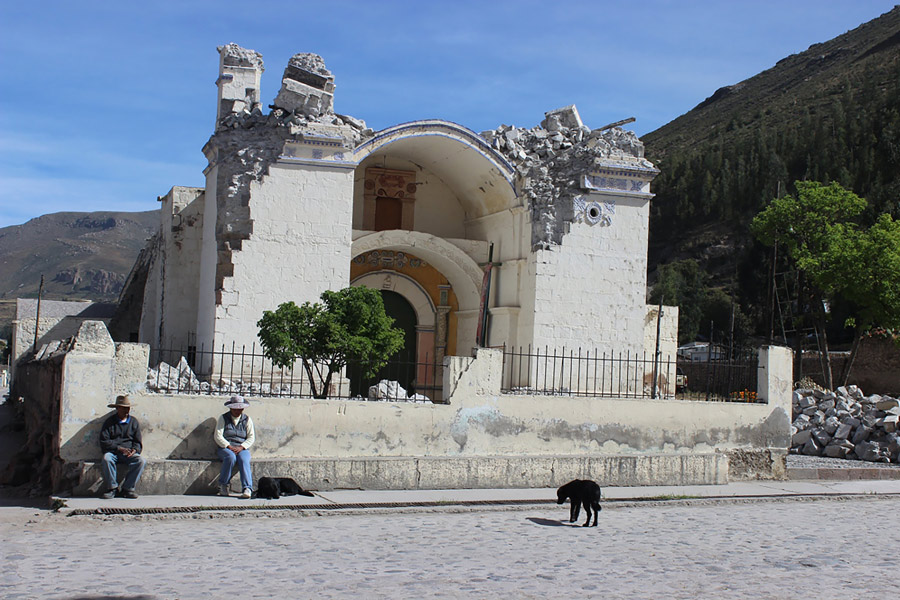 Can your findings be extended to rapid landslides or do they operate under different mechanisms?

<> This is an important question as rapid landslides are the ones mainly responsible for casualties. Nevertheless, slow-moving landslides can also suddenly turn into rapid ones. The mechanisms that we observe here thus do apply to rapid landslides. Studying slow-moving landslides such as the one we monitored in Maca is therefore important, not only for improving our understanding on landslides, but also to understand how the kinematic of a landslide changes from slow to rapid. The main issue regarding rapid landslides is their monitoring. The seismic velocity changes, for example, are hardly observable on a very small-time scale (a few minutes down to a few seconds). Despite this, the technique does still apply to rapid landslides, especially for quantifying the recovery, and ensures operators that the slope does not move anymore, after a certain period of recovery.

Can any of the changes in the Maca landslide over time be linked to volcanic activity at nearby Sabancaya Volcano? 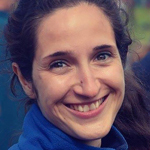 Noélie Bontemps started to study the combined effect of earthquakes and precipitation on landslides during her Masters degree and loved the subject so much that she decided to do a Ph.D. on the same subject. She obtained it in December 2019 at the University Grenoble Alpes (France).

The research of Noélie Bontemps aims to understand all the mechanisms behind landslide triggering, especially in regions where earthquake and precipitations can combine to impact a landslides’ kinematic.

This experiment was funded by an SEG Geophysicists Without Borders grant, a grant from ESA through the Alcantara project “Monitoring and Detection of Landslides from optical Images time-Series” (ESA 15/P26), a CNES/TOSCA grant, and a CNRS/INSU grant. The work of Noélie Bontemps was supported by a grant from Labex OSUG@2020 (Investissements d’avenir ANR10 LABEX56 and a CNES doctoral fellowship.

Metrology for the Factory of the Future
Informatics & Technology
Read This Article
Planetary Protection Policy: For sustainable space exploration and to safeguard our biosphere
Earth & Environment
Read This Article