Physical Sciences
The intense energy demand of the modern world is a major driver for the burning of fossil fuels. If humanity is to stand a chance of controlling climate change, we must move towards sustainable energy. Professor Bin Su and Dr Zheng Ma, of the Huazhong University of Science and Technology in China, have created technology that allows for the conversion of the mechanical energy of raindrops into electricity using flexible magnetoelectric materials. In addition, they have combined these generators with a system to collect water droplets from fog. The combination of these technologies allows for simultaneous electricity generation and water collection.

As humanity has moved towards an increasingly automated and digital world, its energy demand has soared. From lighting our houses and cities to powering our devices and ensuring our mobility, energy is a huge sector, the growth of which is not expected to slow down any time soon. Despite the important drive towards a more efficient use of energy that avoids waste, the world’s energy needs still consume large amounts of resources and have a negative impact on the planet. The global energy sector is responsible for approximately 40% of global carbon dioxide (CO2) emissions and, as such, it is a major contributor to climate change.

The sources we use to generate the large amounts of energy we need play a vital role in these harmful CO2 emissions: currently the world still relies heavily on energy generated by burning fossil fuels, a process which releases large amounts of CO2. The urgency for cleaner, greener energy sources has been evident for a while, but it is important to remember that CO2 is not the only greenhouse gas that can worsen global warming. Methane, for example, is another such greenhouse gas which is produced in large amounts – not only by the meat industry but also during the extraction, transportation, and consumption of so-called ‘natural’ gas. 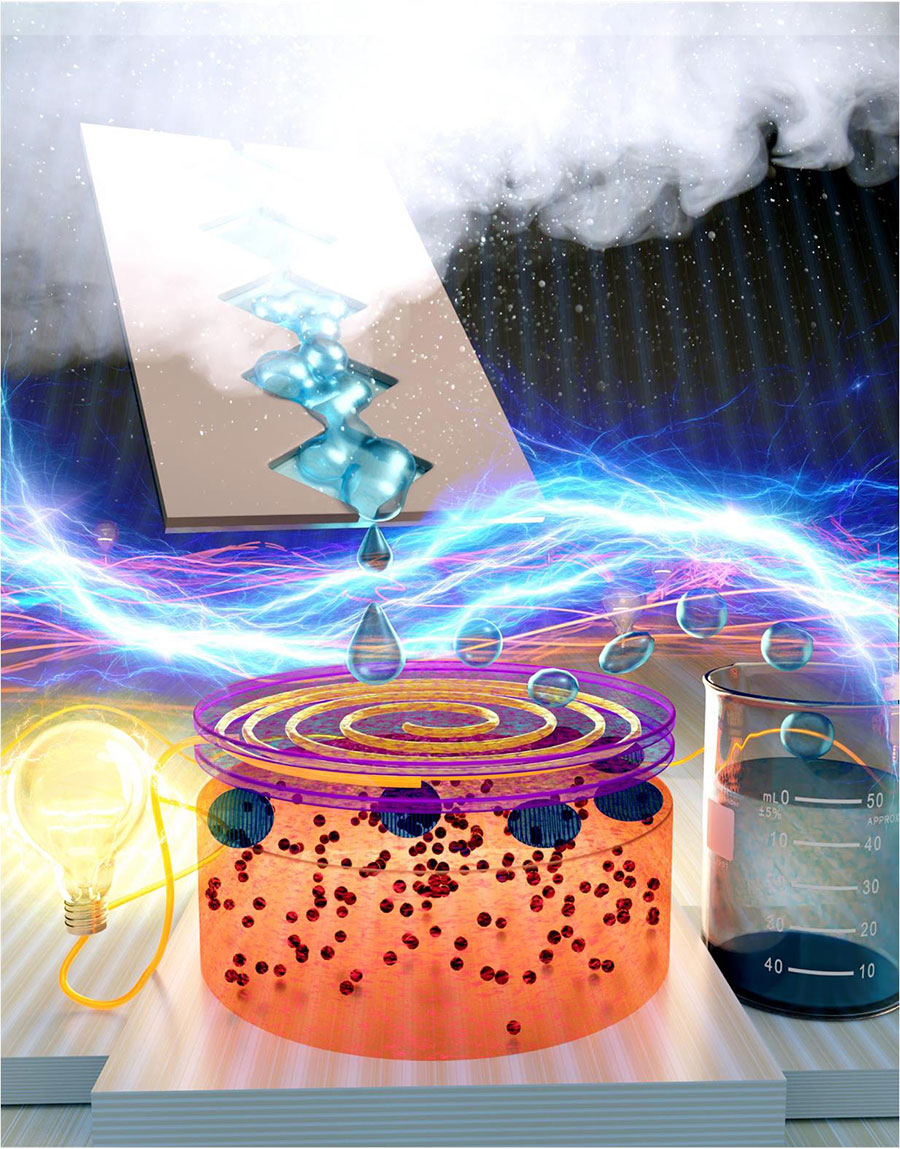 Clean energy: let it rain
Tackling climate change requires a drastic reduction in greenhouse gas emissions, which can only be achieved by a profound change in current energy production practices. One alternative to burning fossil fuels is to convert mechanical energy – the energy that is inherent to motion – into electricity, which is usually achieved using magnetoelectric generators. The functioning of these generators is based on Faraday’s law, which describes how an electromotive force (electricity, in other words) can be generated in an electric circuit by its interaction with a varying magnetic field. Therefore, if motion can be used to vary a magnetic field around an electric circuit – for example, by simply changing the relative position between an electric circuit and a magnet – electricity can be generated.

Magnetoelectric generators using this principle can be found in wind turbines, for example, as well as in dams, coasts or riverbanks, where the mechanical force of the water (e.g. sea waves) is collected. However, these generators are bulky, heavy, and fixed, and they require large bodies of water, which hinders their widespread application in energy generation scenarios where small devices are needed. In these scenarios, the mechanical energy contained in rain – gathered by the water droplets as they fall from the sky – can be used to generate energy.

The team developed a magnetoelectric hybrid system that can harvest the mechanical energy gathered by rain as it falls from the sky. The equipment consists of liquid droplets of glycerine sandwiched in between two thin plates, the top one containing a conductive coil (electric circuit) and the bottom one sitting on a base containing a magnetic powder. The two thin plates are coated with a superhydrophobic material (meaning strongly water repellent) that allows for the glycerine droplets in between them to be flexible, compressing and recovering like a malleable sponge in response to a mechanical force.

As such, when a raindrop hits the top plate, the pressure forces the plate down, compressing the glycerine droplets, but due to the superhydrophobic material of the plates the droplet can then bounce back. For each raindrop, the glycerine droplets can bounce a few times and, as a result, the distance between the top and bottom plates – i.e. between the conductive coil and the magnetic particles – varies with time. This means that the conductive coil on the top plate feels a varying magnetic field from the magnetic powder on the bottom plate, which generates electricity.

Converting the mechanical energy of falling rain into energy requires the development of small, precise devices.

Prof Su, Dr Ma and their team not only generated an isolated cycle of electrical current in response to a single water drop, they also observed that a sustained and stable electric current could be generated by the force of several consecutive drops. They were able to model the predicted output voltage based on the number of coils used, the compression time and the magnetic intensity, amongst other factors. The team also established that the performance of these devices can be tuned by tweaking factors such as the particle weight and size of the magnetic powder, the volume of the glycerine droplets, and both the size of the falling water drops and the height from which they fall.

Combined technologies
Given that the performance of these energy generation devices depends on several factors related to the raindrops that hit them, the randomness of real rain may lead to variable device performance – and, of course, if there is no rain, no energy can be generated. However, the team at the Huazhong University of Science and Technology also devised a technique to produce controlled water droplets from fog, to be used in conjunction with their magnetoelectric generator.

To collect droplets from fog, the scientists created a plate which combines superhydrophobic and hydrophilic materials to create a pattern that causes water to accumulate and coalesce into large drops. These drops then slide over a defined path along the hydrophilic material. This plate was positioned over the magnetoelectric hybrid generator at an angle, so that the water accumulated would slide onto the top plate of the device, generating electricity in the manner described above. In addition, the top plate of the magnetoelectric generator was positioned at an angle so that the droplets bounce off the top plate and slide onto a container, allowing water to be collected. By combining these technologies, the scientists were able to create a system that can both generate electricity and collect water.

Doing more with less in harsh environments
The work of Prof Su and Dr Ma provides a new technology for sustainable energy generation in regions where water is scarce, since it does not require large bodies of water to provide the mechanical energy for magnetoelectric generators. To expand this prototype for real-world applications, the scientists suggest that their concept may be adapted as needed within a given context by, for example, using small springs in place of glycerine droplet as the compressible supports. In any case, allied to the water collection technique also developed by Prof Su and Dr Ma, this new magnetoelectric system has the potential to provide sustainable resource utilisation in harsh environments.

When do you think this technology will be ready to be used on a ‘real-life’ scale?

What was the biggest challenge creating this technology? 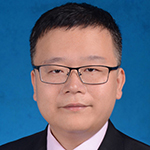 Dr Bin Su is a professor at the School of Materials Science and Engineering, Huazhong University of Science and Technology (HUST), China. He received his Ph.D. in Materials Science from Shanghai Jiao Tong University, China. He worked in the research group of Professor Lei Jiang in ICCAS, and successively served as ARC-DECRA research fellow and then senior research fellow at Monash University, Australia. His research interests include flexible electromagnetic materials and devices. 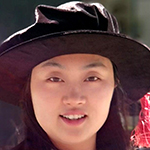 Dr Zheng Ma is a postdoctoral research fellow at the School of Materials Science and Engineering, Huazhong University of Science and Technology. She received her Ph.D. from the school of Chemistry, Monash University, Australia in 2018, under the supervision of Professor Douglas R. MacFarlane. Her research interests include soft conductors/sensors, wearable electronics and energy storage devices.

This work was supported by the International Postdoctoral Exchange Fellowship Program (Talent-Introduction Program), China Postdoctoral Science Foundation Grant (2019M652619), the National 1000 Young Talents Program of China, with initial financial support from HUST, and the Hubei Provincial Nature Science Foundation of China (grant no. 2017CFB396). This project was supported by the State Key Laboratory of Materials Processing and Die & Mould Technology, Huazhong University of Science and Technology. 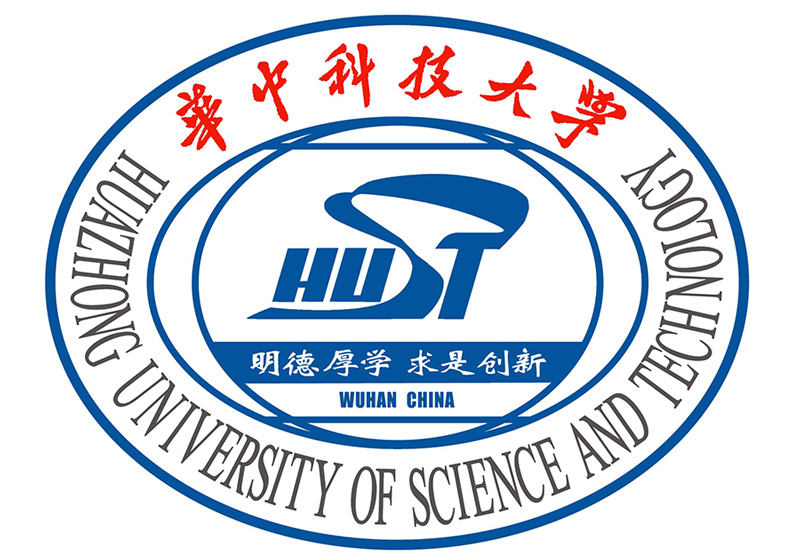