The Earth’s surface is divided into rigid plates that move with respect to each other in response to heat loss from the interior. At the China University of Geosciences, Wuhan, Professor Timothy Kusky is studying the evolution of tectonic plates through Earth history. Along with his colleagues, he has found that a devastating 2020 earthquake in the Aegean Sea resulted from a process known as slab rollback. This process may also have been responsible for the eruption of Santorini 3,650 years ago, which altered global climate, devastated the eastern Mediterranean, and wiped out the Minoan civilization.

The Earth is a dynamic system. The cold rigid surface (or crust) on which we live is broken into many rigid plates that all move relative to one another in a process known as plate tectonics. The theory of plate tectonics marks a true paradigm shift in human knowledge. Incredibly, given its almost universal acceptance, the theory was only developed in 1915 (by German meteorologist and geophysicist, Alfred Wegner) and was only widely adopted as fact in the late 1960s and early 1970s. Today, we know that the surface of the Earth is divided into 12 large and several dozen small rigid plates that are all moving with respect to each other in response to heat loss from Earth’s interior. Most of this motion is accommodated along the boundaries of different plates; in contrast, the interiors of plates do not deform significantly, and typically do not have extensive magmatism or seismic (ie, earthquake) activity except in areas affected by mantle plumes (upwellings of hot mantle material such as that below the Hawaiian islands).

At the China University of Geosciences, Wuhan, Professor Timothy Kusky, along with his colleagues and collaborators (including PhD students Jiannan Meng, Zhipeng Zhou, and Ozan Sinoplu, Professor Erdin Bozkurt, and Professor Lu Wang), are studying the evolution of tectonic plates through Earth’s history. With funding from the National Science Foundation of China, they have turned their attention to the processes responsible for a devastating magnitude (M) 7.0 earthquake that hit the eastern Aegean/western Anatolian region on 30 October 2020. The earthquake caused extensive damage and loss of life. Professor Kusky and his team have found that processes controlling the earthquake are the same as those responsible for some of the greatest natural disasters in history, such as the eruption of Thera (Santorini) 3,650 years ago. Their work has significant implications for hazard management at divergent plate boundaries.

The theory of plate tectonics marks a true paradigm shift in human knowledge.

Plate tectonics: The basics
Plate boundaries can be divergent, convergent, or lateral (known as ‘transform’). Along transform boundaries, tectonic plates slide laterally past each other, neither creating nor destroying the lithosphere (or ‘crust’). Divergent plate margins form either where continents are being torn apart by tectonic forces, forming continental rift valleys such as the East African Rift, or form in oceans where two oceanic plates are moving apart. At oceanic divergent plates, new oceanic lithosphere is created at oceanic spreading centres; as the plates pull apart, new material rises up between them. Oceanic crust is formed of mafic rocks (eg, low silica rocks such as basalt), which are dense and heavy; continental rocks include a much broader spectrum of materials that are overall much less dense. As such, oceanic lithosphere sinks into the underlying mantle relative to the more buoyant continental crust, forming depressions (or basins) in which water pools to form oceans. As a result, most oceanic divergent margins are hidden deep within the oceans (eg, the Mid Atlantic ridge), and only make an appearance on land when specific geological conditions arise, such as where they intersect with mantle plumes (eg, Iceland).

The material formed along divergent boundaries is eventually recycled back into the mantle at convergent boundaries. When dense oceanic crust meets more buoyant crust of a continent, it sinks below it along what we call subduction zones. As the oceanic plate slips below the continental plate, it dehydrates, and water stored in marine sediments percolates up into the overlying continental crust. This water lowers the melting temperature of the rock, allowing pockets of molten rock (or magma) to form. This magma pushes to the surface to form volcanoes. Magmatic arcs form approximately 100 km above the subducting slab of oceanic lithosphere (eg, the Aleutian Islands, Caribbean arc) and produce the most violent volcanic eruptions on Earth. Moreover, the friction generated as the two plates slide past each other is responsible for the largest and most devastating earthquakes on Earth, including that which caused the 2011 Tōhoku tsunami. The largest recorded earthquake in history (a M 9.5 event in Chile in 1960) released energy equivalent to more than a million Hiroshima nuclear bombs.

Plate tectonics and subduction have been ongoing through at least 4 billion years of Earth history and are responsible for the formation of continents, their endowment with mineral resources, and the associated hazards in places where the process is active.

Slab rollback and Anatolian seismicity
The M 7 Samos earthquake struck the Aegean Sea on 30 October 2020. The epicentre was near the Turkey-Greece border, and the initial rupture occurred at a depth of 11–21 km. The earthquake saw the fault slip by up to 4 m over a large area. It was the deadliest earthquake of 2020, with 118 deaths attributable to the event. Ground shaking and liquefaction (when solid ground takes on liquid properties) resulted in the collapse of buildings, landslides, and a tsunami.

The earthquake of 30 October 2020 resulted from a process known as slab rollback.

This region is part of the Hellenic arc, which extends from western Turkey to Greece and sits above the subduction of the African plate beneath Europe and Asia. The area is tectonically complex. Owing to the collision of Arabia and Eurasia in the east, some parts of the region are escaping sideways to the west; this process is known as ‘tectonic escape’. However, based on field evidence, Professor Kusky and his team have found that the earthquake of 30 October 2020 resulted from a process known as slab rollback. Along a subduction zone, slab rollback occurs when the down-going plate sinks, or rolls-back, becoming steeper under the influence of gravity, causing the trench to retreat. As the down-going and upper plates are mechanically coupled, this causes the upper plate to be pulled or torn apart, forming extensional fault systems and in the case of Turkey and Greece, giant systems of extensional grabens that in many ways resemble the rift valleys of Eastern Africa. In western Anatolia, the subduction trench is rolling back towards Africa; as the African plate retreats, it is ripping apart Turkey and the Aegean region. The results have been catastrophic for civilization.

North–south extension caused by this process has been going on for about 15 million years, and over that period the subduction zone has migrated southwards by at least several hundred kilometres.

Santorini and the fall of the Minoan civilisation
Slab rollback is not only the root cause of the 2020 earthquake but is also responsible for the extension that has formed the Aegean Sea. It is also possible that it was responsible for one of the greatest natural disasters in history. The eruption of Thera (now called Santorini) 3,650 years ago devastated the eastern Mediterranean, wiping out the Minoan civilization. Santorini is an island of the Hellenic volcanic arc, and it is thought by some that this massive eruption, the most recent in a long line of huge eruptions and the one which formed the current caldera (or large crater) that forms the morphology of the present-day island, was responsible for the Biblical plagues, the ‘days of darkness’, and the ‘parting of the sea’ (a possible reference to a tsunami). Sadly, there are no first-hand accounts of the eruption, despite it occurring in a densely populated region, likely because only a primitive form of writing was in use by the Minoan people at this time (the Greek language had yet to be put into written form). However, ash from the eruption has been found across the region and in North Africa and the Middle East. At one point during the eruption, a caldera collapse caused seawater to flow into the crater. The resulting huge steam eruption generated a tsunami that devastated communities around the Mediterranean and caused water in the Nile to flow upstream for hundreds of miles. Evidence from ice cores in Greenland and tree rings in California suggest that the eruption changed global climate, lowering temperatures particularly in the Northern Hemisphere. In China, cold summers led to crop failure and famine, while acid fogs (most likely formed of sulphuric acid) blighted the landscape. The unfortunate Minoans, fleeing the devastation of their homes, became known as the Philistines.

As demonstrated by the 2020 earthquake, this region remains prone to devastating geological phenomena. However, the boundaries between the various tectonic regimes (and activity types) in the region remain poorly defined, and Professor Kusky and his team are emphasising the need for further studies of fault system geometries, paleoseismic activity, and current seismicity to improve our understanding of the relationships between tectonic processes and crustal deformation. Such work is critical to modelling earthquake/eruption frequency and locations, which is necessary for developing hazard management plans and building codes that can protect society from the fate of the Minoans.

Does slab rollback occur along all subduction zones? If not, what is the reason for it to develop in some places but not others?

<>
Slab rollback occurs along some subduction zones but not all of them. It is generally caused by old cold and dense oceanic slabs being pulled by gravity into a steeper orientation, which in turn causes the trench to ‘rollback’.

What is the occurrence interval of large earthquakes in the study region?

<>
There are many sub-regions and different fault systems in the area, which is one of the most seismically active on Earth. Based on statistical analyses of historical earthquake data, it is estimated that some of these regions have between a 65% and >80% chance of having an earthquake of magnitude greater than 7 in the next 100 years. The chances of many smaller earthquakes is much higher. 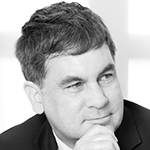 Professor Kusky is Director of the Center for Global Tectonics, China University of Geosciences. He received his BSc and MSc in tectonics from the University at Albany, and MA and PhD from Johns Hopkins University. He is a Fellow of the Geological Society of America, and a Chinese Friendship Medal Laureate.