In a world where news, data and images are increasingly shared freely online, whether correctly or not, Creative Commons (CC) has stepped up to make allowing others to reuse and remix your research easy. By creating, maintaining and promoting all of the available CC licences, the organisation hopes to help an international community of scientists, educators and activists realise the benefits of the commons. In this interview with Graham Steel (Publishing Consultant and Interim Representative for the United Kingdom to the CC Global Network Council), we found out the real advantages of publishing under a CC licence.

Creative Commons (CC) licences are free, international, easy-to-use copyright licences that can be utilised by any authors or publishers. They specifically allow research and data to be reused and remixed collaboratively. The CC organisation, which created these licences in 2001, builds tools that make their licensing system discoverable and usable across the globe and across disciplines.

With goals such as opening up education for all, accelerating innovation in science and medicine through collaboration and inspiring works of art and culture, the CC has its eyes set firmly on how CC licensing can shape a better future. Interim Representative for the United Kingdom to the CC Global Network Council, Graham Steel, told Research Outreach more about how the organisation came to be, how the licensing works and why it is so important.

What is Creative Commons (CC), and what is Science Commons?
CC is a global non-profit organisation that was set up in 2001 by Lawrence Lessig, Hal Abelson and Eric Eldred (with the support of the Center for the Public Domain), that enables sharing and reuse of creativity and knowledge through the provision of free legal tools. The code layer of each licence was designed by the late Aaron Schwartz. CC’s legal tools help those who want to encourage reuse of their works by offering them for use under generous, standardised terms; those who want to make creative uses of works; and those who want to benefit from this symbiosis. CC’s vision is to help others realise the full potential of the internet. CC has affiliates all over the world who help ensure CC’s licences work internationally.

Science Commons was an initiative launched by CC in early 2005 which ran until 2009. Its primary focus was on building infrastructure for open science. More broadly, CC has undertaken projects to build commons-based infrastructure for science through identifying and lowering unnecessary barriers to research, crafting policy guidelines and legal agreements and developing technology to make research, data and materials easier to find, share and use.

The number and choice of licences as they stand work extremely well and offer an option to suit everyone’s needs.

What does your role at CC involve?
After discovering Open Access (OA) academic papers in 2006, I became aware of CC-licensed works. I made direct contact with co-founder Lawrence Lessig and then released most of my musical works under CC licences, sent out at least 1500 t-shirts that related to CC works and spread the word about CC to family, friends, work colleagues and the general public. In 2016, CC migrated their real-time communications to Slack which I joined and contribute to daily. Over the last few years, CC has been rebooting its global network structure, which resulted in the relaunch of the CC United Kingdom chapter. I was elected to serve as Interim Representative for the United Kingdom to the CC Global Network Council (GNC).

Why are licences important for scientific content?
Copyright, as we know it today, came along in 1710, so by default, publishers (not authors) owned the copyright to academic papers. This remained the norm until around 1991 with the formation of arXiv, an e-print service in the fields of physics, mathematics, computer science etc. OA publishing/publishers started to emerge around the same as major players such as BioMed Central and The Public Library of Science in 1998 and 2000 respectively. Once CC had been established and launched a suite of CC licences, OA publishers started to publish research papers under CC. As of December 2017, the Directory of Open Access Journals listed 10,567 OA journals. In total 94.8% of these now have CC licences. The most used licence is the CC-BY licence (43.8%). This licence lets others distribute, remix, tweak and build upon your work, even commercially, as long as they credit you for the original creation. This is the most accommodating of licences.

Are there too many licences? Should CC BY be the default for text?
The CC licences have become widely adopted both within and beyond academia with over 48 million media files in the Wikimedia Commons alone. They provide a range of options that give authors control over how their work can be reproduced and remixed.

The number and choice of licences as they stand work extremely well and offer an option to suit everyone’s needs. It is certainly refreshing to see alternatives to the norm in subscription-based publishing/publishers.

Should CC BY be the default for text?
With reference to the text of academic materials, yes I think it should be.

CC has been and remains a pivotal element of OA. It has provided visionary thinking and evangelising about the benefits and possibilities of OA via conferences, networking with the main stakeholders within the OA movement, and calling upon the CC board of directors to give talks about CC and OA. CC hosted convenings, such as the 2006 Information Commons for Science Congress at the National Academies of Science in Washington, D.C., where renowned scientists and scholars from the United States and other countries gathered to discuss data-sharing strategies. In 2007, CC co-sponsored with the Committee on Data for Science and Technology (CODATA) the Workshop on Common Use Licensing of Scientific Data Products in Paris. This conference included representatives from the Global Biodiversity Information Facility, and leading legal scholars, scientists and CC International affiliates actively working on data sharing policies. It was through this collaborative process that the Science Commons Data Protocol emerged as the best – and possibly only – solution to the challenges collectively identified at that time.

CC has moved beyond simple licensing, towards making the commons more vibrant and usable, and enabling more collaboration and gratitude

In the scientific and academic communities, the benefits that digital technologies offer in terms of facilitating the greater and more efficient dissemination of research and knowledge have not yet been fully harnessed – what are your thoughts on this?
There has been substantial movement over the years in this regard, but I agree there is certainly still much more that can and should be achieved. On the positive side, as of 2017, there are almost 1.5 billion CC-licensed works. There also has been a substantial growth in the field of pre-prints and in a 2018 paper, Piwowar et al found that in 2015, 45% of the scholarly literature is OA. On the not so positive front, in 2011, George Monbiot released a sobering piece for The Guardian titled ‘Academic publishers make Murdoch look like a socialist’. Concerns have been also raised very recently with regards to Elsevier’s role in the European Union open science project.

CC has been established for more than 16 years now. What does the next five years hold? What are the strategic goals of the organisation?
CC has moved beyond simple licensing, towards making the commons more vibrant and usable, and enabling more collaboration and gratitude to help it flourish. They are focused on a variety of initiatives and products to make this happen. An example of this is CC Search, currently in prototype, which is being built as a ‘front door’ to the commons. CC Search not only surfaces CC-licensed content that is freely available to anyone, it also provides tools to make lists and attribute work with one click, and serves up a massive collection of images by utilising open media application program interfaces.

Another example is the Creative Commons Certificate, an in-depth educational course about the ethos of openness, as well as CC licences and how they work. The course is available to everyone and is geared towards empowering individuals and institutions to better advocate for openness and to help them be fully up to speed on how to interact with CC licences and CC-licensed works. 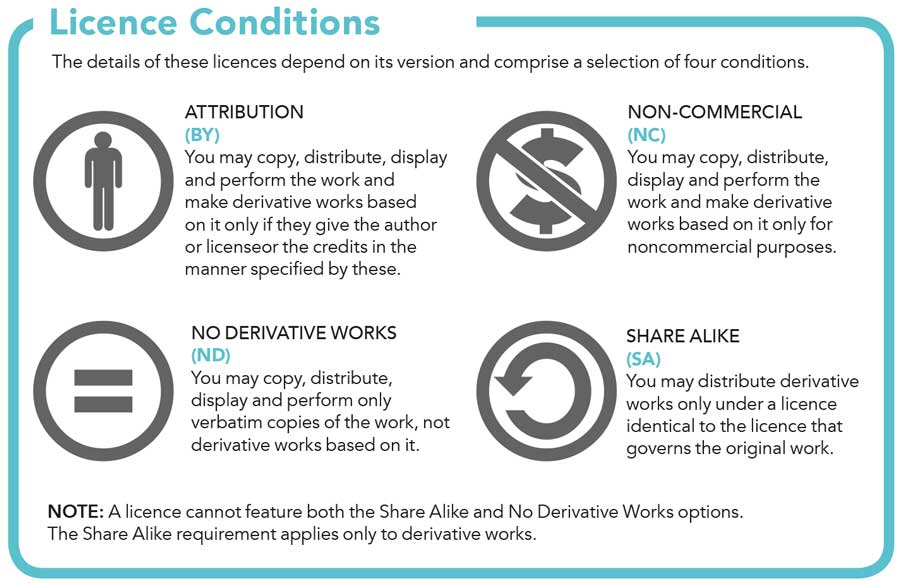 There’s also the Creative Commons Summit, an annual event. The summit is an opportunity for everyone interested in this work to get together in person with an international community of technologists, culture creators, academics and activists to share ideas and decide on the best ways to move the movement forward.

Finally, there’s the Creative Commons Global Network. This is a membership programme for organising, expanding and empowering the global community of people who are actively invested in making the world more open, and making culture more accessible and available to all.

Can you provide some links to resources where researchers can learn more about CC licences?
If you are in the United Kingdom and interested in CC, please feel free to join the United Kingdom CC Slack channel (https://slack-signup.creativecommons.org/ and jump to CC UK).
You can also find more information via the following links:

License to share: How the Creative Commons licensing system encourages the remixing and reuse of published materials was last modified: November 24th, 2022

2 thoughts on “License to share: How the Creative Commons licensing system encourages the remixing and reuse of published materials”