Physical Sciences
After studying the Sun’s activity for many centuries, astronomers are well aware that its magnetic field changes over faithfully repeating cycles. So far, however, they haven’t figured out why. Dr Yusuke Iida at Niigata University, Japan believes that new strides towards a solution to the mystery could be made by moving away from purely theoretical models. Through a combination of the latest satellite observations with advanced computer algorithms, he believes that a solution to the long-standing solar dynamo problem may not be far away.

Our Sun’s surface is a complex, ever-changing environment. One of the most fascinating phenomena which can be observed optically on our host star are sunspots: dark patches which are caused by the Sun’s magnetic field as it continually twists and spirals into intricate patterns. Astronomers now understand that sunspots are formed as these wound-up magnetic fields prevent material on the solar surface from moving around, causing it to cool down significantly. Yet however chaotic these dynamics might appear to the untrained eye, one faithfully repeating pattern presents. Every 11 years without fail, sunspots will come and go with high predictability, indicating that mysteriously repeating dynamics are playing out in the Sun’s magnetic field.

This apparently ordered process throws up a new problem for astronomers: how could an environment as violent and unpredictable as the Sun’s surface accommodate such a reliable pattern? “The activity of the solar atmosphere displays cyclic behaviour, with a period of 11 years,” Dr Iida summarises. “Since this solar activity is caused by the surface magnetic field, it isn’t yet clear how such a cyclic magnetic field is generated. This puzzle is called the ‘Solar Dynamo Problem’.” In his research, Dr Iida draws upon previous attempts to solve this problem; suggesting new approaches which make use of the latest satellite observations and computer analysis techniques.

A model with all the answers?
Tackling the solar dynamo problem has been a top priority for many solar astronomers in previous decades, with many efforts culminating in a set of equations named the ‘flux transport dynamo model’. The theory is based around predictions of the motions of plasmas – fluids of hot charged particles which are excellent conductors of electricity. Through a process known as convection, plasma continually moves across the Sun’s surface and within its interior; a motion which generates strong magnetic fields. In physics, the term ‘flux’ denotes the rate at which magnetic fields pass through surfaces – a key indicator of how plasma is moving around.

By combining the measurements made by Hinode and the Solar Dynamics Observatory, Dr Iida and his colleagues could acquire the level of precision they needed in their images for the first time.
beyond our planet.

As Dr Iida explains, the model attempts to describe how the characteristic paths taken by the Sun’s plasma are responsible for its periodic magnetic field. “The flux transport dynamo model has been constructed from the viewpoint of both theory and numerical simulation,” he says. “In the model, magnetic flux is transported both on the solar surface and within the inner convection zone for 11 years, by both gas convection and meridional flow – stable north-south flow from the equator to the poles.” So far, the flux transport dynamo model has largely held up to astronomers’ measurements of the Sun’s magnetic field and the motions of its plasma. Until recently, however, real-time observations of magnetic fields on the Sun’s surface have been severely limited in their scope; only achieving relatively low-resolution images of its surface, and taking measurements for limited periods of time.

Breaking down the flux transport dynamo model
Dr Iida argues that because of these limitations, the flux transport dynamo model cannot be tested rigorously enough to confirm its accuracy through direct measurements of the Sun’s properties. One of its most significant shortcomings, he claims, is that it doesn’t account for the finer details of the Sun’s surface – many of them smaller than single countries on earth. “The observational demonstration of flows is difficult because the magnetic field exists as very tiny and numerous patchy structures on the solar surface,” he reasons.

Since these patches are so small, far more sophisticated observations than have been made in previous missions would be required to determine their influence on the Sun’s overall magnetic field. A breakthrough came in 2006, when Japan’s space agency, JAXA, launched the Hinode satellite – Japanese for Sunrise – into orbit. From its finely tuned path around Earth (‘sun-synchronous orbit’), Hinode can observe the Sun’s surface continuously. Just a few years later in 2010, NASA followed up on this mission with the Solar Dynamics Observatory, which would study the solar atmosphere on far smaller scales than previous missions.

Enlisting the latest satellites
By combining the measurements made by Hinode and the Solar Dynamics Observatory, Dr Iida and his colleagues could acquire the level of precision they needed in their images for the first time. All the same, their task was far from over; since the magnetic field patches on the solar surface are so small, the images obtained by the two satellites would contain many thousands of them. Keeping track of them all would require far more sophisticated analysis techniques than those used in previous studies.

To obtain this quality of analysis, the astronomers built an image recognition algorithm to identify the position of each patch, and the boundaries between them, within the images they obtained – enabling them to study their dynamics in unprecedented levels of detail. “We tackle the problem using satellite observations, which provide stable and continuous data,” Dr Iida summarises. “In addition, feature recognition by computers enables us to investigate the motion of a huge number of magnetic elements.”

Tackling the solar dynamo problem has been a top priority for many solar astronomers in previous decades.

These combined techniques enables the researchers to obtain many times more information than previous studies have had access to. “Together, the accumulated magnetogram obtained by Hinode, and the Solar Dynamic Observatory, provide a huge amount of observational data, and allow us to investigate the motion of individual magnetic elements,” continues Dr Iida.

Explaining patch formation and disappearance
In a 2012 study, the researchers demonstrated the capabilities of their techniques for the first time by exploring the processes underlying the formation and disappearance of magnetic field patches. Previous theories had suggested that patches could be formed both through the splitting of existing patches and the emergence of new patches; while their numbers could decrease both through mergers of two existing patches, and the cancellation of single patches.

Through their analysis, Dr Iida’s team found that splitting and merging occurred far more frequently than the emergence and cancellation of patches. This allowed them to construct new mathematical laws to explain how patches form and disappear. Having demonstrated the ability to carry out such advanced observation and computer analysis techniques, Dr Iida’s team were now suitably equipped to explore the solar dynamo problem from entirely new perspectives. 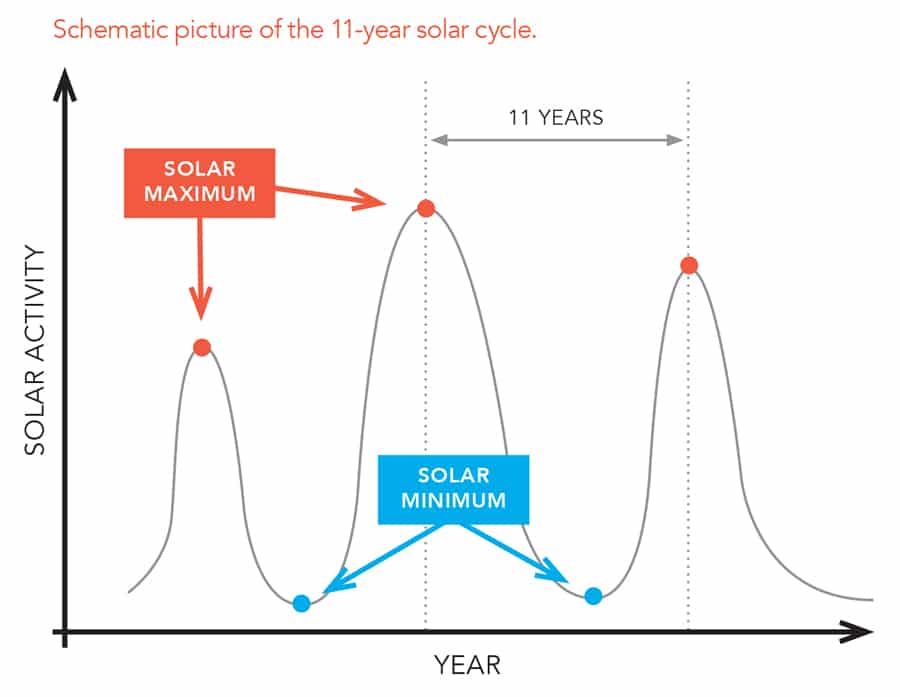 Tracking magnetic field motions
In a further 2016 experiment, the astronomers investigated the transport of magnetic flux across the solar surface due to the convection of plasma. In turn, Dr Iida’s team hoped that this analysis would unravel some of the mysteries regarding how the cyclic variation in the Sun’s magnetic field is maintained. To do this, they used their feature recognition algorithms to study images collected over a five-day period – the longest magnetic field observation which had ever been performed on the Sun – to find how flux motions depended on time. This would reveal whether variations in flux motion were a missing piece of the puzzle for the solar dynamo problem.

Dr Iida’s team discovered that this time dependence is significantly different to that of plasma convection alone, which implied that flux was strongly influenced by the dynamics of smaller-scale magnetic field patches. These results, therefore, revealed that small-scale dynamics are crucial to studying the cyclical behaviour of the Sun’s magnetic field as a whole. Since the flux transport dynamo model assumes that the plasma convection and flux transport have the same dependence, this result reveals a significant source of error in its mathematics.

Solving the solar dynamo problem
So far, the results gathered by Dr Iida and his colleagues have shown that the flux transport dynamo model is still consistent with many of the observations made by the latest satellites, even when their images are analysed by advanced image recognition algorithms. However, they have also revealed the shortcomings of the model when it comes to the more intricate dynamics of the Sun’s magnetic field, which play out on far smaller scales than those studied previously. Ultimately, the work of Dr Iida brings solar astronomers a step closer towards a solution to the solar dynamo problem, providing critical new insights into the mysterious inner workings of our host star. 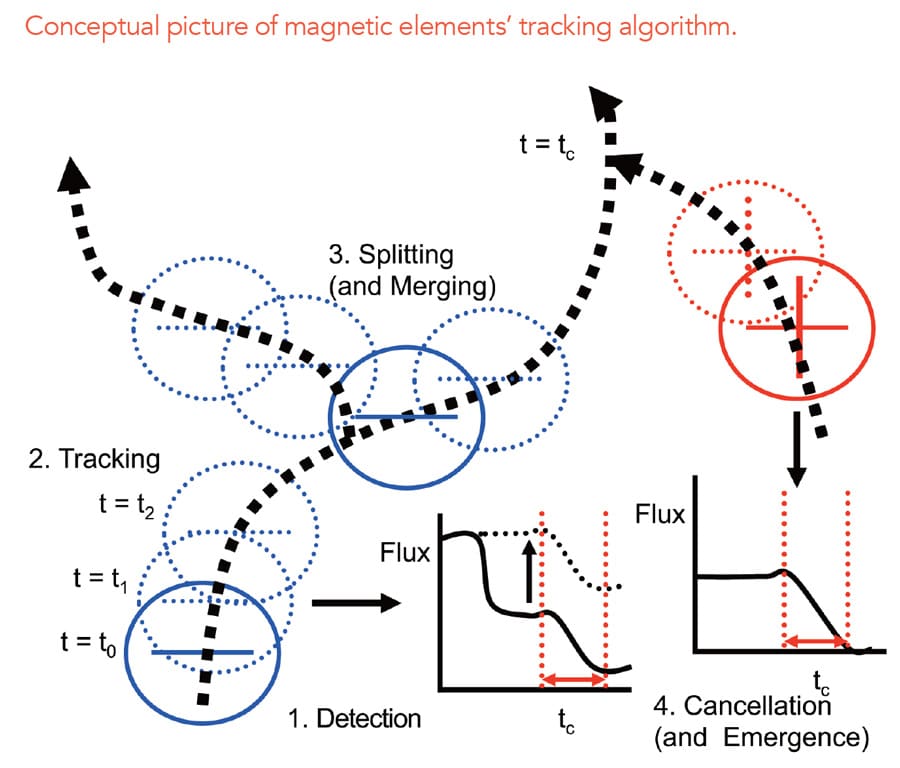 <> I have two topics. One is the analysis of more big data to investigate the dependence of the transport on the Sun’s activity cycle and region. The present solar dynamo model is averaged in time and space and I believe that further exploration can improve the model, giving a new key for the solar dynamo problem. The other topic is to tackle the question: “How the magnetic field produces the activity in the solar atmosphere.“ NASA and JAXA satellites provide a huge amount of observational data of the solar atmosphere and the analysis of this data should advance our understanding of solar activity. 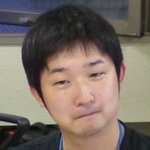 Dr Iida is Associate Professor, Graduate School of Science and Technology, Niigata University. Previously, he was Research Associate at the Physics Department of Kwansei Gakuin University since 2016. He received his Ph.D. at the Science at Earth and Planetary Science Department, University of Tokyo in 2012. He was a JSPS research fellow at the University of Tokyo in 2012-2013 and a project research fellow of the Hinode satellite at Japan Aerospace Exploration Agency (JAXA) in 2013-2016. Japan Society for the Promotion of Science (JSPS); The Japan Science Society (JSS).