Polymers are an indispensable part of modern society, found in almost every product we use, including machine and engine components. But polymers degrade, and they need close monitoring to make sure this doesn’t cause structural materials or devices to fail. We already have many ways to assess polymer degradation in the lab, but monitoring polymers while they’re in use is much harder. In a new experiment, Professor Wolfgang Binder and MSc Alexander Funtan from Martin Luther University Halle-Wittenberg, along with ALTANA AG and its division ELANTAS who initiated the research, have established the potential for a real-time sensor system to detect thermal degradation of a class of polymers called poly(ester imide)s (PEIs). Their new approach will be important for all commercial electric engines, where these materials are used for insulation.

Polymers – materials consisting of chains of large molecules – are used in almost every area of modern living. They are in our shopping bags, drinks and food packaging, perhaps in the clothes you’re wearing right now, and in parts of your phone, your computer, and your car. The many useful properties of various polymers include being very strong and lightweight while being comparatively stiff, their resistance to corrosion, lack of heat and electrical conductivity, and low cost. The easily adaptable properties of polymers such as tuning their reactivity, biocompatibility, flexibility, and resistance, makes them suitable for a large number of applications around us. One such application is in the motors of electric cars.

Polymers and electric vehicles
Sustainability is now a common goal, included in our response to the negative impacts of fossil fuels. As part of this response, the use of electric vehicles is increasing, and these vehicles are confronting us with new challenges. While combustion engines have appropriate sensors to indicate they need an oil top-up or change, such sensors are still not available for electric cars, even though their components are also subject to wear during operation.

Parts of electric motors are coated with special polymeric resins, which experience thermal degradation as the motor operates. As such coatings are required for insulation and mechanical immobilisation, their failure could have serious consequences. The development of an appropriate sensor, that could indicate when the polymer has degraded to the point where it needs replacing, would avoid unnecessary engine replacements and thus offer a valuable contribution to sustainability.

Professor Wolfgang Binder and MSc Alexander Funtan, from Martin Luther University Halle-Wittenberg, Germany, in collaboration with ALTANA AG, a global leader in specialty chemicals, and its division ELANTAS, a leading manufacturer of insulating and protective materials with a focus on the global electrical and electronics industry, have designed a chemosensor for poly(ester imide)s (PEIs). PEIs belong to a class of high-performance engineering thermosets which are used in a multitude of appliances such electrical tools, washing machines, explosion-proof motors, and drilling machines. They are a popular choice for use in electrical vehicles, so being able to monitor thermal degradation of PEIs is significant.

Challenges of polymer degradation monitoring
Polymers can be natural or synthetic, but all tend to degrade from temperature, mechanical force, or light, which naturally is a problem for the durability of our modern products. Because of this, polymers need constant monitoring to ensure the sustainability of our structural materials and devices. Depending upon the type of polymers, there are a variety of classical methods of ex-situ (off site) monitoring available, based on changes in molecular weights, mechanical properties, or changes in their insulating behaviour, for example. However, examining the degradation of the system in situ, ie. while in operation, is much harder as many common analytical methods are just not practical for inline measurements. It’s a goal worth pursuing, however, as it has several benefits over ex-situ monitoring; it can detect problems early, thus improving reliability and performance, and reduce the risk of machine failure.

Recently, sensor-based technology has been a focus of attention over conventional technologies, as they are much easier to use in real-time investigations. Continuous detection of polymer degradation requires a trigger associated with the degradation process, so sensor technology is being developed based on the detection of chemical, thermal, mechanical, mass-sensitive or electrostatic changes in the polymers.

Sensing thermal polymer degradation
Chemosensors in particular offer a promising approach to the detection of degradation products – molecules continuously released during polymer decomposition. This approach requires the use of other molecules that interact with the degradation product to produce a detectable change; in this case using an optical chemosensor whose activation is accompanied by a change of spectroscopic properties which can easily be observed using fluorescence spectroscopy.

Binder and Funtan designed synthetic stilbene molecules to continuously track the thermal degradation of a poly(esterimide)-polystyrene (PEI) resin by studying changes in fluorescence. PEIs are known to have high heat and mechanical resistance, but they experience thermal degradation over a period of several years. The researchers chose to use the optical chemosensor, a trifluoroacetyl-functionalised stilbene dye (Stil-3, Stil-4) which, when embedded into the PEI matrix, reacts with the target molecule neopentyl glycol (NPG) released during thermal ageing. This reaction is easily seen by a shift in wavelength, detected with fluorescence spectroscopy. By monitoring the responses of both a virgin (unactivated) and activated sensor molecules, the researchers were able to calculate the thermal degradation of the PEI. 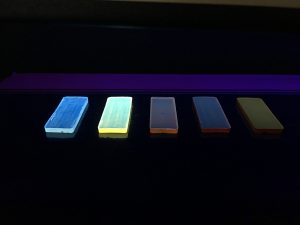 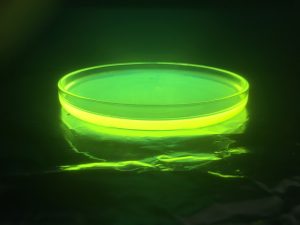 Testing in solution and solid state
In the process of designing their sensor, Binder and Funtan first had to identify a suitable analyte released during the thermal decomposition of the PEI. They conducted thermal degradation experiments at 200 and 220°C which are representative temperatures for in-situ degradation. By capturing the degradation products at different stages of testing, ranging from 500 to 5000 hours, and investigation by nuclear magnetic resonance spectroscopy, they detected the alcohol NPG as a possible target molecule. To prove the suitability of the two stilbene molecules, Stil-3 and Stil-4, they first conducted solution experiments, using different analytes at different concentrations, in particular amines and alcohols which are known to be given off during PEI thermal degradation; it is these degradation products that bind to the sensor molecules and produce an observable change in their fluorescence spectra. Both Stil-3 and Stil-4 were seen to be activated by n-butylamine and by alcohols, responding with a shift of the emission maximum in just seconds. The researchers subsequently focused on NPG as the main analyte for thermal degradation, which produced a strong reaction with both sensor molecules.

Having first proven sensor response and detection of the chosen detection system in the solid state on a model system, a non-fluorescent solid polymer matrix, poly(styrene divinybenzene) resin (PS/DVB), Binder and Funtan turned their attention to solid PEI resin. They used two formulations of PEI provided by ALTANA AG and added either Stil-3 or Stil-4. As with their PS/DVB test, they stored the specimens in n-butylamine solutions and used fluorescence spectroscopy to detect sensor activation. The responses of both sensor molecules within PEI confirmed their findings from the preliminary experiments in solution.

Neopentyl glycol and solid PEI response
Finally, Binder and Funtan examined sensor activation in solid PEI under ‘real life’ conditions. Both Stil-3 and Stil-4 were embedded in PEI samples and exposed to NPG to determine how the sensor molecules would react. The researchers investigated the effect on samples exposed to either NPG at room temperature or in gas phase at 180°C. Control samples of PEI without sensor molecules were given the same treatment. They found that the sample at room temperature produced a decrease in fluorescence of 8% compared to a decrease of 26% in the heated sample, with a decrease of just 4% in the control experiment.

Lifecycle enhancement and waste reduction
By successfully embedding these sensor molecules into various polymer matrices, Binder and Funtan have demonstrated that this approach works well under different conditions, in both solution and solid state. This offers a potentially powerful tool for tracking the long-term degradation of PEI-impregnated protective coatings in real time; an important step towards prolonging the life of electric motors and enhancing the sustainability of all electric vehicles.

The next step in this work is to investigate the in-situ activation of Stil-3 and Stil-4 under engine-working conditions.

What further work will be needed to bring these sensors to market?

<>
There is intense interest from manufacturers, especially in the automotive and engine industries, where electromobility is considered a future key technology. Upscaling and long-term testing are in progress to validate data from laboratory experiments and move into technology, including process-development and long-term stabilities. ALTANA AG, as the PEI manufacturer and patent owner, will start such collaborations to bring the product to market. 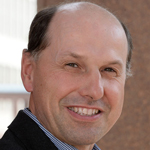 Wolfgang H Binder became a full professor of macromolecular chemistry at Martin Luther University Halle-Wittenberg in 2007. After a PhD in organic chemistry, and post-doctoral stays at Emory University, Atlanta, US, and the University of Vienna, Austria, he became associate professor at Vienna University of Technology, TU-Wien, in 2004.

The synthesis and development of novel polymers with applications in the areas of self-healing materials, life-cycle enhancement, biomedicine, charge-storage materials and novel concepts of circular economy. 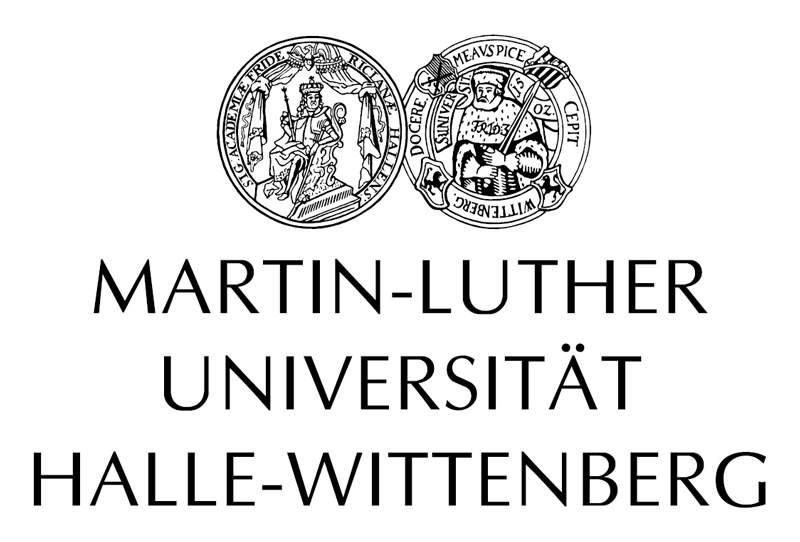