Health & Medicine
Lymphoproliferative disorders (LPDs) are characterised by the abnormal proliferation of lymphocytes – a white blood cell in the immune system. LPDs are a notable complication during the treatment of rheumatoid arthritis (RA), an autoimmune condition. In Japan, the incidence of LPDs in RA patients is high and the management and treatment strategies for these patients has been challenging. Dr Masao Tanaka from the Kyoto University Hospital Center for Rheumatic Diseases and fellow researchers conducted a multi-center retrospective cohort study of RA-LPDs. Their study shows that understanding risk factors can aid in the management of LPDs in RA patients.

Rheumatoid arthritis (RA) is a chronic systemic inflammatory condition that mainly affects joints, including those in the hands and feet, and can cause stiffness and painful swelling in the joints. It is an autoimmune condition, in which the body’s immune system attacks its own tissues. RA can worsen over long periods of time and can also lead to bone erosion and joint deformity. There is no permanent cure for this disorder. However, with physiotherapy and proper medications, the progression of the disease can be slowed down or almost stopped.

Since MTX is the standard drug in the treatment of RA, the risk of developing LPDs is unavoidable. In Japan, patients suffering from rheumatoid arthritis develop LPDs 3.43–6.18 times more frequently as compared to the general global population. Dr Masao Tanaka from the Kyoto University Hospital Center for Rheumatic Diseases, and his fellow researchers, formed the Working Group on LPD-associated RA (RA-LPDs) of the Japan College of Rheumatology, led by Dr Yasuo Suzuki. They conducted a multi-center retrospective cohort study of RA-LPDs to better understand the characteristics and prognosis of RA-LPDs. This understanding is crucial when considering treatment strategies at onset of the disease.

RA and lymphoma
LPDs are the excessive proliferation of lymphoid (tissue that produces lymphocytes). This proliferation can range from benign and self-limited to various forms of lymphomas (cancer of the lymph nodes). According to the World Health Organisation (WHO), LPDs developing in an immunocompromised host can be categorised into four groups, including LPDs associated with primary immune disorders, post-transplant LPDs, lymphomas associated with human immunodeficiency virus infection, and other iatrogenic immunodeficiency-associated LPDs. Other iatrogenic immunodeficiency-associated LPDs are lymphomas or lymphoid proliferations that develop in patients who have been treated with immunosuppressive drugs (ISDs) for autoimmune diseases or after transplants. This group can include all the cases of LPD in patients with RA using MTX, biological disease-modifying anti-rheumatic drugs (bDMARDs), targeted synthetic (ts) DMARD such as Janus kinase inhibitors, or other ISDs. 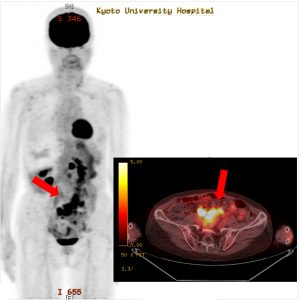 Positron emission tomography with fluoro-D-glucose integrated with computed tomography (FDG PET/CT)
depicts tissues that are abnormally proliferating and taking up more FDG. The higher the uptake, the brighter the image (red arrows). In the case on the left, there were deep lymph node lesions around the abdominal aorta. In the case on the right, a lymphatic lesion was found in the left parotid gland.

Associated factors and management
A significant advancement in the treatment strategy for RA has resulted in better inflammation control and improved the quality of life for patients. MTX, bDMARDs and tsDMARDs, which were developed for the treatment of RA in the 1990s, 2000s and 2010s respectively, have addressed this paradigm shift. However, the majority of RA patients live with the disease and its comorbidities, such as cardiovascular disease, infections, and cancer, for the rest of their lives. Clinically and statistically significant connections between RA and certain forms of malignancies have been revealed by meta-analyses of epidemiological studies. Lymphoma is the most dangerous of them.

Patients with RA may appear in clinical settings with a wide range of lymphoid proliferations or lymphomas, which pose a severe challenge for rheumatologists and haematologists. Early detection of patients with RA who are developing LPDs is clinically essential since it may improve their prognosis. LPDs have a wide range of clinical and pathological symptoms in people with RA, making early diagnosis difficult.

An LPD case in a patient with RA who got MTX was first reported in the literature in 1991. Since then, many case reports and case series have been published that highlight the development of LPDs in RA patients treated with MTX. These instances are generally referred to as MTX-associated LPDs. Patients with other autoimmune illnesses that receive ISDs, like polymyositis, granulomatosis with polyangitis, dermatomyositis, psoriasis, and Crohn’s disease, can also develop LPDs during or after treatment.

Physicians frequently encounter disease states that spontaneously regress simply by stopping ISDs like MTX and tacrolimus without any treatment for LPDs. This condition is referred to as ‘spontaneous regression’ (SR) in the management of LPDs associated with RA. The majority of patients maintain SR without any extra therapy in the post-SR period, although some relapse and require treatment. As a result, the clinical course of post-SR LPDs differs significantly from that of conventional lymphomas. This necessitates the development of a novel strategy for post-SR LPD management along with some useful prognostic indicators. Longitudinal investigations of the post-SR clinical course of LPDs are essential to attain this goal. However, only a few of these studies have been published, offering only limited solutions to the aforementioned problems.

Being over 70 years old was found to be a major risk factor for poor five-year overall survival.

Survival determinants
Dr Tanaka and his fellow researchers conducted a multi-center retrospective cohort study of RA-LPDs. They evaluated the clinicopathological aspects (including systemic symptoms, lymphatic lesion distribution patterns, and laboratory findings at the time of diagnosis) and follow-up data of 232 RA patients with LPDs. Their aim was to analyse overall survival and post-SR relapse-free survival. They were keen to estimate their determinants, which can help develop a treatment approach for LPDs in RA patients. They also compared the results of the laboratory tests three to six months prior to the post-SR relapse.

Based on these results, the researchers have proposed a scoring method to predict and assess the prognosis of LPDs associated with RA. This method applies the four identified and independent factors: age above 70 years, a performance status of 2–4, more than one extranodal lesion, and CHL histology.

Looking forward
Dr Tanaka’s work indicates that both post-SR relapse and the prognosis of LPDs associated with RA can be predicted by clinicopathological characteristics present at the time of LPD diagnosis, and suggests a way forward for improving patients’ prospects. As nearly a quarter of patients who attained SR had relapsed LPDs, vigilant monitoring is necessary, especially in the first two years after the LPD diagnosis. Blood lymphocyte counts should be checked on a regular basis to ensure that post-SR relapses are not missed. Despite the fact that the five-year overall survival rate of LPD patients with RA was nearly 80%, patients in the high-risk category as per the mentioned LPD grading technique should be closely monitored at their frequent visits.

During your research on LPDs associated with RA in the Japanese population, did you find any particular community or region in Japan to be more affected than others?

<>
That’s a good question. Strictly speaking, our multi-center study was conducted in the western part of Japan bordered by Tokyo, which covered not all of Japan but Kyushu area with high prevalence of human T-cell leukemia virus type 1 (HTLV-1). In that area, we found no difference in the incidence of LPDs associated with RA (RA-LPDs) by community or region.
There have been only five HLTV-1 positive cases of RA-LPDs reported in Japan so far. Some achieved SR, others died despite chemotherapy. HLTV1 positive cases are rare, so they were not in our cohort.

Harigai, M. (2018). Lymphoproliferative disorders in patients with rheumatoid arthritis in the era of widespread use of methotrexate: a review of the literature and current perspective. Modern rheumatology, 28(1), 1–8. 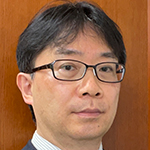 Johan’s background is botany and plant biotechnology, but his direction changed to geometry and mathematics in the past 20 years. He is co-founder of Genicap Beheer BV, developing technological and commercial applications based on the Superformula and Gielis Transformations.

Understanding the characteristics and prognosis of lymphoproliferative disorders associated with rheumatoid arthritis.