Research conducted by Dr Seong K Mun, Professor at Virginia Polytechnic Institute and State University, aims at maximising the utility of imaging technology in healthcare. Dr Mun has more than 40 years of academic research in imaging; beginning with the development of one of the first superconducting MRI systems in the 1980s. Along with his research partners, Dr Shih-Chung B Lo and Dr Kenneth Wong, Dr Mun highlights the existence of technological tools in healthcare domains, such as radiology imaging, and proposes a new visionary approach by which artificial intelligence tools can meet the demands of patient care in the near future.

Many industries today are undergoing digital transformations in order to keep up with the pace of a society enriched with technological advances. One domain heavily impacted by this is healthcare, and specifically radiology imaging, which has integrated a large number of complex digital tools over the past 40 years.

Broadly speaking, the field of radiology can be defined as medical imaging which is used to diagnose and treat diseases within the body. Radiology encompasses a variety of imaging techniques, including computed tomography (CT), positron emission tomography (PET), fluoroscopy, and magnetic resonance imaging (MRI). In 2017, a US Interagency Working Group on Medical Imaging identified advance high-value imaging as an ‘overarching theme to achieve better health outcomes and smarter health care spending through medical imaging’.

All radiological imaging devices have utilised technologies to enhance workflow and productivity. Even though there are currently more than 50 FDA-approved in the US, their clinical adoption remains slow. Dr Seong K Mun and his research partners highlight the importance of refocusing these tools to meet the operational demands of radiology. Their work helps us to envision a future in which healthcare and technology closely intersect, for the benefit of patients and radiologists alike.

The CAD development has been the result of a technological push, rather than an outcome driven by the clinical needs.

Pioneering radiology
Radiological imaging is historically at the forefront of adapting and incorporating technological advances in its workflow. This healthcare domain includes all imaging modalities which have become fully digital since the late 1990s. The use of these modalities results in an image, which is part of the patient-diagnosis procedure performed by physicians. Before the 1990s, these images were printed on physical films for interpretation by the clinicians and also for safe keeping. Keeping up with the pace of our advancing technological society, radiology eventually replaced all films with digital images. This created a better archive system and even became the basis for the development of many image-guided surgeries and the proliferation of modern radiation oncology.

Artificial intelligence in radiology
On a daily basis, a typical radiology department will conduct more than 50 different types of imaging studies. One of the first tools used for managing all the images is the Picture Archiving and Communication System (PACS), which is used to collect images from various imaging devices and provide highly sophisticated image management and communication functions for the department and the entire hospital. Radiologists, having access to the PACS, will interpret and analyse the images manually, a process which can be laborious and time consuming. Finally, a written report is generated using a voice recognition system provided by the Radiology Information System (RIS).

With the broad clinical adoption of digital transformation involving digital imaging systems and PACS, radiology began to incorporate more digital analysis methods, using tools which might readily conform to our definition of Artificial Intelligence (AI). The use of AI for screening digital mammography was seen as an early success of AI in radiology, The wide adoption of such tools has more to do with higher reimbursement rates in the US, while the use of such tools generated higher false positives and lower detections of breast mass. The Computer-Aided Diagnosis (CAD) became widely used among researchers and developers. This CAD exists in two forms: the computer-aided diagnosis (CADx) and the computer-aided detection (CADe). The CADx is an AI software tool, which enables the computer to provide a diagnosis for a physician’s review. The CADe, by contrast, can highlight the area of concern for further diagnostic evaluation. One example of the latter is the CADe screens for lung and breast cancer for asymptomatic but higher-risk populations. After the screening study, in cases where the computer suspects cancer, the patients can undergo a higher-precision diagnostic study. The use of screening digital mammography quickly attracted the interest of clinics, since this tool can provide the most basic output needed for early detection, which simply is a binary yes (disease present) or no (disease absent).

Digital images (chest X-ray or CT) for lung cancer screening is a further example of the success of CADe, which uses deep-learning convolutional neural networks (CNNs), a type of algorithmic model inspired by the primary visual pathway. With the AI tool, the radiologist’s cancer-detection accuracy and reading time can be improved by 30% in some instances such as lung cancer screening.

Pitfalls in practice
A successful application in the lab does not necessarily mean a successful application in practice. Even though CADe was approved by the FDA back in 1998, its adoption rate initially remained dramatically low, at less than 5%. This changed, however, when the US Center for Medical and Medicaid Services (CMS) permitted a higher reimbursement for the use of CADe for screening mammography.

There have been several studies that compared the reading of mammograms performed by the CADe and by a radiologist. A major study involving 271 radiologists and 323,973 women between January 2003 and December 2009 compared reading mammograms with and without the use of CADe. The study concluded that CADe did not improve mammography’s diagnostic accuracy, and at the same time increased the false-positive rates.

In the case of screening lung cancer using low-dose CT, the CAD tools were well-received for their efficiency in navigating large numbers of images per study. The AI software used was designed for everyday objects and they were not fully optimised for medical images. In medical images, subtle shades of grey are important but in everyday objects such as cars, outer edges are sufficient for recognition.

Current AI tools cannot incorporate contextual information into decisions, while in medical imaging, understanding the contexts of patient conditions is important. Another problem is dealing with varying image qualities. In medical images there exist variations of image quality based on the variety of imaging systems and their settings, and radiologists can ‘read through’ the image-quality variations. As an example, a very large national project using AI tools to screen diabetic retinopathy was terminated when the system worked well in the controlled lab environment, but failed in dealing with poor-quality images collected at many different clinics.

Need to refocus
AI tools have been accused of a gamut of limitations, but Dr Mun and his colleagues believe this may be because they remain too focused on a rather small and narrow domain – the image interpretation component – instead of seeing the larger picture of the full radiology imaging service and the health system. The inability to outperform radiologists when separating normal from ill-defined or abnormal structures, or differentiating disease patterns, does not prove that these tools need to be forgotten. Within a long chain of radiology operations there are many manual activities beyond diagnosis where AI can make significant improvements.

Dr Mun and his colleagues highlight that CAD development has been the result of a technological push, rather than an outcome driven by clinical needs. Refocusing AI onto different aspects of the radiology workflow and medical error reduction will potentially create many new efficiencies in the practice of radiology, which will increase the clinical utility and adoption of AI going forward.

Careful integration of various AI tools will make the imaging service more effective and timely, which increases the quality of care for patients.

New knowledge
AI can be effective in many aspects of radiology beyond diagnosis. It can create new knowledge and support personalised medicine, which is the future of healthcare. If the AI tools become a part of the entire workflow, then diagnostic imaging, clinical pathology, radiomics and genomics could merge into an integrated tool for precision medicine. This integrated system will allow a rapid, single-point-of-care diagnosis, rather than the current serial process that involves many appointments over days and weeks.

The example of AI use in radiomics and pathomics, also known as quantitative imaging, is of great importance. Radiomics involves the analysis of medical images and helps to extract features that can result in the determination of the patient’s phenotype. Pathomics has the same goal, extracting data from pathology images taken from patient tissues. AI can merge these two fields, creating an automated image analysis, and helping in the search for new features that might be left unnoticed by human eyes.

The future
The fear that AI will become a substitute for radiologists is not grounded in reality. The reality is the creation of a new specialty for radiologists who will use these sophisticated technological tools in pursuit of an integrated healthcare system. These new clinical diagnosticians will merge the work of radiologists, pathologists and other specialists. One of the key strengths of AI is the ability to integrate large volumes of data and various types of information. As such, AI will be able to facilitate integration of specialities such as pathology, radiology and genomics.

There is no doubt that we will soon be the witnesses of radiology’s next generation digital transformation. We will be able to perform traditional activities such as diagnosis better, faster, and more efficiently. At the same time, AI will generate new knowledge and integrate with other services, paving the way for a brighter future for healthcare and technology along with an immediate impact on patient care.

The work of Dr Seong Mun, Dr Shih-Chung B Lo, and Dr Kenneth Wong, has had the cumulative effect of laying the groundwork for the closer integration of radiology and technology.

How can AI help in the advancement of theranostics (the combination of therapy and diagnosis), for example in follow-up oncology treatment?

The combination of therapy and diagnosis will involve large amounts of data from multiple sources. Various AI tools will play important roles in synthesising and integrating seemingly unrelated information into a highly individualised treatment plan which dynamically adapts as the patient proceeds through their treatment. 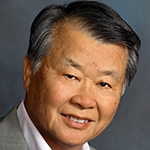 Dr Mun has been involved in digital transformation technologies involving radiology since the 1980s. Activities include R&D for an early MRI system, R&D for PACS network (picture archiving and communication), global teleradiology for the Department of Defense (DoD) and imaging AI research. He was CEO of Open Source EHR Alliance. Currently he is a senior imaging scientist for the APOLLO cancer imaging project of the National Cancer Institute, DoD and Department of Veterans Affairs.

Dr Seong K Mun highlights the existence of technological tools in healthcare domains, such as radiology imaging, and suggests how these tools might be improved to benefit patients within the context of healthcare systems.