Health & Medicine
Primary hypertension is a major health concern and can cause serious cardiac, renal and brain complications responsible for about 10% of worldwide health burden and costs. The development of hypertension is triggered by genetic factors that, in turn, are modulated by biological and environmental factors. Many drugs are available for the treatment of hypertension, but none target the underlying genetic mechanisms. During the last 25 years, no real progress in treatment efficacy has been achieved. Dr Giuseppe Bianchi, Professor Emeritus at the Vita-Salute San Raffaele University, Milan, and CSO at Windtree Therapeutics, aims to explore the relationship between an individual’s genetic code and how they respond to rostafuroxin that ‘selectively’ targets them.

Over the past 40 years, the drugs used for hypertension (high blood pressure) have shown their limitations, partly due to their inability to target the causal genetic mechanisms of the condition. The majority of patients (50–85% globally) still do not reach the therapeutic target of blood pressure control. In 20–25% of patients, this control is still not achieved when a combination of multiple drugs is used. These patients are therefore considered carriers of ‘resistant hypertension’.

In the US, the control of blood pressure decreased by 20% in all hypertensive individuals within four years (from 2015 to 2018). This decrease is slightly greater in White patients compared to African American patients. Alongside this, many drugs may fail to fully protect other organs from the damage that hypertension can cause. Dr Giuseppe Bianchi, Professor Emeritus at the Vita-Salute San Raffaele University, Milan, and CSO at Windtree Therapeutics, has conducted a study on rats infused with ouabain, and his findings cast doubts on the ability of current drugs to fully protect from cardiac and renal complications, even when they are able to normalise blood pressure. Ouabain is a steroid hormone which is able to improve the contraction of the heart muscle and increase blood pressure, making it a promising target for treating hypertension.

Precision medicine
Drugs interact with other body molecules to exert their wanted or unwanted effects. These molecules are encoded by someone’s genetic makeup and may vary from person to person (gene variants). Some of these gene variants may trigger hypertension and organ damage in the presence of specific biological and environmental factors.

Hypertension and its associated complications have significant health and economic costs.

Over the last 30 years, many genetic variants (>1,000) have been found to be associated with blood pressure level. Unfortunately, their causality in triggering primary hypertension and organ damage is still open to discussion. Therefore, Dr Bianchi suggests that patients should be stratified according to their plausible associated genetic characteristics, with each group being assigned to a therapy developed for its ability to selectively inhibit the biochemical events triggered by these respective genetic characteristics. The selective therapeutic efficacy of medication in this subset of patients is useful to demonstrate both its ability to cure these patients and the disease causality of the gene variants at work in them.

Precision medicine is based on the principle that curative therapy has to selectively target the molecular ‘abnormality(ies)’ causing the disease, while minimising the interaction with the other body molecules. The molecular abnormalities can be caused by different gene variants in different people, hence the need for a personalised approach.

The advantages of rostafuroxin
Dr Bianchi explains that one particular medication, rostafuroxin, may be important in taking the first steps towards precision medicine for hypertension. Unlike current drugs used to treat hypertension, rostafuroxin is able to address the genetic causal mechanisms underlying the condition in a subset of patients, and this has been demonstrated in animal and human trials. Genetic testing must be used to identify the patients who are most likely to respond to treatment.

The drug works by selectively inhibiting a common step of the pathways leading to hypertension and organ damages, triggered by endogenous ouabain (EO) and mutant adducin. It disrupts the binding to the cSrc-SH2 domain of mutant adducin and of the ouabain-activated Na-K pump at 10–11 M, being ineffective on wild adducin or non-activated Na-K pump or on the other 34 receptors or proteins involved in cardiovascular regulation up to 10-5. In other words, it inhibits the effects of EO, a type of hormone produced by the body which is seen at higher levels in the blood of some people with hypertension. Levels of EO in the body tissues are controlled by certain variants of the genes (LSS, HSD3B1 and MDR1) which affect both its synthesis and transport. Moreover, rostafuroxin inhibits the effects of mutations in the adducin gene, which are associated with body sodium and blood pressure changes both in rats and in patients.

When EO is given to rats, they develop high blood pressure and cardiac and renal damage. All these conditions are prevented by administration of rostafuroxin, while amlodipine (a first-line drug treatment for hypertension) only normalises blood pressure.

Rostafuroxin has been developed with a series of studies across different settings in presence or absence of the above gene variants: suitable animal models, isolated cells, and protein–protein interactions in animals and humans, together with an associated medicinal chemistry programme.

There have already been many studies exploring the potential benefits of rostafuroxin in treating hypertensive patients. These include Phase I drug trials, which look at the safety and tolerability of medication, and Phase II trials, which are larger studies that investigate how well the treatment works and the risk of side effects. So far, six clinical studies have been done, involving 84 healthy volunteers and 802 hypertensive patients.

Clinical trials
One Phase II trial was the OASIS-HT trial. This was a double-blind, crossover study, meaning that patients are given either the test drug or the control drug for the first part of the study, before being swapped to the other group for the remainder of the study. Over 400 Caucasian people with hypertension were involved in the trial, and the results showed that rostafuroxin did reduce blood pressure only in a subset of naive patients carrying the above gene variants either alone or grouped in what the researchers established as genetic profile 2. Profile 2 consists of variants of adducin (ADD1 rs4961), adducin (ADD3 rs3731566), lanosterol synthase (LSS rs2254524), 3 hydroxysteroid dehydrogenase/(5)-(4)isomerase type 1 (HSD3B1 rs10923835), and ATP-binding cassette subfamily B member 1 (ABCB1/MDR1 rs1045642) genes, the last three being involved in the regulation of EO tissue levels.

Unlike current drugs used to treat hypertension, rostafuroxin is able to address the causal mechanisms underlying the condition in a subset of patients.

Conversely, the blood-pressure-lowering effect of rostafuroxin was much less in the Chinese groups. It is well known that different ethnicities metabolise drugs at different rates. A number of arguments support the notion that in the presence of such low doses (0.05–0.5mg daily), rostafuroxin may be metabolised by Chinese participants before the drug has time to act. This hypothesis is going to be tested in future studies.

Future directions
Primary hypertension and its associated complications have significant health and economic costs. As mentioned above, the current drug treatments have many limitations that could be overcome by using a more targeted approach that may offer a more effective and resource-efficient approach. Dr Bianchi emphasises that rostafuroxin is a more efficient treatment option on blood pressure and organ damage for about 25% of the hypertensive population who have mutations in the adducin gene and in genes that regulate EO synthesis and transport. The drug is able to safely reduce blood pressure, as well as protect organs from damage caused by hypertension, something that accounts for around 10% of overall global health expenditure.

While the selective effect of rostafuroxin on organ damage and blood pressure has been demonstrated in animal models, this has not been tested in human subjects. However, there are many indications that heart or kidney damage caused by hypertension is associated with the gene variants included in the profile 2 subset of individuals. Therefore, it is likely that these protective effects of rostafuroxin will be translated to patients.

Many patients currently receive a combination of different drugs to achieve the desired response. Rostafuroxin has the potential to be a single-drug replacement for these combination therapies in people with specific gene variants, particularly for those with resistant hypertension, meaning better outcomes for patients and more cost-effective use of medications.

What will Phase III trials for rostafuroxin look like?

Phase III trials should look for the therapeutic benefit of rostafuroxin in two types of patients carrying the genetic profile 2 in comparison (to be discussed) with placebo (trial 1) and a standard treatment losartan or amlodipine (trial 2): type 1 – patients with so-called resistant hypertension – that is, blood pressure above the normal range after one month of treatment when treated with three different types of drugs; and type 2 – newly discovered patients who do not respond to the first two separate treatments. Markers of cardiac and renal damage should also be measured. Composite primary endpoints include: number of patients with reported adverse events (AEs), therapy discontinuation, changes in his/her quality of life, in office (or home) systolic blood pressure, the number of drugs and, when possible, markers of kidney or heart damage. 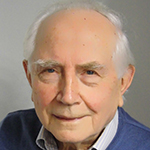 Giuseppe Bianchi trained in cardiovascular-renal pathophysiology and biochemistry at the Universities of Milano, Parma, Padua, London, and Glasgow, with a focus on cardiology and nephrology. He is Hon MD at the Universities of Berlin and Uppsala, and won awards from British, American, and Italian societies of hypertension, the USA National Kidney Foundation and other scientific organisations. At present, he is Professor Emeritus at the ‘Vita Salute’ San Raffaele University, and CSO at Windtree Therapeutics.

Over the years, Dr Bianchi has combined his academic and clinical experience with parallel work in collaboration with pharmaceutical companies (Lepetit SpA, Farmitalia Carlo Erba, and Sigma-Tau SpA, CVie Therapeutics and Windtree Therapeutics) in order to develop a targeted therapeutic approach to cardiovascular diseases through laboratory and clinical practice.