Fresh water is one of the key ingredients for sustaining human life. Obtaining sufficient quantities of safe and drinkable water remains a challenge, however. One important approach is to make use of salt water from our unusable water through a process known as desalination. Professor Matthew Suss at the Technion Israel Institute of Technology, with his PhD candidates Mr Eric Guyes and Ms Rana Uwayid, are researching one important technique – capacitive deionization – to make the process more efficient.

The Earth’s surface might be over 70% water but less than 3% of that is fresh water. Of that 3%, over half is trapped in the form of glaciers and ice caps, leaving just a small remaining percentage of drinkable ground water. While water might seem abundant, the small freshwater reserves on Earth mean that access to this precious resource is precarious. Drinkable water is so scarce that even small increases in demand are enough to cause considerable stress to water access.

As the population worldwide continues to grow, so does the demand for water for direct consumption, agriculture, and industry. At present, agriculture alone accounts for nearly three quarters of the world’s water use. This means there is a pressing need for new water-purification techniques.

One such technique is desalination. Desalination is the process of removing salt from water, and in some senses it seems the perfect solution to a growing water crisis on a planet where most of our water is found in the oceans. Why, then, do desalination plants produce less than 1% of the world’s drinking water? Part of the answer to this is in the cost and complexity of the desalination process, which requires expensive equipment, heavy maintenance, and large plant sites. It also has a sizeable energy footprint, often making it an unattractive option in terms of energy and financial cost.

Dr Matthew Suss, Mr Eric Guyes, and Ms Rana Uwayid at the Technion Israel Institute of Technology are taking a different approach to the desalination process, by working with a particular technique called capacitive deionization cycling. The advantage of this method of desalination is that it is far more compact and can be tuned to leave desirable chemical species in the water. Part of the team’s work is finding ways to optimise the cell and electrode designs to do just this.

Desalination process
There are many ways to remove salt from water. One is simply to boil the water, leaving the salt remaining, and then allowing the water vapour to condense again. This is known as thermal distillation and, while simple, is incredibly energy intensive. Instead, most standard desalination plants make use of membranes that filter different chemical species from the water, leaving desalinated water as a product.

Usually salts in water exist as ions, which are charged chemical species. Depending on the design, membranes can be used to filter ions based on their size or charge. One of the problems desalination plants face is that water is often treated for purification using chlorine-containing compounds before desalination, and any residual chlorine can cause damage to these expensive constructions.

Capacitive deionization works in a markedly different way to this ‘reverse osmosis membrane filtration’ and has the huge advantage of only requiring very low voltages (the voltage demand is less than that produced by a single AA battery). Capacitive deionization works by pumping the water into a cell which contains two pieces of carbon, called the electrodes. A voltage is then applied between them, causing a current to flow and the salt to move into the electrodes, where it can be stored.

What makes capacitive deionization such a remarkable technique is the structure of the electrodes. These are made from nanoporous carbon, meaning that each electrode has a series of miniature tunnels through its structure, making the total surface area more than a thousand square meters – the size of five tennis courts – for just one small electrode. The expansive surface area means the electrode can store large quantities of salt and this storage capability can be enhanced even further by treating the electrodes with acid.

One of the challenges of this emerging technology is dealing with the problem of electrode degradation.

Corrosive chemistry
The potential portability of capacitive deionization and low energy demands make it an attractive alternative to membrane filtration. One of the challenges for progressing this emerging technology, however, is dealing with the problem of electrode degradation.

The other approach is to change the construction of the electrode. Suss and Uwayid found that introducing multiple stacked layers of carbons also significantly enhanced electrode lifetimes. Their work in this area not only involves developing new electrodes, but attempting to fully understand the chemistry that is part of the degradation process. Understanding the chemistry that occurs during the cell voltage cycling process is key to being able to develop mitigation strategies and improve the performance of the technology. The team believes their recent improvements in cell stabilities are vital for being able to develop exceptionally long-lasting, highly and tunably selective capacitive deionization systems for water treatment applications.

Selective filtering
Capacitive deionization cells do not just convert salt water into fresh. Suss and Guyes have managed to change the carbon electrode design to create selective filters for different ionic species. Freshwater for irrigation must have a low amount of sodium ions, whereas calcium is less problematic for this application and therefore removal of sodium species must instead be prioritised. By tuning the composition of the carbon electrodes, Suss and Guyes have been able to achieve excellent sodium/calcium separation factors and create a stable cell that maintains this performance for over 1,000 cycles.

As the demand for water grows, capacitive deionization may be a key technology in providing drinkable water. The ability to build cells on both small and large scales may also make this a considerably more flexible solution than current water desalination plants that require extensive infrastructure to build.

What do you think are the next big improvements for capacitive deionization cells?

Increasing the capacitive deionization electrode lifetime to 10,000+ cycles would be a huge step forward in terms of economic viability because they could potentially last years without being replaced. Also, achieving ‘perfect’ selectivity, where we only remove a particular ion and leave all others in the water, is an attainable goal and one we have made much progress towards. Lastly, we are extremely excited about capacitive deionization’s potential to remove ions like arsenic, phosphate, and boron, as well as organic acids that are found in waste waters, like medicinal residues. 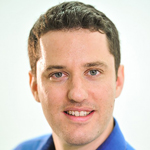 Matthew Suss obtained his PhD from Stanford University in 2013, and is an associate professor at Technion, where he is affiliated with the Faculty of Mechanical Engineering, Wolfson Department of Chemical Engineering, and the Grand Technion Energy Program. His research interests are primarily cleantech (clean energy and water).