Physical Sciences
Understanding the physical mechanism underlying negative ion formation in low-energy electron collisions with lanthanide atoms is of fundamental importance in physics and chemistry. It also has important implications for a wide range of applications, from catalysis to drug delivery and water purification. Unfortunately, the complexity of the interactions among electrons in lanthanides has for a long time made it virtually impossible to reliably predict the energetics of the electron binding and the properties of the resulting negative ions. Professor Alfred Msezane and his group at Clark Atlanta University have developed a rigorous and powerful theoretical description of the electron attachment process in lanthanide atoms.

Lanthanides, along with the actinide atoms, are a group of atoms that occupy large blocks near the bottom of the Periodic Table. They are heavy and complex atoms, containing between 57 and 71 electrons orbiting in complex trajectories around a positive nucleus, with velocities of about 1% the speed of light. Lanthanides play important roles in modern chemistry and exhibit a number of unique properties, making them suitable for applications in catalysis, superconducting devices, optoelectronics and fluorescent materials for drug discovery. They are also used to regulate nuclear reactors.

Most of the chemical applications of lanthanides exploit their positively charged ions (lanthanide atoms with two or three electrons removed, for instance). More recently, however, increasing attention has been devoted to the ability of lanthanide atoms to interact with beams of low-energy electrons, bind with them, and form large negatively charged ions, or anions. The prospect of understanding and controlling the formation of these anionic species is of extraordinary interest from a fundamental physical perspective, but it can also give access to unprecedented and exotic chemical processes, which have great technological and societal impact. For instance, heavy negative ions can provide efficient and inexpensive catalysts for water purification in chemical reactions that involve the conversion of water into hydrogen peroxide. This can potentially be applied to the large-scale processing of water for civil uses in developing countries.

Professor Msezane’s research is devoted to developing rigorous and accurate theoretical frameworks to account for the physical phenomena occurring when lanthanide atoms (and related systems, such as actinide atoms and fullerene molecules) interact with low-energy electrons. He has formulated a novel mathematical approach – called the Regge pole method – for the prediction of electron attachment to heavy many-electron systems, yielding stable negative ions. The method is proving to be a major theoretical breakthrough in unveiling the complex quantum-mechanical interactions at play during the formation of lanthanide anions.

Electron affinity
The central physical measure for the ability of an atom to bind an excess electron is called the electron affinity of the atom. This can be defined as the energy released when one electron is added to a neutral atom to form a negative ion. The determination of reliable values of electron affinities for complex heavy systems like lanthanides, actinides, and fullerene molecules is currently one of the most challenging problems in atomic and molecular physics, both experimentally and theoretically.

Theoretical models of electron affinity determination must consider that a large number of electrons within the atom are interacting among themselves, and with the incoming low-energy electron. This gives rise to two important quantum-mechanical phenomena – the electron-electron correlation and the core polarisation interaction – which play a crucial role in the electron attachment process. Although sophisticated computational approaches, such as the relativistic configuration interaction method, can be used to estimate electron affinities, their use is often cumbersome, demanding and plagued by uncertainty, because of the large number of electron configurations which must be included in the calculations in the case of lanthanides. Also, the interpretation of the calculated results can be plagued by ambiguities.

The electron attachment mechanism
As a low-energy electron (incident) approaches a neutral lanthanide atom, it initially travels along a linear path, similar to a bullet approaching its target. However, in the vicinity of the atom, the complex interaction between the incident electron and the electrons belonging to the atom causes the electron to deviate (or ‘scatter’) from its original path. The magnitude of this deviation is linked to a quantum-mechanical property of the incident electron (its complex angular momentum) and to its velocity, which is related to its kinetic energy. In some cases, the effect of the scattering can be sufficient for the electron to become trapped. In this situation, the electron effectively occupies a new stable quantum-mechanical state within the atom, and the system acquires a negative charge.

The Regge pole method, developed by Msezane, is capable of accounting for the essential physical effects in their full complexity and provides quantitative estimates of electron affinities. Crucially, Msezane’s approach does not require input from either experiments or other theory; it can therefore be used to study electron attachment in systems for which measured values are not available, and to aid the interpretation of experimental data.

It is important to realise that the incident electron may not always occupy the ground state of the newly formed anion. Metastable and excited states can in fact also play a role in the anion formation, and they can substantially complicate the interpretation of experimental measurements and theoretical calculations. One of the strengths of the Regge pole method is its unique ability to identify the essential states of the anion that can form during the collision, and to determine unambiguously the binding energy of its ground state, from which the electron affinity can be extracted.

Scattering total cross sections
The central quantity determining the effectiveness of scattering interactions during anion formation in low-energy electron scattering experiments is the elastic total cross section. It can be interpreted as a cross sectional area in the vicinity of the neutral atom within which quantum-mechanical interactions cause the incoming electron to experience scattering. The second important quantity is the electron binding energy, which is the minimum energy required to form a stable negative ion. The Regge pole method provides the unprecedented ability to calculate anionic binding energies of complex systems from the characteristic sharp peaks appearing in the calculated elastic total cross sections. The ground state negative ion binding energies in turn determine the electron affinities of the systems.

The robustness and reliability of Msezane’s method has been benchmarked by comparison to measured electron affinities of fullerenes (C60 and C70), the Au and Pt atoms, and the highly radioactive At atom. “This theoretical feat”, explains Msezane, “has never been accomplished before. This innovative approach to extracting reliable electron affinities of complex heavy systems from the ground state electron elastic total cross section calculations represents an unprecedented theoretical achievement and provides a robust and reliable method of calculating unambiguously electron affinities for the first time.”

It provides a robust and reliable method of calculating unambiguously electron affinities for the first time.

The Regge pole method at work
Regge poles, singularities of the scattering matrix, rigorously define resonances and in the physical sheets of the complex plane they correspond to bound states. This explains the great success of the Regge pole method in calculating reliable ground and excited states binding energies of negative ions formed in low-energy electron collisions with complex heavy systems, such as the lanthanides.

In addition to providing robust calculations of electron affinities, the Regge pole method offers a powerful and efficient means of reconciling and rationalising results obtained from experiments and from sophisticated theoretical methods, such as configuration interaction calculations, thereby removing some of the ambiguities that make these data difficult to interpret. “Many existing experimental measurements and sophisticated theoretical calculations”, says Msezane, “have considered the anionic binding energies of the stable, metastable and/or excited negative ion formation to correspond to the electron affinities of the considered lanthanide and actinide atoms. This is contrary to the usual meaning of the electron affinities found in standard measurements of complex systems, such as Au, Pt, At and fullerene molecules.” Indeed, there are cases in which conventional theoretical methods or experimental measurements fail to provide a correct interpretation of the electron affinities, and they can yield binding energies that correspond to those of quantum-mechanical states of the anion which are not the ground state.

These findings highlight the extraordinary potential of the Regge pole method as a revolutionary, rigorous, and robust approach to the calculation of the electron affinities of complex many-electron atoms and molecules.

What are the key features of the Regge pole method that you have developed, and what future applications are you envisioning that will benefit most from your approach? 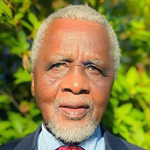 Alfred Msezane, Professor of Physics and Founding Director of CTSPS at Clark Atlanta University, is a Fellow of Royal Society of Chemistry, American Physical Society, Institute of Physics and AAAS. He holds B.Sc (Hons), MSc and PhD degrees in physics.