The interaction of water with biological tissues plays crucial roles in maintaining cells and keeping complex organisms alive and healthy. Dysfunctions in biological processes involving water can lead to pathologies or death. For instance, age-related dehydration in bones leads to bone weakening with more frequent fractures, although the origin of this process is still poorly understood. Using powerful computational techniques, Dr Valerie Welborn at Virginia Tech, shows how water interacts at a fundamental molecular level with bones, and how age-related effects influence the ability of water to bind to the bone matrix.

Water plays a fundamental role in all living organisms. From simple unicellular organisms to complex animal and plant species at the top of the evolutionary scale, all living organisms depend on water to carry out the complex wealth of biochemical processes that, collectively, keep them alive. In humans, water constitutes up to 75% of the total body weight and a loss of 15% of this bodily water can often result in death.

The biological importance of water is largely related to its ability to act as a ‘universal solvent’ for most chemical species (including oxygen and nutrients) that need to be transported inside cells or between cells in different parts of the body. Water, however, also plays more subtle roles in supporting life, for instance by regulating chemical reactions in cells or by binding to specific tissues, which modifies their physical and physiological properties.

In particular, a decrease in the concentration of bound water in bones has been shown to contribute to their weakening. However, we do not understand why this is the case. Dr Valerie Welborn at Virginia Tech uses state-of-the-art computational techniques based on quantum mechanics to devise a detailed molecular picture of how water interacts with living bones and how age affects this interaction.

Simulating water dynamics in living organisms
Welborn applies a computational method known as density functional theory to study how water molecules interact and bind to the mineral component of bone. This approach relies on the laws of quantum mechanics to provide quantitative measures of the changes in electron density, which governs the formation or breaking of chemical bonds. Changes in chemical bonds are directly responsible for changes in the atomic bone structure which, in turn, affect the strength of bones at the macroscopic scale. Although density functional theory is frequently applied in the study of structure, reactivity, and chemical properties of molecules and materials with extended atomic structure, Welborn’s work is showing how this approach can also be used to provide insight into specific physiological and pathological conditions in vivo. Her goal is to bridge the gap between molecular and macroscopic descriptions of living tissues and, potentially, to help develop innovative approaches to therapy and age-related condition control.

Water binding
The molecular structure of water is very simple: two hydrogen atoms are bound to an oxygen atom forming an angle of about 104 degrees. This molecular geometry, which stems from the distribution of the electrons within the molecule, gives water unique characteristics, including its ability to form relatively strong bonds with other water molecules creating a cohesive water network, or with different molecules present in its environment. The process by which water molecules form bonds with other molecular entities such as proteins, small molecules, ions or even surfaces, is called ‘hydration’. Bound water is different from mobile water: mobile water flows within a tissue, in which it can be responsible for nutrient transport, whereas bound water is substantially more static and contributes to the overall properties of the tissue to which it is associated.

Water adsorption plays a crucial role in maintaining the health and mechanical strength of bones.

The role of water in bones
The mechanical properties of mammalian bones are still poorly understood, owing to the complexity and high subdivision of the tissue, which eludes most experimental and theoretical characterisation techniques. Nevertheless, we know that bone strength arises from the hierarchical assembly of an inorganic matrix (a mineral known as hydroxyapatite) and an organic phase composed of the protein collagen. Water constitutes 10 to 20% of the bone tissue in either its mobile or bound forms, and plays an essential role in the integration of hydroxyapatite and collagen. Bound water helps to prevent fracture such that the amount of bound water correlates with bone strength. Mobile water fills in pores such that the amount of mobile water correlates with bone porosity (eg, bone fragility). It has also been observed that the amount of bound water decreases with age, leading to a progressive decline of bone health in older individuals, whereas the amount of mobile water does not change significantly.

A quantum mechanical model of water–bone interaction
To analyse the origin of the observed effects of bound water depletion in bones, Welborn has developed a simplified bone model that can be used for density functional theory simulations, while at the same time providing an accurate representation of an atomistic bone–water interface. Her approach differs from previous attempts to model bone-water interfaces quantum-mechanically, both in terms of the structural complexity of the hydroxyapatite–collagen system and in the explicit inclusion of the water environment in the vicinity of the bone–water interface. Her approach also accounts for the mobile nature of the hydration environment and the influence of ageing effects, by considering an ensemble of a large number of atomic configurations representative of different potential arrangements of water, hydroxyapatite, and collagen molecules.

Bone ageing and water adsorption
By analysing the water adsorption properties as a function of the atomic environment in this model bone system, Welborn has been able to arrive at some important conclusions concerning the factors responsible for the progressive decay of the mechanical properties of bones with age. She has shown that the water adsorption properties of hydroxyapatite are regulated by the presence of collagen molecules in the vicinity of its surface, which is suggestive of a complex and intricate interplay between the organic and inorganic components of bones at a molecula scale.

Simulations provide a detailed molecular representation of the factors responsible for bone decay with age.

Molecular conformation and bone strength
Based on her simulations, Welborn was also able to prove that the ‘quality’ of the collagen molecules plays a central role in favouring water binding to the inorganic hydroxyapatite surface. Collagen can exhibit different atomic structures depending on the nature of its environment. In young and healthy bones, it typically adopts a characteristic triple helix structure where three chains of bound amino acids (known as polypeptides) fold to form intertwined helices. This right-handed triple helix is stabilised by a large number of weak chemical interactions known as hydrogen bonds. Welborn’s simulations show that well-folded collagen triple helices favour water adsorption by reducing the adsorption area per water molecule on the hydroxyapatite surface. By contrast, ageing or diseased bones, which are characterised by partially unfolded collagen helices, exhibit reduced water adsorption properties, consistent with the bone fragility observed at a macroscopic scale.

A molecular picture of living tissues
The approach proposed by Welborn in her study of bone ageing is beginning to unravel the complexities of water–tissue interaction in bones, of molecular conformation, and of the role of the physiological environment surrounding living tissues. The model of bone ageing emerging from her simulations is fully consistent with observed experimental trends and provides microscopic insight at a previously unthinkable level of detail. It also makes it possible to study potential remediation strategies to control age-related bone decay, for instance the possible role of hydrated ions in the growth or remodelling of the inorganic component of ageing bones. The generality Welborn’s computational approach, which exploits principles from quantum mechanics with no need of empirical data, also paves the way for the analysis, at an unprecedented level of detail, of the interaction of water with a variety of organic tissues and biochemical processes occurring in them.

The computational methods that you have proposed in your study of age-related bone weakness offer a new approach – and, potentially, treatment – of wide classes of diseases involving water interaction with living tissues. How do you think your approach will impact therapy and disease prevention?

With the simulation of a more extended set of physiological conditions, our methods can help to understand the root cause of tissue decline with age or disease. A detailed understanding of pathological conditions at the atomistic scale will allow us to get ahead of many diseases in two ways. First, it will allow the development of early detection and better monitoring techniques such that treatment can occur before it is too late. Second, it will allow the identification of points of therapeutic intervention such that we could stop or reverse a pathological process rather than focusing on treating the symptoms. 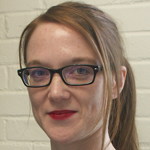 Dr Valerie Vaissier Welborn completed her undergraduate education at ESPCI ParisTech, and her PhD in physics at Imperial College London. After a postdoc with Troy Van Voorhis at MIT and another with Teresa Head-Gordon at UC Berkeley, Valerie became an Assistant Professor in computational chemistry at Virginia Tech in 2019.