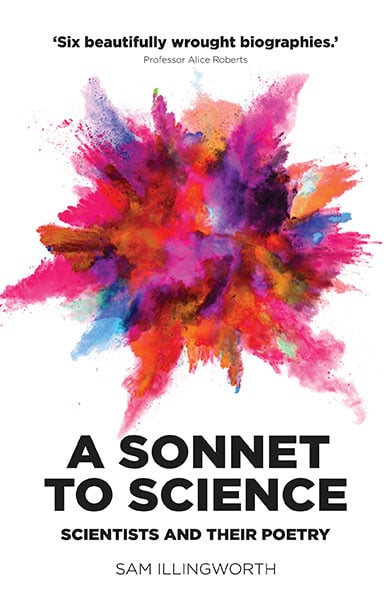 I have a book coming out – A Sonnet to Science will be published by Manchester University Press on the 31stMay. It represents the culmination of two years researching the poetry of a number of well-known (and lesser-known) scientists and how this affected their lives and scientific research. It was a lot of work, but I loved every minute of it.

The purpose of this opening paragraph (and indeed this article in general) is not a humble brag, nor is it a narcissistic attempt to convince you of my work ethic, or even a plug of my forthcoming book (a happy side effect), but rather it is to serve as a demonstration of one of the positive outcomes that can come from giving careful consideration to the narrative of your outreach.

Just over five years ago I started writing an irregular blog called The Poetry of Science. It had a simple premise: I would read a scientific research article and then write a poem about it, in an attempt to communicate the science to a wider audience. To begin with that audience wasn’t very wide at all; a monthly readership of around 30-40 people mainly made up of my close family and some poorly trained bots. However, the reason that I started writing this blog was because I loved writing poetry, and despite my (rather severe) aesthetic limitations I wanted to create an outlet in which I could combine this passion with my day job of researching and teaching science communication.

It is important to stress that at this point in my academic career I had not conducted any research into the relationship between science and poetry, it was simply something that I found interesting and which I thought might be a useful vehicle for developing a couple of future outreach activities. However, in writing my blog my confidence began to grow, not only in writing (and performing) poetry but also in the knowledge that this approach was something that seemed to appeal to a wider audience.

After about a year or so, the interest that my blog was beginning to generate also encouraged me to think about how I could conduct actual research into the relationship between science and poetry, resulting in my first publication on the topic: Are scientific abstracts written in poetic verse an effective representation of the underlying research?One of the outcomes from this piece of research was that scientists actually found my poetry to be less accessible than the traditional form of scientific abstract! However, instead of deterring me from writing poetry, the feedback that I received from these philistinesrespected academics made me realise that I needed to perhaps better consider my audience. In so doing, I not only developed my writing style but also started thinking about ways in which I could use poetry as a facilitatory tool to develop dialogue, rather than as a one-way medium through which to simply communicate research findings.

This thinking ultimately resulted in me re-focussing my entire approach to outreach. Up until this point I had been involved in a lot of outreach and public engagement, but my approach had always been somewhat piecemeal and lacking either a central narrative or USP. However, buoyed by the success of my blog I began to ensure that all of my outreach was now centred around poetry, be that facilitating science poetry slams, organising poetry competitions, or running poetry writing workshops for scientists.

This process led to me applying for (and winning) a small Research Grant from the Royal Society in 2016 to conduct an investigation into famous scientists who wrote poetry, why they might have chosen to do this, and the impact (if any) that this had on their scientific achievements. The research that I conducted during this grant is what formed the basis of my forthcoming book, neither of which would have been possible without my blog, and in particular the way in which it caused me to better consider the narrative of my outreach.

If you are reading this and thinking that your own outreach, whilst enjoyable, is somewhat lacking in a definable narrative then I encourage you to pause for a moment and take stock of your most recent initiatives. Where are the commonalities? Is there a topic / audience / media to which you either keep returning or else feel particularly well suited? If so then consider using this to develop a more powerful narrative around your outreach, as by doing so you will likely be able to refocus your efforts into something not only more cohesive, but ultimately more rewarding in the process.

Dr Sam Illingworthis a Senior Lecturer in Science Communication at Manchester Metropolitan University, where his research involves using poetry to facilitate dialogue between scientists and non-scientists. You can find out more about Sam’s wok by visiting his website: www.samillingworth.com.

Building bridges between experts and the public: a comparison of two-way communication formats for flooding and air pollution risk
2018-05-18 | journal-article
Geoscience Communication Discussions

Give me five! – reasons for two-way communication between experts and citizens in relation to air pollution risk 2018-04-27 | journal-article
Advances in Science and Research Read This Article

What does the UK public want from academic science communication? 2016-06-07 | journal-article
F1000Research

Get Social With Sam