Monitoring air quality and assessing personal pollutant exposure in urban settings remain challenging tasks in atmospheric science. As part of this monitoring, low-cost sensors have become increasingly available. This allows makers to assemble their own air quality stations according to online instructions, and institutions to multiply the number of measurement points. However, most of these commercial devices suffer from limitations in the treatment of the data collected. Fabian Lenartz at the Scientific Institute of Public Service (ISSeP) in Liège, Belgium, has developed a low-cost versatile monitoring device – Antilope – that is suitable for fixed and itinerant measurements, both indoor and outdoor.

Air pollutants are hazardous chemicals, in most cases of anthropogenic origin, that can cause health complaints, including cancer, respiratory and cardiovascular diseases, reproductive disorders and birth defects. In addition, they can exhibit adverse environmental and ecological effects, which often manifest themselves at a very large, or even planetary scale, as in the case of greenhouse gases. Man-made air pollutants largely originate from the incineration of fossil fuels to produce energy (heat and electricity), from major industrial processes, from transportation and from agriculture. There are many important air pollutants associated with traffic, burning, and heating, including nitric oxide (NO), nitrogen dioxide (NO2), ozone (O3), particulate matter (PM2.5) and black carbon (BC) (see Wallonair, 2022). Of these, NO is emitted directly from sources, whereas other pollutants are generated in the atmosphere through a chain of chemical reactions. It is therefore one of the missions of the Air Quality Unit of the Scientific Institute of Public Service (ISSeP) in Liège, Belgium, to provide the most rigorous assessment of atmospheric pollution and population exposure.

Air pollutants tend to pose a greater risk for humans in urban areas, because of the larger density of population and emission sources. The exposure to diverse sources of air pollution can further increase public health risks. For urban environments, it is therefore important to be able to accurately and efficiently monitor the concentration of all air pollutants and their evolution over time, and to develop reliable models of personal exposure to these chemicals.

Personal exposure to pollutants is usually evaluated by low-frequency measurements (daily data), whereas population exposure is assessed by combining data of atmospheric pollution with population density maps. Atmospheric pollutant concentrations can be measured by a network of monitoring sensors or simulated by chemistry-transport models. However, depending on the network density or the model resolution, the distribution of air pollution in space and in time can be very different, and the conclusions about population exposure can therefore vary significantly. In addition, population density maps, which are typically generated on the basis of residency information, do not reflect population movement over time as residents pursue their daily activities. Making use of such information alongside pollution levels to estimate population exposure implicitly assumes that everybody lives outdoors, or in front of one’s door, as it were. In order to achieve more accurate and consistent estimates of exposure, it is therefore essential to develop high-frequency measurements (minute data) and procedures that account for population dynamics and allow one to discriminate between indoor and outdoor exposure.

To address these challenges, Fabian Lenartz and his colleagues have developed an approach that delivers a more fine-grained picture of everyday population pollutant exposure. In the framework of the OIE (Outdoor and Indoor Exposure) project (Lenartz, 2022), the Haute École de la Province de Liège (HEPL) team designed, on behalf of ISSeP, its own mini-station for air quality monitoring, named Antilope.

Antilope is a versatile device that can detect various types of pollutants, including NO, NO2, O3, and PM2.5, and meteorological parameters (temperature, relative humidity and pressure) thanks to the combination of several classes of detectors. Antilope can cover typical indoor and outdoor pollutant concentration ranges.

The PM2.5 sensor is based on the principle of light scattering, which allows one to determine the particle number concentration, their size, and their shape. For the gaseous pollutants – NO, NO2, and O3 – electrochemical sensors are used, which have a lower power consumption than metal oxide sensors and are more selective and stable. The working principle of these electrochemical gas sensors is an oxidation-reduction reaction occurring at the sensor electrodes, which produces a small electric current whose magnitude is proportional to the concentrations of the gas. The only disadvantages of electrochemical devices are their substantially reduced life expectancy (18 months, compared to more than ten years for metal oxide sensors), and higher cost.

The device carries out measurements and determines position at a one-second or faster rate. Its low weight (less than 500 grams), compact dimensions (approx 15 x 10 x 5cm) and relatively long battery life make it suitable for both stationary and itinerant applications. The measurements can be stored on a solid-state device (µSD card) for post-processing and analysis of the data collected. Overall, the cost of the device remains below €500, which makes it ideal for personal use (Lenartz et al, 2021).

‘With the rise of portable devices,’ explains Lenartz, ‘we are experiencing an unprecedented opportunity to measure pollutant concentrations in real time and at an incredibly high number of locations, allowing us to detect unsuspected hot spots and short-lived processes.’

Hazardous air pollutants, including NO, NO2, O3 and airborne particulate matter, pose a greater risk for those in urban areas.

Antilope has allowed the ISSeP Air Quality Unit to carry out mobile measurement campaigns to better assess outdoor and indoor personal exposure to air pollution (especially associated with traffic) in urban areas. In order to have a sufficiently large pool of subjects, the researchers sent out an open call for volunteers. The participants in these experiments carried the device for a full week and they were asked to complete a questionnaire about their environment and their habits in areas relevant to air quality issues. They were also required to keep a log of their activities and travel schedules, to help discriminate between indoor and outdoor pollution and account for their means of transportation. Exposure evaluation campaigns were carried out in Liège and Namur (Belgium). Some additional high time-resolution measurements were also carried out along specific tracks within these cities, to identify pollution hot spots (Lenartz et al, 2020).

Unsurprisingly, the participants spent most of their time inside, at home or at work, and in daily travel, with mean exposures to PM2.5 of 7, 4 and 6 μgm-3 respectively. The highest average exposures were measured during activities indoors: cooking (8 μgm-3), indoor sport (9 μgm-3) and other indoor leisure (10 μgm-3). It is also during these activities that the highest concentrations were recorded with 84 μgm-3 for indoor sport, 64 μgm-3 for cooking, and 55 μgm-3 while just being at home.

Regarding the means of transport, the time spent travelling by car or walking was the highest in the population sample, followed by bike, train, and bus. On average, pedestrians and bus commuters were exposed to 8 μgm-3, cyclists to 6 μgms-3 and train commuters and car drivers to 5 μgm-3. The lowest and highest maximum concentrations were respectively recorded for trains (14 μgm-3) and for buses (63 μgm-3).

Although not the subject of a European directive, nor a World Health Organization (WHO) recommendation, measuring BC (the product of incomplete combustion of fossil fuels or biomass) is a good indicator of traffic and heating intensity. The ISSeP mobile campaign highlights the high exposure to BC when leaving and picking up children from school (1.0 μgm-3 on average and a maximum of 6.6 μgm-3), ahead of travelling (0.8 μgm-3 and 4.2 μgm-3) and making a fire (0.7 μgm-3 and 4.7 μgm-3). As with PM2.5, people seem to be the most exposed to BC during bus trips (1.6 μgm-3, maximum of 7.7 μgm-3).

In tandem with these measurement campaigns, the team has developed a modelling framework to evaluate at the city-scale both atmospheric pollution and pollutant infiltration indoors. For outdoor air concentration, the model chain ATMO-Street (Lefebvre et al, 2013) was used, which combines the dispersal of pollutants from industry, shipping, and major road emissions with a specific model for dispersal in street canyons (ie, streets flanked by buildings on both sides, taller than the width of the street). This approach provides pollutant maps at a spatial resolution of ten metres and a temporal resolution of one hour. Indoor pollutant concentrations are derived from the outdoor concentrations and the mechanical characteristics of the building’s ventilation system, with a one-minute resolution via an infiltration model from Cenaero. This modelling framework supplies a continuous map of indoor and outdoor concentrations that can fill the gap of the measurement campaigns.

Even if the approach developed by Fabian Lenartz and his colleagues at ISSeP represents a substantial improvement over commonly used systems for assessing public exposure to air pollution in urban environments, work is still in progress to further enhance the accuracy of both the monitoring and the modelling components. The explicit inclusion of indoor pollutant sources and indoor chemical reactions, along with the replacement of a static population model with a dynamic one could further increase the reliability of the exposure calculation. The improvement of the power supply for air pollution measurements at fixed sites, the inclusion of metal oxide sensors, and sensors for the detection of nitrogen oxides in vehicle exhausts within Antilope are among the next steps towards more accurate, efficient and cost-effective methods for predicting pollutant exposure.

What are the most crucial innovations in the methods for air pollutant exposure assessment that you have developed relative to previous approaches?

We developed our own low-cost sensor system Antilope to avoid the opacity of some commercial equipment regarding data treatment, and to pay no more than €500 per unit without compromising performance. The call for candidates for the measurements made the study of population exposure at a city-scale possible. Our project was a first experience in citizen science for which participants only ‘passively’ performed measurements. Following these preliminary results, we would like to propose in the future a new project where participants will help us to design and carry out the campaign. 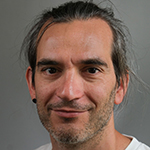 Fabian Lenartz has a masters degree in engineering and a postgraduate diploma in oceanography from the University of Liège. He has been working for more than ten years in the Air Quality Department of ISSeP, mostly on data treatment, modelling, and the development of low-cost solutions for air pollution assessment.

Fabian Lenartz and colleagues have developed the Antilope, a portable sensor system for monitoring air pollution.

Project carried out within the framework of the application of article 117 of the Program Law of August 8, 2003 (article 275, paragraph 3 of the Income Tax Code).