Earth & Environment
Deep-sea hydrothermal vents are one of the most hostile environments on Earth, and yet they support complex ecosystems. Dr Ryuhei Nakamura of the RIKEN Centre for Sustainable Resource Science and Earth-Life Science Institute, Tokyo Institute of Technology, has been researching how hydrothermal vents operate as a fuel cell for microbial life, their potential for deep-sea carbon capture through electrochemical carbon dioxide reduction, and how electric currents may have provided the spark for the origin of life on Earth.

We learn more about the Earth every day: how it was formed, how it functions as a system and what lies in the space beyond. Deep sea hydrothermal vents remain at the very frontiers of scientific exploration. They are challenging to study, found deep underwater on the sea floor, and yet they may hold the key to understanding how life may have begun on Earth.

Complex ecosystems thrive in these extreme, deep-sea hydrothermal vent environments. Dr Nakamura’s team hope to understand more about the unusual strategies microbial life uses to survive, especially how they harness energy from the environment around them.

Where hot meets cold
The floor of Earth’s oceans is not a smooth, solid surface but is covered in cracks, boundaries and hotspots. Hot water, rich in dissolved minerals from the crust can escape through these fissures as hydrothermal vents. There are around 500 known vent fields throughout the world’s oceans.

Deep under water with little or no sunlight, it might be surprising to think that there could be life here. However, there is not just life but a thriving ecosystem living around hydrothermal vents.

On the surface of Earth, plants form the base of our food chain. They are autotrophs, able to take energy from sunlight and carbon dioxide from the atmosphere, and convert it to the organic molecules (such as carbohydrates) that they need to survive and grow. This is the process of photosynthesis and all plants, from the largest trees right down to the smallest microbial algae, photosynthesise and produce food for other animals. The process of photosynthesis absorbs carbon dioxide from the atmosphere and so plants act as a huge carbon sink.

The floor of Earth’s oceans is not a smooth, solid surface but is covered in cracks, boundaries and hotspots.

Whilst the Sun is the primary source of energy for much life on Earth, deep sea organisms still thrive without it. Adapted to little or no sunlight and high water pressures, fish, eels, worms and crabs are just some of the marine animals that live around hydrothermal vents. Autotrophs form the vital base of this ecosystem, but they cannot photosynthesise to form organic nutrients. They must find an alternative source of energy to convert inorganic materials from their environment into organic compounds.

An electric discovery
In 2010, the team investigated hydrothermal vent materials. Hydrothermal vents form tall chimneys on the seafloor, reaching up to 50 metres high. Solid, sulphide-rich minerals such as pyrite precipitate from the hot hydrothermal fluid as it mixes with cold, oxygen-rich seawater. The hydrothermal fluid moves through the Earth’s crust, dissolving chemical compounds from the rocks and carrying them to the surface. The team were particularly interested in black smoker chimneys, found much deeper in the ocean.

Dr Nakamura and his colleagues were hoping to learn much from these hydrothermal vents. Not only were they interested in gathering more information about the microbiology that lives in this environment, they also hoped to prove another working hypothesis. They aimed to confirm that hydrothermal vents generate an electric current that acts as a source of energy, sustaining deep sea microbial life around it. This is the first time electricity had been considered important for supporting life in deep marine environments. 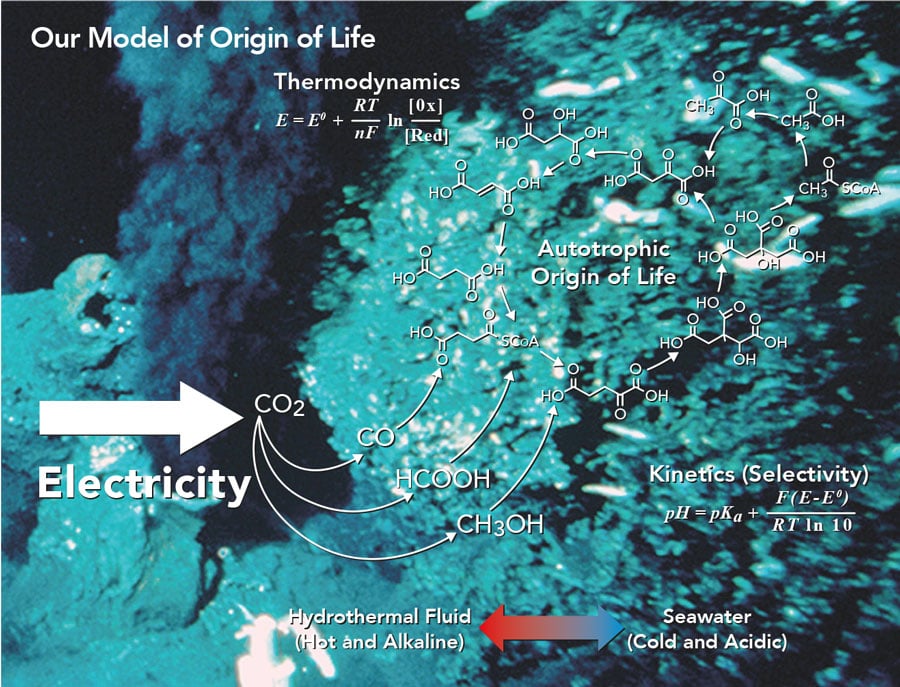 They collected samples from a black smoker chimney in the Mariner hydrothermal field in the South Pacific Ocean. They first test electrical conduction of collected samples from the outside, middle and inner walls of the chimney in the laboratory. The chimney was predominantly made of sulphide minerals with a very dense, interlocking microcrystalline structure, and showed excellent electron conduction like metal materials.

Then the team recreated similar conditions in their laboratory to the hydrothermal vents where the samples were collected. They connected each sample to a copper wire so they could measure the electric current flowing through it. The conditions inside the chimney are very extreme, with hot fluid that is very sulphide-rich moving upwards. They placed the inner chimney sample in a solution rich in sulphide to mimic this. They found that an anodic electric current was generated, where electrons flowed from the sulphide ions in solution into the sample. The loss of an electron from the sulphide ions is a process known as oxidisation, a reaction between the solution and the inner wall of  the chimney.

They immersed the outer wall sample in an oxygenated fluid similar to seawater. This time the sample generated a cathodic current, where electrons flowed from the chimney wall into the solution. Here, these extra electrons combined with the oxygen in the water in a reduction reaction to form water or hydrogen peroxide.

Dr Nakamura and his colleagues’ discoveries have paved the way for new scientific research into the electroautotrophic origin of life.

Current through a wall
Dr Nakamura and his colleagues had already found that a current could flow through the chimney wall, and now they had shown that an electric current is spontaneously generated by the oxidation and reduction action of the hydrothermal fluid within the chimney and surrounding seawater. Using chemical energy from beneath the crust, these hydrothermal vents could be used as an electrochemical fuel cell. Electrochemical fuel cells are different to batteries, as chemical energy from fuel is converted to electricity using an oxidising agent. For example, wood (fuel) burns more efficiently in high concentrations of oxygen (oxidising agent).

Electrochemical fuel cells are often used to power large objects, such as spacecraft and electric cars. Discovering that hydrothermal vents produce electrical energy provides scientists with new inspiration for designing alternative sources of sustainable energy. It also has some exciting possibilities for how early life may have formed on Earth billions of years ago and how carbon is captured in the deep ocean.

Even primitive, single-celled organisms are capable of harvesting sunlight as energy. However, on the early Earth, conditions on the surface were too hostile to support life in this way. It is likely that deep sea hydrothermal vents may have been host to the earliest origin of life. The slow transformation of molecules into the more complex organic compounds that eventually may have evolved into a cell is known as chemical evolution. Natural electron transport that creates an electric current could have triggered the production of organic compounds from prebiotic chemistry. Dr Nakamura’s work not only identifies the hydrothermal vents as a natural, inorganic source of energy through their potential to create electric currents, but that some of the bacteria here can use this source of energy to create organic molecules in a similar manner to plant cells on the Earth’s surface, simultaneously fixing carbon and other inorganic molecules from the environment around them. 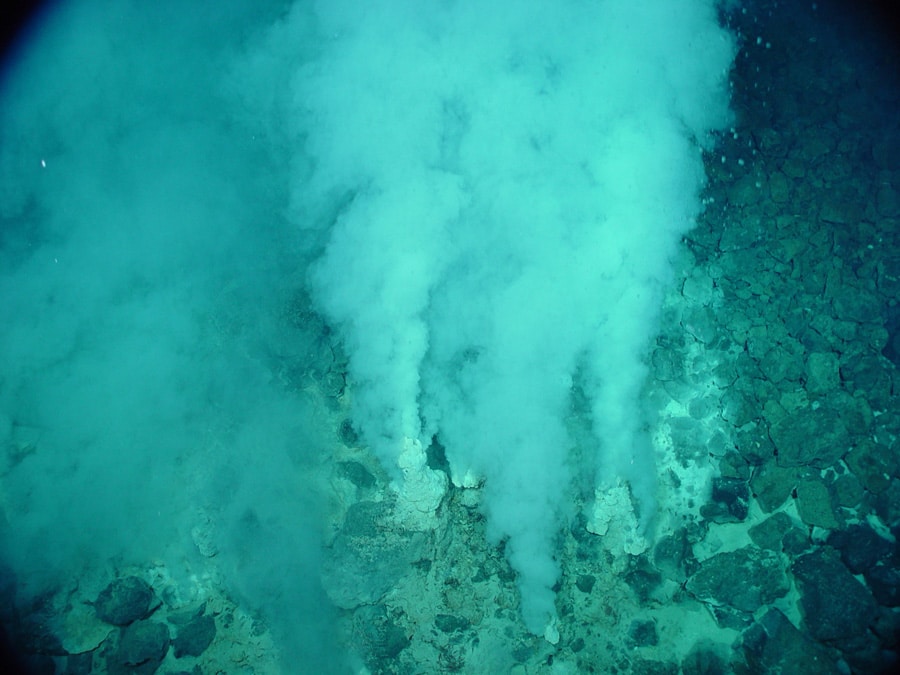 Sea floor electric currents
In 2015, Dr Nakamura and his colleague Dr Masahiro Yamamoto at Japan Agency for Marine-Earth Science and Technology had the opportunity to confirm their laboratory discoveries on an in-situ black smoker. They conducted electrochemical measurements around hydrothermal vents in the Okinawa trough, located in the East China Sea. Using a platinum probe, the two scientists were able to measure the redox potential (how readily molecules would accept an electron) around the black smokers. They observed electrical current generation at the vents and up to one hundred metres distant.

Dr Nakamura and his colleagues’ discoveries have paved the way for new scientific research into the electroautotrophic origin of life. Discovering that bacteria can access and use electricity rather than requiring chemical energy (either from the Sun or chemical energy discharged as hydrogen and sulphide-based chemicals from hydrothermal vents) creates new possibilities for how early life may have begun. The first life on Earth may not have used the Sun for carbon capture, but rather electrochemical energy from Earth’s interior.

The team’s work has also encouraged new research into electrochemistry and its connection to deep-sea ecosystems. The energy produced from hydrothermal vents appears to be a renewable and sustainable source of energy, and Dr Nakamura’s work has successfully recreated the process within a laboratory environment. There is now new inspiration for the use of minerals from the Earth’s crust as a source of renewable energy. The ability of microbes to access this energy source may also provide us with new technology opportunities, such as creating catalysts for electrochemical carbon dioxide reduction and providing thermo-electronic materials.

Finally, the discovery that primitive life can flourish based on electrical currents in extreme environments, as opposed to relying on sunlight, may change the way we look for life beyond Earth.

What do you think the greatest benefit of your research will be?
<> Our research may change the understanding of how life got started on Earth and provide new ideas to utilise electrical energy towards a future sustainable society. 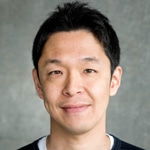 Ryuhei Nakamura studied electrochemistry at Osaka University and obtained his doctoral Degree in Science in 2005. Since then, he has worked at RIKEN CSRS and the Earth-Life Science Institute, Tokyo Institute of Technology. Dr Nakamura’s research is focused on bio-geological energy-conversion processes, with the aim of understanding how life emerged and to develop future technologies for a sustainable society.

Dr Nakamura’s team aims to understand the origin and evolution of biological and geological energy-conversion processes and utilise this knowledge as the blueprint to develop future sustainable energy production technology which is in harmony with nature.