Physical Sciences
Biological hydrides like NADH and folates were identified by early biochemists for their importance in fermentation and hydrogen transfer and are today some of the most thoroughly studied biomolecules. Dr Michael Denk, Professor of Chemistry at the University of Guelph, PhD candidate Nicholas Milutinovic and PhD candidate Katherine Marczenko have been performing research which has shown that these old biomolecules can still turn up new surprises. These molecules may have great potential to clean up persistent and damaging halogenated organic molecules like the notorious pesticide at the centre of the early environmental movement: DDT.

It’s hard to say which Alfred Nobel is more famous for: creating his eponymous Prizes, or inventing dynamite. Nobel’s objective with dynamite, at least originally, was to make safer the fiercely dangerous mining industry. It was inevitable that his various explosive inventions would also enable a vast number of deaths during war, and it’s hard to ignore that arms sales earned him much of his fortune.

When Alfred’s brother Ludvig died in 1888, the story goes that a French newspaper published an obituary for Alfred in error, titled “Le marchand de la mort est mort”: “The merchant of death is dead”, an event often cited as being the reason he dedicated almost all of his wealth to the prestigious Nobel Prizes.

In 1948, the Nobel Prize for Physiology or Medicine was awarded to Swiss chemist Paul Hermann Müller for his discovery of the insecticidal properties of DDT. This substance found widespread use, especially in the USA where it was used as both a commercial and household pesticide. DDT was notably used during and immediately after World War II to kill the insects which transmit malaria and typhus.

Over time, research emerged suggesting that the pesticide posed a risk to health, and after decades of campaigning initiated primarily by Rachel Carson, DDT was banned for agricultural use in the United States in 1972. Like Nobel’s dynamite, Müller’s Nobel-winning DDT saved and still does save lives – possibly even millions – but with unintended consequences.

‘Forever chemicals’
Despite heavy regulation, DDT and its metabolites persist in the environment. DDT is a halogenated organic molecule–a class of compounds which are often chemically inert, so they take a very long time to be broken down in the environment. DDT is either broken down by light or is ingested by organisms, where it can bioaccumulate, most notably by birds at the top of the food chain. Through eggshell thinning, DDT is thought to be responsible for the decline of bald eagles, brown pelicans, peregrine falcons, and ospreys.

Removing these molecules from the environment remains a challenge. One of the problems is that, whilst the metabolites of DDT are well-documented, the biological processes by which these metabolites are formed are still poorly understood even after decades of research interest.

Dehalogenation
The first step of metabolising DDT and other halogenated molecules is ‘dehalogenation’, a process found in all organisms studied to date. This process was first identified in yeast in 1963, and was later confirmed in mammals. In the chemistry lab, the same transformations are performed using organometallic reagents, the most commonly used being tin hydrides and hydrosilanes. These molecules are hydride donors, meaning they provide a source of negative hydrogen ions.

Dr Michael Denk, Professor of Chemistry at the University of Guelph, and PhD candidate Nicholas Milutinovic, began studying the interaction between halocarbons and biomolecules when they found that a class of small molecules called imidazolidines were unstable in the commonly-used halogenated solvent chloroform.

Closer examination showed that imidazolidines act as hydride donors, converting halocarbons to hydrocarbons. Continuing their investigations, Denk and Milutinovic confirmed that this new type of reaction is actually very general, able to dehalogenate a wide variety of halogenated hydrocarbons, including those with environmental and medicinal relevance. The dehalogenation is particularly effective for brominated halocarbons, including the inert flame retardant 1,3,5-tribromobenzene, proceeding within minutes at room temperature.

Whilst the metabolites of DDT are well-documented, the biochemical processes by which these metabolites are formed are still poorly understood.

The medicinal anaesthetic halothane (2-bromo-2-chloro-1,1,1-trifluoroethane), which has fluorine, chlorine, and bromine in its structure had its bromine atom selectively removed by the imidazolines.

Folates – the missing link in halocarbon metabolism?
At the very least, this unusual reactivity puts imidazolines forward as a candidate for the replacement of the toxic tin hydrides commonly used in selective debromination and dechlorination of molecules. But what makes this discovery really remarkable is that imidazolines are structurally identical to a section of the folate biomolecule 5,10-methylenetetrahydrofolate (MTHF). MTHF is a highly-studied and biologically ubiquitous hydride-donating biomolecule, involved in DNA methylation and the synthesis of DNA bases and amino acids in cells.

The discovery that imidazolines are able to perform these dehalogenation reactions, even in the presence of air or moisture, means these reactions are feasible in cellular conditions – as is the possibility that MTHF is responsible for the dehalogenation steps in metabolic degradation of halogenated organic molecules. Despite their simple chemical structure, imidazolidines are rare in nature, and the few molecules identified to date participate in very significant functions. Another imidazolidine biomolecule, methenyl-H4MPT, found in species of methanogenic archaea, is a hydrogenase coenzyme responsible for splitting molecular hydrogen – one of the strongest chemical bonds known. This fascinating reactivity has led Denk’s group to collaborate with McMaster University biochemist and hydrogenase expert Athanasios Paschos to unlock the full breadth of folate chemistry hidden in cells and test tubes alike. Prof Paschos is comparing the in vivo activity of his genetically engineered hydrogenases to that of the in vitro folate models in order to develop microbial approaches to halocarbon remediation and hydrogen generation.

Despite the volume of environmental and toxicological research done as a result of the concerns around DDT, little is known about how it is metabolised. Many biomolecules have been postulated to be responsible for dehalogenating DDT: cytochrome P450 enzymes, nicotinamide adenine dinucleotide phosphate (NADPH), and flavin adenine dinucleotide (FADH) have all been implicated over the past decades.

Effect of folate models on DDT
Despite its ubiquity as a biological hydride donor, MTHF has not previously been proposed as responsible for the dehalogenation metabolism of DDT, or any other halogenated organic molecules. With the knowledge that imidazolidines are capable of dehalogenating many other halogenated hydrocarbons, Denk and Milutinovic began investigating the effect on DDT of imidazolidines as model compounds for MTHF.

The action of the MTHF model on DDT was investigated using two protocols – one aerobic and one anaerobic. The same metabolites as seen in vivo under the same conditions were produced in these reactions, using multiple MTHF model compounds. Particularly interesting examples include the formation of the DDT metabolite DBP, which has up until now been postulated to be produced by cytochrome P450. Denk and Milutinovic’s observations show that DBP can be obtained from MTHF models under aerobic conditions without cytochrome P450.

Denk and Milutinovic’s findings are compelling evidence that MTHF is the biological agent involved in the metabolism of DDT and halocarbons in general.

Metabolic disruption
This newly identified role of MTHF in the breakdown of DDT and other halocarbons has interesting implications. When MTHF breaks down DDT in cells, it is itself depleted. That is good reason to believe that DDT is therefore capable of disrupting cellular pathways involving MTHF, which may explain why DDT is so damaging to insects and mammalian cells.

Denk and Milutinovic’s most recent research has expanded to biological hydride donors beyond MTHF. Of particular interest is NADH, the crucial biological agent converting sugar into alcohol and the first biological hydride transfer agent identified as such. Their research shows that NADH is also capable of generating most of the DDT metabolites seen in vitro, and so its role in the metabolising of DDT cannot be ruled out. In addition to carrying out chemical experiments, Denk’s research uses high precision quantum chemical calculations to predict the outcomes of the chemical reactions. The calculations reveal that the NADH carbon-hydrogen bond energy – an important factor in the way a hydride donor interacts with other molecules – is significantly lower than that of MTHF. The good news provided by the calculations is that all organohalides – fluorides, chlorides, bromides, and iodides – can in principle be converted to hydrocarbons; the bad news is that some halocarbons are reduced only very slowly. Speeding up these tardy reactions by catalysts is currently a focus of intense interest in the Denk group.

Future Application of folates
Halogenated hydrocarbons are toxic to human health, and the results from Denk’s lab are strong evidence that they also deplete folate levels in the body. Low folate levels are known to be a significant risk factor for cancer and birth defects. This has led Denk and Milutinovic to team up with medical researchers at Penn State University to explore how this information can be used to benefit human health. Penn State physician Robert Lennon is currently evaluating MTHF model compounds as topical reducing agents, to combat oxidative stress caused by reactive oxygen species generated by UV radiation and implicated in the development of skin cancers.

Evidence that DDT is broken down by folates also has promising implications for areas where DDT persists in the environment. The MTHF models are readily accessible and are capable of degrading a wide variety of halogenated compounds, in the presence of air and water, unlike many dehalogenation approaches – this gives them enormous potential to be used in the remediation of DDT waste sites.

The straightforward synthesis of the folate molecules studied allows the production of tailor-made analogues. One of the most promising candidates for remediation is a polymeric version, which is easier to recover from remediation sites and is even capable of capturing heavy metals and precious metals.

What would be the next steps in your remediation studies?

Reduction is a very general process. Do you foresee remediation beyond halocarbons?

What medical applications can you see?

Our colleague Robert Lennon, MD, at Penn State is particularly interested in evaluating MTHF model compounds as topical agents to fight oxidative stress from reactive oxygen species. These are commonly generated by UV radiation but also by environmental toxins. This approach may reduce carcinogenesis and also decrease the effects of ageing on the skin.

Discussions with our colleague Aiguo Ren from Peking University have given us yet another perspective, namely the potential use of MTHF and related molecules to lessen the risk of birth defects. Prof Ren has presented strong evidence linking halocarbons and DDT in particular to neural tube defects. As there is no method to remove the highly lipophilic halocarbon insecticides from living organisms, fighting their detrimental effects at the molecular level seems promising. 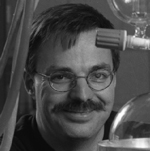 Michael Denk was born in 1961 in Munich, Germany. He obtained his MSc from the Ludwig Maximilian University and PhD from the Technical University of Munich, and was a Humboldt fellow at the University of Wisconsin-Madison where he synthesised the first stable silylene molecule. He has conducted a scientific expedition to India and has travelled to Tibet, China, India, Japan, North Yemen, Sudan, and Algeria, among other places. His interests include classical music, archaeology, and languages.