A cough can significantly impact our quality of life, disrupting sleep and daily activities. Coughing is usually a symptom of benign viral infections – but sometimes a cough can linger long after the infection has cleared and persist for months. There is a need for new treatments to alleviate lingering coughs. Professor Edward T Wei at the University of California, Berkeley, USA, investigates new cooling agents that soothe body surfaces. Wei’s research uses Cryosim drops to alleviate coughing. By controlling the urge to cough, his treatment also has the potential to enhance mucus clearance. This would be a new mechanism for treating inflammatory lung diseases.

We’ve all experienced coughing, but what exactly is a cough? Mechanically, the cough is a three step process, beginning with air sucked in, before being compressed, and then suddenly released with the cough sound. Coughing is a protective reflex intended to remove obstructions in the airway. When a cough is called ‘wet’ or ‘productive’, the airway is obstructed by phlegm. Phlegm is a mixture of mucus, secretions, and exudates, and when phlegm is spat out, it is called sputum.

The stimuli for coughs are mainly transmitted via the 9th and 10th cranial nerves. The 9th nerve in the throat carries irritant signals such as smoke and allergens, and the 10th carries signals from the accumulated phlegm. Unfortunately, the history of cough research has been a series of failures in finding new medications. However, Professor Edward T Wei at the University of California, Berkeley, is optimistic that his Cryosim drops have the potential to revolutionise the way we treat cough.

Cryosims can be easily formulated into different delivery systems to treat various affected surfaces in the body.

Cool esthesia: soothing discomfort
Herbal remedies containing menthol were used over a thousand years ago to ease symptoms of throat discomfort. The menthol lozenge that we see in supermarkets today was introduced over 90 years ago by the Halls unit of Cadbury in the UK. But how do they work? Lozenges, or hard candy cough drops, contain menthol that dissolves in saliva and cools the throat lining. The cooling sensation is similar to physical cooling, traditionally used to relieve discomfort and dysesthesia (abnormal sensation) caused by injury to the body’s surfaces. However, until twenty years ago, no one knew how cooling worked. The mechanism for cooling was revealed when the transient receptor potential channel subfamily M (melastatin) member 8 (TRPM8) was discovered. TRPM8 channels are essential parts of the neuronal circuitry for cooling. As Wei has written, ‘Finding the right TRPM8 agonist and getting it to the right place at the right time is like turning on a mini-air conditioner to relieve discomfort’.

TRPM8 sits on membranes, and activation of these receptors with chemicals mimics physical cooling at 4 to 25oC. TRPM8 cooling is a modality-specific event that has its own nerve circuit. TRPM8 receptors are found on many body surfaces, including the skin, throat lining, nose, and eyes. Cooling and cold relieve discomfort, and Wei calls this relief of dysesthesia ‘cool esthesia’ and cooling TRPM8 agonists as ‘cool esthetics’.

Cool esthesia relies on an agonist drug action. An agonist is a chemical that activates a receptor to produce a biological response. A topical agonist for the TRPM8 receptors applied to the site of discomfort has a rapid onset of action, like ice or a cold towel, providing immediate relief, and it can be used when needed. By contrast, antagonists are medications that block the receptors from agonists. Antagonists require a constant drug level at the receptors and drug delivery via the bloodstream to be effective, so the onset of relief is slower.

Cryosims drops
After screening many cooling agents, Wei found a new class of molecules which he called Cryosims. Cryosims are TRPM8 water-soluble agonists that can be applied with a dispenser (Figure 1) to the neuronal receptive field of the 9th nerve in the throat. The target area is less than one cm2 or 5–10% of the total surface of the oral cavity, and the volume of delivery is ≤ 0.5mL. The drops initiate a cool sensation that controls the urge to cough and can be used on an as-needed basis. For example, if coughing is triggered by smoke or perfume, the drops will work right away to stop the cough. In addition, the drops are effective at night when a coughing fit wakes up a subject. Then, the drops allow the subject to return to comfortable sleep.

TRPM8 agonists are medications that activate the receptors for cold, preventing a response to irritating stimuli.

An intriguing new idea is that the Cryosim drops can help people learn how to control the urge to cough. This control can then be used to manage the expectoration of phlegm, the gunk produced in inflamed airways. Mucus hypersecretion and phlegm are significant contributors to tissue damage in inflammatory lung diseases, and therefore an agent that helps clear mucus will reduce disease progression. By using the Cryosim drops, the subject can be taught to develop an ‘efficient’ cough; the subject learns to sense the build-up of phlegm and time its accumulation, and then cough it all out in one big cough. The Cryosim drops can suppress the intermittent dry inefficient coughs and save the patient’s energy for the efficient cough.

Cool esthetics
Surprisingly, despite the prevalence of coughs, there aren’t many therapies to control coughing, so a drug acting as a cool esthetic which is better than menthol offers a promising strategy. But, as in many active research fields, there is confusion about dealing with the drug target. So there are also ideas for using TRPM8 antagonists to treat chronic cough instead of agonists, as cold air induces asthma coughs. The idea of cool esthetics has also been extended by Wei for treating skin itch and dry eye disease, and its efficacy for this has been shown in clinical trials. The use of Cryosim-drops for alleviating cough and clearing the airway of phlegm still awaits well-designed clinical trials.

What are your future plans for further clinical studies or trials involving Cryosims treatments?

Progress was made ~2.5 years ago when we found a dispenser that delivers drops to the back of the throat, at the base of the tongue. This dispenser facilitated structure-activity studies and was used for finding the suitable dose range for efficacy. But drug development is an expensive process, and at that time cough monitors for human subjects were costly. With the COVID-19 pandemic, new smartphone apps are now available for cough monitoring. Virtual studies are possible, and we are seeking funding for evaluating the Cryosim drops. The advantage of the drops is the rapid onset of action, which is patient-friendly. The efficacy is self-evident, and the drops speak for themselves. We welcome collaboration. 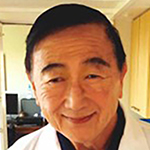 Professor Edward T Wei is a retired faculty member at Berkeley. Previously, he was a Fogarty Fellow at Wellcome Research Laboratories. Wei is an expert on cooling agents and characterised the potent icilin, WS-12, and Ax-8 molecules. He synthesised the Cryosim used in the cough studies.