Health & Medicine
Many aspects of the healthcare system have changed as a result of the COVID-19 pandemic, including the response to cardiac arrests both outside and within hospitals. Early recognition of cardiopulmonary arrest, early defibrillation when indicated, and early advanced life support (ALS) are some of the common practices that fall under in-hospital resuscitation. John A. Stewart, an independent researcher and retired nurse, has highlighted the importance of early defibrillation during the COVID-19 pandemic. He has also emphasised the need to develop a training programme for caregivers in hospital in order to perform early defibrillation.

The process of correcting the physiological conditions of lack of breathing or heartbeat is referred to as resuscitation. Early recognition of cardiopulmonary arrest, early activation of trained responders, early “basic” cardiopulmonary resuscitation (CPR), early defibrillation when indicated, and early advanced life support (ALS) are some of the common practices that fall under in-hospital resuscitation. Defibrillation is the emergency treatment for life-threatening tachyarrhythmias (rapid heartbeats), i.e., ventricular fibrillation and pulseless ventricular tachycardia. Ventricular fibrillation (VF) is a life-threatening condition in which the lower chambers of the heart contract in a rapid and uncoordinated manner. Ventricular tachycardia (VT) is a heart rhythm disorder caused by abnormality in the electrical signals in the lower chambers (ventricles) of the heart.

Pre-COVID-19 vs post-COVID-19
Many aspects of the healthcare system have changed as a result of the COVID-19 pandemic, including the response to cardiac arrests both outside and within hospitals. The risk of COVID-19 infection spreading to caregivers is a major concern, and personal protective equipment (PPE) is utilised to provide safety to caregivers. Droplet and contact isolation of suspected COVID-19 patients are the most basic safeguards in hospitals, with additional airborne precautions recommended for aerosol-generating procedures (AGPs). As a result of these measures, emergency treatment will often be delayed.

The recently revised (June 2020) guidelines of the International Liaison Committee on Cardiopulmonary Resuscitation (ILCOR) follow these PPE guidelines while also identifying defibrillation as unlikely to generate aerosols. Consequently, they recommend that hospitals should “consider attempting defibrillation for patients with tachyarrhythmic arrests before wearing personal protective equipment (PPE) for aerosol-generating procedures” and starting chest compressions. This is similar to a strategy developed in 2003, in response to the severe acute respiratory syndrome coronavirus (SARS-CoV) crisis. It is a shift from the previous objective of initiating chest compressions and monitoring/defibrillation at the same time (which is rarely achieved in practice).

One in every three or four nurses or other caregivers should be rigorously trained for one specific job in every code: to provide immediate monitoring and defibrillation.

There were solid reasons to focus attention and resources on fast defibrillation well before the occurrence of the COVID-19 pandemic. Defibrillation is often viewed as just one of the many ALS treatment options, yet it is the only reliably effective treatment for any type of cardiac arrest, and its success rate drops dramatically within minutes. American Heart Association and ILCOR resuscitation leaders recognised the problem of delayed defibrillation in hospitals 20 years ago and began supporting automated defibrillation, and hospitals have widely adopted dual-mode (automated and manual) defibrillators as a result of that endorsement. After that strategy failed to increase survival (no improvement for tachyarrhythmic arrests, decreased survival for other arrhythmias), interest in the issue declined.

The researcher’s view
John A. Stewart, an independent researcher and retired registered nurse, holds strong views with respect to the practice of defibrillation in hospital settings. According to Stewart, resuscitation standards must change in the context of the COVID-19 pandemic; however, defibrillation delivery need not be compromised and should even be improved by focused defibrillation training.

ILCOR’s revised defibrillation recommendation is based on the recognition that defibrillation success is clearly time dependent and putting on full PPE causes treatment delays. Since defibrillation does not produce significant aerosols (i.e., is not an AGP), there is no need to delay it by wearing full PPE. Instead, one person should put on a mask, bring the monitor/defibrillator into the room, start bedside cardiac monitoring, and defibrillate if needed, while others are putting on their PPE.

This method can potentially complicate resuscitation efforts. If several caregivers arrive on the scene at the same time, as is often the case, the caregiver assigned to enter the isolation room first should be willing to execute the role as well as have prior training. It is probable that assigning the role on the spot will cause a large delay. One option would be to pre-assign resuscitation team roles, but there would be no way to ensure that the person designated to defibrillate would arrive at the scene promptly. Furthermore, defibrillation can be daunting for several reasons, including the sudden call to perform in a life-or-death situation, and the fear (largely unwarranted) of injury to oneself, the patient, or others on the scene. Such delays have been reported frequently in clinical simulations. Other reasons such as the expectation of entering the room and performing the process alone, without complete PPE, can make it challenging and can elevate the fear.

This calls for another approach, especially during the ongoing COVID-19 pandemic. One in every three or four nurses or other caregivers should be rigorously trained for one specific job in every resuscitation attempt: to provide immediate monitoring and defibrillation. In the event of a COVID-19 arrest, they would be the first to enter the room, while the other caregivers put on their full PPE. They might defibrillate if needed, saving precious time, and then withdraw as others arrive, either to put on their own PPE and re-join the team or to resume their previous duties. If defibrillation is successful, the code time will most likely be reduced, lowering the risk of COVID-19 transmission to caregivers while simultaneously increasing the patient’s chances of survival.

Defibrillation training programme
Since the introduction of basic CPR and defibrillation, survival from in-hospital cardiac arrest has not improved. Survival rates on general units are lower than in critical-care facilities, with rates hovering around 18% at best. Organising and delivering the complete range of advanced cardiovascular life support (ALS) therapies with code teams is a costly and difficult task that has little bearing on outcomes, because survival for presenting rhythms other than VF and pulseless VT – the majority of arrests – is poor both outside and inside the hospital.

A programme that aims at saving lives would be very different. It would concentrate money on therapies that have been demonstrated to work (mainly early defibrillation), up to the point of clearly diminishing returns. A more effective strategy for in-hospital defibrillation is needed to enhance survival from in-hospital arrests.

The strong emotional appeal of defibrillation – the real possibility of restoring a patient’s life swiftly, cleanly, and dramatically – can entice volunteers.

Stewart also considers the affective aspects of defibrillation training, suggesting that it is best to choose a group of people who are extremely motivated and dedicated. The basic procedure of defibrillation is both safe and easy, but participants in an in-hospital defibrillation programme must commit to intensive training and sustain proficiency for lengthy periods of time without actually employing the skill. When called upon, they will also be expected to perform quickly and successfully under extremely stressful circumstances. However, this amount of personal commitment cannot be and indeed should not be expected of all nurses. Relying primarily on volunteers can boost the likelihood of training success. The strong emotional appeal of defibrillation – the real possibility of restoring a patient’s life swiftly, cleanly, and dramatically – can entice volunteers. It can also serve as a powerful source of motivation during training.

Stewart recommends a study to check the effectiveness of these training programmes. A prospective, controlled study could be carried out by recruiting trainees and achieving randomisation across shifts and units so that any given unit was staffed with a trained nurse around half of the time. The primary outcome would be mean time to first defibrillation. If mean time to defibrillation was lowered in the experimental group, that in itself would be persuasive evidence of success, since survival is so closely linked to time. This would require a method of capturing much more accurate time-interval data than is currently seen in the medical literature, but this is entirely feasible (and long overdue). Of course, short-term and long-term survival could be compared in a longer and/or larger study. Due to early monitoring – before degeneration to asystole (flatline) – the proportion of effective defibrillations should rise, as should the number of shockable rhythms.

Conclusion
Stewart has outlined several important points through his work. A nurse-led programme focusing on early defibrillation can be relatively simple to establish and cost-effective, potentially saving many lives. His work highlights how caregivers would not be exposed to significant risks, at the same time giving patients experiencing tachyarrhythmic arrests their best chance of survival. If adopted, his suggestions might significantly increase the survival rate of patients suffering tachyarrhythmic arrests, during this pandemic and beyond.

Do you feel optimistic that a defibrillation training programme such as the one you outline could be widely implemented in the near future?

<>I’ve been advocating this for many years. The pandemic and the resulting revision of the ILCOR Guidelines have served to highlight the longstanding problem of delayed defibrillation in hospitals, so maybe there will be more interest now. Let’s say that I’m cautiously optimistic.

Why have you not been able to conduct a training programme/study along the lines that you advocate?

<>One reason may be that, after bringing the problem of delayed in-hospital defibrillation to the attention of American Heart Association officials, I publicly disagreed with their subsequent push for automated defibrillation technology in hospitals. 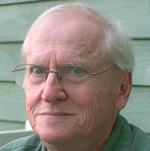 Mr. Stewart is a retired registered nurse living in Seattle, Washington, USA; his professional experience has mainly been at the bedside in hospitals. He has long been interested in in-hospital resuscitation issues and has published extensively in the subject area.

John A. Stewart highlights the importance of early defibrillation in in-hospital resuscitation.