Health & Medicine
Glaucoma is linked to a build up of pressure in the eye as a result of impaired aqueous humour fluid outflow. However, there are limited options to evaluate aqueous outflow systems. Patrick Gooi, University of Calgary and Gavin Docherty, of the University of British Columbia, Canada, have developed a technique known as trypan blue venography, allowing simultaneous surgical intervention and mapping of a patient’s aqueous outflow structures. Providing crucial information on the condition of the outflow system could help identify the optimal surgery for a glaucoma patient. A greater understanding of the aqueous outflow system may also assist in the development of new glaucoma surgeries and therapeutics.

Glaucoma is the leading cause of irreversible blindless worldwide. This disabling eye disease is estimated to affect 60.5 million people worldwide, a figure that is set to reach 110 million by 2040. Vision loss in most forms of glaucoma is related to a build up of pressure in the eye, known as intraocular pressure (IOP). This occurs due to an imbalance in the production and drainage of aqueous humour, a clear watery fluid that fills the space between the cornea and lens (anterior chamber) and the iris and lens (posterior chamber). Aqueous humour nourishes the cornea and lens and gives the eye its shape.

The eye’s drainage system and IOP
In a healthy eye, aqueous humour is continuously produced by a structure called the ciliary body; it drains out at an equal rate, mostly via the trabecular meshwork and then through a structure known as Schlemm’s canal. Once in the Schlemm’s canal, the aqueous humour flows to collector channels that drain into the venous system and eventually back into the body’s circulatory system. Variations in the production or drainage of aqueous humour can lead to significant changes in IOP. When IOP is increased, as in most forms of glaucoma, it can cause permanent damage to the optic nerve, either directly or indirectly by restricting blood flow.

Trabeculectomy has been considered the gold standard for the surgical treatment of glaucoma worldwide for almost 50 years. This procedure reduces IOP by creating a new channel through which aqueous humour can drain out of the eye. Despite being the most common surgical method for managing glaucoma, trabeculectomy is an invasive procedure and carries a significant risk of complications. Consequently, there has been much interest in new surgical techniques designed to lower IOP in a less invasive fashion, termed minimally invasive glaucoma surgery (MIGS). One of these is canaloplasty: a highly effective, minimally invasive, surgical technique which aims to relieve pressure by restoring the function of the eye’s aqueous outflow system (the trabecular meshwork, Schlemm canal and collector channels).

A greater understanding of the aqueous outflow system may assist in the development of new glaucoma surgeries and therapeutics.

Canaloplasty: Lowering eye pressure
There are two approaches to performing canaloplasty: ab externo and ab interno. In the traditional, ab externo, approach, the surgeon creates a partial-thickness scleral flap allowing a microcatheter to be inserted into Schlemm’s canal, the eye’s drainage system. A viscoelastic fluid is then administered through the microcatheter to widen the canal throughout its full length. The canal is kept adequately dilated using a tight intraluminal suture. Ab interno canaloplasty is a more efficient, simplified surgical approach. Using gonioscopy, the surgeon accesses Schlemm’s canal through a small goniotomy (a small cut through the first layer of the natural drain system, the trabecular meshwork). The benefit of this approach is that no tensioning suture is needed to maintain the reduction in IOP, and the conjunctiva is preserved, which is important when managing glaucoma (allowing for future conjunctival surgery to further control ocular pressure and prevent further vision loss, if needed).

Introducing trypan blue aqueous venography
Currently, there are limited ways to assess the openness of the eye’s aqueous outflow systems, especially during a glaucoma procedure. It should be possible to visualize the status of the aqueous outflow system during canaloplasty when Schlemm’s canal is pressurized with a viscoelastic fluid, as this fluid is also distributed through functioning collector channels. However, until now there has been no way to easily visualize the viscoelastic fluid.

Gavin Docherty, Patrick Gooi, and their team at the University of Calgary have recently found a solution to this problem. Their pioneering technique uses a common dye: trypan blue. The blue dye is mixed with the standard viscoelastic fluid before it is injected into Schlemm’s canal. This means the aqueous outflow structures can be clearly seen during ab-interno canaloplasty without the need for specialized tracers or infrared video recording equipment, providing valuable information on which surgeons can base treatment choices.

To test their new approach, the team performed this procedure on four patients, with 2–14 months of follow up, at the Southern Alberta Eye Care Centre, Calgary, Canada. The procedure involved mixing trypan blue with an ophthalmic viscosurgical device (OVD). A small (1.2mm) incision was made to allow delivery of the microcatheter, and the anterior chamber of the eye was filled with a super cohesive OVD to create stability and prevent reflux of blood and the trypan blue mixture into the anterior chamber. Using gonioscopy, a small goniotomy was created in the trabecular meshwork (the drainage network in the anterior chamber). The viscoelastic and trypan blue mixture was injected into Schlemm’s canal, revealing the venographic pattern of the entire outflow system. This technique does not require additional or expensive surgical microscopes as trypan blue can easily be seen without a fluorescence filter. 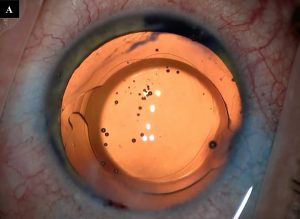 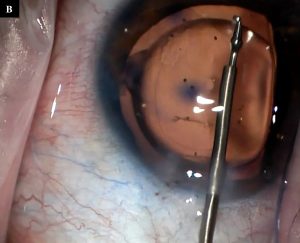 Patient-specific surgical approaches
All procedures were found to be complication free. Post-operatively, IOP was lowered by 25% and there was a 43% reduction in the number of topical medications that patients needed. While not statistically significant, this is still clinically relevant as it shows the procedure was successful at reducing IOP with less medication required post operatively.

A greater understanding of the aqueous outflow system may assist in the development of new glaucoma surgeries and therapeutics.

Notably, trypan blue venography provided crucial information about the condition of the aqueous outflow system, which the team believes may help to identify the optimal approach for a particular patient during glaucoma surgery.

Several patterns of flow were observed following injection of the OVD-trypan mixture. In patients with more advanced disease, minimal trypan blue staining was observed suggesting the outflow system may already be damaged beyond repair; this knowledge enables the surgeon to determine whether these patients may benefit more from an alternative procedure such as a gel stent, tube, or trabeculectomy. A number of patients showed a reticular pattern, in which trypan blue staining was found in some areas in a limited fashion. A third group were found to show diffuse staining which was suggested to be a favourable prognostic indicator. Finally, some patients showed diffuse staining not just in the vessels but also within the sclera, the white of the eye – which the team called ‘blue blush’ – potentially indicating both intra-scleral and episcleral flow. This ‘blue blush’ may be a promising indication that the existing outflow system can be enhanced. The research team highlight that as this is a surgical intervention, their findings may not reflect normal anatomy or physiology; instead it may provide information relating to the impact of surgical intervention on the aqueous outflow system.

Surgical benefits
Gavin Docherty, Patrick Gooi and their colleagues have described a new technique: trypan blue venography that allows therapeutic intervention as well as evaluation of a patient’s aqueous outflow system. Their method can be combined with surgical techniques to treat high pressure both at the eye’s natural drainage system, the trabecular meshwork, or further downstream at the post-trabecular outflow system. This versatile procedure may be performed with or without cataract surgery, and can be tailored to the particular patient.

This new ability to ‘see’ the eye’s drainage network enables surgeons to make much better informed treatment choices than was previously possible. This technique can also help to increase our understanding of the outflow system in general which may assist in the development of new glaucoma surgeries and therapeutics. The next stage of research should aim to identify and evaluate the aqueous outflow system pre-operatively, which could help identify the optimal approach for a patient’s level of glaucoma before any intervention is made.

Might the different patterns of staining seen in patients offer clues about the type of glaucoma they have?
<>
I think the pattern of staining is more a reflection of the outflow system and its functional status and does not necessarily reflect the type of glaucoma. Almost all types of glaucoma essentially reflect an inability of the eye to drain fluid properly or in some cases the optic nerve may be particularly susceptible to damage from elevated intraocular pressure. The reason why this happens is poorly understood. In an ideal world we would have a way to image the aqueous out flow system preoperatively and in a non-invasive fashion. This would allow us to determine if canaloplasty can help improve or restore function for these patients or if they would benefit from proceeding directly to a surgery that bypasses the collector channels such as trabeculectomy or glaucoma drainage device.

What is next for your research?
<>
This topic needs further research to verify the findings. Additionally, it would be useful to use this research as a platform to develop non-invasive imaging techniques for the aqueous outflow system. 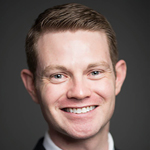 Gavin Docherty’s research focuses on the diagnosis and treatment of glaucoma, specialising in retinal imaging and epidemiology.