Engineering & Technology
Climate change, and humanitarian issues such as the movement of refugees can create challenges for crisis management and emergency response, particularly in developing countries. Dr Mayank Kejriwal, based at the University of Southern California is passionate about applying Artificial Intelligence (AI) to social problems. He is working with colleagues to develop tools that extract critical data sent via social media channels such as Twitter. Whilst tweets frequently contain non-critical information, at times of crisis the data shared by those caught up in an emerging incident can inform emergency services and humanitarian aid, providing clues about where to focus rescue efforts.

According to the UN Office for the Coordination of Human Affairs, in 2016 over 100 million people were affected by natural disasters including earthquakes, hurricanes and floods, and over 60 million people were displaced due to conflict. Additionally, the United Nations reports that there is a 20 billion dollar shortfall in addressing humanitarian problems. In response to this problem, low cost, innovative methods of providing emergency help are crucial in saving lives and managing the human suffering that is a frequent outcome of natural disasters. Situational awareness is a key response tool during a crisis, this gives first responders tactical intelligence during and in the immediate aftermath of events such as the Nepal earthquake of 2015. Technology has a vital role to play in providing the appropriate situational awareness that then shapes practical, life-saving decisions for effective crisis management. These decisions may involve the evacuation of the most dangerous areas after an earthquake, or explore tactical options about how and where to position critical resources like medicine, food, clean water and shelter. Through utilising the data tweeted and texted by citizens in a crisis zone, rescuers have access to the knowledge needed to devise a strategy for immediate rescue attempts and for longer term help.

Technology has a vital role to play in providing the appropriate situational awareness that then shapes practical, life-saving decisions for effective crisis management.

Issues can arise, however, due to the volume of available data, and high-quality filtering systems are needed to avoid using inaccurate data that could misdirect humanitarian aid, potentially wasting time, resources, and human trust in the system. Humanitarian responders may, understandably, question the specificity of information, therefore, building their trust and encouraging uptake of AI technology is a socially meaningful endeavour; without this, a system is unlikely to be adopted in the field. Machine learning, understood as the refinement of how AI ‘learns’ to use algorithms and other data, offers a solution to detecting key information taken from social media messages. Hence, researchers are focusing efforts on improving how the millions of messages are sifted by algorithms to overcome inaccuracy, ensuring that only the most important data is identified and shared.

The Thor Project
Dr Mayank Kejriwal at the University of Southern California is a key researcher on the THOR (Text-enabled Humanitarian Operations in Real-time) project, funded under DARPA’s LORELEI program. The aim of the LORELEI (Low Resource Languages for Emergent Incidents) project is to develop capabilities for low resource languages that are less common; human language technology is mostly designed for commonly spoken languages such as English. The focus of the project is to provide tactical insights through identifying key elements of language sent from commonly used personal devices such as mobile phones. Vital data is extracted from messages sent on social media channels, with priority given to the most urgent intelligence that identifies key signals based on events, locations, topics and names. This real-time information helps first responders make rapid decisions such as moving people from buildings at risk of collapse. The system ensures that limited on-the-ground cognitive and physical resources are optimised to manage risk and danger.

THOR is a LORELEI situation awareness system that has been developed in collaboration with research partners at Next Century Corporation and it uses open-source technology, utilising data from social media, and from other externally developed AI systems, and translating the data into English. Tweets and text messaging offers a ready supply of data information during a crisis, and interdisciplinary AI research is providing a platform for information extraction that can detect and resolve urgent situations using this information. Twitter is one such social media platform that acts as an important channel for crisis informatics due to the availability of the published data and its real-time application. During a humanitarian crisis many individuals with access to a phone will send messages relating to their current predicament, reporting on matters of immediate concern to their well-being. Some messages will be irrelevant, even though they have a relevant hashtag (a keyword or subject label) the body of the message may lack data directly applying to the event, other tweets may be relevant but have unusual spellings, or use idioms. Identifying and sorting through the ‘corpus’ or body of data in real-time is necessary for the rapid deployment of support. Clearly, this would be an impossible task for humans to complete without significant help, and this is where technological advances offer a neat solution. Key ‘signals’ or data relating to locations and individual’s names are extracted using algorithms that can then direct resources to casualties and responders. Importantly, these messages can be grouped according to urgency, with help then targeted to the areas in most immediate need.

Freely available data sent over social media channels can help inform humanitarian efforts, bringing help
to those most in need before there is further damage or loss of life.

SAVIZ: Situational awareness
SAVIZ (situational awareness, visualisation, embeddings, crisis informatics), acts as an interactive visualisation platform that sorts through and displays the data that has been gathered together and sifted. SAVIZ has been designed to work with short, crisis-specific messages to ensure humanitarian aid is effectively deployed. Visualisation is an important component in a crisis informatics system, helping responders make sense of large amounts of information. THOR creates a user-friendly platform for situational awareness that can work with low-resource languages like Uighyur, a Turkic language, and Bengali which is primarily used in South Asia. Situational awareness helps direct limited resources to the most important sites, translating messages when needed and providing an overview of what is happening on the ground after a natural disaster. SAVIZ is a versatile platform, for example it is backward-compatible meaning that it can be used with pre-existing crisis intelligence platforms, and it can be utilised by non-technical first responders using an ordinary web browser. A brief demonstration of the system for potential users takes 1-3 minutes, and an accompanying video illustrates the system’s key features.

Long-lasting social impacts
As the system becomes further developed and embedded it has the potential for long-lasting social impact using readily available data sent from mobile phones and similar devices, gathering information in a way that was not previously possible. Dr Kejriwal and colleagues are also applying the technology to support law enforcement in the fight against human trafficking. Whilst traffickers seek to hide data through tactics such as using emojis and misspellings in sex advertisements, AI is being developed to stay one step ahead of this illicit activity through extracting information on phone numbers and locations. The use of time-sensitive social media data can assist crisis management during mass shootings, fires, large-scale accidents and epidemics such as the Ebola crisis, guiding assistance to casualties and flagging the presence of danger. Data can also help authorities to diffuse conspiracy theories and malicious rumours, as was evidenced in the aftermath of the Las Vegas shootings of October 2017.
The work being done by Dr Kejriwal and colleagues offers rapid solutions to critical global concerns. Freely available data sent over social media channels can help inform humanitarian efforts, bringing help to those most in need before there is further damage or loss of life. As the research moves forward, new information networks and channels can be drawn on to further develop this lightweight, portable system for data sorting that places control in the hands of those in a position to provide immediate help.

What do you see as being the most important future developments in Artificial Intelligence and how will these assist crisis management and humanitarian aid.
<> Recently, there have been many advancements in Natural Language Processing (NLP), including question and answering systems that can respond in an almost human-like fashion. However, these advancements have primarily been in English. With programs like DARPA LORELEI that funded my research, as well as several other groups, we are starting to see NLP-based AI systems for other languages catch up. Having accurate AI tools for non-English languages is obviously very important in the humanitarian domain, and these programs bode an exciting future for these tools. I think they will prove vital in helping make our world a better place. 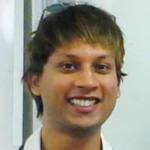 Dr Mayank Kejriwal is research faculty at the University of Southern California, with a passion for applying Artificial Intelligence to social problems such as human trafficking. His work has been featured in international academic and industrial venues. He is the author of an upcoming textbook on knowledge graphs (MIT Press).

We gratefully acknowledge the ongoing support and funding of the DARPA LORELEI program, and the aid of our partner collaborators and users in providing detailed analysis. The views and conclusions contained herein are those of the authors and should not be interpreted as necessarily representing the official policies or endorsements, either expressed or implied, of DARPA, AFRL, or the U.S. Government.

We are extremely grateful to Next Century Corporation for engaging us in the THOR project. Next Century has been providing us with the data that we use in our research, and they have been largely responsible for engineering (and exploring the transition of) the Graphical User Interface that is used to showcase our research and algorithms.