Physical Sciences
Dr Hugo Christenson is a Reader in the Molecular and Nanoscale Physics Group at the University of Leeds. His present research interests lie in crystallisation – an important process across multiple areas of science. Specifically, Dr Christenson’s work provides in-depth insight into why crystals first form in topographical defects, like cracks and crevices.

Have you ever sat on a park bench on a frosty cold morning? Did you notice that the ice crystals seem to form first on the chipped parts of the surface? Did you wonder why? The answer to this observation has been the topic of extensive scientific research. Ice is the crystallised form of water and crystallisation is an important process in nature and industry. It is an intricate part of subjects as wide-ranging as geology, meteorology, materials science and medicine and many technological advances apply crystallisation processes. Understanding this naturally occurring phenomenon allows better control of the process and more efficient uses of its end product. The fundamentals of crystallisation and the environmental conditions that promote crystal growth are therefore of great interest.

It has long been known that crystal nucleation (the first process in the formation of a crystal) almost always occurs on a surface. For example, ice crystals in cirrus clouds in the upper atmosphere will form on a small aerosol particle rather than in the air itself. However, the physical and chemical properties of surfaces that are conducive to crystal nucleation are still not clearly understood. Dr Christenson’s recent work seeks a clearer “picture” of the underlying topographical properties that promote nucleation.

Start the transformation
When a substance transforms from one form of matter to another, like water (a liquid) changing to ice (a solid), it goes through a phase change. Nucleation is the initial process of the phase change that progresses to crystallisation.


When molecules self-assemble in an ordered structure they become what we generally refer to as crystals. Crystal nucleation can happen from solution, from vapour, or from liquid. Dr Christenson’s research has concentrated on heterogeneous nucleation, which occurs when a particular surface assists the process.

Dr Christenson has extensively studied various aspects of phase change dynamics, investigating what variables affect crystal nucleation. Drawing on the Classical Nucleation Theory (CNT), which describes how physical attributes, such as defects or crevices on a surface, foster nucleation, Dr Christenson devised several experiments to study precisely the effect of these physical features. His research associate Dr James Campbell has contributed significantly to the design of the experiments and carried out most of the experimental work.

Controlling the surface defects
Dr Christenson designed a test to investigate the idea that defects on a surface could help control crystal nucleation. For this experiment, the nucleation from vapour of two organic substances [neo-pentanol (neo-C5OH) and carbon tetrabromide (CBr4)] was studied on flat surfaces of glass and mica using optical microscopy. They were also studied on identical surfaces that had been scratched with diamond powders.1 The particle size of these diamond powders can be carefully chosen, giving experimental control over the size of the grooves on the surface and allowing the team to look at the effect a change in size has. The scratched surfaces were then imaged via scanning electron microscopy (SEM).

The results from this experiment clearly demonstrated that nucleation increased on the scratched surfaces (see Figure 1). Induction time, which is measured from first exposure to the vapour to the first appearance of a crystal visible in the microscope, was also studied. The induction times on unscratched glass and mica were similar. However, the induction time significantly decreases when the surface is scratched and, the larger the particle diameter (and therefore the larger the defect), the quicker the crystallisation occurs. The effects were more pronounced on mica, probably because the scratching gives rise to a greater number of very small and sharply acute topographical features, whereas on glass the grooves tended to be less deep and more rounded in form.

Naturally present defects
In an alternative experiment to investigate the same problem, Dr Christenson and his team studied nucleation of four different crystals (carbon tetrabromide, camphor, norbornane, and hexachloroethane) from vapour on mica. Instead of manufacturing surface features, naturally present defects on the mica surface were studied.2 These natural defects are much easier to characterise than most manufactured features. Repeat experiments were performed to identify the best nucleation sites on each surface. SEM could then be used to image and characterise these favourable sites.

All four compounds were allowed to nucleate repeatedly on a number of mica substrates. All four were seen to nucleate preferentially on the same types of sites which were typically characterised by an acute wedge geometry. Figure 2 shows crystals of carbon tetrabromide growing in naturally occurring defects on mica.

Deep pockets
In a third experiment, the formation of ice and organic crystals were observed in mica.3 Well-defined topographical features with sharp acute wedges, referred to as “pockets,” which naturally occur when Muscovite mica is cleaved, were studied. Optical microscopy was used to characterise (describe) the geometry of the surface as well as image the nucleation sites. The results of this experiment showed that crystals were more likely to form inside and from the corners of these “pockets”. Figure 3 depicts the images of various compounds crystallising in the mica pockets. Often, the crystals are seen to form in supercooled liquid which first condenses in the pockets.

Although the defect features prepared on the mica surface for this test were in the order of micrometres in size it can be inferred that the nucleation would be attracted to the acute crevices even in naturally occurring or manufactured nano-scale sites.

All becomes clear
Using three different experimental approaches, Dr Christenson has demonstrated the dependency of nucleation on surface defects. In agreement with CNT expectations, the cracks on a surface reduce the height of the energy barrier to nucleation. In simple terms, these cracks allow molecules to congregate for longer than they would be able to on a flat surface, increasing the likelihood that they will nucleate.

The results from Dr Christenson’s work show that mechanically produced surface defects can increase both the rate and density of crystal formation. Dr Christenson’s research has now extended to include crystal nucleation from solutions and pure liquids with results that correspond to his work on vapours. This has increased our basic understanding of how crystals form. Importantly though, it also suggests that the engineering of nanoscale topographical features has real potential for control of heterogeneous nucleation, although this remains a significant challenge. Careful implementation of crystallisation techniques would allow for applications in industry (e.g., chemical vapour deposition) and medical diagnostics (e.g., understanding how kidney stones form) among others.

Defects on surfaces are physical changes. How does chemical change on a surface promote nucleation?
<>This is a much-debated question. In the case of nonpolar substances like norbornane and other hydrocarbons, surface chemistry is unlikely to be important. It is a different matter in the case of water, or ionic compounds like calcium carbonate and calcium phosphate, both important biominerals. Particularly ice nucleation, both from vapour and from liquid water, is often discussed in terms of “lattice matching”, meaning that there is a correspondence between the positions of water molecules on the surface of the ice crystal and those of surface atoms on the substrate surface. Also, it has been shown that many organic crystals with hydroxyl groups on the surface are particularly good at nucleating ice from water vapour (a surprising example is testosterone!), but it is notable that the ice crystals are often seen to form in surface cracks on these crystals. Perhaps a synergistic effect of surface chemistry and topography? This is a very important question, and one that we wish to explore in more detail in the near future.

Is high resolution imaging the most critical limiting technology in determining whether direct nucleation from vapour or the 2-step crystal nucleation takes precedence?
<>Yes, I think so. One can use light microscopy or interferometric techniques, which are both limited by the resolution of light – of the order of one micron. Various more sophisticated optical techniques can improve slightly upon this. There is also environmental scanning electron microscopy, which allows imaging in dilute vapour, but the resolution is limited and we have not found it better than optical microscopy.

If the nucleation process is reversed, is it expected to follow the same path in reverse? For example, as ice melted, would it stay frozen for longer in the areas where the initial crystal formed?
<>Short answer is no, there should be no connection.

What do you enjoy most about this area of your research?
<>It is the beauty and variety of the crystalline structures that you can see with your own eyes, albeit often with the help of a microscope. It is also the thought of how order and symmetry are created almost instantaneously as a crystal grows from a disordered liquid or gaseous phase.  Crystallisation is a truly amazing phenomenon.

Would it be possible to spray a diamond-like particle into the atmosphere to induce rain on command to stall a cricket match?
<>Silver iodide has been extensively studied as a cloud-seeding agent to induce precipitation. The results of large-scale trials have been mixed. See http://cen.acs.org/articles/94/i22/Does-cloud-seeding-really-work.html. I have not heard of diamond being used. 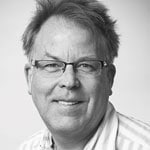 Hugo Christenson is Reader in the School of Physics and Astronomy at the University of Leeds. He received his PhD from the Australian National University, where he spent 20 years doing experimental research on surface forces and phase behaviour in confinement. He is now working on nucleation and crystal growth, particularly on surfaces and in confinement.

Dr Christenson’s work focuses on showing that crystals initially form on small surface defects and proving why this is so.

Dr Christenson would like to acknowledge invaluable discussions with and input from Dr Richard Sear from the Department of Physics, University of Surrey, over many years. In addition:

Modelling the growth of minerals
Physical Sciences
Read This Article