Education & Training
Teaching second languages is big business, and the biggest second language of all is English. Language teaching methods have come a long way in the last century, and in Japan Associate Professor Mutsuko Nagasaki (English Education Centre, Ehime University) has been looking into how ‘oral rehearsal’ at home might supplement classroom learning and improve second language communication and ability in students.

Data suggests that there are more bilingual and multilingual speakers in the world than monolingual speakers (Tucker, 1999). The teaching of foreign languages around the world has developed into successful and meaningful work and business, providing opportunities not only for the students who learn new languages but also for the teachers who are provided with employment and often travel to teach. The teaching of second languages (L2s) is also an area of academic interest for many. There have traditionally been three views on teaching methods: the structural view treats language as a system of structurally related elements (for example, grammar); the functional view sees language as a vehicle through which to express a certain function (for example to give an instruction); and the interactive view regards language as the way we create and maintain social relationships. These different views have informed language teachers for decades and resulted in a wide variety of teaching techniques. 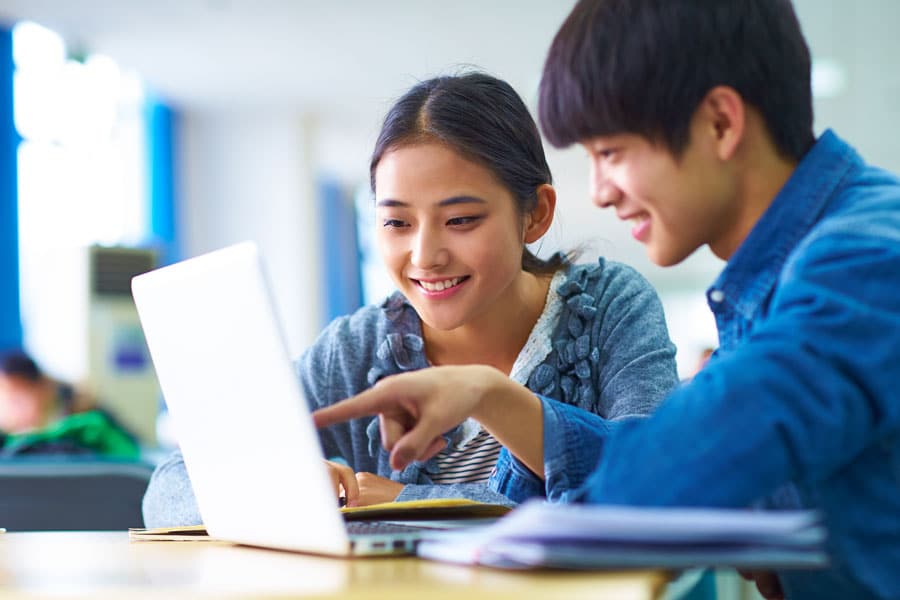 Language teaching: a brief history
Most of us begin to learn at least one L2 while still at school, with varying degrees of success, but many others go on to continue or begin learning a new language in adulthood, either through an institution or privately. Teachers in schools and colleges as well as individual private language tutors will use one or more language teaching methods, some of which you may recognise from your own experiences. Methods informed by the structural and functional views described above have become mostly extinct among language teaching. Examples of techniques informed by the structural view include the ‘grammar-translation’ method and the ‘audio-lingual’ method. The grammar-translation method aimed to instruct students in grammar by providing vocabulary with direct translations to memorise. The method was widely used in Europe in the 19th century; however, it is now generally acknowledged that it is ineffective if used in isolation. The audio-lingual method was developed in the United States at the time of the Second World War, when it became apparent that it was important for foreign language learners to be able to actually speak and understand spoken language as well as written language. Students would listen or view language actors (usually native speakers of the given language) playing out a situation and then practise drills, with the emphasis on using the target language. After poor results, this method is now rarely used by teachers.

Examples of techniques informed by the functional view include the oral/situational approach and directed practice. Developed between the 1930s and 1960s in the United Kingdom, the oral/situational approach built upon the theory that all languages include a core vocabulary of 2,000 or so words that occur most frequently in texts, and that by learning these, students would be able to translate a large amount of the foreign language. In addition, students of this approach were taught via material that reflected the most commonly used sentence structures within spoken language. Material was organised according to theory-led decisions on vocabulary/grammatical complexity and difficulty, in the hope that students would pick things up in the ‘right order’. Finally, all exercises/phrases were presented in ‘situations’. While this oral/situational method is no longer used on its own, many elements remain in countries where the emphasis is on teaching grammar. Directed practice simply refers to the repetition of phrases by students. Although it leads to a quick ‘phrasebook’ type knowledge of a language, it does not provide students with any flexibility to extend their language use outside of these parameters.

Most language teachers and institutions nowadays refer to methods informed by the interactive view, which have been found to be by far the most effective ways of learning a L2. Such techniques include the direct method (refraining from using the students’ native language at all during teaching); the series method (a variation on the direct method in which experiences are directly related to the target language); communicative language teaching (interactions are emphasised as the main means and goal of language learning); and language immersion (in the school context, this is where academic content is delivered in the target language), as well as others.

English in Japan
English has become perhaps the most prominent global language in the world, and is often regarded as the language of business and research. It is the most widely learned L2 on the planet. In Japan, there is a constant demand for English language teachers; and as well as teaching within schools and universities there are also hundreds of ‘Eikaiwa’ or English conversation schools offering Japanese people of all ages the opportunity to learn English and practise their language skills. It follows that research into the best methods of teaching English would be of particular interest to many in Japan. One such researcher is Associate Professor Mutsuko Nagasaki from the English Education Centre at Ehime University. Stemming from the challenges she faced as an English as a foreign language teacher, Prof Nagasaki wanted to look into the idea of ‘oral rehearsal’ outside the classroom in order to improve her students’ English language skills, as opportunities to practise in daily life in Japan were infrequent. This was based on the academic theory that to develop L2 communication ability, output (which improves fluency and accuracy of L2 speaking) is as important as input. 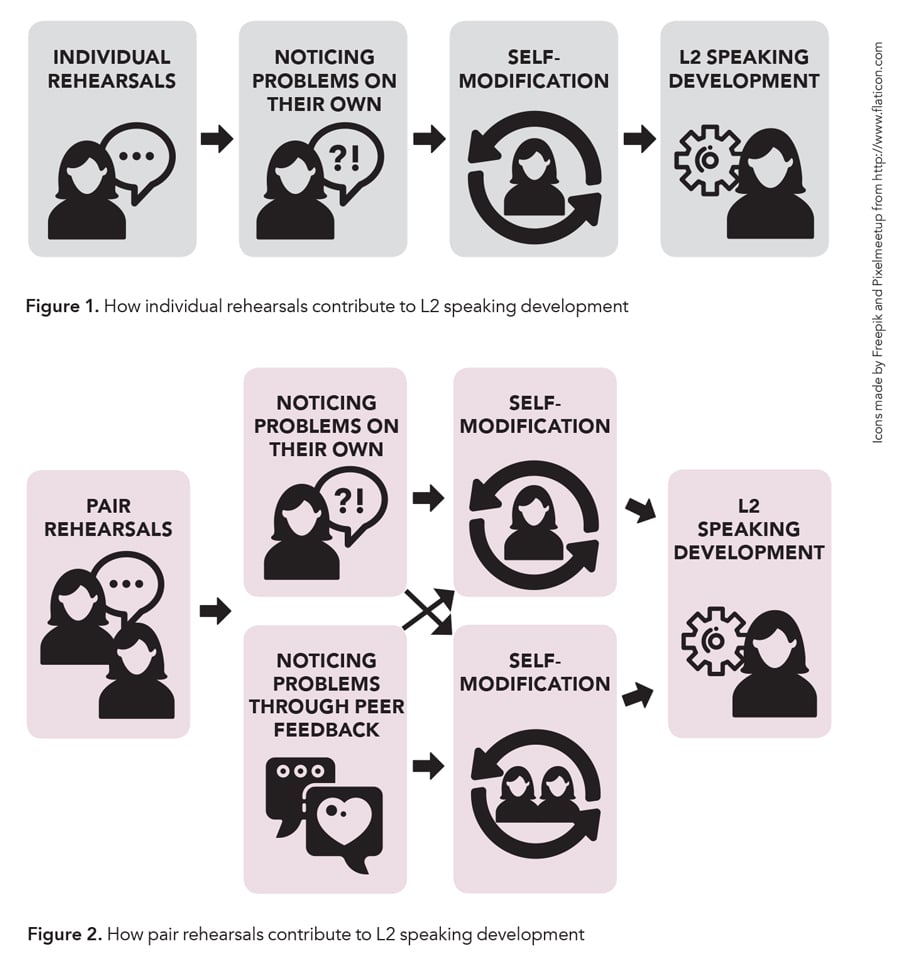 Learning through ‘oral rehearsal’
Prof Nagasaki’s aim was to compensate for the lack of ‘real world’ opportunities to practise English by providing her students with oral rehearsals to carry out at home as well as giving a speech and conducting conversation in class. Between 2015 and 2017, she carried out a thorough research project into individual oral rehearsal teaching methods (where participants practised alone), focusing on its effect on improvements to L2 speaking ability. In the first two studies included in the project, students gave eight different two-minute speeches in class following instructions to orally rehearse at least five times for each speech at home without detailed written scripts (each rehearsal was also recorded). After each rehearsal, students were asked to make a note of any linguistic problems they came up against, and were encouraged to correct these immediately using a dictionary or textbook. Tests were carried out before and after the method was applied to assess the language ability of the student, with each test consisting of both a speaking and narrative aspect. The results of the first study showed that the oral rehearsals had had a positive impact on the speaking assessment, while the results of the second study showed improvements in both the speech and narrative test scores of the participants. It seems clear from this initial research that individual oral rehearsals have a positive impact on the speaking performances of students, as well as highlighting that the rehearsal method helps students identify and rectify their own linguistic mistakes.
A third study in this project, which reduced the rehearsal period from two months to one month, found that even in this shorter time period, speaking assessment scores were improved following rehearsal at home.

In a second research project which began in 2018 and is still underway, Prof Nagasaki has begun to look at the effects of ‘pair rehearsal’ on L2 communication ability. In the first study as part of this project, participants were asked to perform five different five-minute conversations in class without scripts. They were asked to engage in two pair rehearsals and five individual rehearsals for each conversation at home. The participants were again tested before and after the study period. The combined results from both projects suggest that both individual and pair rehearsal were significant predictors of improved L2 communication ability. Specifically, the results indicate that paired oral rehearsal, and its opportunity for peer feedback, improves students’ skills in starting and closing conversations and attitudes in communication (for example, eye contact), and that individual oral rehearsal improves students’ vocabulary and ability to express their own thoughts and opinions. A survey taken as part of the current project showed that students felt that paired oral rehearsal was particularly effective as it allowed them to notice gaps in their L2 skills that they overlooked in an individual oral rehearsal.

This important research by Prof Nagasaki and colleagues has built upon the idea already established in associated literature that modified output plays a key part in L2 learning; that is, learners need time to initiate and modify their own speech (an opportunity provided by the oral rehearsal) in order to improve their communication ability. Further research with larger participant groups can now be carried out and it appears that, in Japan at least, oral rehearsal could play a significant part in the teaching of English as a foreign language, and is an idea that could be applied elsewhere and with other second languages. It is already evidently a far more effective exercise than the old-fashioned “Repeat after me…”!

We have information on one of the studies carried out for the current research project; please could you tell us a bit more about the other studies that have/will take place as part of this project?

<>This year, we are going to conduct research in more advanced English classes and examine whether both individual and pair rehearsals promote their discussion skills. The students are expected to improve their ability to discuss some social issues (e.g., the Japanese entrance examination system) in English. Basically, we will use the same research framework and method as the previous one, but we would like to use a mixed methods approach to make the research more comprehensive and to provide a broader perspective on this issue. Specifically, we will conduct video-stimulated recall interviews to examine what participants were thinking while communicating with each other. I would like to examine how their ability to notice through pair rehearsals and peer feedback affects their later speaking performances and reveals how their communication ability is built upon such an accumulative work of output. 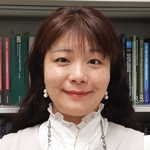 Mutsuko Nagasaki is currently an associate professor in the English Education Center at Ehime University. Her research interests include L2 input and output, classroom interaction, and speaking assessment. She received her PhD in Education from International Christian University and her Master of Science in Education from University of Pennsylvania.

The dangers of labels: English as a Second Language
Education & Training
Read This Article

One thought on “Oral rehearsal: Teaching English as a foreign language in Japan”