Biology
Dr Matt Traxler of the University of California, Berkeley, is changing the way we study microbes. Gone are the days of thinking about a single species in a pure culture in the lab – Traxler and his team of graduate students and postdocs are developing a version of mass spectrometry which promises to allow single microbial cells, and their interactions with other species, to be studied under their natural conditions.

Actinomycetes are a group of bacteria with a wide variety of human uses, but they are best known for producing natural products, also known as specialised metabolites, such as antibiotics. These microorganisms also produce many antifungals and immunosuppressants, among others. Not only are they important for use in human health and veterinary practices, their natural products are also useful in agriculture. Actinomycetes are found in a wide range of habitats including soils and marine waters, and in association with plant roots and insects. These microorganisms rarely exist in single species communities. As a result, actinomycetes may use their range of chemical products to interact with other bacteria in their communities. 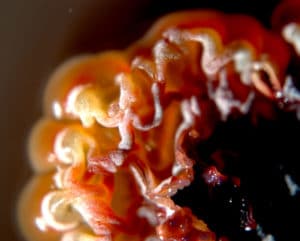 A wide variety of gene clusters have been observed in the genomes of these microbes that would theoretically allow them to produce products that have not been seen in typical lab settings, the majority of which are unknown to us. Usually, in the laboratory these bacteria are studied one species at a time under strictly controlled conditions. These conditions are radically different to those found in natural settings. Dr Traxler and his colleagues see this as a gap in the study of such microbes – by using traditional means we have been ignoring the importance of their interactions with the other microbes in the communities to which they belong.

This was highlighted in a major study in which Dr Traxler and his colleagues found that the well-studied actinomycete, Streptomyces coelicolor, could produce an astounding array of compounds, but only when it interacted with other soil microbes. When studied in interactions with five other actinomycetes, S. coelicolor produced metabolites specific to each of the five other species which it does not produce in isolation. These findings suggest that interactions between microbes may be a rich new source for discovering useful natural products. These metabolites were only observed in specific combinations of species, suggesting that microbes in-situ could produce chemicals we have never seen in the lab. Since then, Dr Traxler has been working to develop an improved method of mass spectrometry imaging that will allow us to study microbes in situ, that is, in the soil, tissues or plant roots where they are naturally found.

A closer look
Dr Traxler and his colleagues have brought together an interdisciplinary approach to this issue, combining mass spectrometry, microbial ecology and microscopy, amongst others, to develop an improved methodology of High Resolution Mass Spectrometry (HR-MSI) that will allow them to study microbes at an ecologically relevant scale. In September 2016, the National Science Foundation (NSF) awarded Dr Traxler a research grant of nearly $300,000 to fund the ongoing development of this new technology.

Matrix assisted laser desorption/ionisation time-of-flight (MALDI-TOF) mass spectrometry imaging (MSI) is a method that enables researchers to visualise the distribution of chemical compounds in a biological sample. In this method, a laser is used to ionise molecules from the sample surface. Moving the laser in a grid pattern allows researchers to create a profile of chemicals from each point across the sample. This information is then used to build images depicting the distribution of individual chemical species.

It is thought that most microbes outside of a lab are found in colonies of less than 100 cells, each of which are around one to five microns in size. A team of researchers in Dr Traxler’s lab, including postdoctoral fellow Rita Pessotti, are working to refine the resolution of their MALDI-TOF apparatus from 10×10 microns to around three microns. This improved resolution will allow single bacterial cells and the chemicals they produce to be studied, not in a large lab culture, but in the plant tissues, soils and even samples from the gastrointestinal tracts of mammals where they would normally occur.

Other improvements are also being made to the methods used in this research, including the optimisation of biological sample preparation techniques to maximise the spatial resolution achieved by MSI. These improvements, once firmly established, will form the basis of a set of protocols that other researchers will be able to use when studying microbes in this way in the future. The ability to ‘see’ molecules produced by individual bacterial cells will open an exciting new window onto microbial life. This will advance our understanding of basic biological mechanisms and principles that govern the exchange of metabolites at the scale of single microbes in their microbiomes – the communities and environments in which they are found. The ultimate aim of this work in the Traxler laboratory is to make the potentially transformative power of micro-scale HR-MSI feasible for any laboratory with an existing high-resolution mass spectrometer.

The future holds an exciting merger between the study of microbial interactions, chemistry, and microbiome function

Changing the future of Microbiology
The Traxler laboratory studies microbial interactions, with an emphasis on understanding how these interactions are mediated by natural products like antibiotics. Dr Traxler’s lab group is an interdisciplinary team, including researchers with expertise in microbial genetics, ecology, natural products chemistry, and informatics analysis. They see that the future holds an exciting merger between the study of microbial interactions, chemistry, and microbiome function.

Dr Traxler seeks to learn why bacteria make compounds like antibiotics. He hopes that, by answering this question, new methods of compound discovery could be formed, helping scientists and doctors design new treatments to minimise the spread of antibiotic resistant pathogens.

Though centred on actinomycetes, the lessons learned from the work of Dr Traxler and his research team could be applied to countless other antibiotic-producing microbes. With an ever-increasing number of antibiotic resistant pathogens, this innovative research could provide new sources of antibiotics with the potential to save numerous lives that would otherwise have gone unnoticed.

Other than the discovery of new antibiotics, what benefits do you think will come of studying microbes at this level?
<>We know that healthy microbiomes are incredibly important to the fitness of all kinds of organisms, including humans. If we want to understand how microbiomes function, we need to understand how the microbes within them interact at the chemical level. Our efforts to push the limits of imaging mass spectrometry will hopefully provide a new way to see chemical interactions within microbiomes, which have implications for human, animal, and crop health.

Why is it important to understand the reasons bacteria make compounds like antibiotics?
<>Antibiotics are essential to our healthcare system, but their efficacy in the clinic is always being eroded by spreading pathogen resistance. Historically, resistant pathogens are usually observed within a few years of introducing a new antibiotic therapy. However, bacteria that make antibiotics, like actinomycetes, have been producing these compounds for millions of years! And, the advantage to making these antibiotics is still robust, even after all that time. This suggests that actinomycetes may use these compounds in ways that we do not understand, and may be profoundly different than the way we use them in the clinic. We have something to learn from these microbes about how to use antibiotics.

Why have these interaction-specific metabolites taken so long to find?
<>Like all researchers, we build on the work of those who came before us. For example, work in the lab of Kenji Ueda at Nihon University in Tokyo began looking at interactions between actinomycetes in the early 2000s, and that work continues to be a big inspiration for us. What we have done is bring new mass spectrometry techniques into the picture, and the chemical diversity we found was really surprising. I also want to give credit to the laboratory of Pieter Dorrestein at UCSD, where I learned many of these mass spectrometry techniques.

Beyond this, I would say that discovering natural products from microbes in pure culture yielded an incredible bounty of therapeutics that sustained us for many decades. As discovering novel compounds has become more challenging, we must innovate, and looking at microbial interactions is one way we can do that.

Where would you like to take this research next?
<>The imaging mass spectrometry tools and protocols we are developing may have many applications in the study of microbiomes, and it will be very exciting to see what we can learn with these new tools. The people in my lab are doing incredibly exciting, multidisciplinary projects. For example, Rita Pessotti, Scott Behie, and Bridget Hansen are focused on understanding the roles of natural products in the microbiomes of plants and insects. Likewise, Bailey Bonet, Vineetha Zacharia, and Dylan McClung are focused on understanding the genetics of microbial interactions, and how we can leverage that information to discover novel compounds. It’s a dynamic time in microbiology, where we are seeing an expansion from thinking about how bacteria function at the molecular level, to thinking about how different bacteria function in communities. Our challenge is to bring these two worlds together, and I hope the tools we are working on will facilitate this new synthesis.

Do you think students at Berkeley benefit from involving this research in their classes?
<>I love working with undergraduate students! I teach the microbiology lab class for majors at UC Berkeley. In this class, the students isolate actinomycetes from their own soil samples, and put them into interactions with each other. Actinomycetes are particularly interesting since they make an incredible array of compounds, but also because they have very interesting shapes and colours that change when they interact. The emphasis in the class is really on formulating hypotheses and designing experiments to test them. I think the students enjoy having the freedom to explore their own ideas, which is what science is all about! 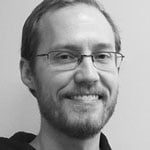 Matt Traxler received his BS and PhD in microbiology from the University of Oklahoma, and was a postdoctoral fellow at Harvard Medical School. His research aims include integrating metabolomic and transcriptomic paradigms with the ultimate goal of understanding the role of specialised metabolism in bacterial interactions and translating this knowledge into a platform for natural products discovery.

Dr Matt Traxler’s research seeks to understand how bacteria interact with one another through natural products like antibiotics. Projects in his lab range from natural products discovery to understanding how these molecules shape microbiomes. A key part of his research involves improving the resolution of imaging mass spectrometry techniques, with the aim of someday seeing molecules produced by individual bacterial cells in microbiome contexts.

Extinct giants, a new wolf and the key to understanding climate change
Earth & Environment
Read This Article
Capturing images and data before the slides degrade into uselessness
Biology
Read This Article

One thought on “Unlocking the chemical secrets of microbial conversations”