Health & Medicine
Environmental factors interact with genetics in driving living organisms’ development throughout life. Epigenetics is the field of study that explores this interaction, as well as its potential effects on individuals’ behaviour and health. Dr Tania Roth, working at the University of Delaware in Newark, USA, carried out extensive research exploring the impact of the environment, particularly stress factors, on individual genes, and how these changes might influence behaviour and psychological development. Her findings indicate that adverse early-life experiences can result in particular alterations in the brain that have consequences for gene expression and behaviour.

Life experiences and environmental factors play a substantial role in how individuals develop over time, in terms of their behaviour, as well as their physical and mental health. However, different people who have similar experiences might react to these in entirely different ways and be affected differently. This is often thought to be due to individual DNA and genetic factors.

Over the past few decades, a considerable body of research has been investigating the way in which environmental and genetic factors interact with one another, resulting in different effects on individuals’ health, behaviour, and psychological development.

Epigenetics: how genes and environment interact
Epigenetics is the field of research that focuses on the biological changes occurring in living organisms as a result of genes interacting with environmental factors and life experiences. A number of factors can influence a human being’s psychological development and health over time, including prenatal environment, parenting, and other stress encountered throughout life. All these different factors leave their marks on an individual being’s genetic make-up (DNA), in the form of chemical tags that instruct genes on what to do. Studying and observing these alterations could help determine how stress factors can affect different individuals’ physical and mental health. Dr Tania Roth has been investigating the epigenetic alterations in the brain that can occur after early-life adversities, such as maltreatment or poor parenting.

The pups of maltreated female rats showed epigenetic alterations later in life, which still occurred even if the pup was placed with a foster mother

Brain alterations after adverse early-life experiences
Dr Roth and her team of researchers carried out experiments on rats to test the epigenetic effects of early-life adversity in the brain, as well as their behavioural outcomes. By providing scarce living resources, such as nesting materials, they prompted rats to offer poor caregiving to their neonate pups. They then tested the rodents who received maltreatment for any changes or abnormalities in the brain.

The rats that received poor caregiving presented a number of epigenetic alterations, which varied according to the rats’ sex. These alterations were particularly pronounced in brain regions known to be affected by child abuse and neglect, such as the prefrontal cortex, the amygdala and the hippocampus.

The prefrontal cortex is a region of the brain associated with a number of complex behaviours and cognitive functions, while the amygdala is involved in the experiencing of emotions. The hippocampus has been found to play a role in memory and emotion processing. Dr Roth’s research suggested that infant–caregiver interactions could mark genes that have previously been found to play a prominent role in psychiatric disorders.

Maltreatment appeared to cause changes in methylation, the process by which methyl groups are added to the DNA, particularly in neurons. Methyl groups are chemicals made up of a single carbon and three hydrogen atoms. The biochemical process of methylation is involved in regulating the expression of genes.

Epigenetic effects on behaviour
Dr Roth’s research found that poor caregiving for neonate rats did not affect their behaviour as adolescents, but significantly affected their behaviour as adults. Female rats who were maltreated as pups appeared to be more anxious days before giving birth and also displayed the same types of adverse caregiving behaviour towards their offspring that they received from their caregivers in early-life. Moreover, the pups of maltreated female rats also showed epigenetic alterations later in life, and some of these alterations still occurred even if the pup was placed with a foster mother who had not been maltreated in early life.

As well as displaying these disruptions in maternal behaviour, the maltreated females also performed poorly in a series of cognitive tasks. The male rats tested during the study appeared to present problems with extinguishing fear-related or troubling memories.

The rats that received poor caregiving presented a number of epigenetic alterations, which varied according to the rats’ sex

Preventing or reversing epigenetic states
Understanding the epigenetic alterations that follow adverse early-life experiences or environmental factors could help to devise policies or treatments that could either prevent or reverse these changes in the brain.

Dr Roth’s research has found that treating adult animals with a drug that changes methylation states can somehow counteract or rescue the changes in DNA methylation and gene expression produced by the maltreatment. She is now exploring the possibility that the same pharmacological treatment that could reverse these epigenetic states might also be able to affect the maternal behaviour of maltreated females, leading them to display more nurturing caregiving tendencies.

In future, a similar treatment could be developed to counteract the effects of poor caregiving on methylation states earlier on in development, which might change the behavioural trajectories that follow mistreatment and prevent the adult rats from replicating the same dysfunctional behaviour while raising their own pups.

A meaningful contribution
Dr Roth’s research has provided evidence suggesting that maltreatment and other adverse environmental factors in early life can produce changes in methylation processes within the brain, which result in altered gene activity and adult behaviour. Her work has substantially contributed to the field of research exploring epigenetics, providing further empirical evidence of preventable and potentially reversible epigenetic states.

If Dr Roth’s observations were found to be similar in humans, her work could aid the development of pharmacological or behavioural treatments to prevent, counteract and reverse some of the behavioural and developmental effects of adverse early-life experiences.

When did you first become interested in the interaction of environmental factors and genetics, as well as the effect it might have on human health and development?
<>During my graduate training I became interested in understanding how an experience or environmental factor could get under the skin to influence development and behaviour. I was fascinated by the brain’s capacity to change because of experience, and curious how factors like child abuse and neglect could hijack developmental processes or have such long-lived consequences for behaviour and mental health.

What do you feel are the most important findings you have collected so far through your research and why?
<>We have shown that poor parenting early in development can have multigenerational consequences on DNA methylation states in the brain. These data provide an empirical basis for the far-reaching effects of early adversity, helping us understand some of the biology of how factors like child abuse and neglect can affect health and development. But we have also shown that epigenetic manipulations can reverse these states, and projects underway in the laboratory suggest these strategies also rescue aberrant behaviour. Such data demonstrate that the epigenome retains malleability throughout life and suggest it could be a target for changing brain and mental health.

Do you believe your findings on rodents could be applied to humans as well and what evidence is there supporting this?
<>Yes. Several reports indicate similar methylation changes in humans with a history of maltreatment. Specifically, they see the same change in DNA methylation in peripheral measures that we see in the brains of our rodents. There is also some evidence that certain forms of behavioural therapy and intervention can change epigenetic states in humans.

What are your plans for further research and investigation?
<>We are working to translate our findings to humans. In current collaborative research with Dr Mary Dozier (a clinical psychologist at the University of Delaware), we are studying DNA methylation patterns in parent–child dyads who were involved with Child Protective Services as the result of allegations of neglect. We are also investigating the reversibility of these epigenetic alterations following a behavioural intervention programme (designed by Dr Dozier) that is based on attachment theory and stress neurobiology. 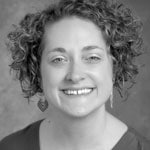 Dr Tania Roth is an Associate Professor and Director of Graduate Education in Psychological and Brain Sciences at the University of Delaware, where she teaches upper-level and graduate courses in psychology and neuroscience. Her research programme is focused on defining epigenetic mechanisms responsible for environmental influences on gene activity, development of behaviour, and psychiatric disorder.

Dr Roth’s work explores the impact of the environment, specifically stress, on our genes and how these epigenetic changes influence our behaviour and development.