Biology
In contrast with other species of aquatic turtles, softshell turtles cannot survive long without oxygen and this affects how they hibernate in the winter. Instead of fully burying themselves into the substrate at the bottom of a body of water and staying there, they must periodically raise parts of their body above the sediment to breathe in oxygen that is dissolved in the water. Mike Plummer, Professor Emeritus at Harding University, has carried out a study investigating the hibernating behaviour of softshell turtles and how they sustain aerobic respiration throughout the winter.

Many types of aquatic turtles hibernate underwater, surfacing only at the end of the winter. During this hibernation period, some species bury themselves under the sediment at the bottom of the body of water they inhabit, which typically contains very little or no oxygen. To survive for prolonged periods of time under the sediment, however, turtles need to be able to effectively utilise metabolic pathways that produce lactic acid. This process closely resembles the ways in which human athletes recover when they run out of oxygen after intense physical activity.

Smooth Softshell Turtles (Apalone mutica) cannot tolerate a buildup of lactic acid, thus they need to continuously obtain the oxygen dissolved in water via their thin vascular skin. As a result, when they hibernate they are unable to lay still under sediment for long periods of time and occasionally must reach the water column to breathe. Biologists have been studying the skin breathing mechanisms of softshell turtles for many years, with the hope of better understanding the unique mechanisms that promote their survival during winter.

Apalone mutica: an aquatic turtle that can breathe through its skin
The Smooth Softshell Turtle (Apalone mutica) is a small primarily carnivorous turtle with an elongated head and a soft, leather-like shell, which belongs to the Trionychidae family. So far, researchers have identified two different subspecies of Apalone mutica with different head and eye configurations, dubbed A. m. mutica and A. m. calvata.

In their youth, the top portion of these softshell turtles is typically light-brown, brown or greenish-brown, presenting small dark spots and bacilliform rods arranged in a specific pattern. While adult males retain this pattern, in females this pattern is gradually replaced by an irregular and marble-like pattern.

Apalone mutica are able to take in and release gases via their thin and highly vascularised skin of their mouth, throat, anus and ventral body surface.

Smooth softshell turtles are native to North America, where they have been observed in 23 U.S. states, ranging from Pennsylvania to New Mexico and the Florida panhandle region. Apalone mutica are generally found in medium and large unpolluted rivers with strong currents and clean sand banks. Their period of activity generally goes from the end of March/beginning of April to the middle of October, but they can sometimes go into hibernation earlier or come out sooner, depending on the climate in the regions they inhabit.

While many turtle populations worldwide are at risk of becoming extinct due to damage to their environment, those softshells living in rivers, such as Apalone mutica, appear to be particularly vulnerable. In fact, these turtles have very specific ecological needs that make them particularly susceptible to the pollution caused by human activities.

A characteristic that distinguishes softshell turtles from some other aquatic turtles is that they require significant amounts of oxygen to survive while under water and their metabolism can only be sustained by extracting this oxygen from the water. While other turtles may also have this ability, in Apalone mutica, it is particularly advanced, as they are able to take in and release gases via the thin and highly vascularised skin of their mouth, throat, anus and body surface. When the oxygen in the water surrounding them is depleted, therefore, the turtles must move around in their environment, or move specific body parts, to actively seek out ‘new’ water that contains more oxygen. This characteristic unavoidably affects their hibernation strategies, as it prevents them from laying still or burrowing deep for prolonged periods of time under the sediment at the bottom of rivers or ponds, like some species of turtles do.

The hibernation behaviours of softshell turtles
Although many past studies have tried to gain a better understanding of turtle hibernation strategies, the specific mechanisms and behaviours that facilitate the survival of Apalone mutica during the colder months remained unexplored for many years.

Prof Mike Plummer at Harding University has conducted studies exploring the capabilities and hibernation behaviours of softshell turtles. Over two decades ago, he gathered valuable observations using radiotelemetry techniques, which can infer the movements/behaviours of animals from radio signals originating from transmitters attached to the turtles and picked up by an antenna.

A study by Prof Plummer and his then undergraduate student Cary Burnley, published in 1997, revealed that free-ranging Spiny Softshell Turtles (Apalone spinifera), a close relative of Apalone mutica, hibernate by burying themselves in sediments at the bottom of the streams they inhabit, which contain varying mixtures of mud, sand and gravel. The sites where these turtles retire for the winter are not usually situated in the deepest part of a stream or river and are typically less than a meter under the level of the water, which is enough to prevent them from reaching the water surface and breathe in air, as they do during their period of activity.

Moreover, Prof Plummer and Burnley observed that Spiny Softshells bury themselves under a few centimetres of sediment, as this allows the turtles to reach up when necessary to obtain oxygen from the water taken into their mouth and throat. They also found that the body temperatures of this softshell species as it is hibernating ranged between 1.5 and 16.2 °C and closely resembled the temperature of its surrounding environment.

While this is an interesting example of a turtle hibernation strategy, different softshell species have unique characteristics that affect how they protect themselves and rest in the winter. Recently, Prof Plummer conducted new research, published in 2019 in collaboration with Caleb O’Neal, an undergraduate student at Harding University, to specifically investigate the biological mechanisms and behaviours underpinning the hibernation of Apalone mutica.

Apalone mutica repeatedly perform an aerobic ‘push-up’ movement, which allows their skin to absorb oxygen in the surrounding water.

Aerobic push-ups in hibernating Smooth Softshells
To study the hibernating behaviour of Apalone mutica, Prof Plummer and O’Neal used remote cameras to monitor turtle behaviour in an outdoor pond, which was inhabited by 25 specimens of 2-4 year old Smooth Softshell Turtles that hatched from eggs collected on the White River, in Arkansas.

During the winter, when the turtles went into hibernation, they partially buried themselves in a substrate of sand/mud. In contrast with Apalone spinifera and other turtles, they observed that Apalone mutica raised and lowered the posterior portion of their body into the water column periodically and intermittently, performing a ‘push-up’-like movement. Prof Plummer and O’Neal hypothesised that the behaviour allowed the turtles to replenish the water against their bodies and breathe oxygen through their skin.

These ‘push-up’ movements were performed in a similar way by all the Apalone mutica specimens they examined, but they occurred with varying frequencies. These frequencies appeared to be correlated with the temperature of the water surrounding the turtles. Essentially, the colder the water around them was, the less frequently they pushed their body up to breathe. This is not surprising, as cold water can hold greater quantities of oxygen than warm water, thus it may fulfil their needs for a longer period of time.

To study the push-up behaviour they observed more closely, Prof Plummer and O’Neal also simulated the conditions of winter in the aquaria they set up inside their laboratory where they could measure the actual oxygen content of the water. Their experiments confirmed that Smooth Softshell Turtles hibernating in water with high oxygen content execute ‘push-ups’ less frequently than those placed in water containing less oxygen.

Overall, the observations gathered by the two researchers show that Smooth Softshell Turtles intermittently ‘push-up’ above the sediment they are buried in while hibernating in order to breathe and survive throughout the winter. This ‘aerobic’ respiration mechanism creates currents that allow the turtles to replenish the layer between their vascularised skin and oxygenated water in their surroundings.

A step towards understanding the hibernation strategies of Apalone mutica
The recent study carried out by Prof Plummer and O’Neal unveiled some of the dynamics that allow Smooth Softshell Turtles to survive and successfully hibernate in winter. More specifically, it showed that while this species hibernates a couple of centimetres under the sediment at the bottom of a water body, unlike other types of aquatic turtles it needs to continuously rise above it and breathe oxygen in the water.

How widespread the push-up behaviour identified by Prof Plummer and O’Neal is among different turtle populations remains unclear. In the future, this recent work could inspire new studies that examine this behaviour across species or that take a closer look at its evolutionary and biological underpinnings. 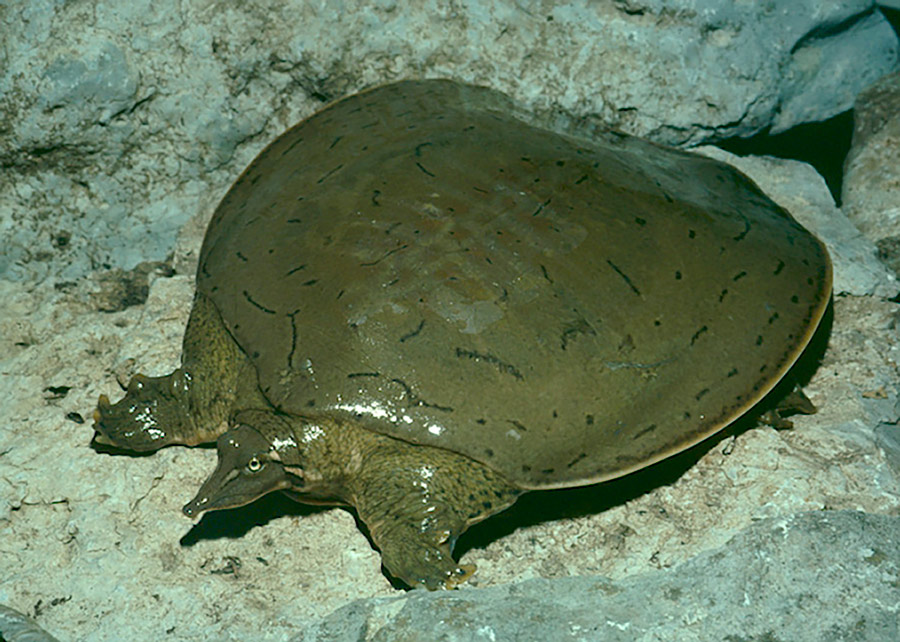 What fascinates you most about Smooth Softshell Turtles and what are the main characteristics that set them apart from other aquatic turtles?

<>As a result of their lack of a hard shell and their thin vascular skin, the physiology of softshell turtles is unlike that of most turtle species, which have hard bony shells and thick skin that limit water and gas exchange with their environment. In this respect, the physiology of softshell turtles is more like that of amphibians, rather than most other reptiles, which makes for some interesting research on their sometimes unreptilian-like biology. In the final analysis, however, I got hooked on softshells when I was just a kid because they are really cool and charismatic animals!

I am currently collaborating with Dr Sean Doody of the University of South Florida in a study of latitudinal variation in nesting in A. mutica and other turtle species. Like much of my research, this study will involve undergraduate students at Harding University. 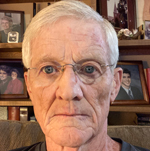 Mike Plummer is Professor Emeritus in the Department of Biology at Harding University where he taught biostatistics and vertebrate biology for 44 years. He holds a PhD from the University of Kansas and a MS from Utah State University. Prof Plummer’s research focuses on the ecology of snakes and turtles.

Prof Plummer studies various aspects of the ecology of softshell turtles, both in the field and in the laboratory. His research typically involves undergraduate students.