Health & Medicine
All cells generate and respond to mechanical forces. The role of mechanical forces in cell biology has been understudied, but the forces are essential components of our physiology in health and disease. For example, they are involved in pathologies such as cardiac arrhythmias, muscular dystrophy and metastatic cancer. Dr Frederick Sachs from the University at Buffalo, New York, focuses on the properties of mechanosensitive ion channels and the forces in living cells in real time by utilising fluorescence and atomic force microscopy.

Mechanical forces play an essential part in our perception of the environment. Our sense of touch relies on the ability of forces applied to the skin to be transmitted to mechanically sensitive nerves that generate electrical signals to be sent to the brain. Our sense of hearing obviously depends on mechanical forces as sensory cells of the cochlea detect the vibrations created by sound pressure waves and transmit the information to nerves to be relayed to the brain. Mechanical transduction by nerves provides many less specialised senses such as our feeling of heartbeat, breathing, and muscle forces and the position of our joints.

All these senses are enabled by sensory receptors that convert mechanical forces into electrical activity in the nervous system. However, in addition to nerves, every cell in the body responds to mechanical inputs. Dr Frederick Sachs and his collaborators from the University at Buffalo, New York, showed that skeletal muscle for example, the prototype motor organ, has sensory receptors that respond to deformation of the cells.

Energy sources
In addition to chemical and electrical energy, cells use mechanical forces to supply energy in cells. All three stimuli help keep cells updated about their environment. Those stimuli trigger activity in a variety of biochemical pathways that are involved in processes such as cell differentiation, mitosis (cell division), cell motility (migration from one location to another), apoptosis (cell death), and homeostasis (maintaining a balance of factors that make a cell healthy despite a changing environment). Communication among the three systems (mechanical, chemical and electrical) is essential to allow cells and tissues to be receptive to environmental changes. Chemical and electrical signalling systems are well studied, not much is known about the role of mechanical forces since probes to measure those forces have only recently been discovered.

Exogenous mechanical stimuli
Exogenous mechanical stimuli originate from the surrounding environment including the mechanical properties of the substrate: bone is stiff and fat is soft. Stretching the substrate that cells are growing on stretches the cells, and this modifies cell growth and differentiation. If the substrate is stiff, such as a glass slide, the forces within cells are modified to incorporate the effect of that stiffness. When stem cells are cultured on a soft substrate with the elasticity of brain tissue, the cells acquire neuronal properties while, when cultured on a rigid substrate, they develop the properties of bone cells.

Endogenous mechanical stimuli
The movement of motor proteins and deformation of the cytoskeleton create stimuli. A common deforming stimulus is osmotic pressure produced by concentration differences of diffusible substances between the cytoplasm and the extracellular space. These concentration differences can make cells shrink or expand by moving water out or into the cell. While traditionally thought that cells could be compared to balloons with osmotic pressure inflating the cell, Dr Sachs and his team showed that the energy produced by osmotic forces was actually distributed in three dimensions throughout the cell, and that it was therefore reasonable to compare cell mechanics to sponge mechanics. A kitchen sponge starts out small and stiff, but when placed in water, it swells and gets softer. Water initially flows into the sponge because there is room for it. Sponges are water-filled domains surrounded by the elastic fibres. An influx of water fills these domains, stretching the surrounding fibres and raising the local water pressure. The influx of water will stop when the pressure in these fluid domains pushes back incoming water. Like a sponge, the cell’s cytoskeleton is made of cross-linked elastic fibres and behaves similarly.

Because of the significant roles they play in the modulation of physiological activity, dysfunction of mechanosensors can have severe consequences.

Mechanical forces generated by motor proteins belong to three families known as dyneins, kinesins and myosins. Able to crawl along cytoskeletal fibres, these proteins convert chemical energy into mechanical force. They play a major role in transporting intracellular components through the cytoplasm and across the cell membrane.

Mechanosensors
Most mechanosensors are proteins that change shape when stressed. Mechanosensitive ion channels (MSCs) are a prime example of mechanosensors. Present in all types of cells, they form a conductive pore across the cell membrane that can open and close with stress. These channels are normally closed but when stressed they open up, allowing ions to flow through them and create electrical current.

Some mechanosensors link the extracellular matrix with the intracellular cytoskeleton. For example, proteins called integrins can activate biochemical signal cascades that regulate gene expression, cytoskeleton structure, cell survival and migration. Mechanical stimuli are delivered by mechanosensitive structural proteins, such as talin, that are sensitive to tension. When activated by a mechanical stress, talin binds to integrins and induces a conformational switch. This conformational switch affects the extracellular domain of the integrin and the way it interacts with the extracellular matrix. This distribution of forces is known to regulate cell adhesion and migration.

When mechanosensors dysfunction
Because of the roles they play in the modulation of physiological activity, dysfunction of mechanosensors can have severe consequences. They play a significant role in muscular dystrophy, cardiac arrhythmias, hypertension and metastatic cancer. Resting cells are mechanically quiet, but sick cells are deformed. For example, Dr Sachs and his team worked on xerocytosis, a hereditary blood disease that causes dehydration of red blood cells resulting in anaemia. Xerocytosis has been traced to mutations in the gene for an MSC named PIEZO1. Dr Sachs’ team characterised the molecular properties of these mutations, raising the question of what role these channels serve in normal red blood cells. They appear to increase the mobility of the cells, which makes them more deformable and prevents them from getting stuck in small capillaries.

Dr Sachs and his team are also working on Duchenne muscular dystrophy, a sex-linked genetic disease of muscle caused by the depletion of dystrophin, a fibrous protein that reinforces the cell membrane. The loss of dystrophin leads to mechanical stresses being transferred to the lipid bilayer of membrane where MSCs reside. Activation of these channels lets calcium ions leak into the cell and activate enzymes that chew up a variety of muscle proteins. The team showed that GsMTx4, a peptide they found in a tarantula venom, inhibits MSCs and can protect dystrophic mice. GsMTx4 could be a potential therapy for humans since there are currently no effective drugs to treat muscular dystrophy. GsMTx4 has a long half-life so it doesn’t need to be taken often and is only administered by superficial injection simplifying drug use at home. In the same way that GsMTx4 protects dystrophic skeletal muscle, it also protects the heart from damage of a heart attack and is an effective drug against atrial fibrillation in accord with the idea that the drug only acts on pathologically disturbed cells. It is a promising drug that only acts on sick cells, thereby minimising side effects.

Further research
Another part of Dr Sachs’ work consists of measuring intracellular forces in real time. To do that, the team made genetically coded force-sensitive optical probes and explored the role mechanical stresses in structural proteins such as actin, spectrin and actinin played in living cells. One of their studies showed that the differentiation of stem cells into specific descendants was strongly influenced by the tension in actin fibres. The stress probes were expressed in transgenic animals, allowing researchers to study the role of protein mechanics in cells, tissues, organs and organisms. This opens up possibilities for the development of a new class of drugs.

What is, for you, the most exciting part of your work? 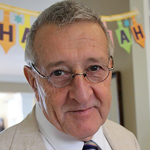 Frederick Sachs is Distinguished Professor in the Department of Physiology and Biophysics, Jacobs School of Medicine & Biomedical Sciences at the University at Buffalo. His research interests focus on mechanical and electrical biophysics, from molecules to organs, and the development of new research tools in hardware and software.

In addition to understanding the basic science of cell properties, Dr Sachs is exploring how biomechanics can improve drug development.