Biology
The historical records of when plant species burst into flower can highlight changes in seasonal events (phenology) that may mirror ecosystem responses to climate change. A team of four researchers, Jim Anderson (Professor of Forestry and Natural Resources at West Virginia University), Lori Petrauski (Field Ecologist for the National Ecological Observatory Network), Sheldon Owen (Extension Wildlife Specialist for the West Virginia University Extension Service) and George Constantz (ecologist and founder of Cacapon Institute), have examined 111 years of records for two spring-flowering plants in the Appalachian Mountains of West Virginia.

In temperate climates, the first flowering plants of spring are heralded as a welcome relief from winter. Since ancient agricultural times, observations on when trees come into leaf or the first buds bloom have been a guide to nature’s calendar and weather prediction. For example, the traditional saying ‘If oak’s before ash, you’re in for a splash. If ash before oak, you’re in for a soak’ suggests that the leafing out in these two trees might tell us what sort of spring to expect. Periodic plant or animal life cycle events, such as the emergence of leaves or flowers, are known as phenophases and the study of them as a whole is phenology. While the ancient sayings may not be reliable predictors, the associated historical records of seasonal plant events such as flowering are now providing support data for phenology.

Plant responses are complex and variable. For example, flowering is influenced by seasonal and between-year variations in climate, especially temperature, as well as habitat factors, such as elevation. Changes in these responses will alter the abundance, distribution, reproduction and survival of the plants as well as their ecological relationships with other species. As the climate changes, plants must adapt if they are to survive. By studying changes in plant phenology, researchers hope to gain clues to the health of future ecosystems in relation to climate change.

Spring ephemerals – fast, early blooming flowers – of the Appalachian Mountains in Eastern North America provide useful indicators of shifting phenology due to climate changes in the deciduous forest ecosystem. The researchers here investigated shifts in the flowering dates for two species of spring wildflowers over the last 111 years of records. The two species selected were Cutleaf Toothwort (Cardamine concatenata) and Yellow Trout Lily (Erythronium americanum). Both are widespread in the region and have significantly advanced their spring flowering during that time.

The team wanted to see if climatic and non-climatic factors were affecting the species’ flowering dates, and if those dates were changed by their location or elevation. The timing of phenophases is strongly related to climate and, since climatic conditions vary with location, it can be difficult to compare specimens collected over large topographical areas. Finding evidence for these effects is also often hampered by a lack of detailed long-term observational data. Fortunately, long-term data from herbarium specimens were available for both the species they investigated.

Historical phenology
Worldwide phenological information collections and networks are being developed to gather data from individuals and from small phenological monitoring projects. However, these databases are relatively new and long-term baseline data are needed if researchers are to track changes over greater time spans. A variety of historical plant records are proving useful in expanding the temporal range of phenology data and providing a baseline with which to compare current phenology observations.

Herbarium specimens can be used to reconstruct historical phenology of spring ephemerals in response to the changing climate.

For example, keen naturalists and gardeners have been recording as a pastime when plants flower for centuries. By tapping into archival sources on plants, which can include observations from diaries of nature-loving citizens, dated photographs and herbarium specimens, it is possible to investigate phenological and climate changes, even over a large and variable geographic area. A resurgence of interest in these historical records has led to the establishment or renewal of many phenological recording networks.

The West Virginia Climate History Project was set up in January 2015 to gather phenological information from archival sources in the region. The data gathered are being used to inspire citizen science projects and conduct further research about the plant phenology of the area. Where studies of flowering phenology have been constrained by a lack of long-term historical data, herbarium specimens and photographs can now be used to reconstruct historical phenology of spring ephemerals and other flowering plants in response to the changing climate.

Flowering phenology
Temperate flowering phenology is complex, involving cues such as temperature and day length to match flowering time to appropriate seasonal conditions. In other words, plants need to know when spring has come. If any plant phenophases are altered by climate change, this is likely to have far-reaching effects on the health of ecosystems. For example, a disruption to flowering times could potentially uncouple the emergence of flowers from their pollinator’s life cycles.

The strongest environmental predictor of spring flowering dates has been found to be temperature, which varies with snowmelt and elevation. Warmer winter temperatures have also been linked to earlier flowering dates for many plant species while increased precipitation has been linked with later flowering in spring ephemerals. The benefits of earlier spring blooming could include more light and moisture and less competition for pollinators. However, earlier flowering could also result in frost damage. So, flowering time is likely to affect the long-term survival of the species of wildflowers studied here.

Flowering phenological datasets most commonly record first flowering dates, i.e., flower emergence times. However, when there are many people involved in recording efforts, it is important to define what constitutes flower emergence. Depending on the species, the time when a particular plant is in full flower could range over several weeks, which could in turn decrease the reliability of the data collected. By taking factors like this into careful account when assessing data, herbarium specimens can successfully be used to show flowering response to changing climate.

The researchers predicted that when they examined the historical record they would find that spring ephemerals have shifted their flowering dates in response to changes in climate, especially increased spring temperature, and that plants at higher elevations in the Appalachian Mountains would flower later than those at low elevations.

Cutleaf Toothwort and Yellow Trout Lily show earlier spring flowering
In the study here, herbarium specimens and dated photographs from six public herbariums and a personal herbarium in West Virginia for the period from 1904 to 2015 were used to identify locations and flowering dates for the common wildflowers Cutleaf Toothwort and Yellow Trout Lily. The observations gained from the specimens were used to determine average flowering date, which most accurately represents the shifts and changing phenology of these species.

Only historical items that included date and location were used in the study. For elevation data and accurate climatic data, location descriptions on the herbarium specimens and photographs were mapped. Climate data at thirteen stations in West Virginia have luckily been recorded since 1890. This information was used to estimate the average yearly temperature, spring and winter temperatures, and spring precipitation for each of the flowering observations obtained.

If flowering responses are altered by climate change this is likely to have far-reaching effects on the health of ecosystems.

The study found that both Cutleaf Toothwort and Yellow Trout Lily had significantly advanced their spring flowering by an average of 0.91 days per decade over the last century. As expected, spring temperature was the strongest predictor of flowering date: 2.91 and 3.44 days earlier per 1°C increase in spring temperature for Cutleaf Toothwort and Yellow Trout Lily respectively. Flowers found below 500m elevation bloomed earlier and demonstrated a stronger shift in flowering date over time than flowers found higher than 1,000m elevation.

Phenological mismatch and climate change
Phenological mismatches can occur when periodic life cycle events are out of synchrony with one another. We now know that climate change alters the seasonal life cycle events of species and is likely to affect their ecological relationships. How such effects will come about, how often they might occur and how great their impact will be is difficult to predict. Certainly, time-sensitive relationships, such as flowering when pollinators are around, could be disrupted or altered, which could in turn affect successful reproduction.

The research undertaken by Anderson, Petrauski, Owen and Constantz suggests that, as a result of earlier flowering caused by earlier onset of spring, both of the currently widespread species of spring ephemerals studied are at risk of phenological mismatches occurring. These could include disruption of pollinator interactions and effects on other insect species that may depend on their flowers, such as the West Virginia white butterfly (Pieris virginiensis). However, we do not know exactly how sensitive such species will be to phenological mismatches like this when they occur.

Spring is clearly starting sooner in West Virginia. Even so, different species differ notably in their response to temperature. What factors are involved in these differences remain to be investigated. In some cases, shifts in phenology could even alleviate existing mismatches and promote the exploitation of newly available resources by some species of plants and animals. To better understand the effects of climate change, more flowering stages and records of flowering duration could be included in flowering phenology datasets in order to take fuller account of the developmental cycle underlying flowering.

Can you expand on the role past amateur naturalists and plant lovers have played in supporting your research, to add historical interest and encourage current citizen science?

<> This research would not have been possible without the enthusiasm of plant lovers before us. The data for this study were collected by past naturalists who loved the science, beauty, and craft of preserving wildflowers. By examining these specimens, we studied a snapshot of life from a specific location at a specific time – a puzzle piece left for us by citizen scientists of the past. It is likely that these naturalists had no idea that their preserved wildflowers would be used to track changes in climate, which is encouraging for current amateur naturalists who love learning or experiencing the outdoors through citizen science.

Flowering phenology of spring ephemerals in the Appalachians was last modified: January 14th, 2020 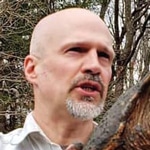 Jim is Davis-Michael Professor of Forestry and Natural Resources at West Virginia University. 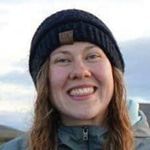 Lori is from northern Minnesota and has completed a Bachelor’s degree in Ecology from Seattle Pacific University, and a Master’s of Science from West Virginia University studying phenology. Currently, Lori is a Field Ecologist for the National Ecological Observatory Network (NEON) specialising in botany and entomology in interior and northern Alaska.

Sheldon is the Extension Wildlife Specialist for the WVU Extension Service. He works collaboratively with landowners and natural resource conservation organisations to provide outreach and education for landowners to discover ways they can better understand and manage their wildlife and woodlands.

The four authors looked back through 111 years of records to discover whether the flowering dates of two plants have changed over time.