How and why do humans think and act in the ways that we do? To answer this question, Dr Paul Badcock and his colleagues have recently proposed a theory of the human brain that combines evidence from evolutionary and developmental psychology, neuroscience, and biology. This theory posits that the human brain is a complex adaptive system, composed of relatively specialised and domain-general structures that work in tandem to generate adaptive responses to the environment. Arguably, their Hierarchically Mechanistic Mind (HMM) model brings us closer to a comprehensive understanding of the brain.

The desire to understand the greatest enigma of all – our own minds – has been the driving force behind many scientific endeavours, leading to the development of theories and experiments aimed at explaining the mechanics of being human. Human thoughts, feelings, and behaviours are rooted in the brain, where a complex network of cells receives information from the internal and external environment, transforming this information into our experience of ourselves, the world around us, and our relationships with it. It goes without saying that how this happens is still being explored.

Relative to those before, the 21st century has borne witness to tremendous advances in our understanding of the brain. Research is still ongoing, of course, albeit now more ecumenical than ever – bringing together fields that have long been divided. At the cutting edge of progress in synthetic, interdisciplinary research, the group led by Dr Paul Badcock has recently proposed a model of the brain that synthesises major paradigms from psychology, neuroscience, and biology to explain why and how we think and act in the ways that we do.

Their hypothesis, called the Hierarchically Mechanistic Mind (HMM), combines two established claims. The first claim, formulated by Dr Badcock’s colleague, Professor Karl Friston, postulates that the human brain is a hierarchical ‘prediction machine’ that strives to improve its model of the world by generating adaptive cycles of perception and action that operate synergistically to reduce our uncertainty about the environment. The second claim, based on Tinbergen’s famous four questions in ethology, proposes that to understand human thoughts and behaviours, hypotheses must be developed and tested across multiple levels of analysis in psychological science. In other words, researchers seeking to explain psychological traits should endeavour to understand why a given trait might be adaptive, along with how it emerges from the dynamic interplay between evolutionary, developmental, and real-time mechanistic processes.

The way the brain is wired
The HMM is built upon the idea that the brain is composed of distinct components that have different functions and that exchange information in a hierarchical, integrated fashion. For example, there are parts of the brain that are responsible for processing sensory stimuli and controlling particular types of movement, while other parts of the brain, like the prefrontal cortex, integrate and act upon information processed elsewhere to generate executive decisions. Smaller, more specialised elements are encapsulated into larger elements for combined functionality, acting in a kind of hierarchy that creates dependencies between structures. This architecture is characterised by two types of processing: specialised functional processing that occurs over a short distance, within a dense, focused neural region; combined with a global, functional integration that occurs over longer distances between structures. In other words, our thoughts, feelings, and actions are determined by the complex, long-distance integration of localised processes, which are created by specialised populations of cells connected to other regions that each perform different functions. 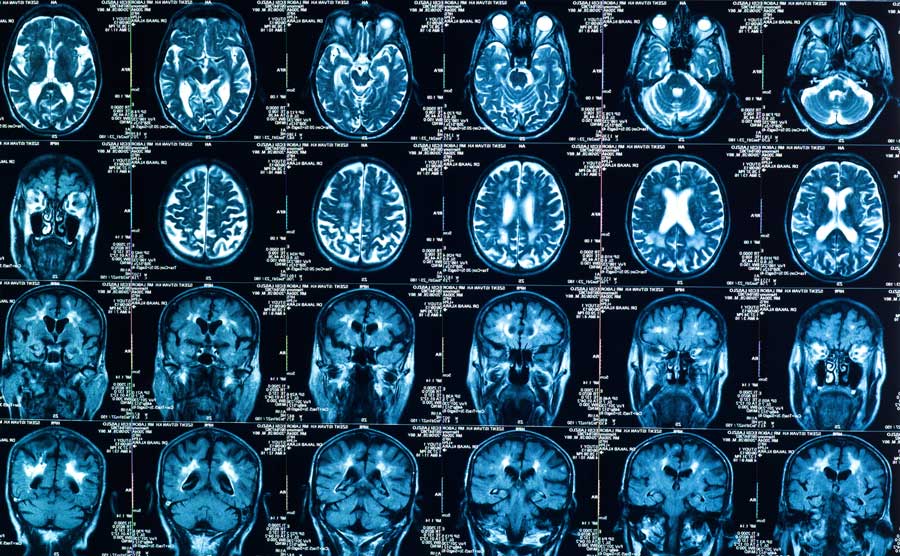 Evidence for this architecture
The idea that the brain is built of distinct but collaborating components has long been recognised and is backed by extensive empirical support. Reports summarising results of neuroimaging data have provided clear support for the continuum between domain-specific and domain-general processes in the brain, demonstrating that individual neural regions perform distinct functions and interact with different regions in different contexts, depending on the demands of the task at hand. Further research has shown that a neural network can be represented as a collection of nodes and edges, which stand for brain structures and their connections. Structural and functional connectivity studies have found that each brain structure forms part of a distinct network of hierarchical connections with other neural structures, which allows the brain to optimise the delicate balance between local, specialised processing and global brain function. Notably, animal studies have also demonstrated that a hierarchical structure is a characteristic feature of the mammalian brain.

How and why do humans think and act in the ways that we do?

The way the brain works
The strongest evidence in support of the proposed brain architecture comes from predictive coding approaches in neuroscience, alongside studies based on graph theory in network neuroscience. This provides a functional explanation of the brain’s hierarchical structure. More specifically, the predictive coding paradigm proposes that the brain is an inference machine, which tries to improve its predictions about the world by reducing discrepancies between what it expects and what it experiences. According to this perspective, the brain literally embodies a hierarchy of hypotheses about the world based on evolutionary imperatives and experiential, learned observations, which are thought to be encoded by specialised, deep pyramidal cells. The brain also contains information about prediction errors, encoded by superficial pyramidal cells, which are used to revise expectations in a bottom-up fashion. The relative influence of descending predictions versus ascending error signals is fine-tuned by their ‘precision’, which arises from cognitive processes such as attentional selection and sensory attenuation that ensure that individuals aren’t perpetually registering and responding to all of the stimuli they receive.

The origins of the brain
The evolutionary systems theory upon which the HMM rests proposes that the brain is a complex adaptive system that has emerged from the influence of selection acting on the dynamics of human phenotypes over different timescales. Primitive, highly specialised regions that occupy the lowest layers of the cortical hierarchy have emerged from the influence of natural selection over evolutionary time; epigenetic influences and cultural evolution shape neural dynamics over generations; individual differences in neural form and function arise over the course of development; and different patterns of cognition and behaviour emerge from neural mechanisms that respond flexibly to different contexts. On the one hand, this means that the brain comprises ancient, relatively ‘domain-specific’ regions that reflect adaptations canalised by natural selection; on the other, it comprises relatively recent, highly integrated or ‘domain-general’ networks that are highly plastic, sensitive to developmental change, and allow us to learn about, and respond flexibly to, our ever-changing environments. In this way, evolution and development operate together in order to refine our neurocognitive predictions about the world, and by extension, improve our ability to reduce our uncertainty or surprise.

The HMM and depression Badcock’s group has applied this model to depression, starting by considering depression as an adaptive trait.

To illustrate, Dr Badcock’s group has applied the HMM to depression, starting by considering our capacity for depressed moods as an adaptive trait. Although they acknowledge that depression is a heterogeneous condition that results from a range of causes, they propose that the mild-to-moderate levels of depressed mood that we all experience from time to time can be broadly described as an adaptive trait that occurs when individuals are particularly vulnerable to adverse social outcomes, such as rejection, defeat or loss. Here, they draw from wide-ranging evidence that satisfies all four of Tinbergen’s questions to suggest that depression reflects an evolved, ‘risk-averse’ strategy that responds adaptively to noxious social conditions
(e.g., exclusion) by minimising the likelihood of unpredictable interpersonal exchanges. It achieves this evolved function by causing adaptive changes in perception, like increasing a person’s sensitivity to social risks, and action, like social withdrawal and help-seeking. The basic idea here is that depression reduces our uncertainty about the social world by ensuring that we behave in ways that attract support and avoid conflict or unpleasant surprises. As predicted by the HMM, there is ample research to show how this depressive state depends on hierarchical interactions between distinct regions in the brain, many of which are responsible for processing social threat and reward.

Looking forward
While the HMM is a step toward integrating existing knowledge into a comprehensive theory explaining the most complex system known to man, its development has only begun. The scientific value of this theory ultimately depends on the hypotheses and evidence it generates. Central to the HMM is the need to develop testable hypotheses that bring together insights spanning the manifold sub-disciplines of psychology with theories and methods gleaned from neuroscience. Bridging these transdisciplinary divisions has long been a challenge, but Dr Badcock and his colleagues hope that their model lays a new foundation upon which to build.

What do you consider the biggest challenge in integrating research from this many different and highly-specialised domains?

The most difficult challenge lies in our attempt to provide a unifying and highly theoretical model of the brain that actually motivates other researchers to take it up for their own purposes. Otherwise, there are two main obstacles at play. The first of these is theoretical, and stems from the need to develop evidence-based hypotheses that span the breadth of psychology, along with relevant research in neuroscience. To test such hypotheses, the second challenge is methodological – it requires computational and imaging methods in neuroscience to be wedded more closely with experimental, questionnaire and observational methods in psychology.

Explaining how the mind works: A new theory was last modified: November 15th, 2022

Dr Badcock has a PhD in Psychology and is a senior lecturer and theoretical psychologist working at The University of Melbourne. He specialises in evolutionary systems approaches to psychology; mood and the affective disorders; and adolescent psychopathology. He also coordinates the graduate online programs offered by The University’s Centre for Youth Mental Health.

Dr Badcock and colleagues have formulated a theory of the brain, the Hierarchically Mechanistic Mind, which aims to explain the structure, function, and dynamics of the human brain.

Funding for Professor Karl J. Friston and open access rights for several papers on this project are courtesy of the Wellcome Trust.

Pathogenic microorganisms targeted by complex cellular communications
Biology
Read This Article
Do we feel free when we make hard decisions? A psychological perspective on feelings of freedom in decision-making
Behavioural Sciences
Read This Article

2 thoughts on “Explaining how the mind works: A new theory”