The SIDS-Critical Diaphragm Failure (SIDS-CDF) hypothesis posits that all SIDS risk factors either increase the workload of the diaphragm or reduce its force-generating capacity, and that while SIDS has many contributing factors, it has one cause, namely the failure of the vital respiratory pump. Several SIDS risk factors can impair diaphragm function, but especially noteworthy are the prone sleeping position and non-lethal infections. However, there is also genetic evidence that implicates respiratory muscle dysfunction in SIDS. Functionally disruptive variants of the gene SCN4A that encodes for the NaV1.4 voltage-gated sodium channel in skeletal muscle are overrepresented in SIDS cases and are known to impair normal respiratory function in infants.

Sudden infant death syndrome (SIDS) is defined as the sudden and unexpected death of a seemingly healthy infant. By definition, SIDS is a diagnosis of exclusion, and despite five decades of intense research effort, the cause of death is unknown. In developed countries, SIDS remains a leading cause of post-neonatal death for infants aged six months and younger.

In 2011, Mr Pontus Siren – an independent researcher based in Switzerland – advanced the SIDS-Critical Diaphragm Failure (SIDS-CDF) hypothesis to explain the underlying cause of SIDS. The hypothesis highlights that the diaphragm is a vital organ that must continuously generate adequate force to maintain ventilation and posits that diaphragm failure is the terminal event and the cause of death in SIDS. Mr Siren postulates that all SIDS risk factors either increase the workload of the diaphragm or reduce its force-generating capacity, and that while SIDS has many contributing factors, it has only one cause, namely the failure of the vital respiratory pump. The possible role of the diaphragm in SIDS has been largely ignored by researchers; in the past 50 years, only 60 articles on SIDS in association with the diaphragm have been published on PubMed (from a total of over 12,600). However, there is a growing body of evidence detailing how a broad range of SIDS risk factors can negatively impact the respiratory pump.

The diaphragm that powers the vital respiratory pump has not been adequately investigated in the context of SIDS with only 60 PubMed articles published in the past 50 years.

A 2018 Lancet study by Männikkö et al highlights for the first time that functionally disruptive genetic variants that encode for skeletal muscle excitability are a risk factor for SIDS. Variants of gene SCN4A are over-represented in SIDS cases compared to ethnically matched controls but only a small portion, four or 1.4% of the 278 infants, in the SIDS cohort had the genetic disorder. This suggests that the disruptive variants are a contributing factor rather than the cause of SIDS, and as the research team points out: ‘[the] data are consistent with the notion that risk factors combine to increase the probability of SIDS occurring but may not be the sole cause of death.’ Mr Siren has argued that SIDS has many contributing factors that either increase the respiratory workload of the diaphragm or, as is the case with the SCN4A variants, decrease the force-generating ability of the respiratory muscles. He suggests that SIDS risk factors can, in various configurations, contribute to the failure of the vital respiratory pump and SIDS. However, SIDS typically occurs only if multiple risk factors manifest simultaneously. The SCN4A variant can contribute to diaphragm failure and SIDS in combination with other factors such as non-lethal infections, the prone sleeping position, hyperthermia, cigarette smoke, hypomagnesemia, and altitude, to name a few.

Genetic evidence for the role of skeletal muscle dysfunction in SIDS

The Lancet study points out that 1 in 100,000 infants have a genetic disorder that affects the NaV1.4 voltage-gated sodium channel in skeletal muscle. This channel is encoded by the gene SCN4A and is critical for the action potential and excitation of skeletal muscles. Infants with functionally disruptive variants experience recurrent episodes of respiratory muscle myotonia and associated apnoea, hypoxia, and cyanosis. The genetic disorder can manifest as both gain-of-function and loss-of-function in the SCN4A gene, and both can negatively impact the respiratory function in infants. The disorder is likely to impact fast twitch respiratory muscles because the ability of muscles to maintain the amplitude of successive action potentials is dependent on the normal function of the sodium channels. Interestingly, the study also highlights that the baseline respiratory function of affected infants can appear normal, but that the SCN4A variants impact the ability of respiratory muscles to maintain normal ventilation in response to hypoxia. It’s noteworthy that there is compelling evidence to suggest that hypoxia plays an important role in SIDS. 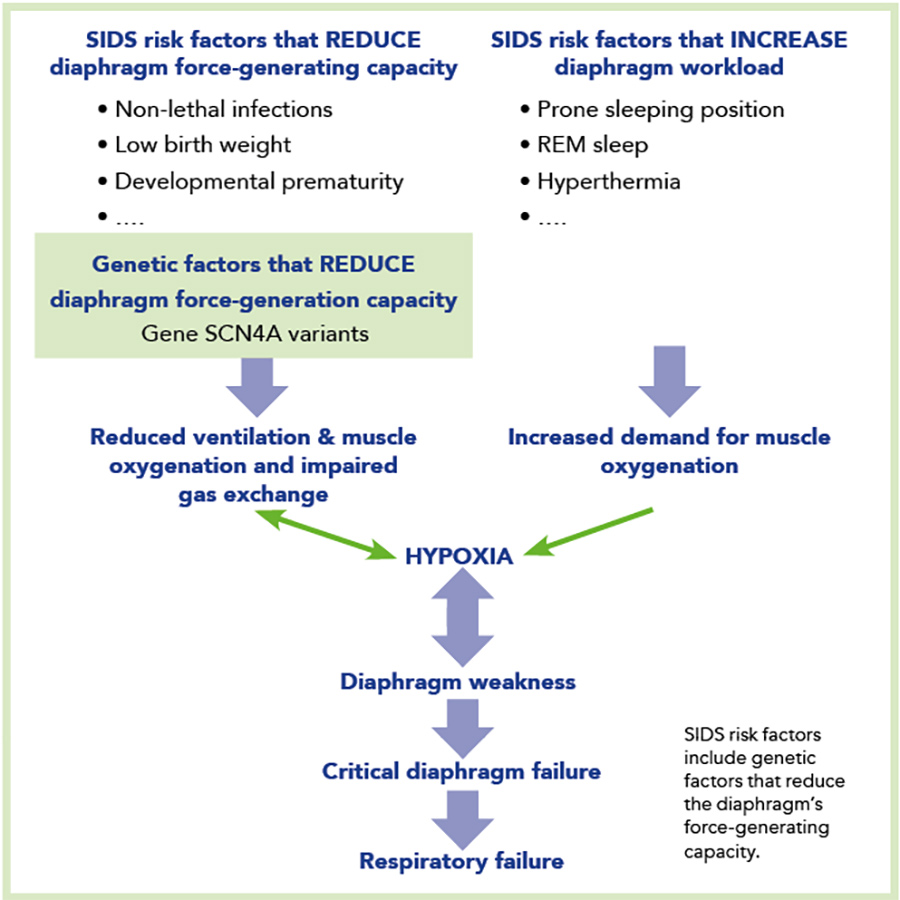 Mr Siren has argued earlier that all SIDS factors either reduce the diaphragm force-generating capacity or increase its workload and that both can contribute to hypoxia and, in some situations, critical diaphragm failure (CDF). Hypoxia in turn produces reliable biochemical markers that have been measured in SIDS victims and that suggest a prolonged hypoxic episode often precedes death.

Our data are consistent with the notion that risk factors combine to increase the probability of SIDS occurring, but may not be the sole cause of death. Lancet 2018

A large body of animal and clinical evidence shows that hypoxia exacerbates diaphragm fatigability and can significantly impair the diaphragm’s ability to generate force due to poor muscle tissue oxygenation. Several animal models have shown that hypoxic stress results in significant diaphragm weakness and impairs the muscle’s capacity to generate force. In humans, hypoxia can impair the overall function of the diaphragm and abdominal muscles and contributes to respiratory failure. The Lancet study highlights that functionally disruptive SCN4A variants can impair the ability of respiratory muscles to respond to hypoxia and that this could explain why infants with SCN4A variants are overrepresented in the SIDS cohort. This explanation is aligned with the SIDS-CDF hypothesis which posits that factors that impair respiratory muscle function can increase the risk of SIDS by contributing to the self-reinforcing feedback loop characterized by impaired diaphragm function leading to hypoxia and impaired diaphragm function that can result in critical diaphragm and respiratory failure.

The evidence presented in the Lancet study identifies another possible contributing factor, the functionally disruptive variants of the gene SCN4A, to critical diaphragm failure. The study provides novel genetic evidence that links respiratory muscle dysfunction and SIDS and highlights the need to investigate the diaphragm in the context of SIDS. It is important to note that correlation does not imply causation, and that the data discussed here does not prove that CDF causes SIDS. However, together with data on the impact of other SIDS risk factors on diaphragm function, the genetic evidence discussed here provides correlational data for the hypothesis that respiratory muscle failure is the underlying cause of death in SIDS.

Given that the disruptive SCN4A variants were overrepresented in the SIDS cohort compared to ethnically matched controls, that these variants directly affect respiratory muscle function, and that after decades of research there is no commonly accepted explanation for the cause of death in SIDS, the possible role of the diaphragm and CDF in SIDS should be investigated. The SIDS-CDF hypothesis offers a novel research avenue to help explain, or exclude, the role of respiratory muscles in SIDS.


SIDS has been investigated for over six decades, and every major organ except the diaphragm has been extensively studied in the context of SIDS. Considering the scope and breadth of this effort, our inability to identify the underlying cause of death, and the increasing amount of evidence that implicates respiratory muscle failure in the syndrome, we need to consider if there is a blind spot in the conventional research approach. There are many compelling reasons to investigate diaphragm’s possible role in the syndrome and no good reasons to exclude it from SIDS research. The Lancet study presents additional evidence that suggests skeletal muscle dysfunction may contribute to the increased the incidence of SIDS. The diaphragm remains a collective, and potentially consequential, blind spot in SIDS research.
Genetic evidence implicates respiratory muscle dysfunction in SIDS was last modified: November 2nd, 2022 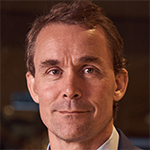 Pontus Siren is an independent researcher based in Switzerland.

Pontus Siren highlights new genetic evidence about the possible role of respiratory muscles in the etiology of SIDS and emphasizes the imperative to investigate the diaphragm in the context of SIDS.