Physical Sciences
Chemical production can be fraught with hazards. From explosions to toxic chemicals, making useful molecules often requires careful thought about how to make a process inherently safer. Researchers at RCPE (Austria) have developed an ingenious way to use the automated flow reactors manufactured by Corning SAS (France) to safely harness the photochemistry of bromine – a highly toxic, sludge-brown substance that can be used to make some of the most useful chemical bonds for pharmaceutical production.

Chemical synthesis is big business. The chemical industry worldwide is worth over $3 trillion and much of its value comes from the production of chemical compounds. These compounds may come in the form of extraction from natural resources, such as oil refining, where valuable chemicals are extracted from crude oil, or combining different chemical species in reactors to produce new products.

Many high-value chemicals are made from reagents that also have to be synthesised themselves and involve complex multi-step processes. Another challenge for chemists to make new chemical species is that many chemicals often need coercing to react in the form of high temperatures, pressures, or the use of very harsh reagents such as concentrated acids.

Industrial synthesis can be carried out in a variety of ways. One approach is batch processing, where a reaction is set up, left to run, the products are removed, and a new batch is started – much like how the brewing process is performed for alcohol production. Another is flow chemistry, where the chemical reagents are constantly mixed, reacting and producing new chemical species.

Flow reactors can be a brilliant way to produce high yields of chemicals, particularly for special types of reactions, such as those that need to be triggered by light (known as photochemical reactions). However, both flow reactors and photochemistry have not been widely adopted by the pharmaceutical industry due to the challenges of finding methods to scale up chemical reactions to produce the large quantities of products needed. This has meant that, to date, most reactions that use these technologies and methods have been limited to lab scale.

To remedy this, researchers at the Research Center Pharmaceutical Engineering (RCPE) in Austria, in collaboration with Corning® Advanced-Flow™ Reactors, France, have designed a highly optimised reaction procedure using a flow reactor for light-triggered reactions, that can be scaled up to produce industrial quantities. This process, which runs in a reactor roughly the size of an A4 piece of paper, is highly efficient: if left to run continuously, it is conceivable that it may meet a significant portion of the world’s demands for a particular pharmaceutical intermediate all by itself.

Light is a renewable energy source and, unlike concentrated acids and alkalis, does not generate waste that needs to be dealt with afterwards.

Chemistry with light
Light is a powerful tool for chemistry, exploited both by nature and by scientists in the lab. Photochemical reactions, or reactions triggered by light, are at the heart of photosynthesis, the process that converts solar energy to plant food and oxygen for us to breathe.

What makes light a powerful chemical reagent is the energy it can provide. Rather than vigorously heating a molecule to make it react, absorbing a single packet of light energy known as a photon can also trigger a reaction. Sometimes the light-driven chemistry of a molecule can be very different to what happens when it is heated, opening many new exciting reaction possibilities.

Researchers at RCPE and Corning SAS are also excited by the environmentally friendly possibilities offered by photochemical reactions. Light is a renewable energy source and, unlike concentrated acids and alkalis, does not generate waste that needs to be dealt with afterwards. It is safe to handle and often allows for ‘gentler’ reaction conditions that are not so energy intensive as needing to heat large vats of chemicals.

With the advent of powerful, reliable light-emitting diodes (LEDs), industrial photochemistry has now become easier than ever. Corning’s range of flow photoreactors incorporate these LEDs in a highly engineered manner, to create a platform for synthesising many chemical products in an efficient way. Scaling up photochemical synthesis to industrial levels poses some unique challenges: as the reactors get bigger, it is harder for the light to reach the middle of the vessel and trigger the desired chemistry in the whole batch.

A significant portion of the work done by RCPE was finding optimal reactor setup and conditions that would not just facilitate photochemistry in the lab but could be adopted on an industrial scale. With the combination of carefully tuned chemistry and a suitable reactor, they have been able to achieve several remarkable things for a target reaction: eliminating the need for organic solvents, recycling the acidic reagent reducing waste and increasing safety, all while achieving process intensification.

Radical bromine
The reaction focused on in this study involved a famously hazardous chemical reagent, bromine (Br2). While formally a liquid at room temperature, it readily evaporates to form an ominous brownish-red gas. While not as toxic as its more famous chemical counterpart chlorine, it is still very harmful to human health and lethal in reasonably small doses. To trigger carbon-bromine bond formation in synthesis, light is also added to the mix to trigger the breakage of the bromine-bromine bond to form two even more reactive bromine radicals.

This photochemical flow procedure is an important demonstration of how photochemical reactions can be scaled up to
industrial levels.

Bromine is a chemist’s best friend in the synthesis of many pharmaceutical drugs, agrochemicals, and advanced materials. This has prompted research into ways to utilise bromine, whilst avoiding transport and storage of the reagent itself. Rather than adding toxic bromine to their flow reactors for such reactions, the team has developed a system to generate the needed bromine in situ. The bromine is formed continuously as it is needed. This means all the bromine is consumed in the chemical reaction and no harmful reagents are left over.

Heart-shaped science
Getting the reagent, the reaction for bromine, and adding the light all at the right time in the right amounts is a tricky balancing act. To make the reaction occur, the starting material and bromine need to be mixed very well. As they are naturally immiscible, much like oil and water, this is rather difficult.

To do this, the team utilised Corning’s highly engineered heart-shaped fluidic module design that enables very high flow rates to create a highly turbulent environment where all the necessary chemicals can meet. Using powerful LEDs means that precisely as all the reagents are mixed, the breakage of the bromine bond can be triggered, and the final products formed. The team started their initial tests on a small scale with a 3 mL reactor and spent many months tuning parameters, such as the reaction temperatures and pressures to find the optimal conditions for maximising product yield. Once they had found a methodology that worked, the RCPE researchers, with the help of Microinnova GmbH, could relatively quickly scale up this reaction to work in a 50 mL reactor, capable of producing 4 kg of product in an hour. Their approach is a new and exciting way of doing old chemistry efficiently, effectively and in a more environmentally friendly fashion. This was also a breakthrough in demonstrating the viability of taking the reaction optimisation for photochemical flow reactors from lab scale to work on larger reactors toward large-scale manufacturing.

As well as proving a highly efficient route to manufacture specific drug intermediates in an inherently safe and automated way, this photochemical flow procedure is an important demonstration of how photochemical reactions can be scaled up to industrial levels – something that has proved very difficult in the past. Having alternative synthesis tools, which open new chemistry while being more environmentally conscious and energy efficient, is an exciting prospect for the future of industrial synthesis and the team have demonstrated how the combination of flow and photochemistry is an excellent option for pharmaceutical manufacture on the industrial scale.

What are the challenges to overcome so photochemistry can be more widely used in chemical synthesis?

<> When shining light on a reactor, this light will often all be absorbed within a few millimetres. This means that doing photochemical reactions in large reactors, as is usual for chemical manufacturing, is very challenging, since the reactions behave completely differently compared to reactions performed in the development lab. We use flow chemistry to overcome this challenge by flowing our reaction mixture through a channel of just above one millimetre depth, meaning that it can all absorb the same amount of light. This makes things easier, but we still need to change reactor dimensions to make more material, which remains a challenge.

Harnessing the photochemistry of bromine for sustainable manufacturing was last modified: December 22nd, 2020 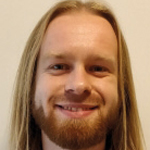 Jason D. Williams studied Chemistry at the University of Sheffield, before undertaking a PhD on the GlaxoSmithKline/University of Strathclyde collaborative scheme, supervised by Prof William Kerr. Since 2018, Jason has worked with Prof C. Oliver Kappe in the CC FLOW consortium, focusing on flow photochemistry and real-time reaction analysis.

After earning his PhD in Organic Chemistry from Orsay University Paris XI in 2007, Guillaume Gauron worked as an R&D radiochemist at IBA Molecular (Cis Bio) from 2008 to 2014 before joining Corning Reactor Technologies as an Application Engineer. In 2018, Guillaume accepted the role of EMEA Technical Sales Manager.