Biology
Forces shape the world we live in, including the bodies we grow in to. Tiny motors in our cells push and pull to create different shapes, surrounding cells respond and react to create diverse patterns of tissue resulting in a world full of unique plants and animals. Drs Sugimura and Ikawa, from Kyoto University, studied the Drosophila fly wing to uncover the components involved in resisting and responding to external force, resulting in a beautiful cellular honeycomb arrangement.

You probably don’t think all that much about forces. You probably didn’t have to think about whether the chair you are sitting in would support you or whether the building you work in would keep its shape. But a mechanic or engineer has put a lot of thought into designing these things. Each part has to be carefully assembled out of the correct material to ensure you don’t topple off your chair or the building doesn’t cave in. It’s easy to think about forces in something you might build but what about the forces inside your body?

You and I, and all the other living things on the planet, are made up of cells. When a human infant develops, forces act between tens of trillion cells to shape our bodies. If you think of an animal off the top of your head, the likelihood is that they are a very different shape and size to you. We live in a world full of diverse animals and plants; to understand how these different forms arise we need to understand the forces underlying development. We need to look at the mechanics of nature.

Imagine two judo players in a wrestling match. They push and pull one another and use force to try and win. They also respond to each other – a pull from one player may result in a push from the other. Just like the judo players, cells push and pull during development to create shapes and patterns. Within the cell, proteins are hard at work generating forces whilst cells communicate to each other through mechanical movements. Cells also sense and respond to their environment just like the judo players.

The understanding of force generation within cells and tissues has evolved in the last decade. However, much less is known about how cells are able to respond to forces during development. This mysterious area of research has been pursued by Dr Kaoru Sugimura and her colleagues, Dr Keisuke Ikawa from Kyoto University and Dr Shuji Ishihara from the University of Tokyo, who have heroically uncovered the developmental story of wing cells in Drosophila flies.

Honeycomb wings
When Drosophila are in the pupal stage of development, the larva is changing (metamorphosing) into an adult fly. During metamorphosis, the cells rearrange their positions to create adult fly tissue. Mechanical forces push and pull cells and chemical signals trigger cell movement and changes in configuration. Cells respond in many different ways to the mechanical force, including elongation, increasing elasticity and directional cell rearrangement. This is where cells rearrange by changing the contact they have with the cells around them. In the Drosophila wing, directional cell rearrangement causes the cells in the wing to align in hexagons, forming a beautiful honeycomb structure.

As the Drosophila wings deform in concert with the hinge (where the wing connects to the body) the tension of the tissue increases, causing the wing cells to elongate and stretch out horizontally. This tissue tension pulls the cells into contact with surrounding cells. The contact point with these other cells is known as a cell junction. At the cell junction forces act to counterbalance the tension of the tissue. If this tension is not resisted the cells would be pulled apart. Stabilising the balance of external tension and internal forces allows the cells to comfortably rearrange into a hexagonal shape. Sugimura and her colleague, Ishihara, neatly unravelled all these factors at play, but there is more to be understood – what generates these resisting forces in the cell? Sugimura dug deep into the cell to find the individual molecules within the cell that were involved in this process.

…these forces cause the cells in the wing to align in hexagons, forming a beautiful honeycomb structure…

Actin
Actin is a protein found in most cells in the body. It’s important for muscle contraction, for movement and division of cells and giving cells their shape. Actin senses and resists forces, and can react and respond to the mechanical environment by altering its elasticity or changing its structure.

Actin exists in two forms – fibrous and globular. The small globular actin proteins come together to form a chain or fibre. In its chain form it’s useful for all sorts of things including shaping and moving cells! Actin could also be involved in the organisation of lots of cells within a tissue because actin is connected up between cells through special junctions called adherens junctions.

Actin can only change its structure with the help of other proteins called actin-binding proteins, like AIP1 and cofilin. Because of actin’s ability to sense and resist forces, Sugimura and Ikawa studied whether these proteins could be involved in cell rearrangement in the Drosophila fly wing tissue. Other studies have shown that AIP1 and cofilin are important for causing changes in actins shape and behaviour in vitro, so was a great place to start exploring further.

Actin’s colleagues
Sugimura and Ikawa started by identifying AIP1 in the wing cells using a fluorescent protein tagged onto AIP1 so they could see exactly where it was in the cells. They found it was mainly located at the vertical sides of the elongated cells (picture a cell being stretched, like a horizontal baguette, and imagine the two short curved sides or ends of the baguette, these are the vertical sides; aka AP junctions). As the wing cells are being stretched it seems to make sense that forces to resist the tension during cell rearrangement would originate from the AP junctions. However, Sugimura and Ikawa previously found other forces at play at the elongated horizontal sides resisting the tension.

…AIP1 and cofilin are like peanut butter and jelly – they work better together.

AIP1 has a partner in crime – cofilin. Without cofilin, AIP1 only weakly binds to actin, having little effect on changing its behaviour. Sugimura and Ikawa found that when cofilin was disrupted, AIP1 was no longer localised to the AP junctions and when AIP1 was disrupted, cofilin changed its localization. Seems like AIP1 and cofilin are like peanut butter and jelly – they work better together.

Myosin and Canoe/Afadin
It turns out that it’s not just AIP1 and cofilin involved in resisting the tissue tension, there are other proteins that are vital to prevent the cells being ripped in two. Sugimura and Ikawa investigated myosin, a motor protein previously shown to be involved in regulating cell rearrangement. Actin and myosin often work so closely together that even their names have merged. Actomyosin is the name given to networks of actin and myosin that work together to facilitate, amongst other things, cell movement and stability. The researchers here identified an important role for actomyosin in cell rearrangement. They found that actomyosin requires AIP1 to function correctly. When AIP1 was disrupted myosin fibres were disfigured into circles but this didn’t occur when AIP1 was present. The researchers also identified Canoe/Afadin as an important protein for connecting actomyosin to the adherens junction so that when actomyosin moves it pulls the cell membrane with it. Without any one of these proteins the cells don’t rearrange in the right way, leading to mismatched shapes and irregular hexagons in the wings.

Bringing it together
Building on their findings, Sugimura and Ikawa have put together a chain of events suggesting how cells respond to tissue tension resulting in cell rearrangement. The tissue tension causes actin to twist at the AP junctions, this twisting allows cofilin to bind to actin. Cofilin causes AIP1 to arrive at the AP junctions, the combination of the AIP1 and cofilin (peanut butter and jelly) results in actin turnover maintaining the Canoe/Afadin link between actomyosin at the adherens junction. This resists the tissue tension that would otherwise break the cells in two. Now these mechanisms have been uncovered, Sugimura and Ikawa are keen to conduct further experiments to reveal their importance in other developmental contexts. 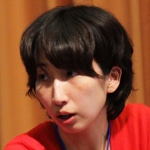 Kaoru Sugimura received her PhD from the Graduate School of Science, Kyoto University in 2006. She is a currently an associate professor at WPI-iCeMS, Kyoto University. Sugimura uses a wide range of techniques, including live imaging, Bayesian statistics, and physical modelling, to understand the mechanisms by which mechanical forces shape the body.