Physical Sciences
Ask many astronomers, and they will tell you that gravitational waves are the greatest scientific discovery of the 21st century so far. In his research, Miguel Holgado at the University of Illinois studies the clever astronomical techniques which can be used to observe the very largest of these elusive ripples, originating from supermassive black holes as they orbit around each other. His results suggest that these binaries are likely far rarer than astronomers originally thought, but could also help them to refine their observation techniques.

In September 2015, the world of astronomy was changed forever, as ripples in spacetime, first theorised by Einstein over a century ago, were directly observed for the first time. The gravitational wave, discovered by a global team of researchers at the LIGO-Virgo collaboration, was created as two black holes spiralled into each other and merged, releasing colossal amounts of energy.

Using kilometre-scale interferometers, accurate to within the widths of single atoms, physicists picked up the wave as it passed through Earth, minutely stretching and squeezing the fabric of spacetime as it went. Nearly a dozen more gravitational wave observations have been made since then, and again this year, astronomers are turning their attention to detecting mergers of black holes, neutron stars, and more.

Limitations in LIGO’s detections
So far, every gravitational wave LIGO has detected has originated from mergers of black holes and neutron stars with similar masses to our sun. However, astronomers predict that far larger waves could originate from ‘supermassive’ black holes – objects many millions of times heavier than the Sun, which are thought to occupy the centres of many galaxies.

As Holgado explains, these waves can form when two galaxies merge together, causing each of their supermassive black holes to orbit each other. ‘Some of the loudest gravitational waves are expected from the orbital motion of supermassive black hole binaries that may form within the centres of merged galaxies,’ he says. Yet despite their enormous size, these waves are notoriously difficult to detect. Where the ripple observed by LIGO-Virgo in 2015 dramatically completed a cycle in fractions of a millisecond, those waves from supermassive black hole binaries with periods of years to decades can endure for thousands to millions of years.

‘LIGO cannot detect gravitational-waves from these sources because the frequencies from in-spiralling supermassive black hole binaries are expected to be of order nanohertz,’ Holgado continues. ‘LIGO is only sensitive to gravitational wave frequencies of order tens to thousands of hertz, which mostly correspond to the mergers of stellar-mass black hole binaries and neutron-star binaries.’ Astronomers have thus been relying on a different technique to detect nanohertz gravitational waves by exploiting the most reliable timekeepers known to astronomy.

Reliable astronomical timekeepers
Astronomers were baffled when they first discovered a number of mysterious objects which appeared to emit relentlessly regular flashes of high-energy radiation. The pulses kept time so accurately that some researchers were even drawn to extra-terrestrial explanations of their origin at first. However, as Jocelyn Bell and Antony Hewish famously discovered in 1967, these signals have a perfectly natural explanation.

The duo revealed that the pulses are actually beams of radiation, which are continually emitted from the poles of rapidly-rotating neutron stars – small, dense objects which were once the cores of massive stars. Once every rotation, one of these beams would point straight towards the Earth, resulting in a regular sequence of flashes from our perspective.

The pulses are emitted with unwavering uniformity like a highly precise metronome, but as Holgado explains, this could appear to change from our perspective if a pulsar signal with was affected by a gravitational wave. ‘If gravitational waves pass through a pulsar and the Earth, the observed pulse times-of-arrival are shifted due to the stretching and squeezing of spacetime,’ he says.

If gravitational waves pass through a pulsar and the Earth, the arrival times of the pulses are shifted due to the stretching and squeezing of spacetime.

Astronomers are now using these theorised shifts to monitor changes in groups, or arrays, of these distorted pulsar signals, over periods of several years. ‘In order to detect gravitational waves, we can time an array of pulsars and correlate the observed shifts of the pulse arrival times for each pulsar,’ Holgado continues. ‘A pulsar timing array (PTA) is a particular type of gravitational wave detector that is sensitive to nanohertz gravitational waves from supermassive black hole binaries.’

A growing list of binary candidates
This technique is vital for detecting low-frequency gravitational waves that LIGO is not sensitive to. However, observations of PTA signal shifts have yet to yield concrete evidence of the low-frequency ripples. All the same, researchers have now begun the search in earnest; paying particular attention to the dense, bright clusters of gas which collect at the centres of some galaxies.

‘Even though PTAs have yet to detect nanohertz gravitational waves, their upper limits are of astrophysical relevance and importance,’ Holgado says. ‘A number of telescopes have been finding and observing active galactic nuclei (AGN), which are the centres of galaxies that are observed to be very bright compared to normal galaxies due to a supermassive black hole feeding on hot gas.’

In several of these bright galactic centres, astronomers have found that the light they emit dips and rises at regular intervals. As Holgado explains, ‘some AGN have light curves that show some periodic behaviour, which is sometimes thought to come from the orbital motion of a supermassive black hole binary.’

If the orbit of the black hole binary is inclined relative to our perspective, then each black hole would routinely move towards and away us as they orbit each other. This motion relative to our line of sight would cause the bright material surrounding the black holes to become even brighter when the motion is towards us and to become dimmer when the motion is away from us. Another possibility is that if the orbit is completely face-on, i.e., no motion towards nor away from us, then the gaseous material can still fall into the black holes in a manner driven by the orbital motion of the binary. The rate at which the material falls into the black holes can increase and decrease on orbital timescales, and as this accretion rate changes, so does the luminosity of the gas that is falling in. Astronomers can, therefore, refine their search for nanohertz-frequency gravitational waves by pointing their telescopes at those periodic AGN positioned behind PTAs.

Using PTA upper limits, we have shown that only a small fraction of blazars may be binaries.

If astronomers are wrong about supermassive black hole binaries being the sole cause of periodic AGN, determining the proportion which are responsible for them could be vital for gravitational wave observations in the future. In his research, Holgado is working to determine just how many time-variable AGN can be explained by black hole binaries.

Detections in blazars
When AGN are particularly bright, they will release vast amounts of energy through colossal jets, which point perpendicular to the galaxy’s disc. AGN which display these jets are called ‘quasars’, and in special cases, they point straight towards Earth, making them ideal for our observation. The data gathered in observations of these special quasars, called ‘blazars’ is of particular interest to Holgado. ‘Blazars are a particular type of AGN whose jets are pointed directly towards us, making them particularly bright among AGN,’ he explains. ‘NASA’s Fermi Gamma-Ray Space Telescope has obtained the most complete census of blazars out to distances farther than what pulsar timing arrays can observe.’

Many blazars exhibit the light variations which caused astronomers to theorise supermassive black hole binaries in the first place, giving Holgado a highly-developed database of observations to work with. ‘Blazars are notorious for showing quasi-periodic behaviour in their light curves at a variety of wavelengths, which is also sometimes thought to be due to the presence of a binary,’ he continues. With this information, Holgado can use PTA upper limits on nanohertz gravitational waves to directly quantify the proportion of periodic blazars which may host binaries.

Limited evidence for supermassive binaries
So far, Holgado’s results have revealed that only a small fraction of blazars can host gravitational wave emitting binaries that would be consistent with PTA upper limits. This suggests that supermassive black hole binaries are responsible for a far smaller proportion of periodic AGN than astronomers originally thought. Instead, Holgado theorises that a majority of periodic AGN must consist of uneven distributions of light-emitting gas orbiting individual supermassive black holes.

‘Using PTA upper limits, we have shown that only a small fraction of blazars, around 0.01 to 0.1%, may be binaries, which means that the quasi-periodicity often seen in blazars is likely to be due to periodic motions of the hot gas surrounding the supermassive black hole,’ he explains.

Such a low fraction may be somewhat disappointing to some astronomers, but the result could prove vital in ensuring potential future observations of gravitational waves originating from supermassive black hole binaries are genuine. The constraints on the binary fraction also provide some insights into how efficiently supermassive black hole binaries from in the centers of galaxies. In the future, Holgado’s work could play an important role in our understanding of the dynamic ripples in spacetime which we now know to permeate our universe.

There is increased effort towards finding potential supermassive black hole binaries. With pulsar timing arrays improving their upper limits, you must be excited about the future in this field.

<> Very much so! Even without a direct detection of nanohertz gravitational waves, we can still do multi-messenger astrophysics, where electromagnetic observations from telescopes tell us about the possible presence of binaries from periodic AGN and gravitational-wave upper limits tell us what fraction of these binary candidates may be real. Once pulsar timing arrays finally detect nanohertz gravitational waves, we hope to gain a clearer picture of how supermassive black hole binaries form and how this is tied to the evolution of galaxies over cosmic time.

Refining the search for the largest gravitational waves was last modified: February 18th, 2021 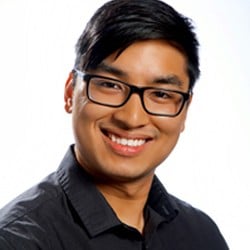 A. Miguel Holgado completed his undergraduate studies at Texas A&M University. He is now a PhD Candidate at the University of Illinois at Urbana-Champaign researching gravitational-wave astrophysics. Miguel will be attending the 69th Lindau Nobel Laureate Meeting, which will focus on Physics.

A. Miguel Holgado’s research focuses on the gravitational wave signatures of compact objects such as black holes, neutron stars, and white dwarfs.